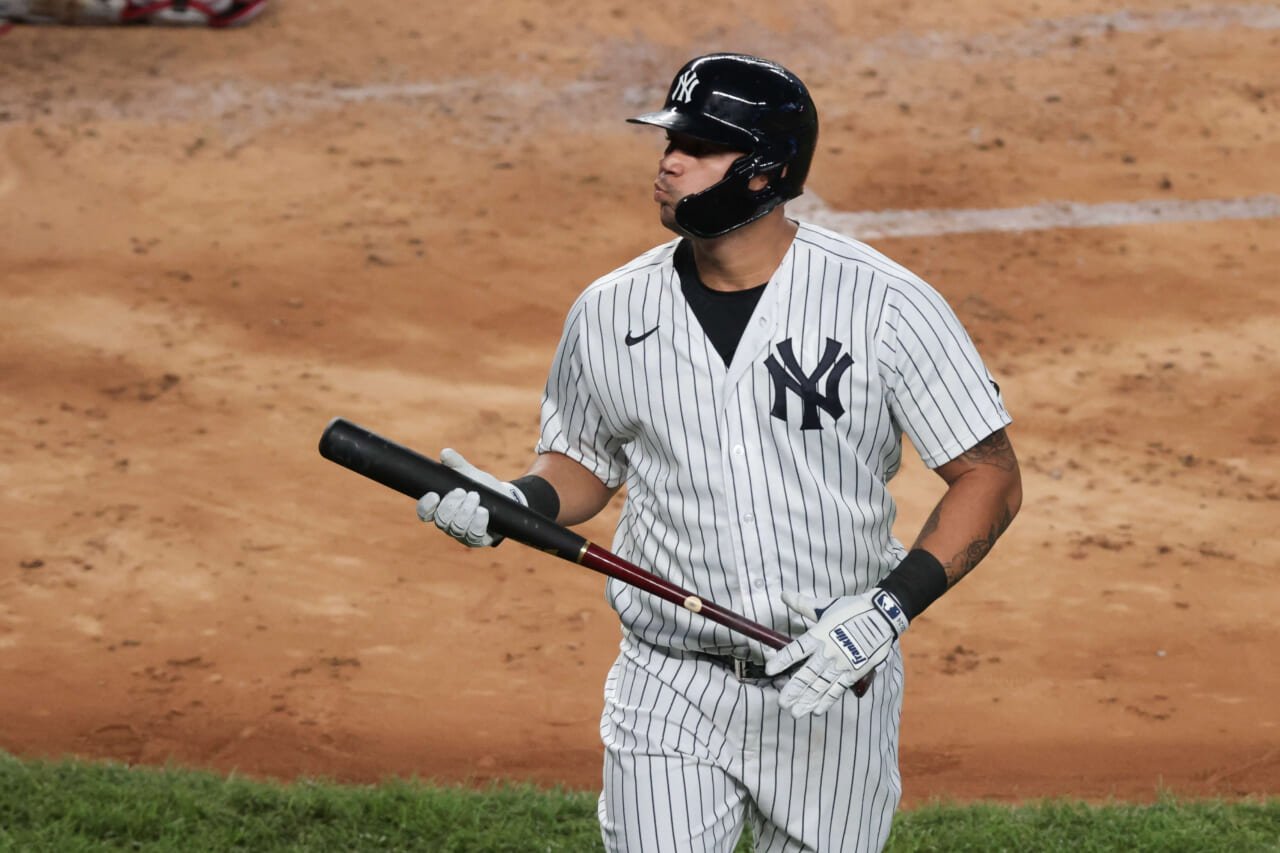 Without a doubt, New York Yankees catcher Gary Sanchez is one of the most controversial players. There are those that support him and those that hate him and believe his time with the Yankees is over.

The fact is that he is somewhere in between in his performance. Although he is not the greatest defensive catcher, the question remains if his power at the plate is good enough to ignore that.

Sanchez burst onto the scene in 2016-17, with a .289 batting average and 53 home runs in 175 games. But since then, he has not come close to those numbers. He has suffered several injuries and has been inconsistent at best on both sides of the plate.

For those who want Sanchez gone, look deep, and you will see a sustainable catcher. If you look across MLB, there aren’t that many catchers that hit better than he does. What causes most fan negativity is that we know his potential, and he is not achieving that.

Even though fans may not like him, they all want him to be better. The Yankee front office has remained committed to Sanchez as they tendered him again, giving him $7.5 million to stay in pinstripes for at least this season. However, if he stays a Yankee beyond, that is in question. He will become a non-restricted free agent at the end of this season. Much of his future has to do with the power he exhibits at the plate this season and whether it makes up for his lackluster defense. Let’s take a look at his baseball history.

On December 2, 1992, Orquidia Herrera gave birth to a baby boy down in the Dominican Republic. That boy was Gary Sanchez. His parents separated when he was young, and he, his three brothers, and one sister were raised by their mother and Grandmother, Agustina Pena. There is not a lot known about how Gary started in baseball, but we do know he played in the sandlots of the Dominican Republic and that he was discovered by Mark Newman, who was at the time the head of the Yankees farm system. At the Yankees training facility complex in Boca Chica, a 15-year-old Gary Sanchez impressed him. In a game, Gary, in just four swings, hit a homer to right, then to center, and then to left field.

At the age of seventeen in 2009, the New York Yankees signed Gary as an international free agent, giving him a $3 million signing bonus. After signing, he started playing with the Gulf Coast Yankees, but he was promoted to the Staten Island Yankees a year later. In 2010, he finished the season with a batting average of .329 with eight home runs and 43 runs batted in and was called one of the best prospects in all of baseball. He started the 2012 season with Charleston but was quickly promoted to the Tampa Yankees and eventually to the Trenton Thunder. in 2015, he was promoted to the Scranton/Wilkes-Barre Rail Riders. He got his major league appearance as a pinch hitter of October 3rd, where he went hitless in two at-bats. He played for the Arizona Fall League when the season was over, leading the league in home runs.

During spring training in 2016, Gary competed with Austin Romine for the backup catcher job, but Romine won out, and Gary started the season with the Rail Riders. The Yankees again promoted Sanchez to the major leagues on August 3, and he recorded his first major league hit that same day. On August 10, Sanchez went 4-for-5, with his first major league home run and three singles. On August 16, Sanchez had his first two home run games against the Toronto Blue Jays. Early in 2017, Gary served his first stint on the DL. Later in the year, he participated in the Home Run Derby, beating out Giancarlo Stanton 17-16 but losing to Miguel Sano.

Yogi Barra held the New York Yankee most home runs by a catcher record until Gary broke it with 31 in September. That same season, he received the Silver Slugger Award and tied for the most passed balls in the majors. In 2018 he was again on the DL and was out for a month. Also, he was criticized for lack of hustle and more passed balls during the year. After being on the DL twice, Gary played in only 89 games during the year. He finished the year batting .186 and got the award for the most passed balls in majors.

Gary in 2019, as in the past year, was again criticized for his lack of hustle and more passed balls. But on April 7th, Gary hit three home runs in the same game, but he quickly found himself on the IL again. After a few weeks, he returned to a stretch of 0-11 at the plate. He then hit the first grand slam of his career against the San Francisco Giants. During a game in July at Target Field, Sanchez again found himself on the IL, this time with a groin strain. He returned to the rotation much sooner than expected and as a different player. No more lack of hustle, no more passed balls and more home runs. The fact is that the trio of Sanchez, Romine, and Higashioka was the most potent catcher trio in the AL. As the season progressed, he found himself in a home run contest, with Gleyber Torres falling one short of Torre’s 38.

In 2020, Sanchez bottomed out, hitting only .147 with ten home runs, a season he certainly wants to forget. 2021 saw him improving, hitting .204 and playing in the most games since 2017, but he only drove in 53 runs. In both 2020 and 2021, he saw Kyle Higashioka replacing him in many games, including being the personal catcher for ace Gerrit Cole.

Sanchez lives with his wife Sahaira and their four-year-old daughter Sara in New York, but during the offseason, they love traveling. In the past few seasons, they’ve been to Costa Rica, Peru, and in this postseason to Hawaii. Sanchez has often said the birth of his daughter made him realize that he couldn’t squander his opportunity to be a big-league player. So, according to which side of the fence you’re on, you either think Gary doesn’t try hard enough, lacks the hustle, and is a failure as a catcher. Or you think he’s the best thing since sliced bread and a future Yankee great.

The facts are this: Sanchez is a better-than-average catcher with an accurate bullet of an arm that few base runners should challenge. According to pitchers, he calls an excellent game. He is a catcher that can hit home runs and lots of them. Gary is still young as a backstop and could very well be known in the future as one of the greatest Yankee catchers in history, rivaling Yogi and Thurman. As we watch Gary, the only thing we worry about is if he can stay healthy and can his hitting improve?