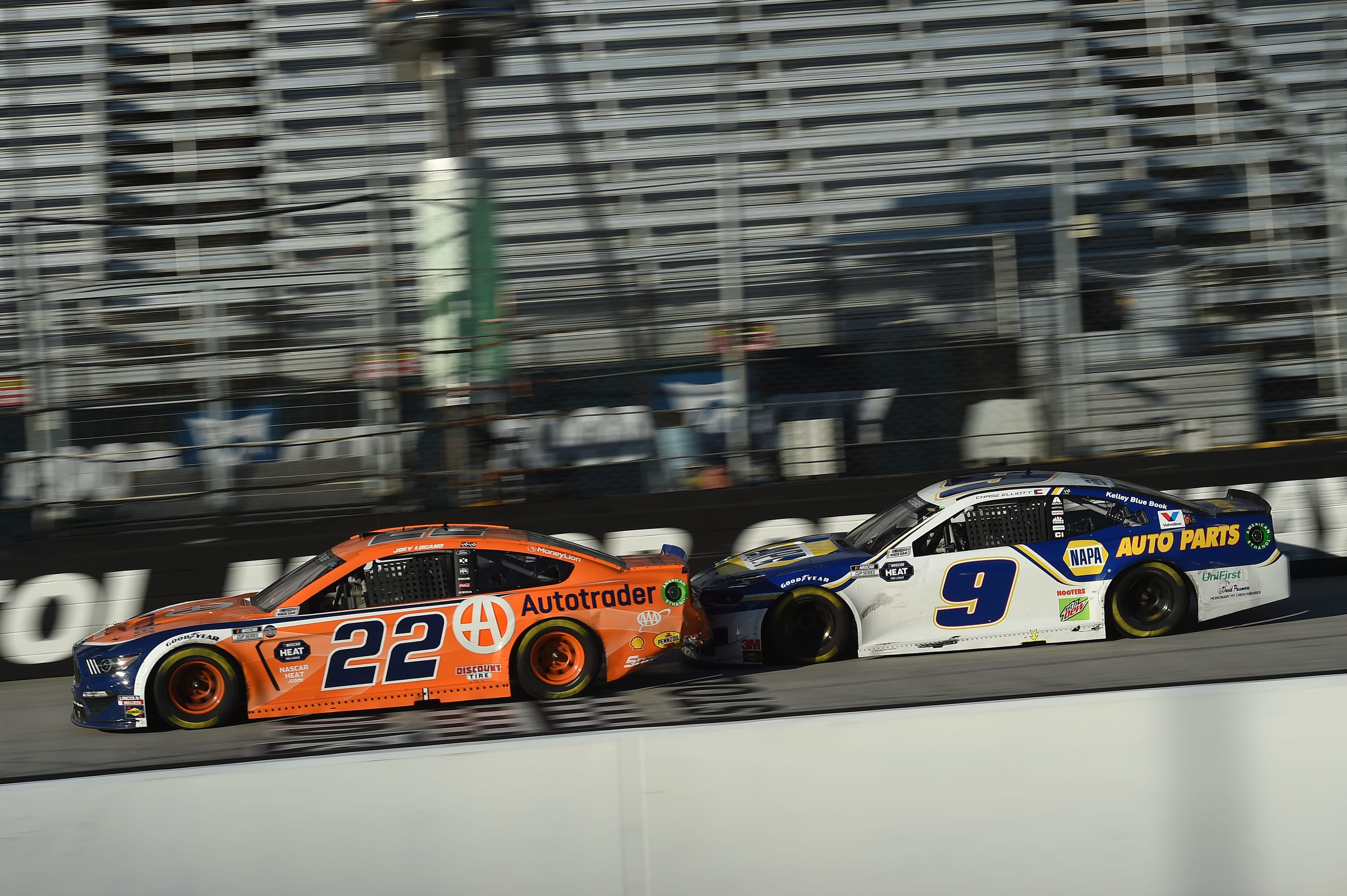 The course has been a bit bumpy, but NASCAR’s return to action can earn a proper salute during Wednesday’s All-Star exhibition.

Even when all is well, the art of the “All-Star Game” was becoming an endangered species.

The NFL’s Pro Bowl has been on life support for years, perhaps sustained by the concept of “hate-watching” normally reserved for reality shows. Winter showcases like the NBA and NHL have become increasingly gimmick-filled (via the “Elam Ending” and a divisional 3-on-3 tournament respectively) and are often remembered more for the weekend events that accompany them. MLB’s Midsummer Classic remains a tradition despite dilution via interleague play and free agency.

As for NASCAR, their upcoming exhibition showcase might be one of the brightest and most important nights in the circuit’s history.

Wednesday night will mark the 36th annual NASCAR All-Star event and the first at Bristol Motor Speedway(7 p.m. ET, FS1). It will be a celebration of racing and competition like no other, with a grand prize of $1 million due to the winning team. NASCAR is also set to welcome 30,000 of their closest friends to partake, as that limited number will be welcomed into the Tennessee-based stadium. Those who enter will witness just how far NASCAR has come in one of the most turbulent times in the country’s history.

The fact NASCAR is even able to stage such an event is a win on its own. Other leagues have not only scrapped their 2020 All-Star proceedings, but some are even willing to ditch the potential stagings in 2021 to complete modern seasons (the NHL, eager to not only finish this season but also play a full 82-game slate next year, seems most likely to do so). NASCAR is now holding an event that could be deemed “non-essential”, a race where only a large bag of cash is on the line.

Leading up to a fun event like the All-Star Race, NASCAR, its personnel, and its fans have had serious discussions that have perhaps avoided them for years. Current events seek racial justice and equality across the nation could’ve been swept under the rug, giving the drivers a chance to “shut up and drive”, if you will. NASCAR could’ve continued to simply frown upon continued usage of the Confederate flag, an emblem whose true, racist intentions and meanings have become more clear and well-known in recent years. It could’ve let Bubba Wallace, a rare African-American driver on the circuit, exist in an island setting, if only for keeping things “comfortable”.

But it simply refused to do so.

Not everything about NASCAR’s return and its desire for education and welcoming has been perfect. Their premature labeling of a hate crime against Wallace at the Talladega event was a (self-admitted) flaw in what was otherwise a right move to call in FBI investigators. When national protests against systemic racism began to rise across the nation, NASCAR addressed them and supported the endgame at a time when everyone would be watching: just prior to the green flag at Atlanta Motor Speedway’s 500-mile event in June.

Time will tell just how effective this new outlook will be. Inviting a select few thousand to Bristol could perhaps serve as a good barometer. But going into the All-Star proceedings, it certainly appears that NASCAR is in a far better place and holds a much better future than it did when COVID-19 forced a two-month pause back in March. The sense of unity and family was perhaps best displayed after the aforementioned Talladega incident. Even if the noose was determined to not be a hate crime against Wallace, the mere thought of a threat brought the community together. Prior to the 500-mile race’s invocation and national anthem, drivers pushed Wallace’s No. 43 Richard Petty Motorsports Chevrolet to the front of the field and let the world know that such hatred would not be tolerated on their watch.

“I want the weekend to be remembered by…I guess a good word would be ‘unity’, everyone coming together and showing support,” the Talladega winner Ryan Blaney remarked after the race. “I hate focusing on the bad things because that’s what gets a rise out of people  But I feel like what everyone has said the last day has really shown that it’s not going to be tolerated anymore. We’re all going to stand behind the people who are mistreated.  That just shows what a family we are. We’re competitors all on the racetrack, but at the end of the day, we’re one big traveling family. We’re going to support anybody who we compete with. If they get threatened in a way, we’re going to have their back.”

“I don’t want (Talladega) to be remembered as a terrible day or a bad day in NASCAR,” he continued. “I want it to be remembered as there was an incident and we all overcame it together, showed that we were not going to take it anymore, man. I’m getting sick of this (stuff). It’s not something that he should deal with.”

Speaking of operating during the ongoing health crisis, NASCAR’s ongoing efforts have allowed a grieving nation a rare semblance of normality. Along with golf, auto racing is perhaps the easiest sport adhere to social distancing mandates. It’s safe to say that NASCAR has taken advantage of the scenario

Even if they were only visiting while waiting for their usual favorites to return, a sports-starved nation has turned to NASCAR in this time of (admittedly small in the grand scheme of things) need. Things have, again, failed to be entirely clean. Several crew members of Stewart-Haas Racing were revealed to have tested positive, as did seven-time series champion Jimmie Johnson (who missed one race before testing negative twice in a 24-hour span to earn clearance to return).

But drivers have repeatedly stated that they feel safe in this process and hope such procedures will continue as the season continues to run through November.

“If any organization or sanction was to be ready for a challenge like this, I knew it would be NASCAR,” veteran Clint Bowyer said of the current health protocols. “We are a group that travels together and takes care of each other and looks after one another. Everybody knows everybody and in a time like this when you really have to hunker down and watch each other’s backs we do a good job of that and I think it shows.”

“I feel safe at the racetrack and I know my peers do as well. If it ain’t broke, don’t fix it. I feel like that is a good example of what we have going on. I think we are doing a good job with it.”

With so much change for the better, it’s almost forgivable to forget that there’s actual racing to discuss. The efforts to compact race weekends into single-day endeavors have eliminated concepts perhaps taken for granted, like practice and qualifying. But, in the eyes of some fans and observers, the quick transition from hauler to track has allowed teams and drivers to truly test their mettle and perhaps create a more equalized environment with everyone testing out the asphalt for the first time.

Wednesday could be a look into the future from both a social and racing standpoint. The All-Star has long been an experimental ground for NASCAR’s endeavors, and Wednesday will be no exception. Cosmetically, the competing machines will have their traditional “door” numbers aligned to the right and underglow light perhaps inspired by the early films of the Fast and the Furious franchise will paint Bristol all different colors. Speaking of the Bristol visit, a track that routinely sees post-race confrontations that violate every semblance of social distancing, this will be the first time that NASCAR holds the All-Star Race at a venue outside their Charlotte hub. Restarts will also enjoy a bit of a makeover, as the “choose cone” rule will see driver debate their position either on the leaderboard or on the asphalt.

“The choose cone kind of puts the fate in your own hands. If we can execute it well, that’s my main thing,” an excited Matt DiBenedetto said of the innovation. “I’m excited about the fact of being able to choose where you restart and maybe jump a couple of rows and if you want to go in the row that’s not preferred, but you can pick up a couple of lanes or whatever, that’s kind of cool and exciting. Hopefully, we execute it well and it goes smoothly because it would be really nice for a lot of other places.”

The Cup Series season will run through November, but with the return several other professional leagues on the horizon, the All-Star event will perhaps be the last time that NASCAR will be at the forefront of the American sports fan’s imagination. But the aura behind Wednesday is anything but that of a “last dance”. Instead, it’s a celebration, a celebration of what NASCAR was and continues to be…a circuit of close, no-holds-barred racing at one of its most volatile tracks. It can also provide a glimpse into the future and create a tremendous scale for just how far the organization has come in just a few weeks.

Such an outlook is apparent among the association’s most notable names.

“I enjoy this sport. I love this sport. I am proud of this sport and proud to be a part of this sport. It has always been fun for me over the years to sell this sport to the fans or whatever the case may be,” said Bowyer, driver of the No. 14 Stewart-Haas Racing Ford and a part-time commentator for Fox Sports. “A lot of things you are seeing right now, the All-Star race, things that we have wanted to do with our sport for a long time. (These are) opportunities that we wouldn’t have been able to take because of courage or business or a lot of reasons that we wouldn’t have been able to go to those measures that we were able to because of COVID.”

“There is no handbook that comes with (this situation). You have to create it and you have to learn from your mistakes quickly and put them to use. (We) certainly have done that with NASCAR.”