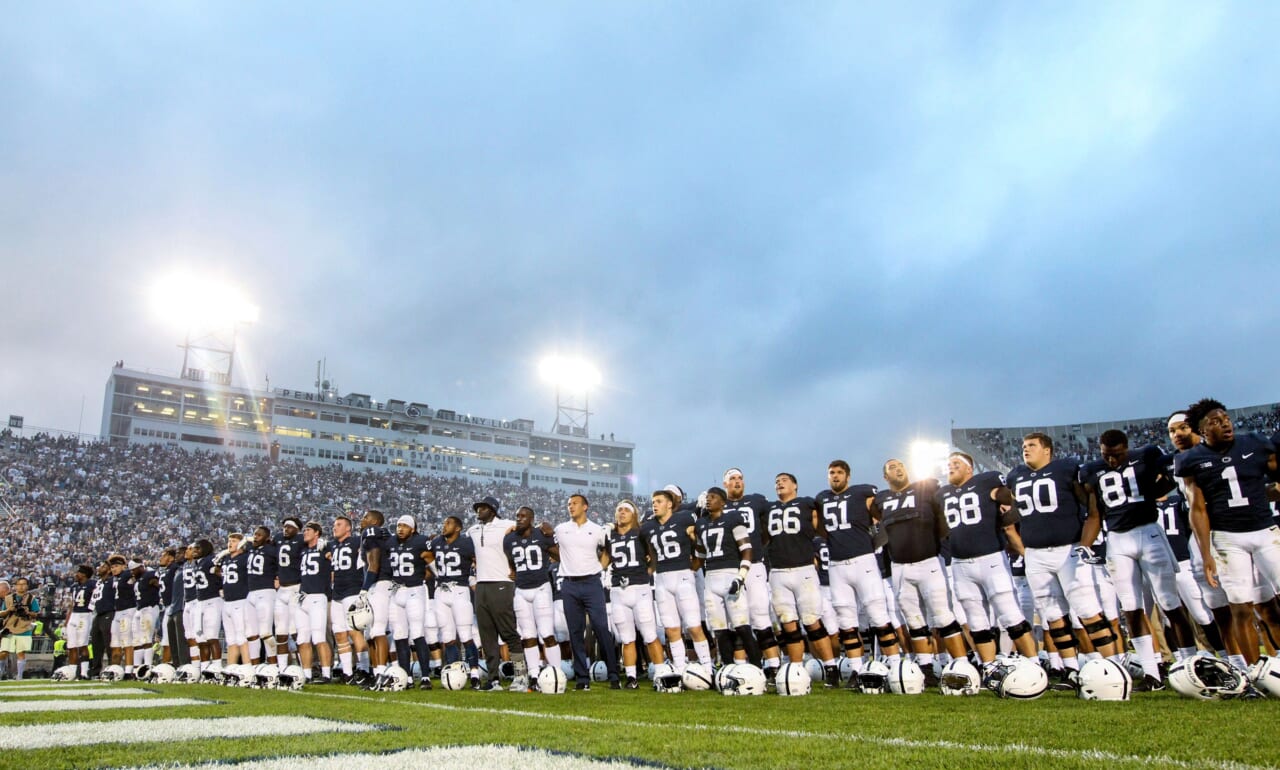 The first full weekend of college football is done, and teams from the Big Ten finally kicked off their seasons with some exciting matchups. Some of them were projected from the start to be great games. Others, like Penn State versus Appalachian State, were simply a case of an underdog turning up and not bowing down to the favorite. And then there were some games that were just strange, like the 108 point clash between Ohio State and Oregon State.

What were the biggest moments from the first Saturday?

Matt Canada starts off with a win as Maryland head coach

Maryland is not the team that most would have picked to pull off an upset. Especially not over a team that should have been at least somewhat wary, after losing to the Terrapins last year. But despite all the drama around the team’s coaching staff, and the fairly recent suspension of D.J. Durkin, the team pulled together and managed an upset win in honor of Jordan McNair.

It was a close game but it was one that Texas trailed most of the time. Maryland kept Texas from gaining the lead until the later part of the third quarter, and even then, they would take it back near the start of the fourth. Their quarterback situation was lamented going into the season, and yet Maryland starter Kasim Hill had a higher completion percentage and passer rating than Texas QB Sam Ehlinger. Additionally, Hill threw for no interceptions, while Ehlinger had two.

Despite the game being stopped for over an hour because of the weather, Maryland was able to hold the lead throughout most of the fourth quarter to secure the win. It’s a win that will greatly help the resume of Matt Canada, a figure that many have mixed opinions about after his failed stint at LSU. Now, however, he has a 1-0 record while acting as head coach.

Penn State beats Appalachian State, but not in the way they wanted

The Nittany Lions did what was expected of them and they dispatched their visiting opponents from Appalachian State, but just about nobody within the Penn State fanbase would like to repeat a performance like that anytime soon. It didn’t exactly make the team look good, after all.

Trace McSorley is one of the Heisman favorites this year, and Miles Sanders should be a good enough replacement for number two overall draft pick Trace McSorley, but none of Penn State’s stars really looked like themselves for this game and the offense was sluggish for much of it. The 45 point output doesn’t tell the actual story of the game, because Penn State only did as much as they needed and not even a tiny bit more.

They only managed ten points in the first half, after all. The third quarter went Penn State’s way, but allowing 28 points in the fourth quarter isn’t going to fly when playing against conference opposition, especially elite opponents like Michigan State and Ohio State. On the bright side, the team showed a good amount of resilience to take over during the OT period and put an end to the game.

But everyone, both fans of Penn State and fans of their rivals, know that it never should have reached that point. If the Nittany Lions want to keep their spot in the rankings, they’ll certainly have to avoid letting lower ranked opponents play up to their level as the Mountaineers did.

Penn State isn’t the only highly ranked Big Ten team to have some trouble with a nonconference opponent that everyone overlooked. Michigan State was picked by Vegas as the second most likely team to win the Big Ten East, but they had a scare at the hands of Utah State regardless.

Like Penn State, the Spartans did enough to win the game but didn’t do enough to please their fans and critics, their pass defense failing to close out Utah State and quarterback Brian Lewerke throwing an interception that would be returned for a touchdown. The running backs didn’t have the best game either, with top back L.J. Scott finishing with less than 100 yards on 23 carries.

Furthermore, the winning run didn’t come until there were about two minutes left in the game. That kind of close margin just isn’t what any top team wants out of a nonconference game like this, and you can be sure the Spartans will make some tweaks going into their next game.

Will they have a better defensive performance over an Arizona State team that put up 49 points in their season opener? That’s a question that will loom large going into their west coast road trip this Saturday. 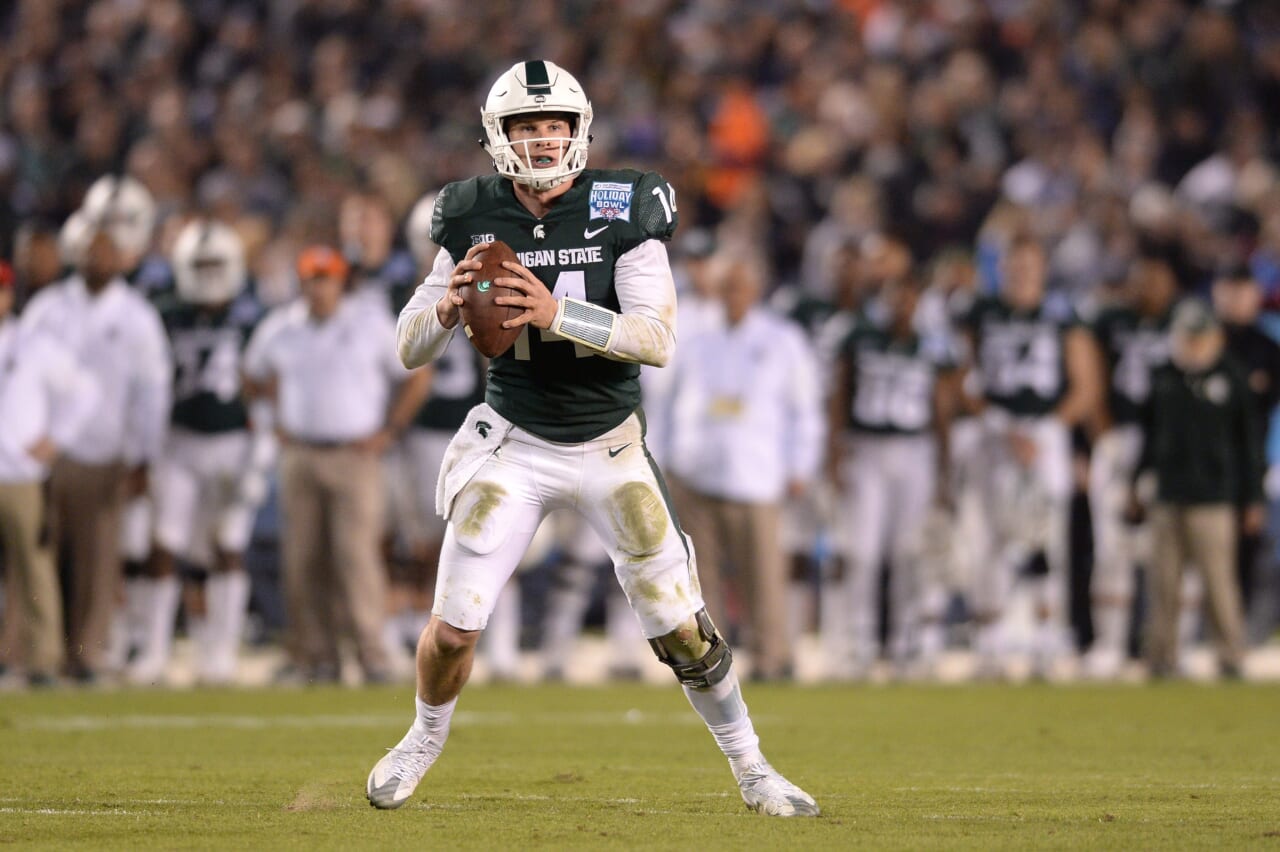 In the past articles in the Big Ten quarterbacks series, we’ve talked about the competitions between returning veterans and the new arrivals gunning to take their spots. That’s not going to be the case here. Michigan State under Mark Dantonio is perhaps known for making something out of nothing, but they won’t have to do that this year. They have one of the best quarterbacks in the country, and that’s already been proven before the start of the season.

Brian Lewerke was a 13 game starter during his sophomore year, and threw for 2,793 yards. He added 20 passing touchdowns and five rushing scores on top of that, compared to seven interceptions. Another thing that Michigan State is famous for is their running game. After all, this is the school that gave us Le’Veon Bell, only fairly recently. But Lewerke isn’t the type of quarterback that you usually see on a stereotypically run heavy team.

If the coaches need him to be, Lewerke can be an effective gunslinger. He threw 51 passes against Notre Dame and ended the game with 31 completions and two touchdowns to one interception. Against Northwestern and Penn State, he attempted 57 and 56 passes respectively.

Calling Lewerke a gunslinger just because he attempts a lot of passes would only be a surface level way of looking at it. A quarterback can rack up pass attempts and completions by throwing the ball into the flat over and over, or picking up short gains from slant routes early and often. Lewerke isn’t doing that.

Against Northwestern, he was willing to rifle the ball into coverage, even doing so a bit too much and nearly turning it over more times than his four touchdowns and one interception stat line would indicate. His deep accuracy also needed work in that game, and he missed several open receivers downfield after the receivers had beaten their defenders. Still, more times than not, Lewerke’s gunslinging play style worked out for the better.

In a tough division that’s part of a tough conference, dodging the pass rush is also a good skill for a quarterback to learn. While Lewerke is a pocket passer, he’s able to move around and prolong the pass rush while still finding targets down the field. You could make a strong case that his vision is his best trait, as this vision is just as good even when Lewerke is on the move.

A rough NFL comparison in terms of play style might be Russell Wilson, although at 6’3″ and 212 pounds, Lewerke is the QB with the larger frame. He’s also a bit more willing to use his legs as a regular part of his game plan, even if he’s not crossing the line of scrimmage with a scramble.

When his judgement improves in his junior year, Lewerke should have a better idea of when to gun the ball towards a covered area and when to hold onto it. That decision-making was dodgy at times this year, but it’s expected for a player in his first full season as the starter.

This year, though? MSU is out to capitalize on the off the field chaos happening in Columbus, and make it back to the conference title game. If they complete that feat, you can already be sure of which player will be at the forefront of the offense. 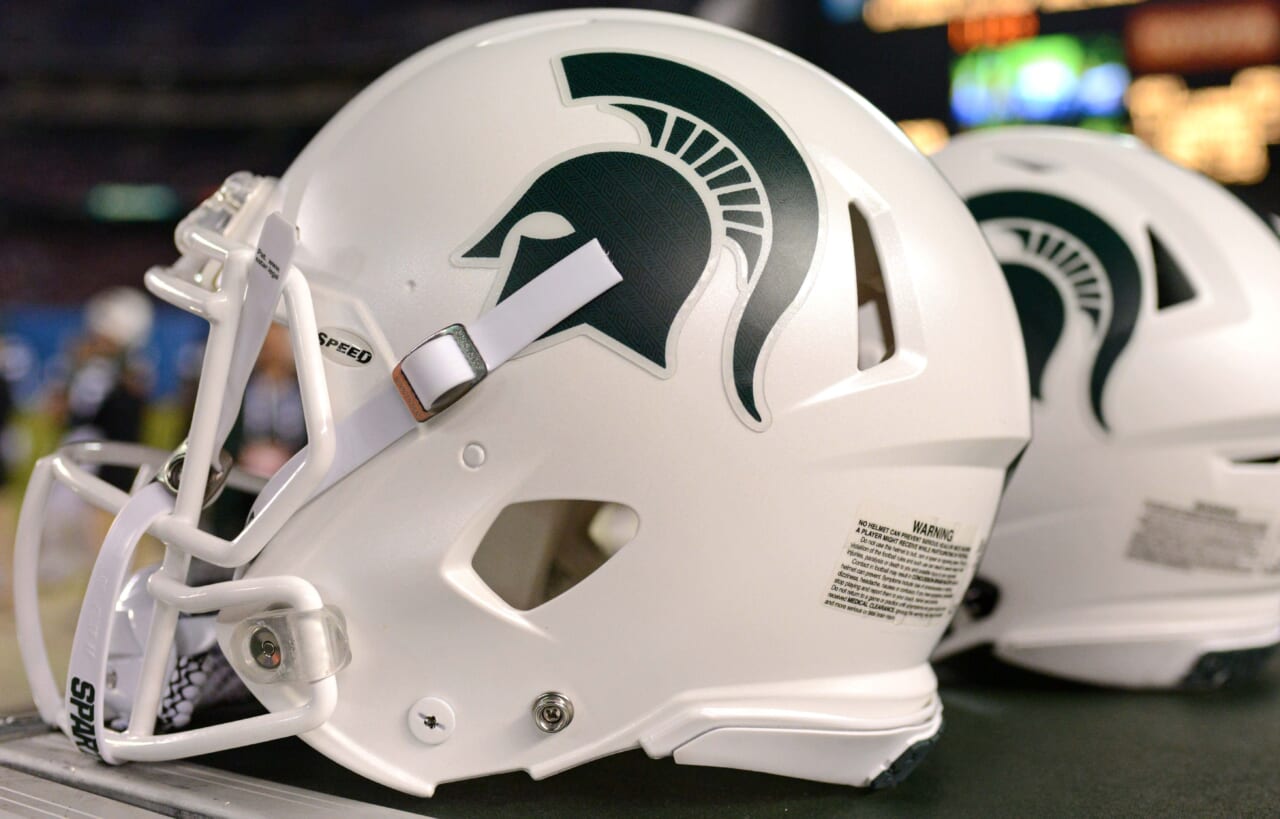 The Michigan State Spartans are known for getting the best out of unheralded players, and that trend might continue if they land three star 2019 quarterback Sam Saxton. MSU is by far the best team that’s recruiting him at the moment, with the main competition being Ivy League schools and lower ranked FBS schools such as Rutgers, Memphis, New Mexico, and Southern Miss.

What do the Spartans see in Saxton, then? Despite the lack of interest from other major FBS schools, Saxton is ranked as the 20th best pro style quarterback for the 2019 class, according to 247Sports. He fits the mold of one, too. His 6’5 frame is something that pro style college teams and, at the next level, NFL teams love.

“I think they’re very interested in me,” is what Saxton had to say about Michigan State. “They think I have all the ability and components that can make a great Michigan State quarterback.”

The team still hasn’t given him an offer, but they have kept up the interest that Saxton mentioned. He’ll visit MSU on July 31st, and 247Sports gives him a 100% chance of joining the Spartans. It’s not surprising, given the gap in quality between the Spartans and most of the other schools that have shown interest in Saxton so far.

But what has he actually done on the field? Well, he threw for a little over 2,000 yards and finished with 30 touchdowns last season, compared to only three interceptions. His numbers aren’t too far off from some of the better quarterbacks in his class, despite his lower ranking compared to them. Additionally, Saxton comes from a football family, with his grandfather and father playing for the University of Texas.

Texas, however, isn’t recruiting him and Michigan State may end up being the next best thing for Saxton. An interesting tidbit is that Saxton started his career at Westlake before transferring. Westlake is, notably, the high school team of former Spartans quarterback Nick Foles.

Will Saxton’s career turn out the same, if he joins MSU? There’s no guarantee. But if things do work out between Michigan State and Saxton, it wouldn’t be the first time a quarterback from his former school has found success with the green and white.