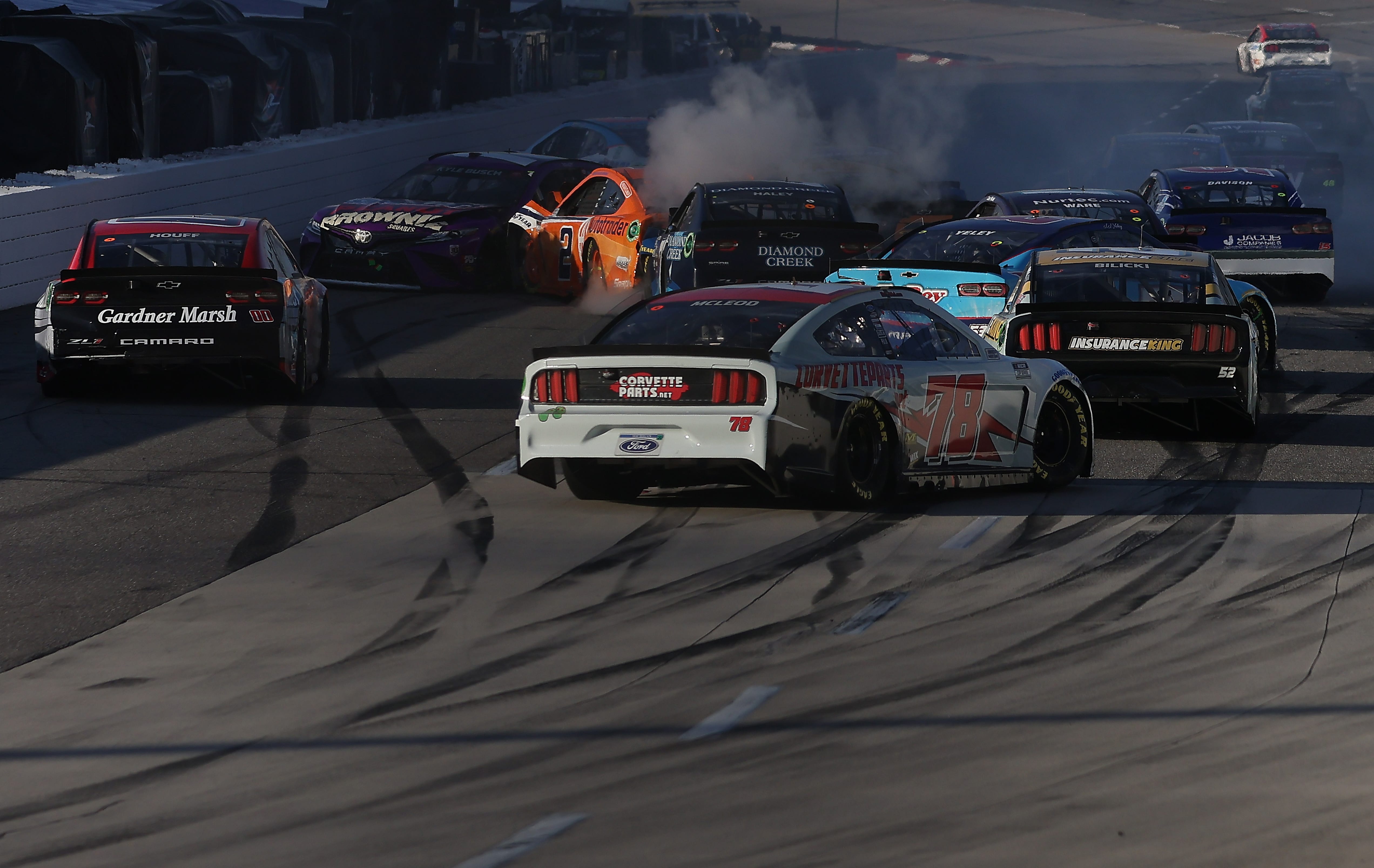 Truex survived several caution flags and a battle with a teammate to become the NASCAR Cup Series’ first two-time winner in 2021.

New Jersey native Martin Truex Jr. became the first two-time winner on the 2021 NASCAR Cup Series circuit on Sunday, taking home the Blue Emu Maximum Pain Relief 500 at Martinsville Speedway. The race began on Saturday night, but all but 43 laps were pushed to Sunday due to inclement weather.

Truex survived a seemingly endless barrage of caution flags to earn the victory, which featured a final pass of Joe Gibbs Racing teammate Denny Hamlin with 15 laps to go to secure the win. The No. 19 Toyota previously won at Phoenix and has earned a win at Martinsville in each of the past three seasons.

Truex’s No. 19 was a rare clean vehicle in a race that featured 15 caution flags, all but five coming after the midway mark at lap 250. The most carnage occurred on lap 387 when a get-together between Kyle Busch and Chris Buescher blocked the entry into turn two caused major damage and ended the days of Alex Bowman, Daniel Suarez, Brad Keselowski, and Michael McDowell. An ensuing red flag paused the race for just over 20 minutes.

The constant restarts allowed Hamlin’s No. 11 Toyota, a strong short-run vehicle, to jump out to the lead on restarts, a gambit that allowed him to lead a race-best 276 laps. Truex gained the lead after the final caution of the day (Chase Briscoe’s spin in turn three) led to pit stops, but Hamlin quickly assumed it back.

But as the final 42 laps went green, Truex eventually realized that his car would be able to outperform the tightening No. 11. He eventually made the victorious pass with 16 laps to go and earned the win by a 1.9-second margin.

It was part of a strong day for Joe Gibbs Racing, which placed all four of its Cup vehicles in the top ten. Christopher Bell, another 2020 winner at the Daytona road course, finished seventh and led nine laps while Busch recovered to place tenth. In the Xfinity Series conclusion that ran before the Cup event, Gibbs had four cars in the top seven.

Truex’s victory continues a dominant stretch on short tracks. He has now won five of the last eleven events at short tracks (less than a mile long) and is one of two active drivers with at least three wins at Martinsville (the other being his teammate Hamlin with five). The win was also the 29th of Truex’s Cup Series career, breaking a tie with Carl Edwards and Hall of Famer Rex White.

NASCAR will return to Martinsville in October, as its fall event will serve as the penultimate race of the season.

A prime opportunity awaits for Truex to continue his short-track dominance. The series descends upon Richmond Raceway next Sunday for the Toyota Owners 400 (3 p.m. ET, Fox). Truex’s No. 19 team swept the pair of Richmond events during the 2019 season. 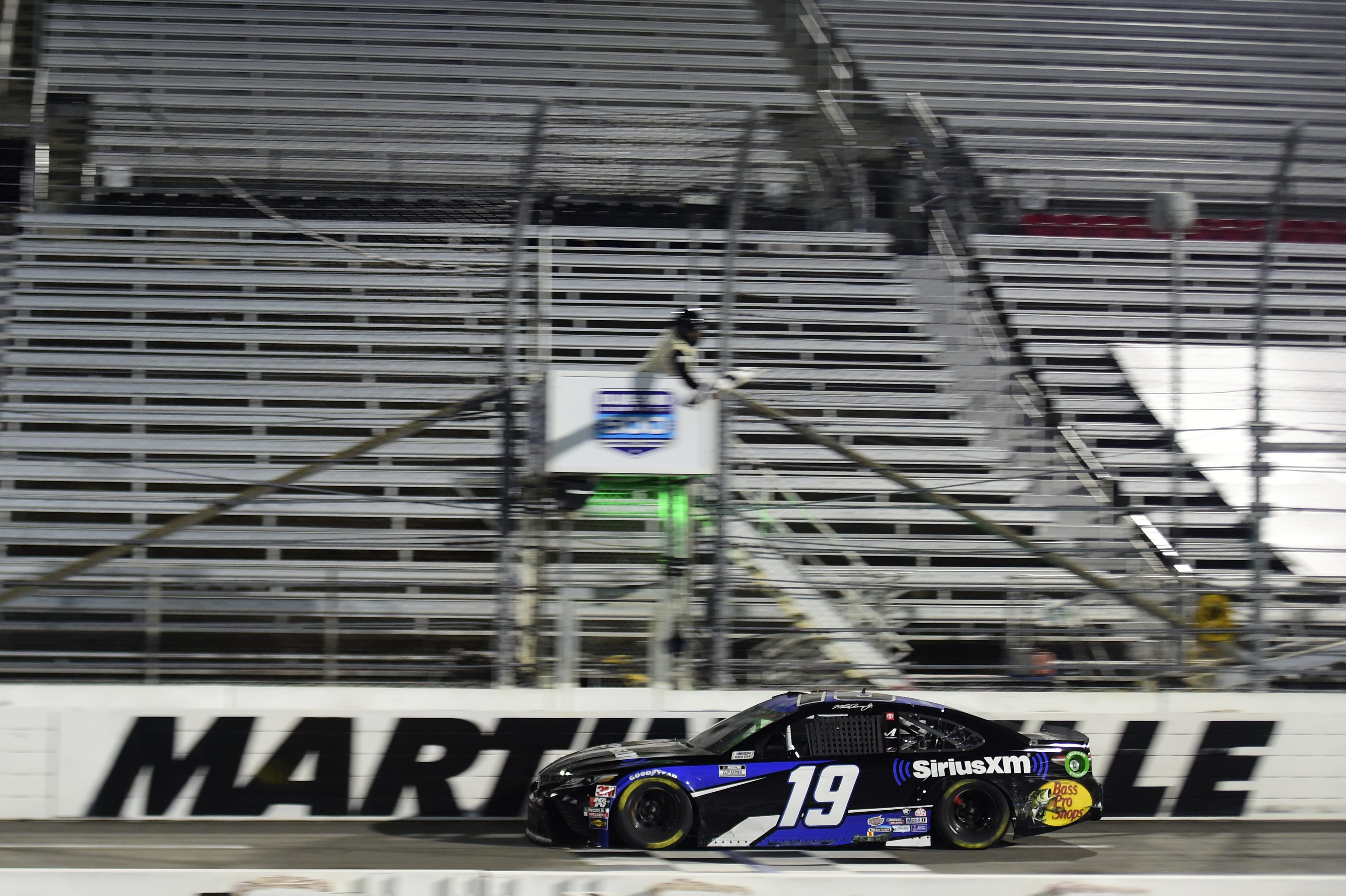 Martin Truex Jr. was literally lights out on his way to victory on Wednesday night at Martinsville Speedway.

The driver of the No. 19 Joe Gibbs Racing Toyota and Mayetta, NJ native led the final 130 laps of Wednesday night’s Blue-Emu Maximum Pain Relief 500, earning his first victory of the 2020 season at the first NASCAR Cup Series night race in Martinsville history. It’s also the first win Truex has earned under the guidance of first-year crew chief James Small.

Truex posted a fourth-place finish after the first of two 130-lap stages, but was forced to start part two toward the back of the field after failing to adhere to the pit road commitment line. While he made his way back to the front, Joey Logano took home victory in the first stage en route to leading a race-high 234 circuits. Truex made it back to 15th by the end of the second stage while Jimmie Johnson ended Logano’s near-monopoly with a pass on lap 202. Johnson would go on to earn his first stage win since last season’s July Pocono event.

As the third stage commenced, Johnson failed to break up a Team Penske party at the front, as Logano battled his fellow Fords Ryan Blaney and Brad Keselowski for the lead. Truex was able to get back up to the front by the time the caution flag came out at lap 327 of 500 for an incident involving Erik Jones and David Starr. He eventually passed Keselowski for the lead with 130 circuits remaining and preserved it during pit stops under caution when Quin Houff spun shortly before the 400th go-around. After retaining the lead once more after a furious restart, Truex was able to coast to victory, taking home his second consecutive victory at the short track by a 4.7-second margin.

Ryan Blaney finished in the runner-up spot after an eventful evening of his own. The driver of the No. 12 Team Penske Ford started on the pole via draw but found himself a lap down before the end of the first stage. He eventually was able to work his way back to the lead, winning the race off pit road at the end of stage two, but a disastrous pit stop (that included a penalty for having men over the wall too early) pushed him to the rear of the field. He recovered well enough to chase down everyone but Truex, the 2017 Cup Series champion.

Logano and Keselowski finished third and fourth, while Chase Elliott rounded out the top five.

The NASCAR Cup Series returns to action on Sunday afternoon at Homestead-Miami Speedway for the Dixie Vodka 400 (3:30 p.m. ET, Fox).

Scary scene here as Austin Dillon has to be helped out of his car for extreme heat conditions caused by a crush panel getting knocked out early in the race. All of this while his wife is due to give birth. Hope he's OK. pic.twitter.com/OZEyvrNRcN