Defenders reign supreme, but a strong offseason wasn’t enough for the New York Jets to impress the powers that be at EA Sports.

Put EA Sports on the list of so-called experts the New York Jets will be looking to prove wrong in 2021.

The unveiling of player ratings for EA’s upcoming pro football simulator Madden NFL 22Â (the 35th edition of the long-running video game franchise) is complete after Saturday, released in conjunction with ESPN programs. In terms of overall team ratings, the Jets round out the list of 32 teams, coming in last with a mark of 72.

The effects of last year’s two-win endeavor apparently still weigh heavily on the Jets, whose strong offseason failed to impress EA’s talent evaluators. Their plunge becomes particularly visible when it comes to the offense, as they’re the only unit ranked below 70 with a 69 (right behind 31st-ranked and fellow AFC East competitor Miami). They fare slightly better on defense, as their label of 74 is tied for third-worst on the list with Cincinnati and Detroit. Only Atlanta (73) and Houston (72) trail.

In individual cases, Quinnen Williams tops the Jets’ personal rankings with an 86 rating. It’s an eight-point improvement from the opening rankings ofÂ Madden NFL 21, which perfectly showcase the transformation the Jets have gone through over the past year. Of the top 15 names in the Jets’ ratings from last season, only four (Williams, C.J. Mosley, Marcus Maye, and Jamison Crowder) remain.

Defenders take the first four spots of Jets’ ratings and seven of the first ten. Williams is followed by Maye (85), Mosley (84), and Carl Lawson (83). The offensive group is paced by receiver Corey Davis, who’s tied with his fellow New York newcomer Lawson (83).

As previously reported, Zach Wilson earned a 75 overall rating, second amongst rookie passers behind Trevor Lawrence. Wilson is tied for the fourth-best rating amongst rookies overall, tied with receivers JaMarr Chase and DeVonta Smith. Though he was upset with his respectable change of direction rate of 93, rookie catcher Elijah Moore nonetheless tied for the team lead in the subsection with Crowder.

The Jets’ full team rankings can be found here.

Madden NFL 22Â will be released on August 20. The game can be pre-ordered on several platforms on its official site. 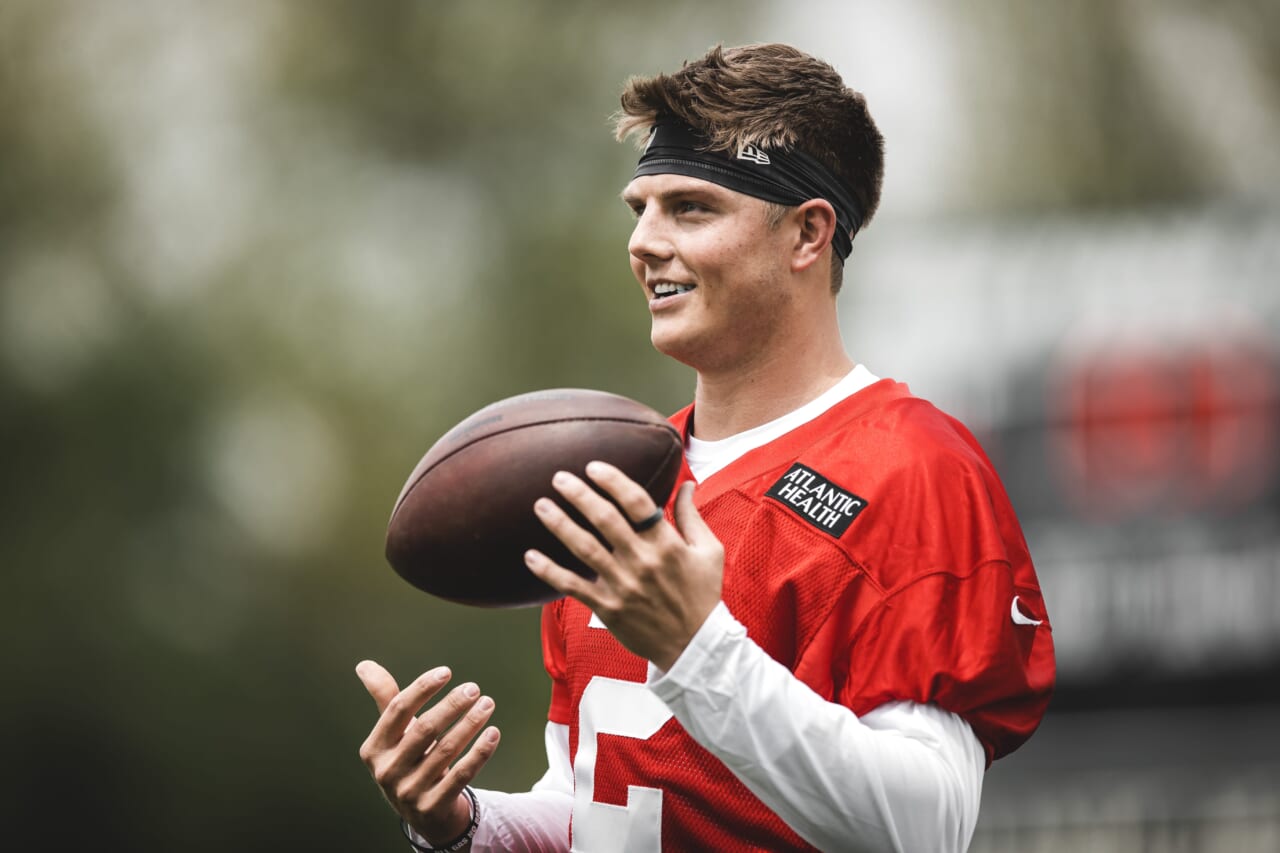 If EA Sports’ virtual affairs are anything to go by, the New York Jets are getting an upgrade at quarterback.

Zach Wilson was one of the big winners of the Madden NFL 22‘s original rating reveals, as his debut rating of 75 ranks second amongst incoming professional quarterbacks.

The second overall pick of the 2021 draft sits only behind top choice Trevor Lawrence of the Jacksonville Jaguars and is tied for the fourth-highest rookie overall with receivers Ja’Marr Chase and DeVonta Smith. Atlanta Falcons tight end Kyle Pitts tops the list at 81.

Initial player ratings for the 35th edition of EA Sports’ long-running football simulator named after Hall of Fame head coach/commentator John Madden are slowly trickling in as NFL teams open their training camps. The reveals are coming through ESPN programming such asÂ SportsCenter,Â Get Up!, First Take, and NFL Live, as well as EA’s official accounts. ESPN has dubbed the event Madden Ratings Week and a full schedule of unveilings can be found here.

Members of the “99 Club”, those who attain the highest possible rating in a MaddenÂ game, will also be unveiled throughout the week. Green Bay Packers receiver Davante Adams is the first such honoree.

Wilson’s reveal came on Sunday during the Kickoff Special hosted by Laura Rutledge and Mina Kimes on Sunday afternoon, which unveiled the rankings for top rookies, as well as veterans in transition. In addition to his overall number of 75, Wilson gains ratings of 94 in throw power (nine points ahead of his New England counterpart Mac Jones), 83 in speed, 79 in passing under pressure, and 70 in awareness.

Your first look at Rookie Ratings in #Madden22

Elijah Moore’s partial reaction to his originalÂ MaddenÂ rating was shared on the franchise’s official Twitter account. Though Moore’s overall rating of 73 was not revealed in the video, in which he co-stars with several of his fellow freshmen, it did catch his reaction to the change of direction subsection. Moore gets a little ahead of himself…he believes he should he receive a 100…but he still earns a respectable 93. Moore, however, isn’t pleased with his grade.

Madden NFL 22Â will feature two athletes on its cover (Tom Brady and Patrick Mahomes) for the first time since the edition that was released for the 2009-10 season (Larry Fitzgerald and Troy Polamalu). It will be released on August 20 and is available for pre-order on EA’s official site.

Will you be leading Wilson and the Jets to Super Bowl glory in Madden NFL 22’s franchise mode? Follow @GeoffJMags and continue the conversation.Â

Gamers in green got a bit of a treat this week, as the New York Jets’ ten best players in Madden NFL 21 were revealed.

The status of the 2020 NFL season may be in question, but pixelated gridiron endeavors are perhaps more ensured than ever.

As the arrival of Madden NFL 21 looms next month, player ratings from the game have begun to trickle out through either leaks or official releases from developer Electronic Arts. Popular Madden strategy and fan site Madden School (which is not affiliated with EA) has obtained the top ten highest-rated players from each of the league’s 32 teams. The top portion of the Jets’ list is dominated by defense, with six defenders leading the rankings. Safety Jamal Adams headlines the proceedings with a mark of 92, up two points from last season.

The full top ten is below…

Additionally, EA officially released the top ten players in each skill position, as well as the ratings for rookies in those spots…

Notably absent among the top ten is quarterback Sam Darnold, who had a 74 labeling in last year’s original postings. Madden rankings can fluctuate and update throughout the season, so these rankings are subject to change.

Baltimore Ravens quarterback Lamar Jackson is set to grace the cover of Madden NFL 21, which will be the 34th edition of the iconic franchise. Super Bowl MVP Patrick Mahomes of the Kansas City Chiefs and Carolina Panthers running back Christian McCaffrey are the latest members of the “99 Club”, earning the highest rating a player can achieve in the game, which is named after renowned football coach and commentator John Madden. Brett Favre is the only Jets player to grace the cover of Madden. He originally appeared in a Green Bay Packers uniform for Madden NFL 09 (released in August 2008), but an alternate cover was made available after he was traded to New York shortly before the start of the season.

Madden NFL 21 well be released on August 28 on the PlayStation 4 and Xbox One consoles.

RADIO.COM hosted a virtual showdown between New York Giants and Dallas Cowboys legends at a pixelated version of MetLife Stadium.

The ongoing pandemic has eliminated a lot of the norms of daily life that we take for granted. Close games between the New York Giants and Dallas Cowboys have apparently managed to become an exception.Â RADIO.COM hosted a virtual showdown between legends of the Giants and Cowboys in a simulation presented on EA Sports’Â Madden NFL 20 video game. The internet radio platform and music recommender is a property of Entercom, which owns both WFAN and 105.3 The Fan (KRLD-FM), the respective flagship radio stations of New York and Dallas respectively.

Replicas of players from each of the respective teams’ history, spanning over 150 combined seasons of football, partook in the simulation, which Dallas won by a 23-20 final thanks to a Dan Bailey field goal with 18 seconds to go.

The Giants, dressed in their home unforms worn from 1976 through 1998, jumped out to an early lead that they held for a majority of the first half. Emlen Tunnell intercepted a Roger Staubach pass on Dallas’ first play from scrimmage. Eli Manning needed only three plays to capitalize, finding Odell Beckham Jr. for an eight-yard score. Between Bailey field goals, Manning threw his second touchdown pass on the end of an 11-play, 75-yard drive, this one going to Jeremy Shockey from seven yards out. Manning was bought some time in the pocket by an offensive that consisted of Rosey Brown, Shaun O’Hara, Mel Hein, Chris Snee, and David Diehl before finding Shockey for a score that brought digital MetLife Stadium to its feet.

Dallas ventured into the Giants’ red zone, but Corey Webster’s interception took a touchdown reception from Michael Irvin. However, the expected momentum solidification never came. Manning found Beckham on the Giants’ next offensive play, but a fumble forced by DeMarcus Ware was picked up by fellow linebacker Sean Lee for a touchdown. Lawrence Tynes booted a 47-yard field goal to slightly inflate the Giants’ lead, but Emmitt Smith gave the Cowboys their first lead on a 75-yard scoring rush just as the two-minute warning commenced.

The Giants got back to the Dallas red zone with no timeouts, but Shockey’s attempt to score a last-second touchdown after breaking several tackles was thwarted by Byron Jones, who stopped the tight end just short of the goal line as time expired.

Both team’s defensive stars rose to the occasion in the second half. Tunnell, Mark Collins (who was wearing No. 24 in contrast to his traditional No. 25) and Michael Strahan were among those with sacks for the Giants, but they only mustered another Tynes field goal on offense. After Bailey’s fateful boot, the Giants’ brief counter got to Dallas’ 40 after Manning found Amani Toomer for a big gain. However, the virtual New York brain trust opted for a win rather than a deep Tynes attempt, and Manning’s prayer with Shockey in the vicinity fell incomplete to end the game.

Dan Bailey 39-Yard FG is GOOD! Giants are going to need to throw up a prayer. @DallasCowboys 23@Giants 20 pic.twitter.com/yj0grTvqdT

The modern-day, human incarnations of the Giants and Cowboys are currently set to face off on October 11 and January 3.