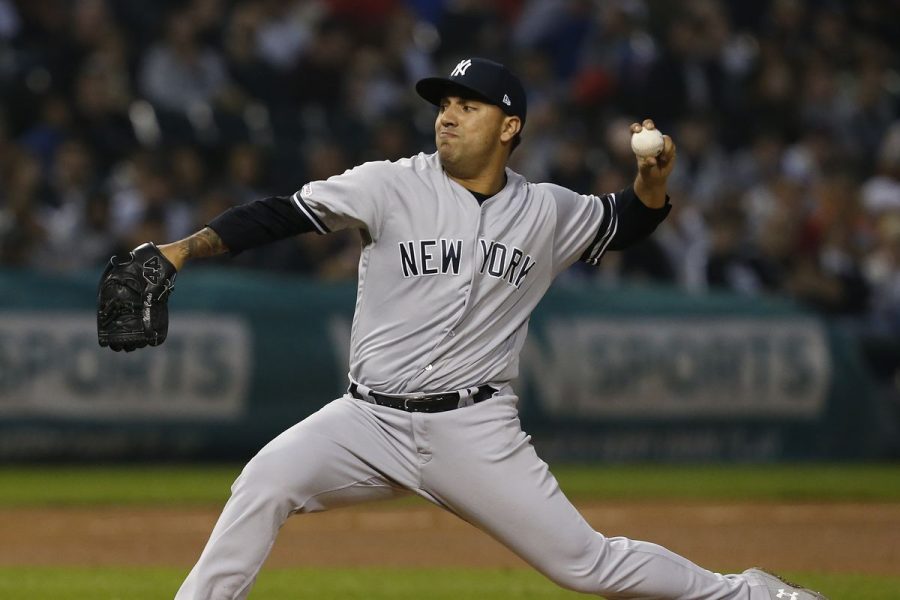 This afternoon was the rubber game with the New York Yankees playing game three against the Chicago White Sox. The Sox won the Field of Dreams game on Thursday night, and the Yankees won last night’s game in the tenth inning. Today, Nestor Cortes Jr. faced the Sox ace Lucas Giolito. The Yankees won the game 5-3 and the series for their 10th in 11 tries.

The top of the first inning saw DJ LeMahieu face Giolito; he flew out to center. Brett Gardner walked on the 13th pitch of the at-bat. Aaron Judge also walked. Joey Gallo went down looking. Giancarlo Stanton struck out swinging on a ball well out of the zone, leaving two on base. At the bottom, Tim Anderson had a comebacker right back to Cortes. Hernandez ground out to Odor, who made a spectacular throw to first. Jose Abreu blooped to center of a single. Eloy Jimenez singled with Abreu going to third, and with the throw going to third, Jimenez took second. Andrew Vaughn hit back to Cortes with the Sox, also leaving two on base. No score.

The top of the second was led off by Luke Voit, who singled to left. Rougie Odor hit a two-run homer to right-center. Kyle Higashioka went down on strikes. Tyler Wade struck out swinging. LeMahieu singled to left. Gardner doubled with LeMahieu going to third. LeMahieu made it home on an errant throw to second. Judge popped out to second. At the bottom, Yoan Moncada tipped back into the glove of Higgy. Luis Robert flew out to Gardner in center. Danny Mendick singled up the middle. Seby Zavala struck out swinging. New York Yankees 3 White Sox 0.

Joey Gallo led off by hitting a push bunt on the first pitch he saw in the third inning. Stanton flew out to the warning track in center. Voit singled to left with Gallo going to second. Odor struck out swinging. Higashioka went down looking. Anderson led off the bottom by grounding out to Wade at short. Hernandez hit a comebacker to Cortes. Abreu walked. Jimenez singled down the right-field line with Abreu going to third, but Vaughn ground out to end the inning. New York Yankees  3 White Sox 0.

Tyler Wade led off the fourth by going down on strikes. LeMahieu flew out at the left-field wall. Gardner walked. Judge reached on an E4. Gallo struck out swinging with a chance to blow the game wide open, leaving Gardner and Judge on base. At the bottom, Moncada singled to Wade on a ball he couldn’t handle. Robert went down looking. Mendick struck out to end the inning. Yankees 3 Sox 0.

Giancarlo Stanton led off the fifth inning by walking against new Sox pitcher Ryan Tepera. Voit flew out to center. Stanton advanced on a passed ball. Odor went down swinging on the 10th pitch. Higashioka struck out but reached on a wild pitch, with Stanton going to third. Wade flew out to the left to end the half. At the bottom, Anderson singled past Odor at third. Hernandez hit into a 5-4-3 double play. Abreu went down, looking to end the inning. Yankees 3 Sox 0.

It was the top of the lineup for the Yankees in the sixth inning. LeMahieu tapped out to third. Gardner flew out to the left-center. Judge walked. Judge stole second. Gallo struck out to end the half.  Jimenez leading off the bottom, struck out. Vaughn homered into the left-field stands to get the Sox on the board. Moncada ground out. Robert went down, looking to end the inning, but the Sox got on the board. New York Yankees 3 White Sox 1. Nestor Cortes Jr. pitched a season-high 98 pitches.

Stanton started the seventh inning with his second walk of the game. Voit went down on strikes. Rougie Odor faced new pitcher Aaron Bummer and went down looking on an awful call. Stanton advanced to third on a wild pitch. Higashioka went down looking stranding Stanton. At the bottom, Jake Lamb pitch hitting for Mendick against Stephen Ridings, walked on four pitches. Collins pinch-hitting for Zavala struck out. Anderson hit into a double play to end the inning.  Yankees 3 Sox 1.

The eight-inning was led off by Wade, who ground out. LeMahieu walked. Gardner ground out. Judge was intentionally walked. Gallo went down on strikes stranding two. At the bottom, Hernandez walked. Abreu faced new pitcher Jonathan Loaisiga and hit into fielder’s choice. Jimenez stuck out. Vaughn popped out to get Loaisiga out of a jam. Yankees 3 White Sox 1.

The ninth inning was led off by Giancarlo Stanton who got a double to right. Jonathan Davis was sent in as a pinch-runner. Voit hit a two-run homer into the left-field stands. Odor singled to right. Higashioka hit into what should be a double play but reached second on an errant throw that Higgy knocked out of Abreu’s glove. Wade struck out, and Lemahieu flew out to end the half.

At the bottom of the ninth, with the last licks on the line for the White Sox Moncada against Lucas Luetge, he walked. Robert singled to left. Lamb popped out at second. Collins doubled to the right-field wall just out of the reach of Aaron Judge as Moncada scored. With Anderson coming up, the Yankees turned to Wandy Peralta to close it out for the Yankees. Anderson singled driving in Collins. Hernandez hit into a double play to end the game.

The final score was the New York Yankees 5 and the Chicago White Sox 3. The winning pitcher was Nestor Cortes Jr., and the loser was Lucas Giolito. The save went to Wandy Peralta.