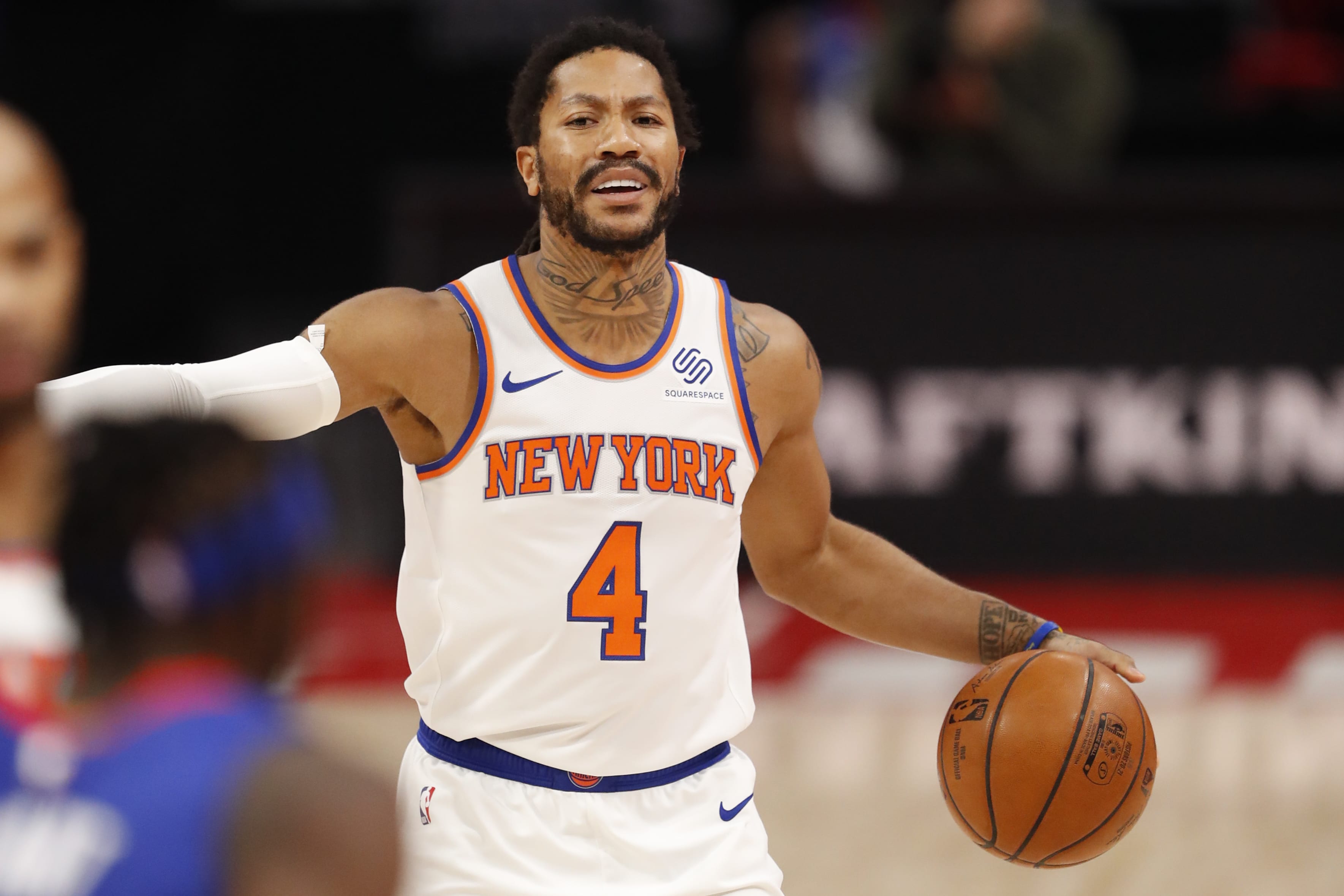 When Derrick Rose sought Detroit Pistons coach Dwane Casey’s blessing to reunite with Tom Thibodeau in New York, he thought of playing in the playoffs.

That mindset hasn’t changed despite Rose missing an extended period of time due to COVID-19 and the New York Knicks (25-26) falling outside the top six in the East.

The Knicks have lost eight of their 14 games since the All-Star break entering Wednesday’s important matchup against their Atlantic Division rival Boston Celtics, who have an identical 25-26 record.

Rose admitted he is still working on his conditioning despite coming off with a 16-point performance in the tough two-point loss to the Brooklyn Nets last Monday.

Rose isn’t thinking of a play-in scenario. He was honest that he’s not fully aware of the new format the NBA introduced in the Orlando Bubble last season to spice things up heading into the playoffs.

“I really don’t know the rules of it,” Rose said. “What is it? How many games do you have to play?”

Rose doesn’t want anything to do with that and wants to go straight to the playoffs.

“I heard about it last year but didn’t pay too much attention to it. We weren’t in the playoffs and I don’t watch basketball like that. If we’re there, we have to play those games,” said Rose who missed the Orlando Bubble with the Pistons last season. “But we want to avoid that and just try to win as many games as possible. So we don’t have to worry about that. That’s our ideal choice if we can pick it.”

The Knicks are 2-3 since Rose returned from his COVID-19 battle. He had a solid first half against Kyrie Irving and the Nets with 15 points. But Rose only scored on one free throw in the second half. Clearly, he’s not yet where he wants to be conditioning-wise.

It’s going to take some time but it’s going day by day, practice by practice, and in the game, quarter by quarter. I had a pretty good half last game and now the goal is to have two legit halves and just play as hard as I can so I can build up my wind,” Rose said.

The Knicks were careless and have blown double-digit leads in their last three losses. Their only win against a team above .500 since January came at the expense of a Milwaukee Bucks team who were missing seven players, including four of their starters led by back-to-back MVP Giannis Antetokounmpo.

The Knicks failed to capitalize on some winnable games. They’ve lost to the league’s worst Minnesota Timberwolves. They couldn’t stop Luka Doncic and Irving.

The Nets game could have been theirs after James Harden’s hamstring injury acted up four minutes into the game. For a while, they appeared to have seized the opportunity, building a 14-point lead only to squander it easily— an alarming trend in the Knicks losses.

With only Irving left from the Nets’ Big 3, the Knicks blew their chance of beating their rivals across the river. Instead of stepping up, they shrunk in the big moments.

Instead of taking care of the little things, they overlooked them.

Julius Randle, who misfired on a potential game-tying jumper at the end, somehow lost his focus down the stretch after his scuffle with Timothe Luwawu-Cabarrot midway in the fourth quarter.

The Knicks All-Star forward turned the ball over in the next play after he and Luwawu-Cabarrot earned double technical fouls. And Randle only scored on a pair of free throws the rest of the way.

“I’m not sure what his problem was,” Randle said afterward. “Like I said, he’s not a guy I’m worried about when I’m playing.”

The player who was the least of his worries killed them in the end as Luwawu-Cabarrot came back to haunt him and the Knicks.

Luwawu-Cabarrot, who finished with nine points, three assists, and three rebounds, made the most important play of the game. He tipped in a Joe Harris’ miss to Jeff Green, who sank the game-winning free throws.

The Knicks forgot to box him out. And they paid dearly for it.

In three (Miami, Minnesota, and Brooklyn) of their last four losses, the Knicks got beaten in the offensive glass.

Had the Knicks been careful, they could have maintained their top-four standing in the East. But that’s water under the bridge now.

Tonight, they have been afforded another golden opportunity as the Celtics will be without Kemba Walker (load management) and trade deadline acquisition Evan Fournier (health and safety protocols).

The Knicks could learn from Joe “Deke” Deacon (Denzel Washington) in the 2021 movie “Little Things.”