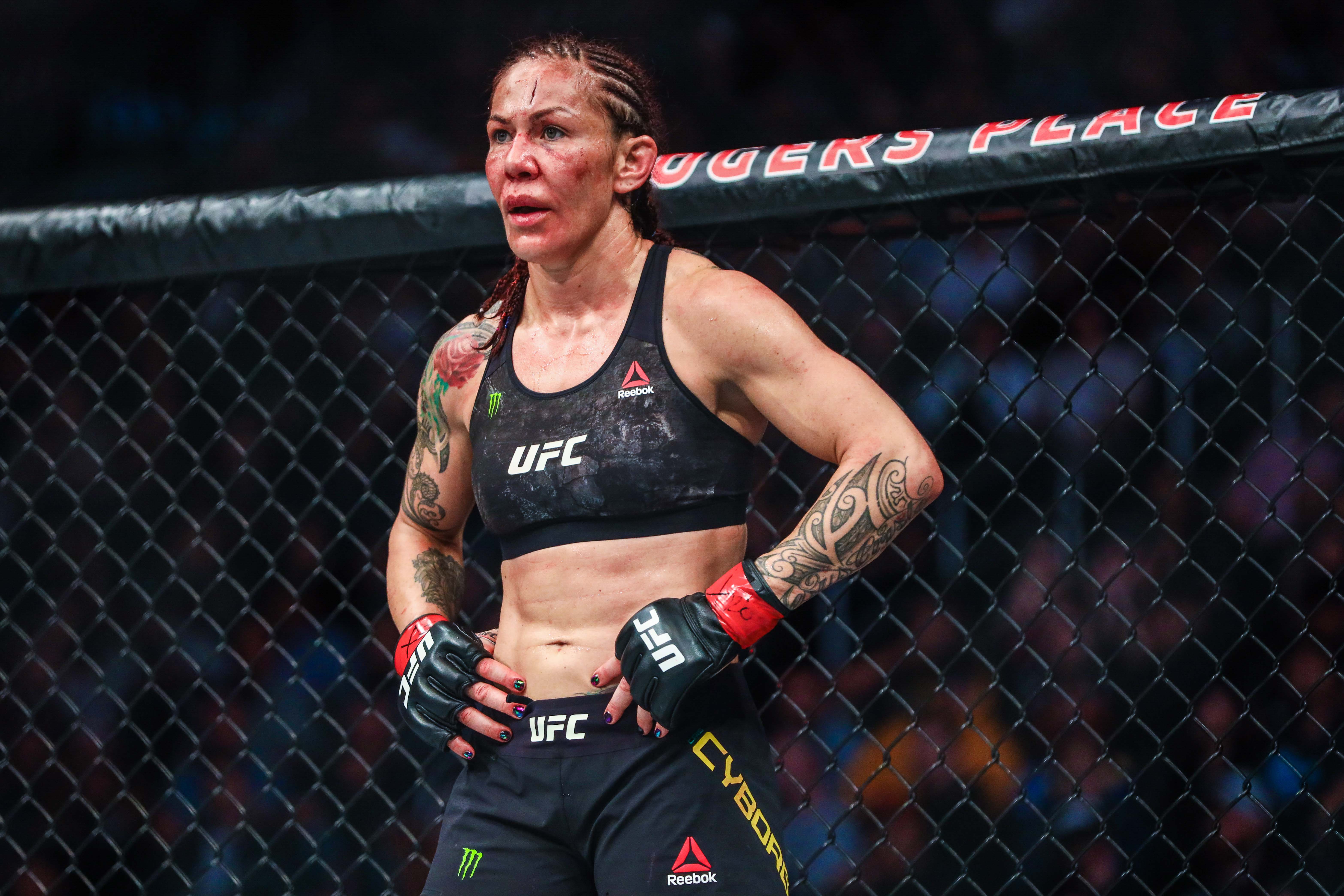 Tomorrow night in the main event of Bellator 259, the women’s featherweight title is up for grabs. The reigning champion and all time great Cris Cyborg (23-2, 1 NC) is back to defend her crown against Leslie Smith (12-8-1).

This Bellator title fight is actually a rematch from 2016. Leslie Smith was the first woman to welcome Cris Cyborg to the UFC. That night, Cyborg was able to stop Smith in just 81 seconds.

Cyborg went on to capture the UFC featherweight title and now she’s the Bellator featherweight champion. Cris Cyborg lost her professional MMA debut and since then, she’s been almost perfect.

In fact, most of the time, the Bellator champion has looked indestructible. The only woman to defeat Cyborg is Amanda Nunes who did it in devastating fashion. Nunes is widely considered to be the greatest of all time so there’s no shame in Cyborg losing that one.

Since making the move to Bellator, Cyborg has gone 2-0 with two stoppage victories. Her last win against Arlene Blencowe was her first career submission victory to go along with her 18 career knockouts.

Leslie Smith is going to look to pull off the massive upset at Bellator 259. Since joining the promotion in 2019, Smith has gone 2-1 with a loss to Blencowe. Overall, Smith is 4-1 in her last five fights leading up to tomorrow night.

Cyborg will walk into Bellator 259 as a staggering -1200 favorite and she should be. Again, the only woman to defeat her was the greatest of all time. Cyborg is considered by many to be the second greatest female fighter of all time.

She’s captured titles in Strikeforce, Invicta, the UFC, and Bellator. If I’m being completely transparent, I just don’t see how Leslie Smith can win tomorrow night. Of course, it’s a fight and technically anything can happen.

However, we’ve seen this fight before and I don’t think the rematch goes any different. Smith would have to either catch Cyborg with a perfect punch or survive and outwork the champion over five rounds. Unfortunately for Leslie Smith, I don’t see this fight making it past the first round.

Prediction: Cris Cyborg by TKO – Round 1

In cased you missed the Bellator 255 broadcast last Friday, we learned that the promotion has finalized a big time women’s matchup. The matchup will headline Bellator 259 on May 21st.

That matchup features the Bellator featherweight champion Cris Cyborg (23-2, 1 NC) taking on Leslie Smith (12-8-1). This is the second time that these two ladies have squared off against each other.

There was a ton of hype around their first meeting because it was the UFC debut of Cyborg. Leslie Smith was tasked with welcoming Cyborg to the world’s premier MMA organization.

Smith had traditionally competed at 135 pounds, but she moved up to take on the challenge of Cyborg. Ultimately, Cyborg was able to get the TKO victory over Leslie Smith in the first round.

Since that loss to Cyborg back in 2016, Leslie Smith has gone 4-1. She also made the move to Bellator during this stretch of her career. This 4-1 stretch is the best five fight stretch that she’s had since making her professional debut.

The 38 year old Smith might be on the best stretch of her career, but she has a giant mountain in front of her at Bellator 259. That mountain is one of the greatest women’s mixed martial artists of all time.

Cris Cyborg made her professional debut back in 2005. That night, she was submitted in the first round by knee bar. Since that night, Cyborg has gone 23-1, 1 NC in 25 fights.

The only woman that’s made Cyborg look human is Amanda Nunes. Nunes fought Cyborg back in 2018 and knocked her out in under a minute. Granted, while Cyborg is one of the best, Amanda Nunes is by far the greatest to ever do it.

After that loss to Nunes, Cyborg fought once more in the UFC before moving to Bellator. She made her debut with the promotion and took on long reigning featherweight champion, Julia Budd.

Cyborg was able to score the fourth round TKO. She made her first title defense back in October and submitted dangerous challenger Arlene Blencowe in the second round. There is no questioning the fact that Cyborg is the best that Bellator has to offer and she will look to continue her dominance in May.