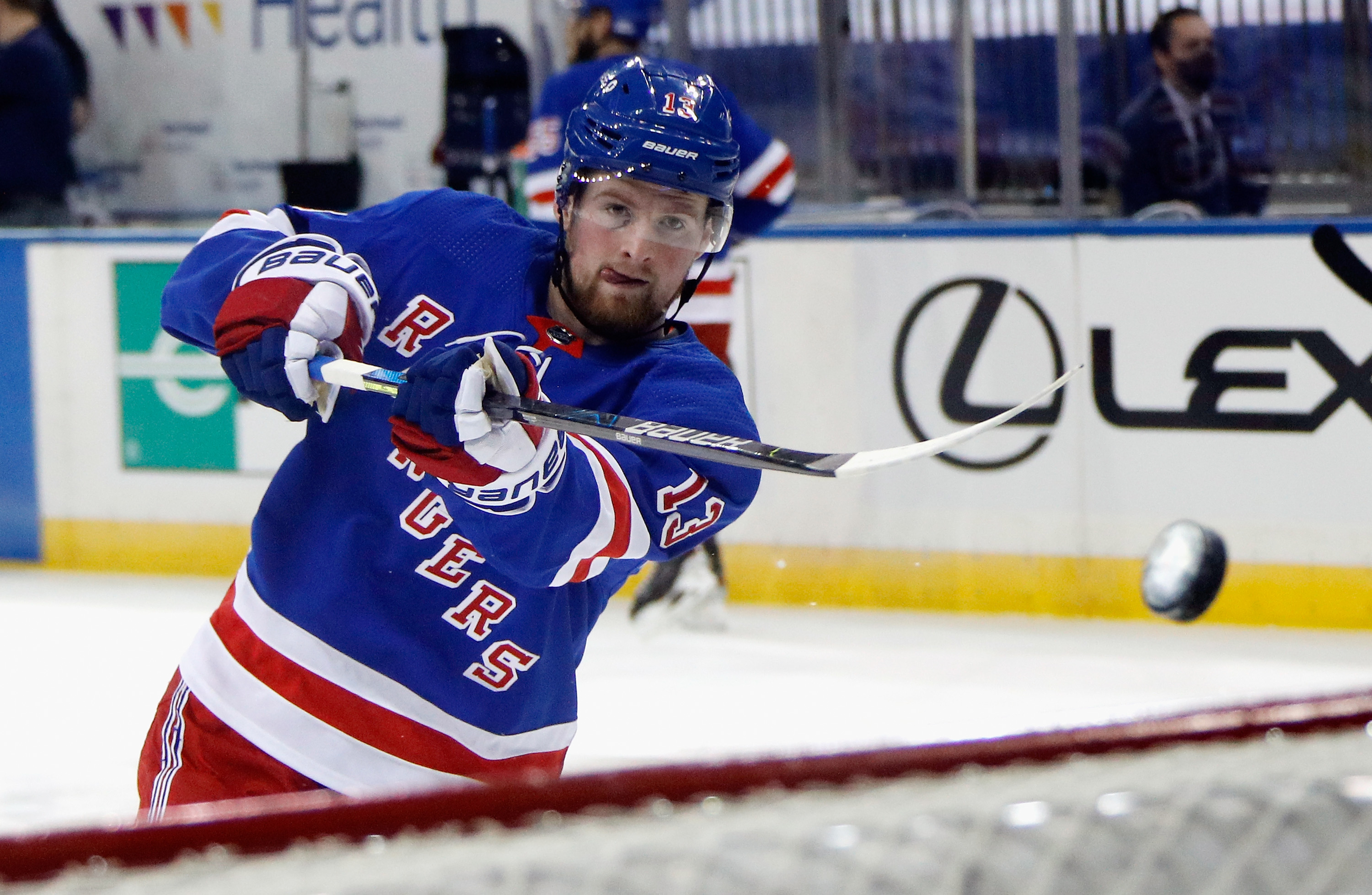 New York Rangers rookie Alexis Lafrenière has struggled to adjust to the NHL – and it’s obvious. Despite getting more than 14 minutes of ice time each game, the seventh-most among forwards on the team, he has tallied just a single point in 12 games. Rangers coach David Quinn has done his best to try and get the 2020 No. 1 overall pick going, but nothing has worked thus far. Coach Quinn’s favorite method of attempting to solve Lafrenière’s struggles has been mixing up his line-mates almost every game. Through the first 12 games of the season, the rookie has been a member of six different line combos, by far the most on the team. Here’s which combos have worked well, and others not so much:

Which Line Combo Has Worked Best for Alexis Lafrenière?

Very few probably remember that this line even existed. The third-line for the first game of the season, the three found little success while on the ice together. The line existed for only that first game and hasn’t been seen since. It must be said that perhaps coach Quinn decided to switch things up a little prematurely. After all, it was Lafrenière’s first career game and he had no preseason games to help build chemistry.

The rookie registered one shot with the line, took his lone penalty of the season, and had a -1 plus/minus in 13 minutes of ice time.

For his second career NHL game Alexis Lafrenière was moved up to the second-line. There were questions about how Lafrenière would fair playing on the right side, as he had played almost exclusively left wing while in Rimouski, but he ended up playing very well. In his first game with the line he had his best plus/minus of the season – +2. He also totaled three shots, tied for his second-most in a game.

The following game didn’t have the same success unfortunately. In 14 minutes of ice time Lafrenière managed to get only one shot on goal and had a -1 plus/minus.

In an attempt to give a scoring-spark to the rookie, coach Quinn moved the No. 1 overall pick up to the first line. On paper, the idea seemed great. Kreider’s high hockey-IQ and Zibanejad’s otherworldly goal-scoring ability would certainly provide scoring chances for Lafrenière, right? Well, not so much.

The first-line was not only a poor fit for Lafrenière, it was also statistically the worst line he was a member of. In two games, he registered just one shot and posted a -2 plus/minus while averaging 17 minutes of ice time in the two contests.

Another one-hit-wonder, the “under age 22” line existed for only one game. I personally wish coach Quinn gave this line another game to build chemistry. Something about young, underrated players on the same line works very well. For example, the line of Di Giuseppe-Chytil-Kakko that existed earlier this season was stellar prior to Chytil’s injury.

Notching three shots in under 15 minutes with the line, Lafrenière looked very comfortable.

Despite struggling mightily on the first-line two games prior, the rookie returned to the top line and showed great improvement in the January 28th contest against the Sabres. In 15 minutes of ice time, Lafrenière tallied four shots on goal, his season-high. He also scored his first, and only, NHL point in the game – an overtime goal to give the Rangers a 3-2 win.

Gonna be watching this on loop forever

It must be pointed out that the goal occurred in a 3-on-3 format, not the typical 5-on-5. Meaning Lafrenière still has not accounted for a point with any five-man line this season.

The line would end up playing four total games together, double the number any other Lafrenière line played. In those four games, he totaled nine shots and a 0 plus/minus. Having Buchnevich, a true right-winger, on the opposite side helped immensely.

The most recent line combo created by the jigsaw-puzzle-fanatic David Quinn has played two games together thus far. Neither game has been particularly inspiring. In more than 26 total minutes of ice time with the line, Lafrenière is yet to record a shot and has a -1 plus/minus.

I am fully expecting to see a new line be sent out for Friday’s game against the Bruins, as should you.

So, Which Line is Best?

If game seven of the Stanley Cup Final was tomorrow, and I had to send out a line with Alexis Lafrenière’s name on it, I’m putting him on the first line with Mika Zibanejad and Pavel Buchnevich – no questions asked. Those four games were the best Lafrenière has played all season. He was drafted by New York to score points, and playing alongside two proven veterans give him the best chance of doing that.

On the other hand, ff you’re looking for a line full of potential and the opportunity to burgeon into a line of the future, then putting him alongside Brett Howden and Kaapo Kakko would be the correct answer. Each of them has a unique skillset that would allow the other to grow. Howden’s physical-play compliments Kaako and Lafrenière’s quickness very well. Meanwhile, Kaako’s ability to shoot the puck on net would provide excellent tip-in opportunities for the other two. On top of that, Lafrenière’s passing talent would get his teammates loads of scoring chances at the net.

What do you think would be best for Alexis Lafrenière? Leave a comment below to share your thoughts on the situation.