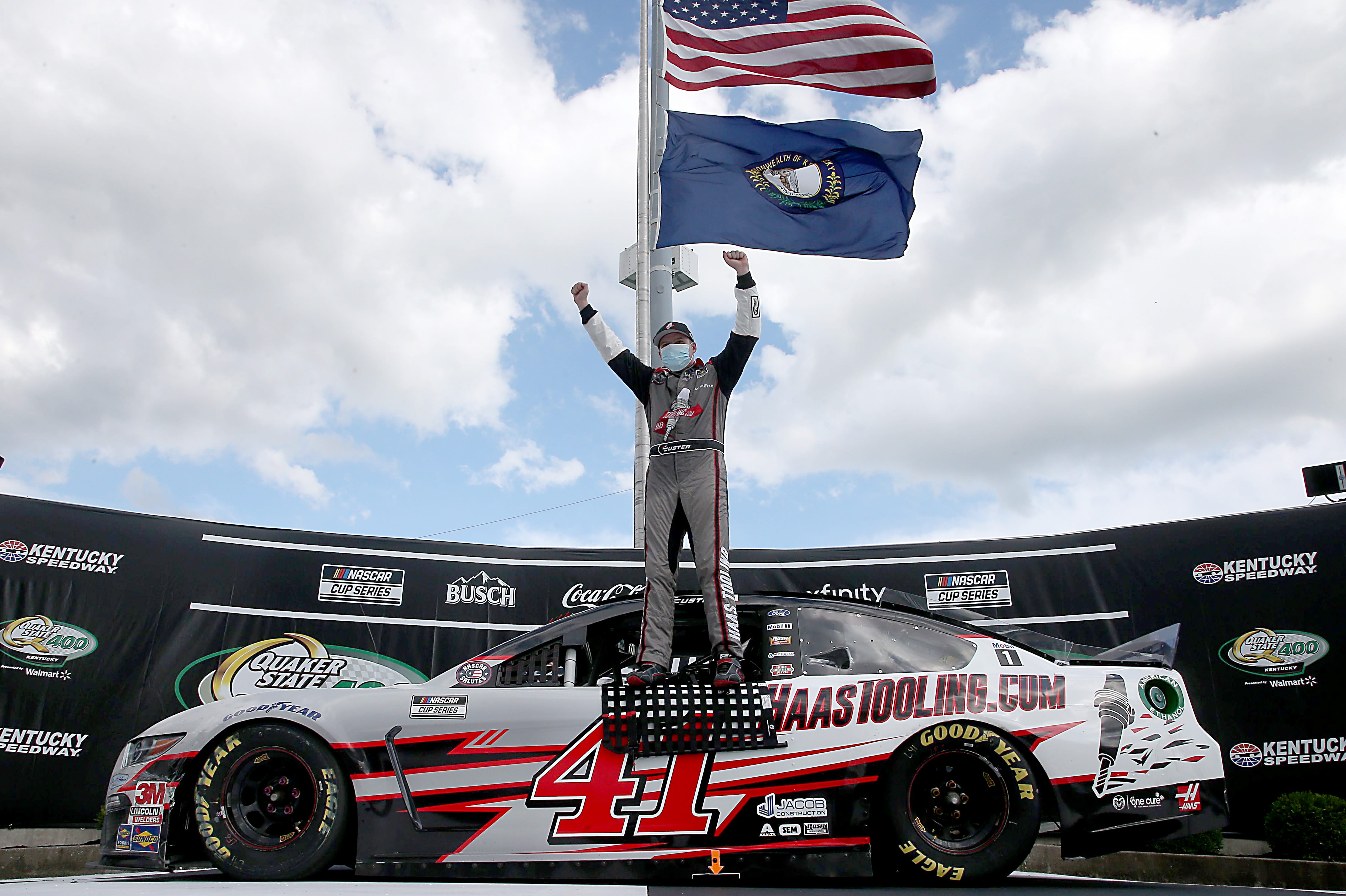 For the first time in nearly three years, a rookie won in the NASCAR Cup Series, as Cole Custer’s last-lap pass scored an improbable victory.

Kentucky is known for hosting “The Most Exciting Two Minutes in Sports” via the Kentucky Derby, whose post time has been pushed to September. The NASCAR Cup Series was happy to partly fill the gap in the meantime at Kentucky Speedway.

The final two laps of the Quaker State 400 took just over a minute to complete, but they certainly retained the level of excitement and intensity the Thoroughbreds often provide on the first Saturday in May. An hour away from Churchill Downs, Cole Custer and his No. 41 Stewart-Haas Racing Ford came out on top at the end of a two-lap shootout, the final portions of the 267-circuit event. The rookie Custer beat out the combined 84 Cup Series wins of Martin Truex Jr., Kevin Harvick, and Ryan Blaney to earn his first victory at NASCAR’s premier level.

Custer sat in the sixth position when the caution flag came out for Matt Kenseth’s spin with six laps to go. He got a good push on the outside from fellow first-win seeker Matt DiBenedetto on the outside lane to catapult past the lead trio of Harvick, Truex, and Blaney. Once Custer got into clean air at the front, he was able to hold Truex off by 0.271 seconds to earn his first win in his 20th Cup start.

Custer, 22, has finished in the top five in the final standings in each of the past three NASCAR Xfinity Series campaigns. His full-time Cup Series debut got off to a tough start with only one top-ten finish over his first 15 starts in 2020. But he built momentum with a fifth-place finish at last week’s event at Indianapolis before his historic afternoon at Kentucky. Sunday featured not only the first win for Custer, but also the first win for his crew chief Mike Shiplett. The two united for seven wins at the Xfinity level last season.

The win for Custer proved monumental in other ways on the national level as well. Custer’s win ensures him a spot in the NASCAR All-Star Race at Bristol Motor Speedway on Wednesday night (7 p.m. ET, FS1). Had Sunday’s effort fallen short, Custer would’ve had to race his way into the exhibition by winning one of the three stages of the NASCAR All-Star Open. One more driver will reach the event through a fan vote. Provided he finishes in the top 30 in the points standings, Custer has also more or less clinched a spot in the Cup Series playoffs this fall. He is the first Rookie of the Year competitor to a win a Cup Series race since Chris Buescher won the rain-shortened Pocono event in August 2016 and the first to do so without the assistance of weather since Juan Pablo Montoya at Sonoma Raceway in 2007 (Trevor Bayne and Brad Keselowski won as part-time drivers in 2011 and 2013 respectively).

Truex, a two-time winner at Kentucky, managed to hold on to the runner-up spot despite late contact with Harvick, who finished third behind DiBenedetto. Defending race-winner Kurt Busch rounded out the top five. 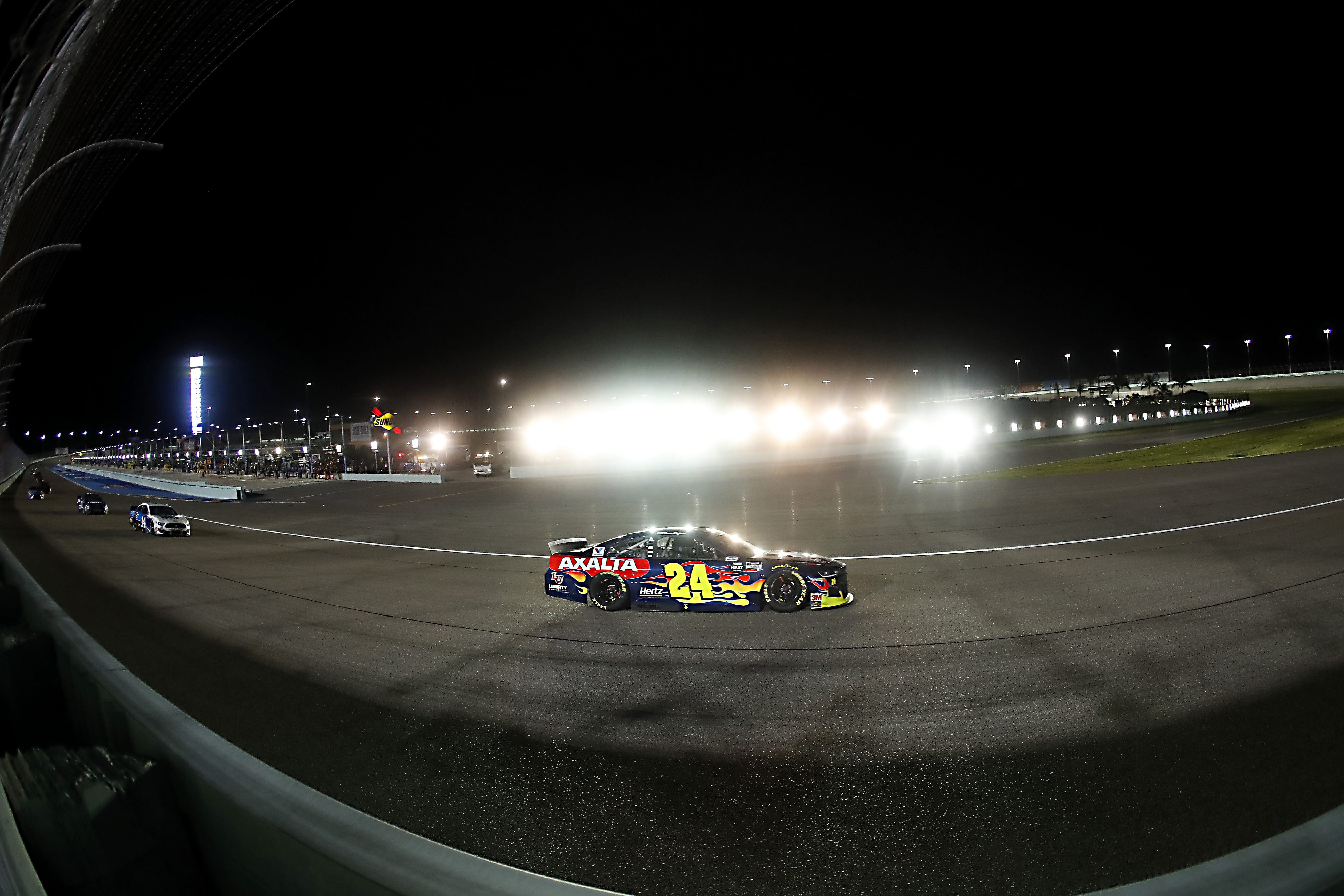 Three years into his NASCAR Cup Series career, William Byron’s pleased with his current trajectory despite a lack of victory lane visits.

The paths of William Byron and Didi Gregorius will likely never cross. After all, one’s a driver on the NASCAR Cup Series national tour and the latter is a Major League shortstop in Philadelphia. The two, however, share an exclusive, if not unspoken, bond in that each held the most unenviable position their premier circuit has ever seen.

Both Byron and Gregorius were the ones to follow the trails of athletic icons from the 1990s that changed their respective sports forever and stretched their respective careers into the new century. Each complimented their on-field/track exploits with larger-than-life personalities that brought their sport beyond the pages of, say, Sports Illustrated. But that’s how big Jeff Gordon and Derek Jeter respectively were to auto racing and baseball. Gregorius spent the past five seasons stepping out of Jeter’s cleat trails as the New York Yankees’ shortstop and made a name for himself. Such efforts were rewarded with a new, $14 million deal with the Phillies.

Three seasons in, Byron’s still working on that second part.

The 22-year-old’s spot in Hendrick Motorsports’ No. 24 Chevrolet is safe by all accounts. But a visit to victory lane still awaits 88 starts into his Cup career. Technically speaking, he isn’t the “true” successor to Gordon, as Chase Elliott took over the car for two years after Gordon’s 2015 retirement. But Elliott has since made a name for himself in the rebranded No. 9 for Hendrick, leaving the current burden to Byron, who won the 2017 Xfinity Series title less than two weeks before he turned 20.

Pressure, however, isn’t getting to Byron. He’s currently teetering on the brink of the NASCAR Cup Series playoff picture, holding the 14th of 16 postseason seeds and 48 points ahead of the cutoff. The Gordon successor is more pleased about the progress he’s making on his third go-around.

“It’s definitely easy to get frustrated with the fact that we haven’t won,” Byron said in a Friday afternoon Zoom teleconference. “I think that at this point, just with our progression we had last year, at this point we would have thought we’d have a few more late-race chances at it. I think we’ve had some cars on some days that were capable of winning.”

“But, to be honest with you, we’ve had six or seven issues this year that have really been no fault of one thing or one individual, but we’ve just as a team, we’ve just not executed in those situations. We’ve had flat tires and different issues. Those were some of our best races and some of our best chances to win and unfortunately, those kind of got washed away for us. But honestly, we just try to continue bringing the same speed and we know if we can bring that same speed that we’ve had on those weekends when things did go wrong, we’ll give ourselves a shot to win. So, yeah, we expect to win. We hope to win soon. We’ve just got to continue to bring the speed to do it and hopefully execute those moments.”

There has, indeed, been a good share of things to smile upon in the No. 24 stall. Byron’s squad won one of the two qualifying races prior to the Daytona 500 and has won stages at Darlington and Indianapolis since NASCAR returned from its coronavirus pause. Since a wreck took him out of the early stages of Daytona’s season-opener, Byron has finished 15 consecutive races, running all 32 laps in the process.

Bad luck, however, like a flat tire in the latter event on Sunday, has denied him a win and kept him on the playoff bubble. General consistency has followed. Last season saw Byron beat out Hendrick teammates Alex Bowman and Jimmie Johnson in top-ten finishes. But Byron, backed by the expertise of former Johnson pit boss Chad Knaus (who was on board for all seven of Johnson’s titles), is enthused by the progress he’s made in his third season.

“I think we’ve learned through the adversity that we’ve had this year,” Byron noticed. “Our pit crew has improved. I think that was an area that we needed to improve at the beginning of the year, and we made some changes and things to improve that. So, I think we’re there now. We just have to keep ourselves in a good points position and then, get toward the Playoffs and hopefully turn that speed and potential into there so we can maybe go farther than the Round of 12 like we did last year.”

Byron has even taught himself to use misfortune as a positive experience.

“When adversity would hit me at the beginning of my career, it really affected me toward the next week and I would really kind of race differently because of it,” Byron said in a look back. Maybe (I’d be) more conservative or more aggressive, trying to make up for it. Whereas now I feel I just don’t look at it and I don’t really pay attention to the bad fortune that happens. It definitely frustrated me a lot the day of the race, and really maybe even carries over until the next morning, but that’s really it. Once we get past the next morning, it really doesn’t affect me anymore. And that’s been a difference for me. I think that’s just maturity, probably, and the race team and myself.”