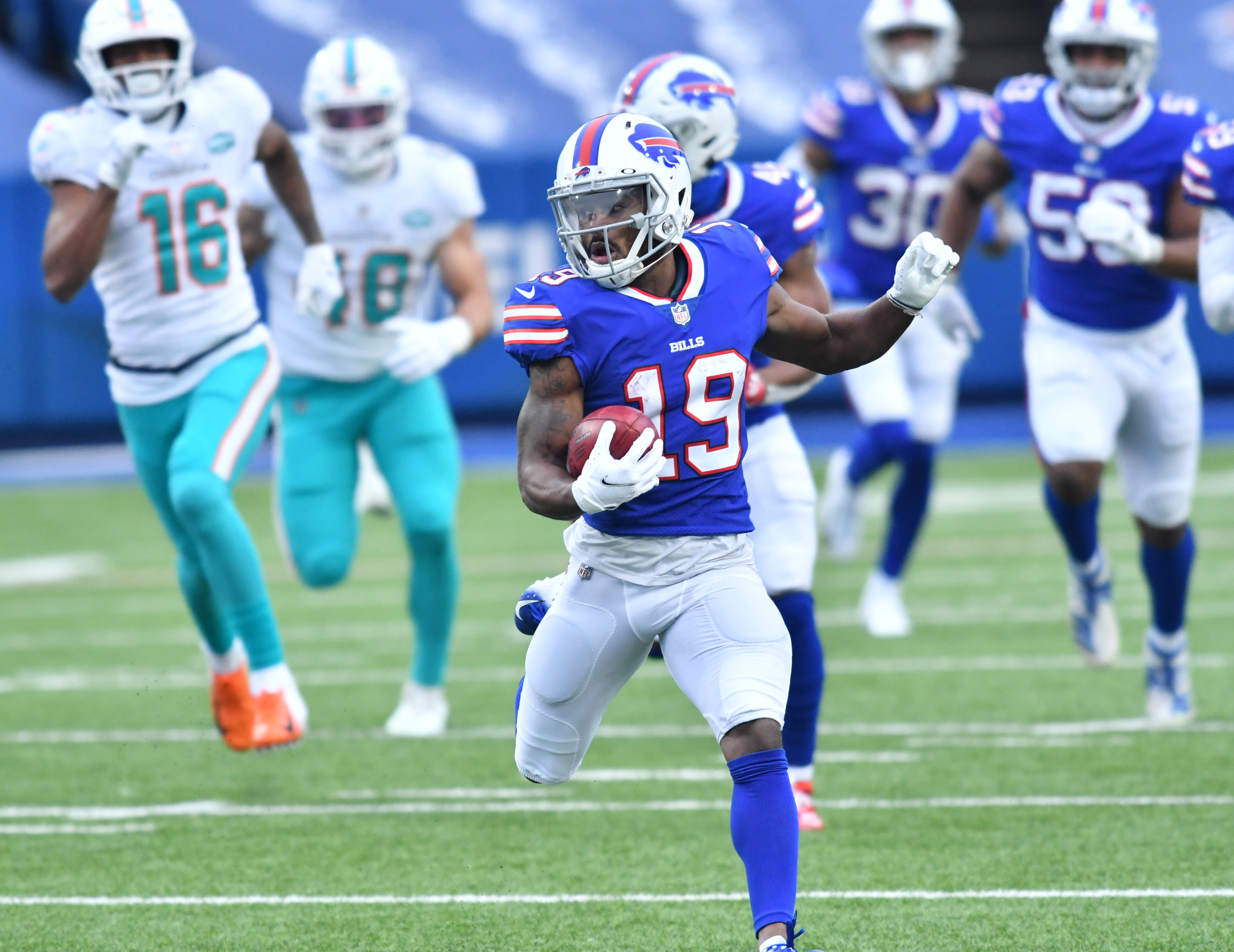 The Buffalo Bills booted the Miami Dolphins from the AFC playoff bracket with a dominant effort in Orchard Park.

The Buffalo Bills’ historic regular season ended with “Scoragami“, a No. 2 seed, and a gift for the Tennessee Titans.

Buffalo capped off a dominant stretch with a 56-26 victory over the Miami Dolphins in the 2020 regular-season finale at Bills Stadium. Isaiah McKenzie scored two touchdowns through the air, while Antonio Williams added two more on the ground. Receivers Gabriel Davis and John Brown also had touchdowns, the latter also earned 72 yards in his first action since November 15 in Arizona.

With the win, the Bills (13-3) have clinched their best win tally since 1991 and they also locked up the No. 2 seed in the upcoming AFC playoffs. While the first-round bye only applies to the top-seeded Chiefs, the Bills will be assured of a home game if they reach the Divisional round and will face the defending champion from Kansas City no earlier than the AFC title game. Their win over the Dolphins (10-6) also allowed the Tennessee Titans to clinch a playoff spot and put Miami’s own playoff dreams on life support, now needing a loss from the Indianapolis Colts to the Jacksonville Jaguars.

It’s too easy for Josh Allen 🤯

Those tuning in were treated to a lite version of Allen, who was removed in the early stages of the second half for Matt Barkley. While he struggled in the early going, a stretch that included his first interception since Week 14 against Pittsburgh, he was able to turn the game into one last case for MVP voters, tallying three touchdowns, including one to the returning John Brown, before giving way to Matt Barkley. Allen also managed to cap off his 16-game slate with one more team record, passing Drew Bledsoe’s mark in 2002 for the best passing-yard tally in a single season.

Josh Norman takes it to the house!

Norman gave fans an incredible blast from the past in the rout. In addition to two crucial pass breakups (one of which stifled a Miami comeback deep in the red zone), he took back a Tagovailoa interception 16 yards for a score to help bury their aquatic foes. It was Norman’s first touchdown since the pair he scored during his magical 2015 season in Carolina. Under Norman’s veteran leadership, Buffalo’s secondary is firing on all cylinders at the perfect time. In addition to the three turnovers, the defense let up only 171 yards from opposing throwers in their prior contests.

Often seen as a “gimmick” receiver that comes up big on trick plays, McKenzie played a larger role on the receiving front on Sunday with Cole Beasley injured and Stefon Diggs getting some rest. He took full advantage of his extended opportunity, earning new single-game bests and his first multi-touchdown game. McKenzie also scored through more traditional methods, taking back a punt 84 yards for a score that more or less put the game away early in the first half.