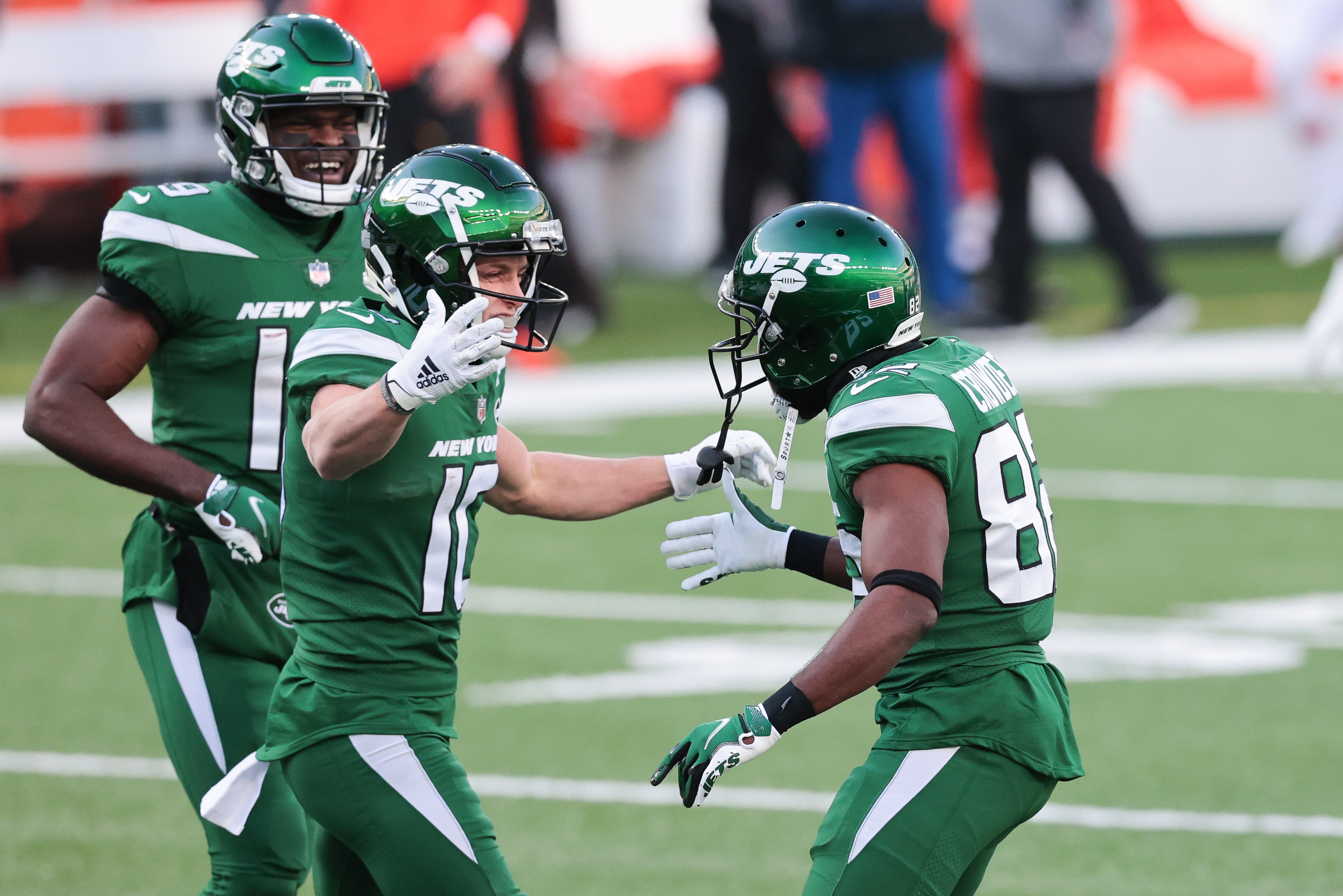 The makeover on the New York Jets’ receiving depth chart has left some of their incumbents in a slightly compromising position.

The New York Jets’ offseason renovations to their wide receiver depth chart were so transformative and aesthetically pleasing, the powers that be at HGTV probably took notice.

This time last year, the Jets’ more optimistic hopes at receiver included a first-round washout seeking to extend his career (Breshad Perriman) and an artifact from the New England antique shop that’s now playing lacrosse (Chris Hogan). That island of misfit toys didn’t even have the benefit of a minicamp or preseason to build chemistry and the absence was quite apparent once the season began.

Jets management spent the ensuing offseason restocking the arsenal in preparation for a new franchise quarterback’s arrival. Through their offensive splurging, New York has created a group that has the aura of a happy medium: not quite reminiscent of the Don Maynard/George Sauer days but certainly an upgrade over last season. Former Tennessee Titan Corey Davis is projected to be the top catcher while first-round talent Elijah Moore fell into the Jets’ lap in the early stages of round two last April. Davis’ fellow AFC South transfer Keelan Cole is likewise hopping on board.

While there’s no “established” No. 1 receiver in this group…though one could argue Davis is fairly close…the group is stacked with potential and is part of by far the most potent offensive attack they’ve had in recent memory.

The hype of the newcomers has cast a slight pall on the rest of the depth chart: what happens to the leftovers of the Adam Gase era?

As the Jets carry on with minicamp practices in Florham Park, six receivers linger from the 2020 season. The status of two may be well accounted for: Crowder has one more year on his (renegotiated) contract and the Jets have some decent hopes for 2020 second-round choice Denzel Mims, who gets another de facto rookie year after working through injuries in the last.

The outliers are all Joe Douglas signings that are now facing an uphill battle to make the roster of a team that might have some expectations attached to it. Last season’s calamities didn’t exactly give them a chance to showcase their talents. Mismanagement from a beleaguered coaching staff in over its head and injuries/medical protocols didn’t exactly give them a chance to make a case to stay for the potential glory days ahead. This week’s minicamp and the rest of the summer schedule will provide fateful opportunities to extend their NFL careers.

At the forefront of the list are Braxton Berrios and Vyncint Smith, the most experienced catchers amongst the retained. Berrios was the only listed receiver who partook in all 16 games last season, setting career-bests with 394 yards on 37 receptions. The former Patriot also served as the Jets’ primary return man, sharing kickoff duties with in-season acquisition Corey Ballentine.

While the Florham Park focus during minicamp and organized team activities have centered on newcomers like Moore and Zach Wilson, Berrios managed to stand out during the proceedings, developing an early rapport with Wilson. The Miami alum even managed to go somewhat viral when raced off to a touchdown to the tune of a farewell head nod to cornerback Jason Pinnock.

“Brax is smart guy, I think that’s one of his best attributes,” Wilson said of Berrios, per DJ Bien-Aime of the New York Daily News. “He’s a slippery player he gets in there he runs some great routes.”

Berrios has become a bit of the prototypical journeyman receiver, one that shined a team that had nothing to lose. In the midst of the Jets’ woebegone 2020, Berrios established himself as a reliable option on the screen and on the jet sweep (29 yards on a trio of rushing attempts, building on a dual-threat potential originally showcased with the Hurricanes). He also handled the primary slot duties when the top weapon, Crowder, was medically sidelined.

Back in January, before the Jets loaded up on receiving help, Berrios explained to team reporter Ethan Greenberg his ambitious desire to become a “Swiss Army Knife” in the ongoing attempt to keep his New York career rolling.

“At the end of the day, my role is to flourish wherever I’m playing,” Berrios said. “I took over in that slot position and tried to do what I could to put our team in the best position to win. When he came back, obviously that was diminished because he’s the starting slot receiver. That took reps off my count, but I tried to get in where I fit in. I would do anything. I started coming out of the backfield a lot more.”

Berrios has also held down the special teams fort as the Jets try to get over the loss of Pro Bowler Andre Roberts. In 2019, he was one of two returners to average over 10 yards on punts (the other being Diontae Johnson in Pittsburgh).

Elsewhere on the Jets’ depth chart is the case of Smith, another relatively long-tenured Jet as he enters his third year with the team. The former Houston Texan was one of the earliest signings of the offseason, rejoining on a new contract back in March. Injury issues limited to seven games and prevented him from building on career-best numbers from 2019 (225 yards on 17 receptions and a 19-yard rushing touchdown).

Smith’s misfortune opened up the opportunity for Berrios but the quick reunion (one year, $1 million contract) shows that the Jets were at least impressed enough to give him a chance to earn his roster spot back. He got off to a tough start in minicamp (a dropped ball led to a Wilson interception, per Connor Hughes of The Athletic) but later recovered with a deep diving grab from James Morgan.

The rest of the returnees are a group of speedy, unique talents who will be interesting to view through a new regime and aided with the benefit of three summer exhibitions this time around. Former college quarterback Jeff Smith earned a solid look last season with 167 receptions on 17 receptions. The prior coaching staff had high hopes for undrafted free agent Lawrence Cager, a touchdown specialist and Berrios’ fellow former Hurricane who was denied a true opportunity due to injuries, a trend that unfortunately continued during OTAs. Other comebackers include Josh Malone and DJ Montgomery.

Temptation is there to eliminate any past reminder of the past two seasons, campaigns that yielded a combined nine wins and untold amounts of offensive horror. But diamonds in the roughest of football roughs could help the Jets navigate this new terrain and help get the tenure of a new guard rife with offensive hope off to a good start.