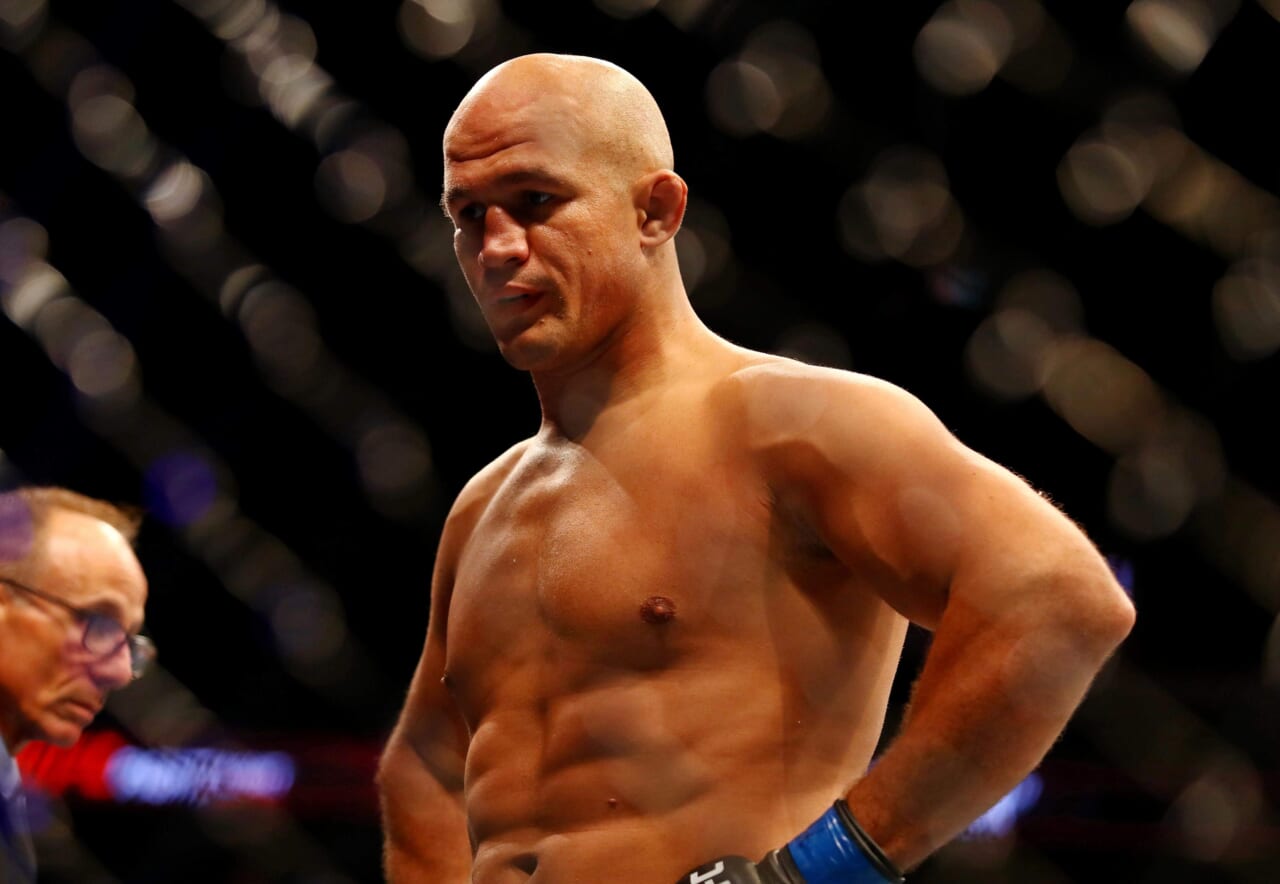 In the case of Junior Dos Santos, things have changed quickly over the past couple of years. In March of 2019, Dos Santos knocked out Derrick Lewis at a UFC Fight Night. This win put JDS in a title eliminator against Francis Ngannou.

At that point, Cigano had won three fights in a row and he looked like he was the old JDS. However, that is where things turned drastically. Dos Santos was knocked out by Ngannou. After that, he suffered three more knockout losses.

The final loss came to Ciryl Gane at UFC 256. However, that loss is currently being appealed by JDS and his team due to the final blow being around the back of the head. Nevertheless, it’s a loss as of right this second.

After that loss, the UFC decided to let Dos Santos walk. The promotion had been making cuts over the past couple of months and after the fourth straight loss, the writing was on the wall for the former heavyweight champion.

Where will JDS go after the UFC?

Dos Santos appeared on Ariel Helwani’s MMA Show this week where he talked about his future. He said that his team is talking with multiple promotions and that he is training as we speak. However, he said that he’d like at least three months to prepare for his next fight.

However, they are not the only game in town for the former UFC champion. PFL is also being rumored, however, they are looked at as a long shot given where they currently stand. PFL already has their heavyweight roster set for their 2021 season.

Time will tell what the next move will be for JDS. If I had to put money on it, I think it’s likely that he ends up in Bellator. Again, their heavyweight division could use some bigger names and despite the losing streak, Cigano would be a great signing for them.

Tonight, there has been a massive shakeup in the UFC‘s heavyweight division. The promotion has moved forward with cutting two of the all time greats. This evening we learned following a report from MMA Junkie that the UFC has cut both Junior Dos Santos (21-9) as well as Alistair Overeem (47-19, 1 NC).

A couple of months ago, Dana White announced that the promotion would be letting go of some big names in 2021. However, it’s been relatively quiet for the last couple of months which made many of us think that the cuts were over.

However, the UFC has cut a former heavyweight champion and a former title challenger. Both, Dos Santos and Alistair Overeem were ranked inside the top 12 of the heavyweight division at the time of their release.

The decision to cut Overeem is an interesting one. Alistair Overeem was just in a main event a couple of weeks ago at UFC Vegas 18. Overeem was on this last leg of his career where he was searching to become a UFC heavyweight champion.

That is one of the few things that Overeem has not achieved in his career. The Demolition man had won two in a row leading into his main event against Alexander Volkov. Overeem was dominated which derailed his heavyweight title dreams. Now, it appears that the dream will never come to fruition.

The decision to release former UFC heavyweight champion, Junior Dos Santos, made more sense than Overeem for the promotion. Despite JDS being one of the more popular fighters in the history of the division, Dos Santos has fallen on hard times.

The 37 year old has been knocked out in four consecutive fights. This four-fight losing streak followed a three-fight win streak which included a win over Derrick Lewis. After the Lewis win in 2019, it appeared that JDS had one more run towards UFC gold.

However, Francis Ngannou stopped that and then Dos Santos was knocked out three times in 2020 alone. According to reports, both heavyweights are still planning on competing. You can imagine that other promotions will be calling these two up sooner than later.

This past Saturday at UFC 256, Junior Dos Santos (21-9) took on Ciryl Gane (7-0). The former champion entered Saturday on a three-fight losing streak, but more concerning, he had been finished in all three fights.

As the fight got started, Cigano was having a tough time getting inside on Gane. Gane kept the former UFC heavyweight champion at range with a steady kick attack. Whenever JDS would get close, he was throwing everything he had into shots.

It appeared that Dos Santos was just looking for one big knockout blow at UFC 256. He wasn’t putting together crisp boxing combinations, he was head hunting for a knockout. Granted, I figured that’s how he’d need to win, however, he wasn’t sharp in doing so.

After clearly losing the first round, things went really down hill for Dos Santos in the second round. Gane started picking up the pace a little and staggered Cigano with a stiff jab. Dos Santos turned away and Gane followed the former champion to the cage.

Once the fighters were along the fence, Gane landed some massive elbows that floored the former UFC champion. Follow up shots caused the fight to get stopped and Dos Santos had suffered his fourth straight loss all by KO or TKO.

Dos Santos protested after the fight at UFC 256 was over. JDS was angry telling the referee that the shot landed to the back of his head. The shot did catch a lot of the backside of his head, however, that was because of the way JDS was turning.

The shot was not intentional and had Dos Santos not been moving, it would’ve landed on the ear. Thus, the shot was legal and the former champion suffered another defeat. I think we’ve seen the last of JDS inside the octagon.

That pains me to say as someone who’s always been a massive fan of Junior Dos Santos. I’ve always been a fan and he’s arguably the nicest guy in the UFC. However, four straight KO or TKO losses doesn’t spell well for the former champion.

Dana White said in the post-fight press conference that JDS might be done with the UFC. Considering the roster cuts that are also occurring, I think JDS will be looking for a new home after this loss.

I don’t think Dos Santos will retire. He will likely move on to another promotion, but it’ll be interesting to see where he goes. If I had to take a guess, I would say that PFL would be the favorite to land the former champion.

It has been a tough 2020 for UFC prospect Ciryl Gane (6-0). Gane came into 2020 as one of the brightest prospects in the division. A massive heavyweight with incredible striking and power to go along with it. The UFC had high hopes for Gane this year.

However, the promotion has attempted to book Gane in four fights through the year. None of which have come to fruition. He was supposed to fight today at UFC Fight Island 6, however, that fight was called off earlier this week.Â

Gane needs an opponent with name recognition and a ranking for the UFC to build him. Well, Dana White said yesterday that the promotion is working on an opponent that checks both of those boxes. That opponent would be former champion, Junior Dos Santos (21-8).

We last saw JDS back at UFC 252 when he took on Jairzinho Rozenstruik. That night, Dos Santos looked very good early on in the fight. Definitely won the first round in my opinion. However, JDS was caught with a flurry in round two that put him down for the count. His third straight TKO loss.

Thoughts on the UFC matchup?

This is a very good matchup for the UFC to make in my opinion. The former UFC champion has been struggling over the last year having suffered three straight knockout losses. JDS won three fights in a row prior to those losses.

Gane is being built up as a big time prospect for the heavyweight division. The division needs fresh faces to make things exciting, and the UFC couldn’t ask for a more exciting prospect than Ciryl Gane who currently trains with Francis Ngannou.

There will be a number of storylines that will surround this potential matchup. For Dos Santos, if he gets knocked out again, he might need to look at retirement, however, if he wins, he could look at one final run in the UFC before hanging it up.

For Gane, this is his chance to really introduce himself to the general MMA fans. Most know who Ciryl Gane is, but for the casuals, a big win over JDS would announce his arrival. It’s a fascinating matchup that I’m looking forward to.