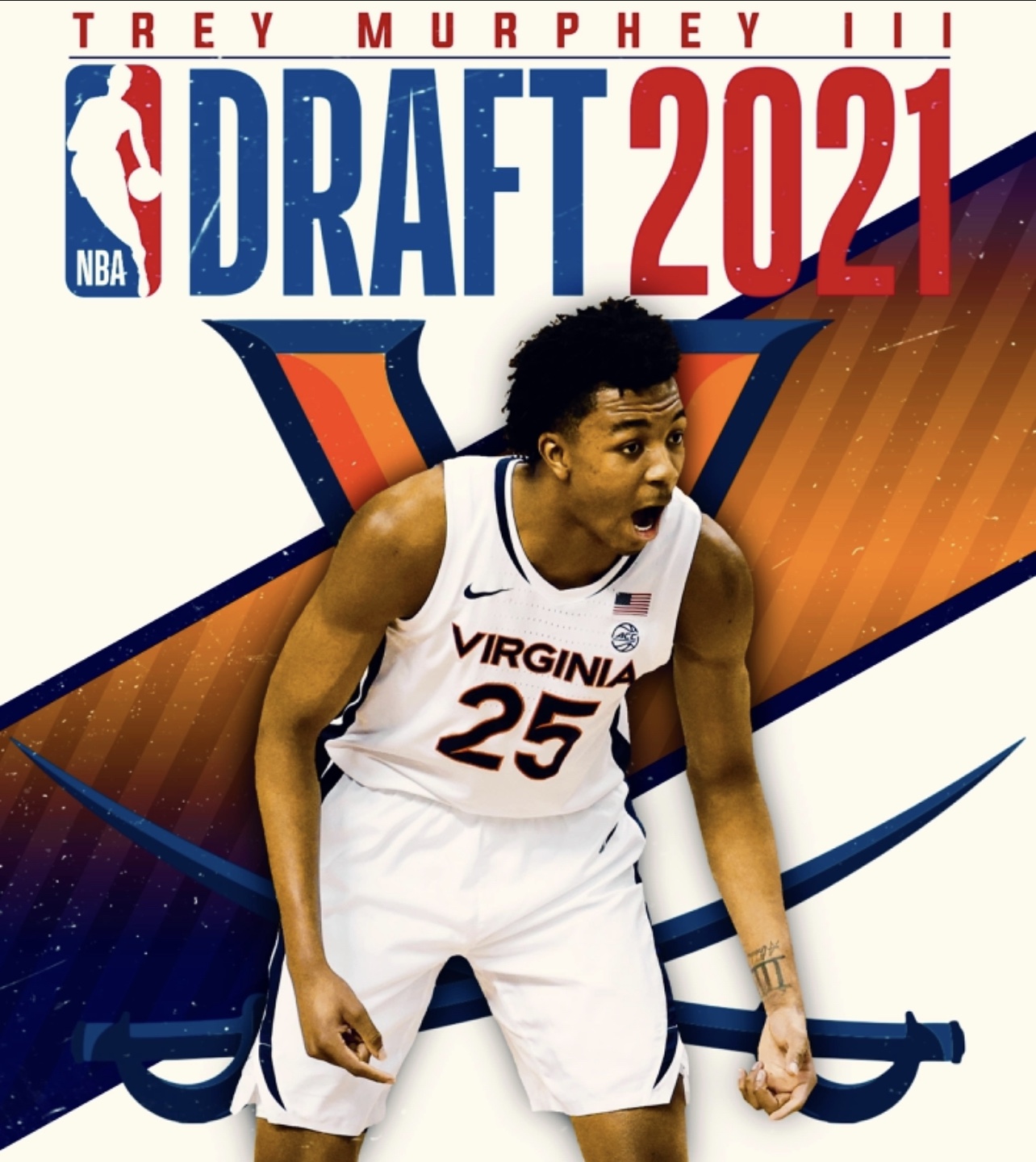 Around this time, Trey Murphy III should have been preparing for his ACC debut with the Virginia Cavaliers. But things quickly changed, just like how his stock has rapidly risen in the NBA Draft boards.

Murphy, one of the best wing shooters in the draft, is projected to go in the first round on Thursday’s NBA Draft at the Barclays Center in Brooklyn, New York. Sports Illustrated, Yahoo Sports, Basketball News, and Bleacher Report have mocked him to the New York Knicks.

That idea looked to be far-fetched a year ago when he transferred from Rice University to UVA.

“He wanted to redshirt. That was the plan but once we got him in, [we, coaches, are telling him] ‘you can’t redshirt, you’re too good. You’ll have to get bigger and stronger but we’ll figure that out as we go but we need your ability to shoot the ball, stretch the floor,” UVA associate head coach Jason Williford told Empire Sports Media.

“What he learned in a year with us is how to defend, how to be consistent on that side of the ball.  We challenged him to rebound a little better. And I think he got better with his finishing.”

Murphy went on to average 11.3 points, 3.4 rebounds, and 1.2 assists with an outstanding 50/43/93 shooting split. He is one of the most efficient college players in attacking the rim and scoring from the outside, according to Shot Quality. Combined with his length and athleticism, that skill sets make him one of the most intriguing prospects.

Two players below the age of 22 meet this criteria:

Murphy has worked out with several teams, including the Knicks, per Jonathan Macri of the Knicks Film School. But he’s been trending up in the lottery with the Golden State Warriors, who own the 7th and 14th picks, asking for a second workout, according to Bleacher Reports’ Jonathan Wasserman.

Williford was one of the first coaches who saw Murphy’s NBA potential. The 21-year assistant college basketball coach spent time in North Carolina scouting a reed-thin Murphy who starred for Cary Academy. Murphy was already a deadly shooter — 24.7 points on a 49/44/86 shooting split — out of high school, but his body was still raw.

After growing his body and his game at the much smaller Rice University in Houston, Murphy transferred to the 2019 NCAA champions for bigger exposure and development. Williford thought it was the perfect time as they were looking for someone to fill up the slot vacated by De’Andre Hunter, who moved on to the NBA as the fourth overall pick.

On track to follow Hunter in the NBA, Murphy helped himself at this year’s NBA Draft Combine in Chicago when he measured 6’7.5″ without shoes with a 7’0 wingspan.

“Once he got to that size and with his ability to shoot, I thought he got a legit chance,” Williford said. “When we got him as a transferee, I talked to several people to keep an eye on this kid. Little did I know we’d only have him for one year. I thought we’d have him for a couple of years.”

With the Cavaliers’ season cut short by a first-round upset at the hands of Ohio State after a bout with COVID-19 issues, Murphy’s junior season flew under the radar. But scouts have always raved about the combination of his length, mobility, and shooting.

“He’s a prototypical NBA player with his size and his ability to shoot. He just fits the style of what the NBA likes and what they are right now,” said Williford.

The shooting has always been there for Murphy. But at Virginia, coach Tonny Bennett wanted him to learn more about individual and team defense concepts. Often tasked to lock up the opposing team’s best player, Murphy hit some strides defensively.

(Editor’s Note: UVA coach Tony Bennett wasn’t made available for this story as he was on a scouting trip.)

“He brought [shooting] element to our team. He was able to stretch the floor and part of his reason for picking us is because he wanted to better himself defensively,” Williford said. “He got better as the year progressed. He got better defensively. That’s what he’ll bring to the next level — a guy who can play both sides of the floor, guard multiple positions and shoot the 3-ball.”

But Murphy is far from a finished product. He could have a better shot at ending in the draft lottery next year. But Williford can’t fault the kid as Murphy’s stock continued to rise after he initially entered his name in the draft to test the waters.

“Selfishly, I wished we had him for one more year. But he’s moving up in teams’ draft boards. It’s the right decision for him and his family. This is a once-in-a-lifetime dream,” Williford said.

Murphy’s work ethic can’t be questioned. He got it from his father, Kenny, Jr., a sharpshooter for the East Carolina Pirates in the late 80s.

“He’s always one of the first in the gym, getting shots up. He had a very good work ethic. One of the last [players] to get off the floor and will come in again to take extra shots. He works extra hard to try to get stronger and improve his body with our strength and conditioning coach. That was instilled in him early. He got that from his father. He was his AAU coach. He’s been doing that for as long as I’ve known him,” Williford said.

Working mostly as a catch-and-shoot player on offense at Virginia, there’s still an immense potential waiting to be unlocked. Murphy has just started scratching the surface.

“I think he’s gonna need to put on more weight. He’s a hardworking kid. He’s a gym rat. He’s gotta be bigger and stronger on who De’Andre Hunter was for us. De’Andre is a little more physical but I think Cameron Johnson of the Phoenix Suns is a good comparison for Trey,” Williford said.

While Johnson blossomed into a solid 3-and-D role player for the Suns who advanced to the NBA Finals this season, Murphy has set the bar higher. He wants to become an NBA All-Star.

“My first year, obviously, you can’t really control a lot except for your effort and energy. I’m going to have to learn to make my adjustments. Over time, I want to become an All-Star. I want to be really good at the game of basketball and I want to win a lot and play for a long time,” Murphy said after working out with the Los Angeles Lakers more than a week ago.

Williford said he spoke to about 10 different NBA teams about Murphy, with names of some of those teams escaping his memory. But he was sure none of them came from the Knicks though he noted that the Brooklyn Nets have reached out and shown a level of interest.

Williford feels that Murphy has been underrated in mock drafts. He believes Murphy could outplay his draft position wherever that would end up.

“Quite honestly, the NBA game is a lot different than college. The floor will be spaced more. I think you’ll see him get out in transition and finish plays at the rim. He’s a good jump shooter for his size, very good athlete in getting out on the floor. He’s gonna come in and knows how to play defense. He’ll be coachable. Expect him to play as hard as he can defensively and guard multiple positions,” Williford said.

But his ability to knock down outside shots will be his calling card in the NBA.

Forgoing one more year to develop in Virginia could turn out to be a blessing in disguise for Murphy.

“I think he still needs to get better but there’s no better way to get better at those at that level than working on basketball 24/7 which will be his new job,” Williford said.