ESM has you covered as the New York Jets begin the countdown to a 53-man roster in time for their Week 1 tilt against Buffalo.

Cuts have begun for the New York Jets, as the team begins to officially form a 53-man roster upon the conclusion of training camp. ESM has you updated on whose green dreams end, if only temporarily for some, as the 4 p.m. Saturday deadline for a gameday approaches

The Monmouth alum was on and off the Jets’ training roster, most recently brought back in on Tuesday. He ran for 1,995 yards last season in Long Branch, leading all backs in Football Championship Subdivision after starting his football journey at Lyndhurst High School.

One of the earliest cuts may turn out to be one of the more surprising ones. The veteran Burgess rose to the occasion when injuries struck the linebacking corps, and he earned a team-best 80 tackles as well as his first career interception and safety. (Adam Schefter)

A Friday night Instagram post from Harrison all but confirms his New York departure. Thus likely ends a three-year tenure with the Jets after coming over from Indianapolis in 2017, a stretch that saw him partake in 40 games, starting 19 of them.

The “no, not THAT Lamar Jackson” jokes have been put on hold, at least temporarily. He previously joined the team as an undrafted free agent out of Nebraska. (Brian Costello)

Hairston was one of several former Indianapolis Colts on the New York roster, coming over in exchange for a sixth-round draft pick prior to the 2019 draft. In New York’s he’s perhaps best known for earning his first career interception against Miami last season. (Rich Cimini)

A two-time All-Patriot League nominee at Holy Cross, Murray signed a reserve/future contract with the Jets last fall, shortly after he was taken by the St. Louis BattleHawks in the eighth round of the XFL Draft’s offensive line portion. (Brian Costello)

Signed by the Jets on Monday, Lewis was previously picked up by the Arizona Cardinals after going undrafted out of Air Force. He finished fourth in the Mountain West Conference last season with 15 pass defenses. (Manish Mehta)

An influx of released veteran receivers (including Hakeem Butler and Mohamed Sanu) perhaps led to the release of Cager. The Georgia alum was impressing before an injury sidelined him. (Manish Mehta)

The speedy Guidry signed with the Jets as an undrafted rookie out of Utah. His last game action saw him earn six tackles an interception in the Utes’ Alamo Bowl tilt against Texas. (Rich Cimini)

Hilbers was added as the most compensated UDFA of the bunch. After a quiet camp, the Washington product now finds himself without a home, although he could be a practice squad add. (Brian Costello)

Chesson recently earned time with the starting unit after injuries struck the receiving corps. Formerly a fourth-round pick of the Kansas City Chiefs, Chesson joined the Jets on a futures contract in January. (Adam Schefter)

Adams followed general manager Joe Douglas over from Philadelphia, where he earned 511 rushing yards as a rookie during the Eagles’ Super Bowl trek. The Jets signed him to the practice squad last season and he was promoted to the active roster in November, but never found a spot in the New York rotation.

Joe Flacco is on the active roster, leading to the release of Fales, who has also served as a reserve quarterback in Adam Gase systems in Miami and Chicago.

Campbell was added as an undrafted free agent out of West Virginia after transferring from Florida State. He had only 19 receptions with the Mountaineers, but seven went for touchdowns.

Malone spent a majority of the 2019 season on the Jets’ practice squad before a December promotion. He partook in two games but earned no receptions.

The release of Moncrief perhaps shows that the Jets are confident in the respective statuses of Breshad Perriman and Denzel Mims. The former third-round pick was signed to the team on Monday.

The former Austin Peay Governor was another recent addition who was let go. Montgomery earned some attention last preseason, starring for the Cleveland Browns.

Brown had re-signed with the Jets back in February. Last season, he earned seven receptions while subbing for Chris Herndon, including his first touchdown catch since 2016 in a win over Washington.

Kaufusi was on and off the Jets’ practice squad over the last two seasons. This summer, he was attempting to make a transition from the defensive line to tight end.

Another Douglas transplant from Philadelphia, Andrews likewise brought over a Super Bowl ring from the City of Brotherly Love. He spent parts of last season with Indianapolis, joining off the Eagles’ practice squad.

There will be Kaufusi representation on the Jets’ roster for the time being, with Bronson’s brother likewise released. He began a transition from the defensive line…and basketball…last season.

Hall was not outright released, but was instead placed on the non-football injury list. The Jets chose Hall, an All-American from Virginia, with their fifth-round pick in April.

Formerly of Alabama, Carter previously spent time (along with Hall) on the team’s reserve/COVID-19 list during this training camp period.

Farley partook in 13 games with the Jets last season, mostly working on special teams after signing with the team when Indianapolis dropped him after last season’s round of late summer cuts. 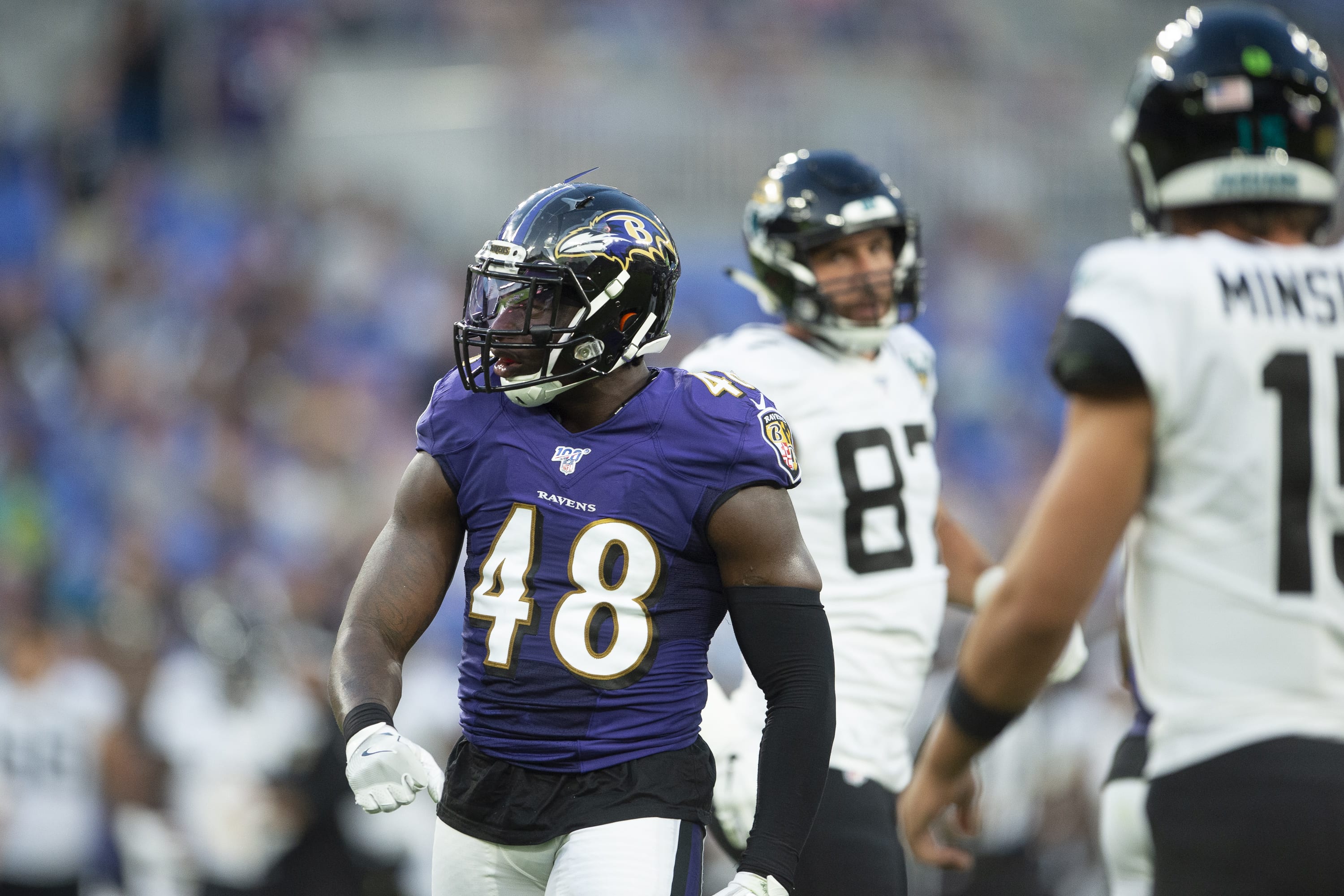 The New York Jets have signed ILB Patrick Onwuasor. Onwuasor has started 31 games in the past three years for the Baltimore Ravens. Onwuasor was seemingly the man who would take over for C.J. Mosley when he joined us last offseason. After playing 14 games and only starting 6, it was apparent that Onwuasor is better suited as a situational linebacker. Now he joins the New York Jets and will fit right into Gregg Williams’s defense.

How does he fit?

Onwuasor is a unique inside linebacker. He’s good against the run but a very below average coverage guy. He shines when he blitzes. Last season he had 3.0 sacks, 5 TFLs, and 6 QB Hits. He is a very good situational guy. Where Hewitt, Burgess, and Cashman can be depth pieces to fill in for Willamson and Mosley if they go down again, Onwuasor can be used in a multitude of scenarios.

Onwuasor can provide an inside pass rush, and that ability is something the Jets could use. Jordan Jenkins and Jamal Adams were their lead pass rushers last year. Jamal is a phenomenal player, so he often takes up double teams when he blitzes. Now Onwuasor can come in, in those situations, and capitalize off those double teams with a stable inside pass rush that could see him produce solid numbers. He is definitely a unique signing, but he will likely be a guy Gregg Williams has a lot of fun with this upcoming season.

What’s Next For Defense?

The Jets still need to improve their edge rush. Although they resigned Jordan Jenkins and will likely pick at least one edge rusher, the spot still could use a few more guys. Vinny Curry is a guy the Jets have targeted to bring a situational edge presence. The Jets could also still target Jadeveon Clowney, but it seems unlikely.

As for inside linebacker, the Jets are now loaded with talent. Mosley is the number one guy, Willamson is a talented number two. Burgess and Hewitt showed flashes of real production last year, and Cashman was a solid special teamer. With that said, Williamson would save the Jets some money if he was cut or traded, although he’s a fan favorite, with so much depth at inside linebacker, you have to wonder if his days are numbered. 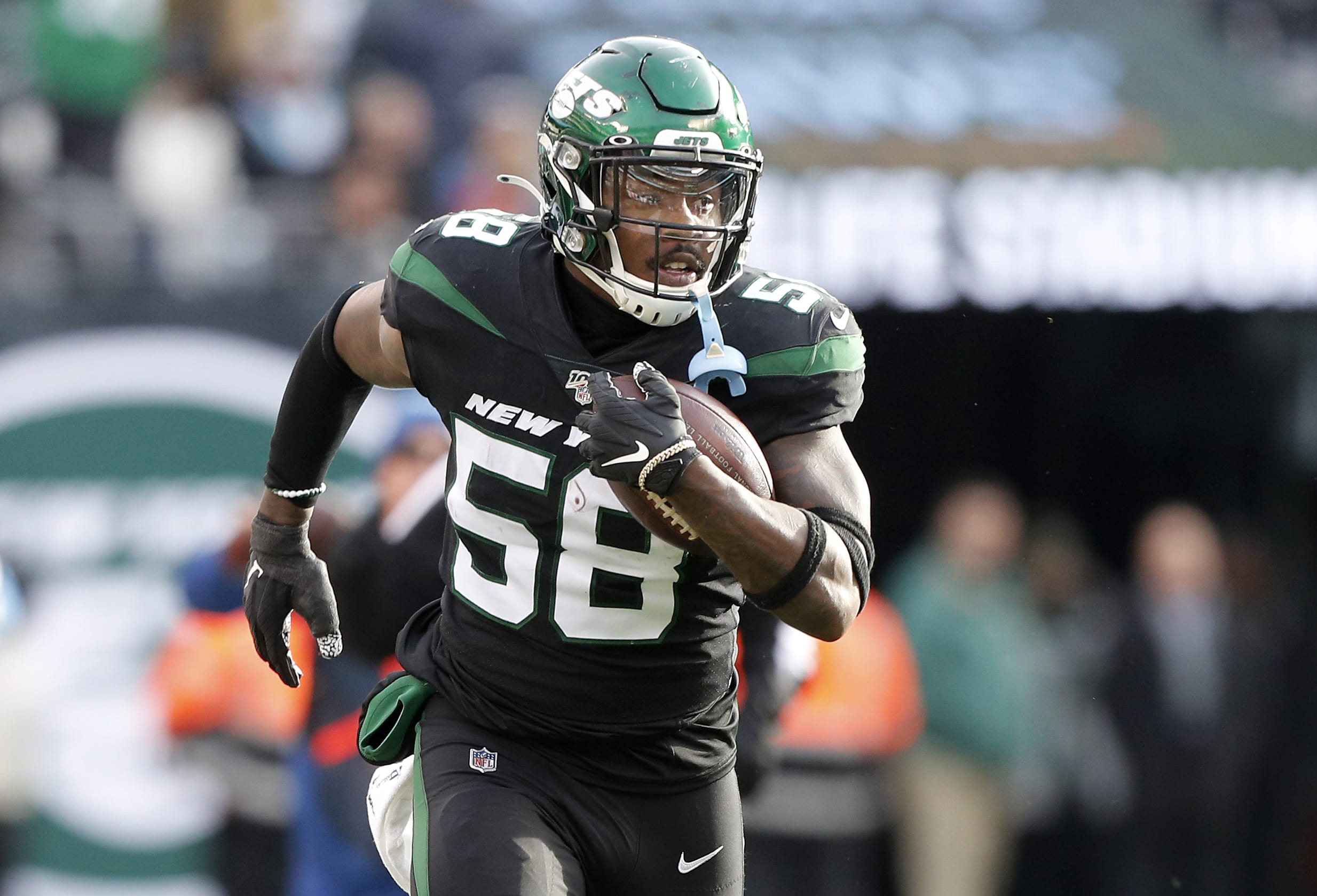 The veteran defender, he of a career-best 80 tackles last year, was another who stepped up his game when injuries struck the New York Jets.

One of the NFL’s ultimate journeymen is starting to establish a base with the New York Jets.

According to Dennis Waszak of the Associated Press, linebacker James Burgess is set to return to the team on a one-year deal. The Jets were Burgess’ sixth team over four NFL seasons.

Burgess entered the league as an undrafted free agent out of Louisville in 2016. He joined the Jets last spring and went on to have a strong preseason with 13 tackles and an interception returned for a touchdown during an exhibition win in Atlanta. Burgess was left off the Week 1 roster, but was added to the team prior to their Week 8 game in Jacksonville.

Burgess came through when the Jets’ defense suffered injuries, namely those to starting linebackers Avery Williamson and C.J. Mosley. In just 10 games, Burgess earned a career-high 80 tackles. His best performance came in a December win over Miami, where he earned 12 tackles and a forced fumble. Burgess originally spent time in Dolphins camp in 2016 and later on their roster during the 2018 and 2019 seasons.

Other Burgess highlights include a credited safety in the first meeting with Miami in November, touching a fallen Ryan Fitzpatrick in the end zone. He also his first career interception against the Buffalo Bills in the Jets’ season finale.j

Burgess has earned 163 tackles, including 4.5 sacks, over three seasons of action. He has also spent time in the systems of Chargers, Ravens, Jaguars, and Browns.

The Jets have spent the past few days bringing back several of their incumbent linebackers on one-year deals. Neville Hewitt signed over the weekend, while Jordan Jenkins was reportedly welcomed back on a $5 million contract earlier on Monday.