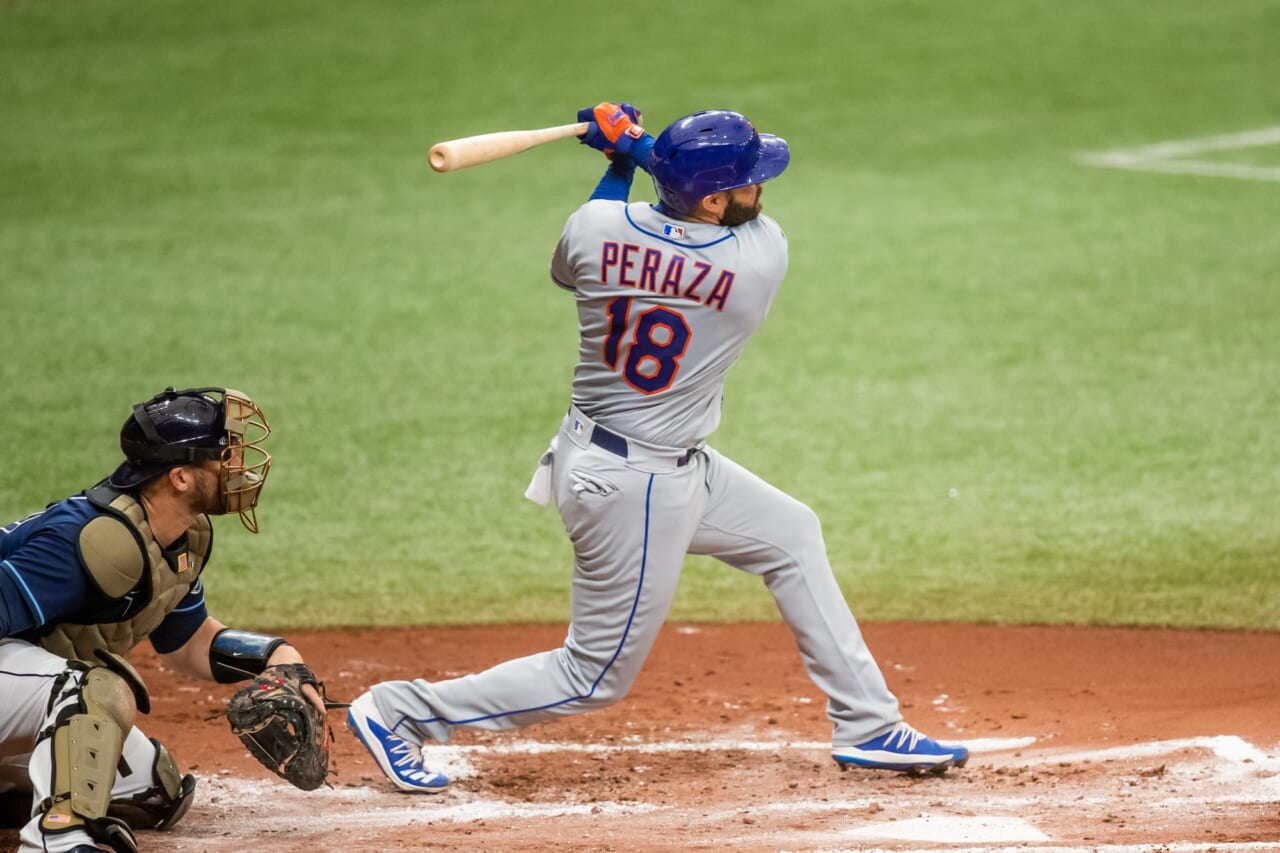 The New York Mets were pulling off miracles with their roster depth but had nothing left for the ninth inning against the Atlanta Braves. Manager Luis Rojas tried to ride Jacob Barnes for another inning, and Ronald Acuna had none of it. Acuna took his first pitch right over the center field fence to give the Braves a 5-4 walk-off win and avoid the sweep.

Ronald AcuÃ±a Jr. with a walk-off HR for the Braves! ðŸ’¥

The Mets had an opportunity to take the lead in the ninth, but two consecutive popouts stranded Cameron Maybin on third base to end the inning. Rojas had to turn to his bullpen early again after David Peterson struggled in the fifth inning. Peterson began his start with four no-hit innings but allowed three runs and five hits before being lifted in the fifth.

Drew Smith and Miguel Castro delivered scoreless outings, but Aaron Loup ran into issues in the eighth. Loup allowed three consecutive hits and allowed the Braves to tie the game. Luckily, Barnes worked out of the eighth inning jam with help from the defense of James McCann.

Maybin went from doing nothing with Cubs to making his 2021 debut as the three-hitter for the injured Mets. The lineup only had four hits, and three resulted in runs. Jonathan Villar opened up scoring with a solo home run, Jose Peraza drove in one with an RBI double, and Tomas Nido had another clutch hit with a two-run single to give them a 4-3 lead. Unfortunately, the cracks in their outfield showed as all three outfielders went hitless, and two (Maybin and Lee) recorded three strikeout games. While the offense was not there, Lee made another tremendous catch while patrolling right field.

Even if the Mets found a way to take the lead, Trevor May would have needed to pitch a third consecutive day. If they made it to extra innings, who knows what combination of pitchers would have made it to the mound. Despite the disappointing loss, the Mets left Atlanta with a rare series win and still sit in first place in the NL East. After Thursday’s day off, they will have another opportunity to take another series when they fly to Miami and face the Marlins.

David Peterson‘s first inning against the Philadelphia Phillies symbolized the New York Mets issues during their opening series. Flat, rusty, and a step slow as the Phillies tagged Peterson for four runs to put the Mets in an early first-inning hole. Rhys Hoskins‘s solo home run and Alec Bohm‘s three-run homer gave them a 4-0 lead they never looked back from in their 8-2 victory.

Peterson bookended three shutout innings with ugly first and fifth innings. Hoskins got to Peterson again with a double in the fifth, and Bryce Harper‘s drag bunt gave the Phillies a first and third situation. Peterson left the game, and Jacob Barnes made his Mets debut in relief but gave the Mets little help. J.T. Realmuto swatted Barnes’s first pitch over the right field fence to put the game out of reach at 7-1.

The Mets offense made Phillies ace Aaron Nola worked extremely hard through his four innings of work. Nola worked around eight baserunners to hold the Mets to one run on 92 pitches. The ability to get runners on base but failure to score them was the story of their game. They recorded 11 hits but left 14 runners on base and went 1-for-12 with runners in scoring position. Combine all those factors, and you get their two-run effort. Michael Conforto struggled the most in his 0-for-5 day with two strikeouts and nine left on base.

The silver lining from the game is Joey Lucchesi‘s two innings to finish off the loss. Lucchesi struck out two and only allowed one hit as he tries to keep himself ready for a start next week. Jonathan Villar also finished a home run shy of the cycle.

A 1-2 start to year always stings, but a full 162 game season allows plenty of time to rebound from a rough start. The Mets return to Citi Field for their home opener, with Taijuan Walker making his Mets debut. They will face the Miami Marlins, who have not announced a starter yet due to the current injuries in their rotation. The first pitch from Queens is at 1:05 p.m. 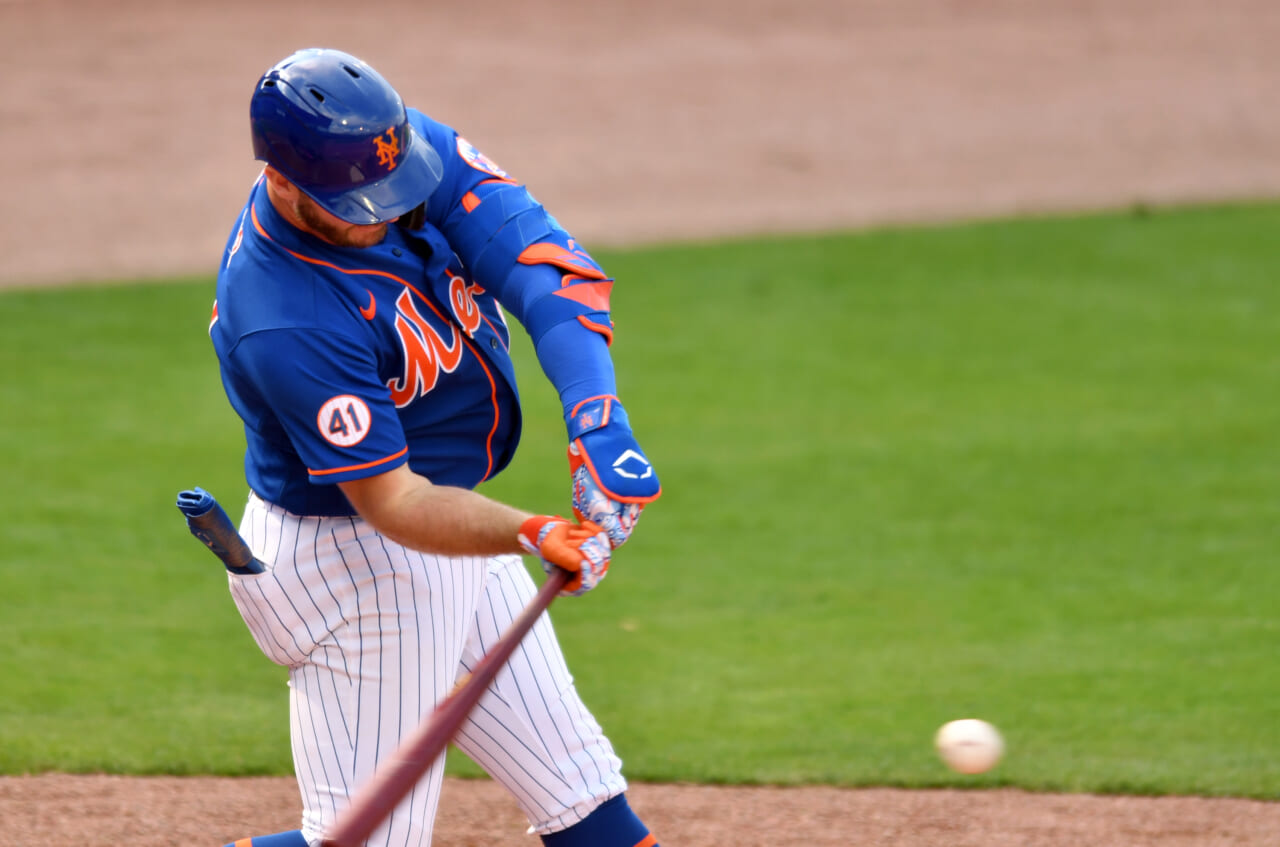 The New York Mets offense was rolling on all cylinders during their 8-3 win against the Houston Astros. 12 hits, 5 for extra bases, helped support another terrific outing from Joey Lucchesi. He had some help from Jacob Barnes, who struck out two as the Mets opener, a role Manager Luis Rojas seems to favor Barnes in.

Lucchesi threw 4.2 innings in “relief” and held the Astros to one run, and struck out four. His only blemish came on an Alex Bregman solo-home run in his final inning of work. The opener worked out perfectly for Lucchesi because he retired the first eight batters he faced. Trevor May was touched up for a Yordan Alvarez home run in his inning of work but struck out two batters. Jerry Blevins finished off the ninth inning as he tries to earn the final spot in the Mets bullpen.

Francisco Lindor had a sparkling day on both sides of the ball. Lindor made a terrific play, ranging to the first base side of the field to throw out a base runner. He was a perfect 3-for-3 with three RBIs and a walk. Dominic Smith also homered twice and went back-to-back with Pete Alonso in the seventh inning.

On Sunday, the Mets head back to Jupiter to face the Miami Marlins with Mike Montgomery (1-0, 0.00 ERA) making the start. The first pitch is at 1:10 p.m. ET but will not be on any of the Mets networks.

A team can never have enough bullpen arms. Today’s game is especially demanding in that area, as starters’ average innings per turn is decreasing and relievers take a heavier load. The New York Mets know this, as the bullpen failed in the shortened 2020 season. Edwin Diaz returned to elite status, but Dellin Betances, Brad Brach, and others failed to reach expectations.

That’s why the New York Mets want to address the area during the offseason. In late October, they claimed right-handed pitcher Jacob Barnes off waivers from the Los Angeles Angels. Today, the team and the hurler avoided arbitration by agreeing to a one-year, $750,000 contract, according to Bob Nightengale.

The pact reportedly comes with some incentives that could net Barnes and additional $100,000. If you look at the surface numbers, the Mets aren’t getting a good reliever in Barnes, as he had a 5.50 ERA with the Angeles in 18 frames.

However, Barnes is a savvy addition to a club in need of several quality bullpen arms. He carries very good potential, as he had a 24/4 K/BB in those 18 innings and his fielding independent pitching (FIP) was a fantastic 2.25.

The Mets are making a worthwhile gamble

The Mets know they are getting a pitcher with iffy control (4.00 BB/9 rate in 198 career innings) but one who is capable of striking out a batter per frame, as evidenced by his 209 punchouts over that timeframe.

The Mets are hoping that pitching coach Jeremy Hefner helps him refine his repertoire and get the best possible results out of Barnes. If he has a good spring, he has a very good chance of starting the year in the active roster and contribute from the very beginning.

Barnes was eligible for salary arbitration. The deadline for the Mets, and all teams, to tender contracts to arbitration-eligible ballplayers is this Wednesday at 8 p.m.

The first move the New York Mets made under Steve Cohen’s ownership came on the waiver wire. Stony Brook product Nick Tropeano was claimed from the Pittsburgh Pirates and Jacob Barnes from the Los Angeles Angels. Both are low risk, high reward options for the 40-man roster in 2021.

Four scoreless for Nick Tropeano in his Bucco debut.#LetsGoBucs pic.twitter.com/djh8F2fCpH

Tropeano converted to a full-time reliever with the Pirates and showed a major improvement in his career. Despite never pitching in a game that finished within four runs, he was very effective with a 1.15 ERA in 15.2 innings pitched. Tropeano also had reverse splits, holding left-handed hitters to a .067 average while righties batted .289.

One of the keys to success was the increased usage of his slider. Tropeano threw the slider 31% of the time, a seven percent increase from the prior season. His slider’s runs above average were 2.3 compared to -4.3 back in 2018. One thing to look out for was a BABIP of .317 with his 28.8% strikeouts rate as hitters would find success when they put the ball in play against him.

Barnes is another right-handed reliever but has struggled with a 6.75 ERA in 50.2 innings since 2019. He lacks a secondary pitch after his cutter and four-sean fastball and has only thrown four pitches that were not tracked his main two since 2019. What Barnes lacks in pitch quantity, he makes up in the velocity and strikeout department.

Barnes fastball averages 95 mph, and batters only hit .174 against it during the 2020 season. His cutter is slightly under 90 but has excellent movement. It is a pitch that seems to be very hit or miss for Barnes as it has a 41.5% whiff rate, but batters hit .311 against it in 2020. It will be interesting to see how the Mets make his cutter a better weapon because the correct improvements could bring him back to the 3.54 ERA reliever he was during the first three seasons of his career.

Overall, these are good moves because of where they are slotted to fit in on the roster. If they were signed to confirmed 25-man roster spots, it would be questionable because of their lack of consistent success. As players who deepen the 40-man roster and have high upside, they become solid pickups before free agency opens up next week.