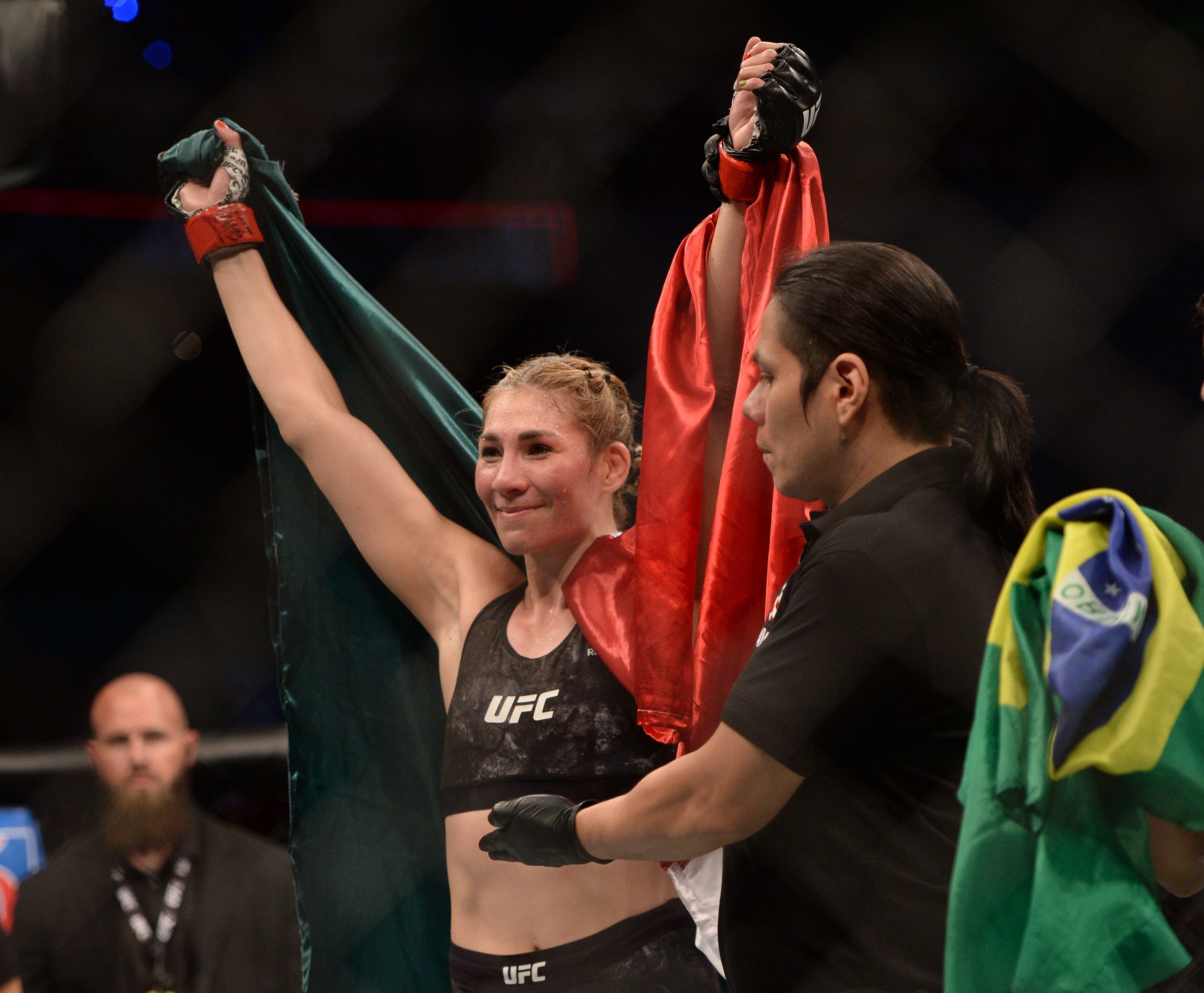 The UFC has finalized a matchup between top five bantamweights that will take place in July. Milenio was the first to report this evening that the promotion was booking a matchup between Irene Aldana (12-6) and Yana Kunitskaya (14-5, 1 NC).

The fight will take place at UFC 264 on July 10th. For Aldana, this will be her first fight since she lost to Holly Holm in October on Fight Island. Had Aldana won that fight, she might have earned herself a UFC title shot.

Heading into that fight, Aldana had gone 5-1 in her previous six UFC fights. Her best performance inside the octagon came at UFC 245 when she put top contender Ketlen Viera to sleep in the first round.

Aldana has incredible boxing and striking. However, she just couldn’t keep up with Holly Holm who looked better than ever in October. With how Amanda Nunes has dominated the UFC women’s divisions, she’s needing new contenders.

Neither one of these ladies has had a shot at Nunes. If Aldana is able to defeat Kunitskaya and do it impressively, she could be on the short list for Nunes assuming Nunes beats Julianna Pena at UFC 265.

Yana Kunitskaya had a UFC title opportunity back in 2018. Kunitskaya fought at featherweight and took on Cris Cyborg. Cyborg finished Kunitskaya in the first round and Kunitskaya returned to her natural division of 135 pounds.

Since moving back down to 135, Kunitskaya has gone 4-1. The lone loss came to Aspen Ladd in 2019 when she lost by TKO in the third round. Since then, she’s won back-to-back fights.

The last time we saw her was in February when she took on Ketlen Viera. The fight was pretty close, but a good closing round sealed the deal for Kunitskaya. If she’s able to defeat Aldana at UFC 264, it will be massive for her spot in the division. There is a lot on the line in this bantamweight matchup. 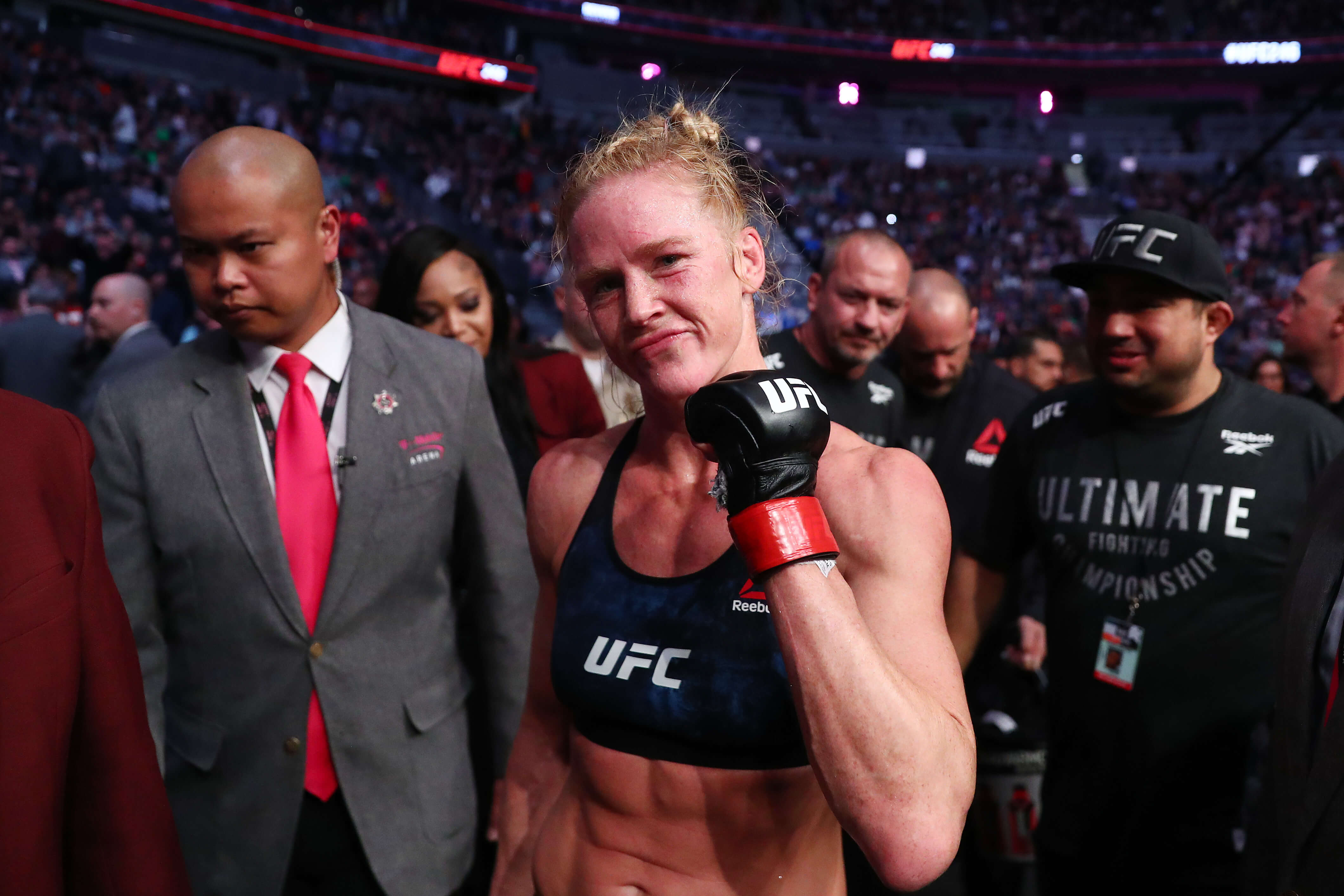 In the main event of tonight’s UFC Fight Island 4, former champion Holly Holm (14-5) took on Irene Aldana (12-6) in a bantamweight contest. Both of these ladies were looking to make their case as a top contender in the UFC bantamweight division.

Both of these ladies came into tonight after winning in their last fight. Aldana had won five of her last six fights including a highlight reel knockout over Ketlen Vieira. Holm came into the contest coming off of a lackluster win over Raquel Pennington earlier this year.

As the main event started, it was very apparent that the former UFC bantamweight champion was there tonight to make a statement. Aldana was looked at as the next challenger to Amanda Nunes‘ title, but Holm was having none of it tonight.

Aldana seemed to be looking for one big power shot early on, but Holm was lighting Aldana up with combinations. Holly Holm used constant pressure and constant flurries to stifle Irene Aldana in the first round. Holm also started mixing in her wrestling late in the first round.

Throughout the rest of the fight, Holm continued to overwhelm Aldana. Whether it was big flurries on takedown attempts, Aldana had no room to breathe. In the third round, Holm got Aldana down and mounted her. Holm was able to land massive shots in the mount.

The confidence level was never there tonight for Irene Aldana. In the final couple of rounds, Aldana tried to push forward, but Holm peppered her with counter shots as she tried. A truly dominant performance for the former UFC champion who won the fight by unanimous decision (50-44, 50-45, 50-45).

What’s next for Holm after UFC Fight Island 4

Holly Holm made a massive statement at UFC Fight Island 4. There were a lot of people, including myself, who had been down on Holm. Especially after her last performance against Raquel Pennington. However, Holm shut everyone up tonight.

It was a very well-rounded performance from the former champion. So what is next for Holly Holm? Despite the dominant victory, I don’t think that she’s ready yet for another shot at Amanda Nunes. Holm was knocked out in the first round by Nunes at UFC 239.

In my opinion, the perfect fight would be the rematch with Germaine de Randamie (10-4). De Randamie fought earlier in the evening and put Juliana Pena to sleep. These two ladies fought back at UFC 208 and the fight was littered with controversy.

On paper, both of these ladies deserve a title shot. However, given their history with Nunes, it’s hard to build up the fight. I think the UFC should pair these two, and the winner would generate a clear number one contender in the bantamweight division.

Tomorrow night, the UFC returns for their fourth fight night card on Fight Island. In the main event of the evening, we have a women’s bantamweight contest between former champion Holly Holm (13-5) and Irene Aldana (12-5).

Holm just turned 38 years old a couple of months ago, but the former UFC champion wants to capture gold one more time before she hangs it up. Saying this week at the media day that she wants to retire as UFC champion.

Irene Aldana is looking for the biggest win of her UFC career tomorrow night. Aldana is coming off of a huge knockout of Ketlen Vieira back in December last year at UFC 245. A win over Holm could give Aldana a shot Amanda Nunes.

This is a very intriguing matchup on paper for the UFC. Aldana has really crisp boxing skills which could give her some big moments on the feet. However, she’s going up against an elite striker who’s a former world champion in boxing.

Despite her credentials, Holm has been more of a point fighter in her UFC career. She has two highlight reel headkick knockouts, but outside of that, it’s usually not the most entertaining fight when Holm is in the cage.

She didn’t impress anyone back at UFC 246 in her rematch with Raquel Pennington. Holm used a lot of grappling and clinching to point her way to a decision. Even when she’s striking, she uses kicks to score points and keep range versus doing serious damage.

Aldana has very good pop in her hands. She can crack with the best of them at 135 pounds. Her knockout of Vieira is truly something special to watch as she used a jumping left hook to floor the previously unbeaten Brazilian.

Aldana is a very intriguing fighter in the division considering she’s won of the few that hasn’t fought Amanda Nunes yet. She’s 5-1 in her last six fights with the lone loss being a very close split decision loss to Raquel Pennington.

In this fight, I’m not really liking Aldana’s chances. While she certainly has the skills to get it done, I’m afraid she’s going to be out-pointed by Holm. Look for Holm to use her kicks and mix in some grappling to keep Aldana guessing and off her game.

There are some pretty decent fights on the UFC Fight Island 4 card. It’s not the sexiest card in the world, but there are some interesting fights. One of the earlier fights in the evening features the return of Carlos Condit (30-13) taking on Court McGee (19-9).

The fight I’m really looking forward to is the bantamweight contest between Germaine de Randamie (9-4) and Julianna Pena (9-3). To me this fight is better than the UFC Fight Island 4 main event. I think whoever wins the most impressively out of those two contests could be the next UFC title challenger.

The UFC has lost it’s main event for their return to Las Vegas. It was reported today that Holly Holm (13-5) vs Irene Aldana (12-5) is off after Aldana had to pull out.

Next weekend’s Holly Holm vs Irene Aldana main event is off, sources say, because Aldana had to withdraw.

The new main will be Derek Brunson vs. Edmen Shahbazyan.

As referenced in the tweet, the UFC has promoted the middleweight clash between Edmen Shahbazyan (11-0) and Derek Brunson (20-7) to the main event.

When it was first announced that the UFC would return to Vegas with Holm-Aldana as the headliner, there was a lot of criticism from fans.

The fight was not sexy at all when it comes to a main event. The fight rivaled Calvillo-Eye in lack of popularity among the MMA fans.

This new main event is an absolute banger. Shahbazyan is arguably the most exciting prospect in the UFC. At just 22-years old, Shahbazyan already looks like a future world champion.

Every test that has been thrown his way, he’s passed with flying colors. He had a massive challenge against Brad Tavares at UFC 244, and Shahbazyan knocked him out in the first round.

Brunson is a tough out for anyone in the middleweight division. If Shahbazyan can get passed Brunson, you can be assured he’s only a fight or two away from getting a shot at UFC gold.

Things are fast and furious in the UFC right now. Another Fight Night is coming to the APEX on August 1st, and a former champion will be headlining the card.

Another chance to climb the ladder for Holly Holm

Holly Holm (13-5) and Irene Aldana (12-5) will be going head to head in a women’s bantamweight matchup that will headline the UFC‘s 8/1 card. Holm, the former UFC bantamweight champion, bounced back after a loss to Amanda Nunes with a win over Raquel Pennington back at UFC 246. Holm has consistently been one of the best in the world over the last five years, and has appeared in five UFC title fights. For Holm, a win in this matchup could get her closer to a sixth title fight. Holm is just 1-4 in her championship fights, but she remains confident that she could capture UFC gold again one day.

Aldana will be making her ninth appearance in the UFC‘s bantamweight division. Aldana got off to a rough start in her UFC career losing her first two fights, but since then, she’s gone 5-1 with her lone loss being a split decision loss to former title challenger, Raquel Pennington. Aldana won her last fight by first round knockout, and a win over Holm could mean a title shot for Aldana. If you look at the landscape of the bantamweight division, there is no clear challenger for champion, Amanda Nunes. If Aldana can come out and impressively beat the former champion, she has just as good of an argument as anyone for the next shot at Nunes.

In addition to announcing the Holm/Aldana main event, it was revealed that Derek Brunson (20-7) and Edmen Shahbazyan (11-0) would also be fighting on the August 1st card. This is the third time that this anticipated middleweight contest has been booked. Shahbazyan is a very exciting 22-year-old prospect who is coming off of a head kick knockout over Brad Tavares back at UFC 244. Brunson is a big test for Shahbazyan. Brunson has been in there with the best in the world from champion, Israel Adesanya, to former champion, Robert Whittaker, to the great Anderson Silva. A win over Brunson would be massive for Shahbazyan, but a win for Brunson would inch him closer to a title shot after three consecutive wins.