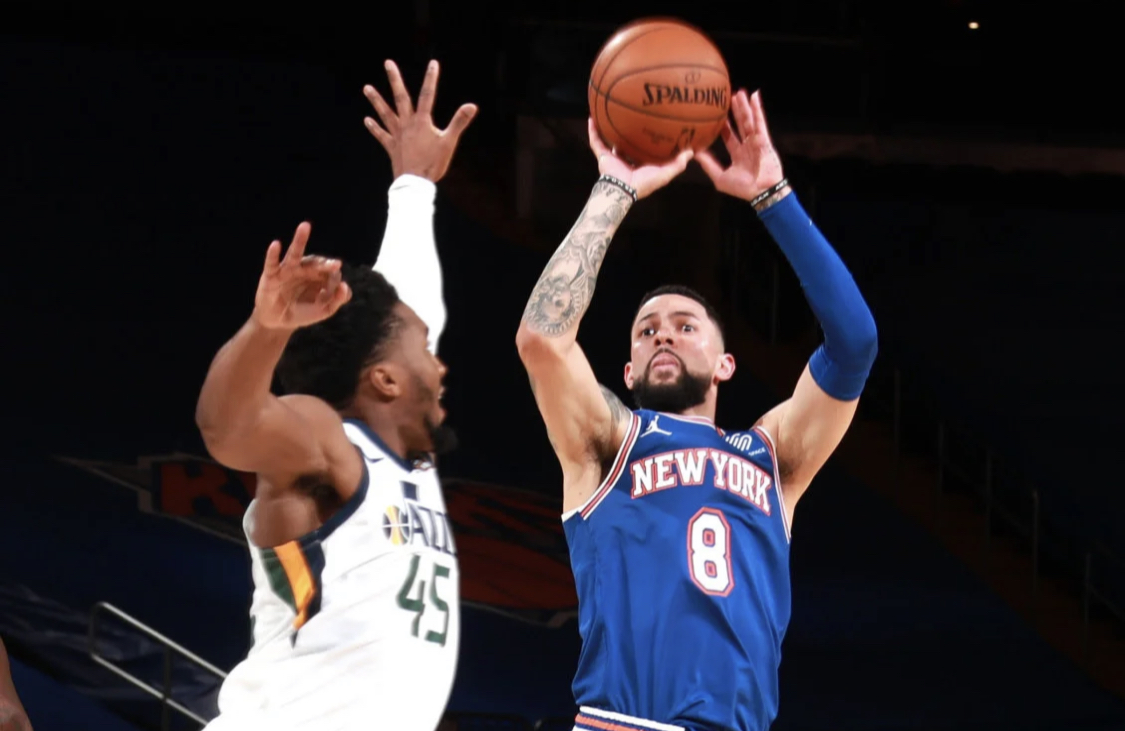 The New York Knicks went hot and cold in Utah, wrapping up their West Coast trip with a disappointing 108-94 loss to the Jazz Tuesday night.

Rivers was on fire in the first half with 25 points on a perfect 10-for-10 shooting. Then he went scoreless in the second half.

The Knicks appeared to be on their way to an encore of their Jazz massacre at The Garden when they erected a 15-point lead in the second quarter. They even held a 13-point lead at the break.

But it went downhill from there.

Mitchell started the game 0-for-10 before finishing with nine points on 3-for-15 shooting.

But the Jazz drew double-digit scoring from five other players led by O’Neale and Conley.

Conley fired 14 of his 19 points in the third quarter, while O’Neale had nine of his 20 in the fourth quarter to seal the Knicks’ fate.

Rivers’ hot hands went cold after being hit with his third foul late in the second quarter. He was never the same again.

“Yeah, I just felt like in that stretch with the way it was going offensively, I thought we would do what we did, but it did cross my mind to leave him out there,” Tom Thibodeau replied when asked if he felt he should’ve gambled with Rivers despite nursing three fouls.

Rivers missed his four shots in the second half and had a mental lapse, fouling Conley late in the third quarter when he thought the Knicks still had a foul to give.

The Jazz took over from there.

A 10-0 start was all they needed to suck the life out of the weary Knicks, who were playing the tail end of a four-game road trip.

The Knicks finished the trip losing three straight after an impressive win against Golden State Warriors. They slid outside the top eight in the East with an 8-11 win-loss record.

Meanwhile, the Jazz have extended their league’s hottest win streak to nine, which started, ironically, after losing to the Knicks in New York in January.

Rudy Gobert was also instrumental in the Jazz victory with a monster performance (18 points, 19 rebounds, and four blocks).

Filipino-American guard Jordan Clarkson continued making an early case for the Sixth Man of the Year with 13 points, five rebounds, four assists, and three steals off the bench for the Jazz.

RJ Barrett rebounded from his single-digit performance in a loss to Portland with 17 points on 7-11 (3-for-3 from 3) shooting from the field. Julius Randle had a double-double (18 points, 10 rebounds, and four assists), but the rest of the Knicks struggled.

Immanuel Quickley, who sizzled for a career-high 31 points against the Trail Blazers, had his worst shooting night going 1-for-11 for six points.

The Knicks will head home and host the Cleveland Cavaliers and the Los Angeles Clippers on Friday and Sunday, respectively.