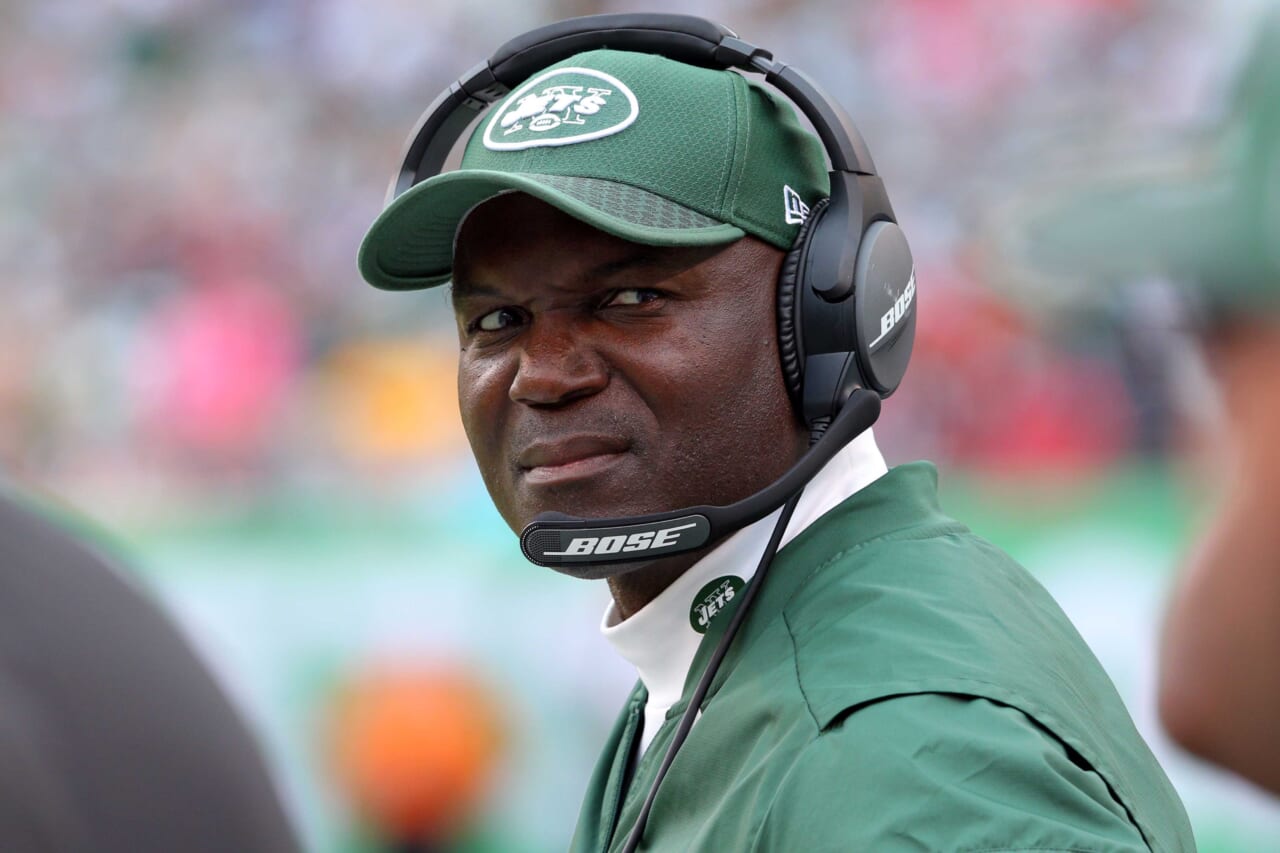 The NFL is full of unusual phenomena. For example, fans rue the creation of the fumble/touchback rule seen in Sunday’s AFC Divisional playoff action. A team based in the Dallas-Fort Worth metroplex partakes in the NFC East competition.

But perhaps the NFL’s most bizarre trend is trying to force a square peg into a round hole and trying to make the same few names work in different places.

The New York Jets recently went through this trend with Adam Gase, hiring him in 2019 after a modest tenure with Miami. Despite Gase’s losing record (23-25 and one forgettable playoff appearance) and a propensity for his pupils to succeed elsewhere (Ryan Tannehill, Kenyan Drake), the Jets were convinced that he was the missing ingredient and perfect overseer of Sam Darnold’s developmental years. Two years and nine wins later, Gase is gone and the Jets are in even more dire straits.

This time around, the Jets opted for a fresh face in former San Francisco 49ers defensive coordinator Robert Saleh, whose hiring was announced last week. But while they opted for a new face, some of their NFL brethren didn’t seem to get the message. Jason Garrett rewrote the definition of football mediocrity in Dallas but that didn’t stop the Los Angeles Chargers from granting him an interview. Before Saleh’s hire, the Jets interviewed Marvin Lewis, owner of the most inexplicable 16-year head coaching tenure in NFL history. The Dallas Cowboys gave Mike McCarthy control of their future after the former Packers foreman reached a mere single Super Bowl with Aaron Rodgers in tow. Though the concept appears to be slowly dying off, it’s particularly frustrating to see some claim that Eric Bieniemy doesn’t “interview well” while Bill O’Brien did. Sure, sometimes a change in the narrative is possible, but for every Pete Carroll, there are multiple Hue Jacksons.

If the retread trend is going to continue, those who deserve redemption should get another shot. Former Jets boss Todd Bowles has more than earned the right. The owner of a Super Bowl ring from his endeavors with Washington, Bowles is now a win away from earning a return trip as the defensive coordinator of the Tampa Bay Buccaneers. His unit will have their work cut out for them as they face Aaron Rodgers and the Green Bay Packers in Sunday’s NFC title game (3:05 p.m. ET, Fox).

Obviously, Bowles’ next head coaching opportunity won’t come in a New York reunion, but rumors have surfaced that he will interview for the Philadelphia Eagles’ vacancy this week. Like Saleh, Bowles’ modern hiring was a risk with the Jets back in 2015 and it’s a risk today with the modern NFL’s worship of a deity known as fantasy football. But in this world where the “over” is routinely hit and goal-to-go situations can be created through merely breathing on a receiver, Bowles is doing anything he can to prove that defense still wins championships. So far, he’s succeeding.

Tampa Bay’s late surge, winners of six in a row after health protocols, has coincided with Bowles’ defense coming up with big plays. They’ve forced multiple turnovers in three of their last four games and have let up less than 300 passing yards in each of that quartet. The magnum opus was Sunday’s NFL Divisional playoff tilt in New Orleans, when the Buccaneers forced four game-changing turnovers in a 30-20 win. In a game headlined by Drew Brees and Tom Brady, Bowles made sure that the true difference-makers were Devin White and Antonie Winfield Jr.

Those four steals perhaps weren’t even the most impressive turnovers of the evening, but rather the growth that Bowles’ unit made from their last tilt with New Orleans. In a nationally televised visit to Cigar City, the Saints tallied 38 points and 420 yards in a one-sided victory. Tampa Bay let up only 294 yards and 20 points on Sunday, with two of the New Orleans scoring drives netting less than 50 yards.

â€œI think the No. 1 thing is (that) Todd Bowles said we were going to be feisty,â€ White, he of 11 tackles, an interception, and the recovery of Winfield’s forced fumble on Sunday, said in a report from Rick Stroud of the Tampa Bay Times. â€œWe were going to challenge those guys. Heâ€™s said heâ€™s going to take us over them. I know we might be young, but we can get after it when we get our mindset to it. Everybody was saying, whereâ€™s the Tampa Bay defense from the Green Bay game? We were really feisty and challenging them at the line of scrimmage and really getting after the quarterback, and we had the same mentality.â€

White’s reference to Tampa’s conference title game opponent stemmed from a stellar showing at home back in October. Tampa defenders earned five sacks of Rodgers and limited Green Bay to 201 yards in a 38-10 blowout victory.

Bowles’ success in his Tampa Bay role, having joined Bruce Arians’ staff in 2019, could well be a case of being a brilliant coordinator whose skills as a head coach fall short. We’ve seen it throughout recent history in examples like Steve Spagnuolo, Wade Phillips, and Josh McDaniels, among others. After their respective rough patches at the helm, they have each established themselves as championship coordinators, and there’s no shame in that. But for his role in shutting down some of the more potent offenses in football, a task rendered brutal by the love of offense in today’s league, Bowles deserves a chance to prove he can go beyond coordination.

If Bowles’ on-field performance isn’t an indicator of why he’s so worthy of a second chance, it’s the love his players have bestowed upon him. If a team is looking for a new head coach, it usually means there are some raw feelings flowing through the organization. A unifier like Bowles could be just the antidote to quell these feelings, if only for a short while.

Sure, Bowles’ tenure seems only sweet in the lens of a New York retrospect because the Gase era was so brutal. The Jets went 24-40 in four seasons under his supervision and even the one season of progress…his 2015 debut…is remembered best for one of the most heartwrenching memories in recent New York memory, the ugly Week 17 loss in Buffalo that cost the team a rare playoff spot. But there was no denying that Bowles was beloved by his players, who lauded him with accolades upon receiving news of his exit.

â€œI hate to see the news,â€ linebacker Avery Williamson, traded to Pittsburgh in 2020, said in the aftermath. â€œHeâ€™s a great person, great coach. I feel like he definitely helped get my game up to another level this year. He definitely taught me a whole lot of plays.â€

Compared to the de facto restrained jubilation in the wake of Gase’s departure, Bowles’ ousting a solemn occasion in New York. The firing was flipping to a new chapter that no one wanted to turn to.

“To come up short and to hear the news that Coach Bowles wasnâ€™t going to be here anymore, it (stinks),â€ quarterback Sam Darnold added. â€œI think Coach Bowles, his type of leadership, he showed me that you can just be you and people will respect that. as long as you come in and be the same person day in and day out. He showed me how to lead and that itâ€™s possible to lead that way.â€

Much as we, the football-loving public, will continue to turn to the NFL to get our professional fix, it will continue to do things and make moves that shock and perplex us. The powers that be should make sure that Todd Bowles being denied a second opportunity at head coaching, one granted to countless others, isn’t one.

The New York Jets were reportedly interested in talking with Campbell, but he’s set to stay with Iowa State.

So grateful for the commitment of so many to continue to want to build our program together. Our foundation has been built on Loyalty and Faithfulness and it will continue to be our guiding light. Humbled and Grateful to continue to lead to be different.

Matt Campbell is apparently sticking with Ames over East Rutherford and the other NFL markets.

The Iowa State head football coach strongly hinted that he’s staying with the Cyclones despite reported interest from several NFL camps, including the New York Jets’. Jason La Canfora of CBS Sports originally reported that the Jets were expected to speak with Campbell, but Bruce Feldman of The Athletic has shot the notion down. Campbell’s tweet appears to have confirmed such a departure.

“So grateful for the commitment of so many to continue to want to build our program together,” Campbell said in his tweet. “Our foundation has been built on Loyalty and Faithfulness and it will continue to be our guiding light. Humbled and Grateful to continue to lead to be different.”

Campbell’s celebration of unity stems from his ISU program welcoming back all but two starters on offense and defense from what’s likely the most prolific season in team history. The Cyclones tied a program-record with nine wins and made their first appearance in the Big 12 Championship Game. Though they fell to Oklahoma 27-21, ISU was ranked 10th in the final College Football Playoff poll and earned a postseason victory at the Fiesta Bowl, topping Pac-12 champion Oregon 34-17.

The Cyclones have qualified for a bowl game in each of the last four seasons under Campbell’s watch, setting yet another program-best. Their future fortunes received a strong turn in the right direction when All-American tight end and All-Big 12 safety Greg Eisworth each confirmed that they would likewise return to Ames, eschewing the 2021 NFL Draft.

Despite the apparent loss of Campbell, the Jets’ coaching search continued throughout the weekend. The team confirmed they held interviews with several candidates including playoff-contending coordinators like Brian Daboll, Brandon Staley, Matt Eberflus, and Arthur Smith.