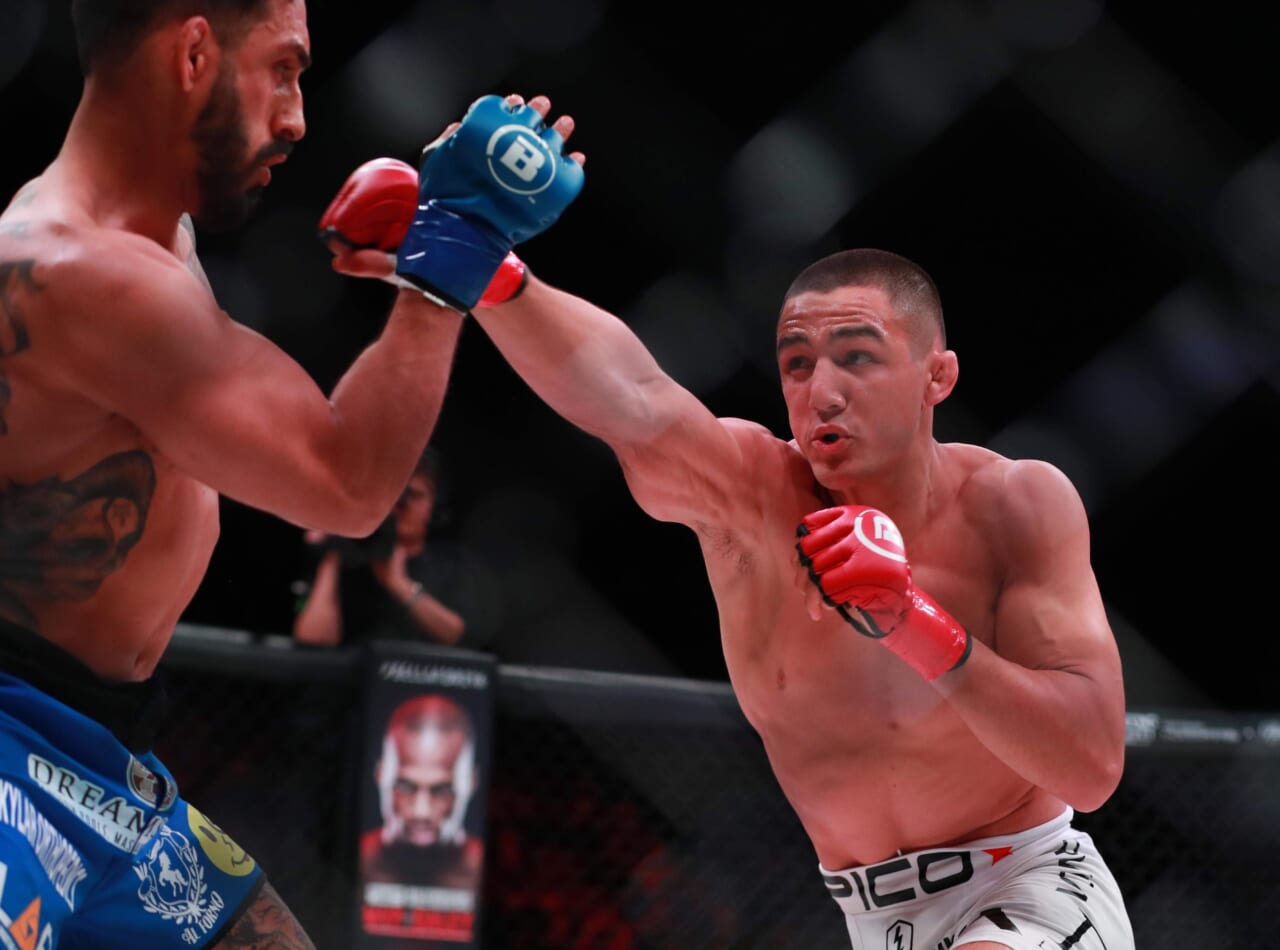 Bellator‘s Aaron Pico (7-3) might have been the most credentialed prospect to ever make his professional debut with a major organization. Pico was an Olympic caliber wrestler and he had incredible boxing talent.

With the striking and grappling credentials he had, many believed he would instantly become a star for Bellator. However, the road has been a lot more challenging than anyone would have anticipated.

Pico was dealt a harsh dose of reality when he lost his professional debut in just 24 seconds. However, he showed very good poise in his ability to bounce back after that first professional loss at Bellator 180.

Pico would go on to win four-straight fights before running into Henry Corrales (18-5) at Bellator 214. Pico hurt Corrales bad in the opening exchanges, but he was drawn into a firefight. Corrales ended up landing a monster shot that put Pico out.

Aaron Pico would then go on to lose to Adam Borics (16-1) in his next fight. After two-straight losses, Pico made the move to Jackson-Wink for his training. That is where the career has really turned around for Pico.

Pico fought three times for Bellator in 2020 and he went a perfect 3-0. However, it was the way that he won that impressed me. He fought composed and he used all of his weapons to get the job done. Greg Jackson appears to be getting the best out of Pico.

Aaron Pico recently spoke to My MMA News where he talked about his urgency to compete in 2021. He said that he wants to compete at least three or four times inside the Bellator cage this year.

When asked about potential opponents, Pico said he’s most interested in fighting the two men who’ve most recently beat him. Of course that being Borics and Corrales. In reality, those rematches do make sense for Bellator.

Pico has all of the potential to be a star for the promotion. It would be a great thing for Bellator if he was able to get those fights back and avenge those losses that he had before he made the move to Jackson-Wink.

I could see Bellator pairing Pico up against those two in 2021. One thing to keep in mind is that I don’t think 2021 will be a title year for Pico. It’s going to take a little more time and he’s been vocal about not fighting his long-time friend, AJ McKee (17-0).

McKee is in the finals of the featherweight Grand Prix and looks poised to potentially become the featherweight champion. If that was to happen, Pico already said that he wouldn’t fight McKee unless it was for life-changing money.

That being said, I don’t think 2021 needs to be a title year for Pico to do something special. In my opinion, I just want to see him continue to progress under Greg Jackson. Pico can still be a superstar for Bellator and 2021 has the potential to show that.

Last night at Bellator 252, Aaron Pico (7-3) returned to the cage to take on John De Jesus (13-9). De Jesus was expected to give Pico a tough challenge in the prospects third fight of 2020.

However, Pico showed once again just how far he’s come since making the switch to Jackson’s MMA. The top Bellator prospect completely dominated John De Jesus from the opening bell to the knockout finish.

In the first round, Pico used his dominant wrestling to control De Jesus. Pico showed incredible takedowns and he showed off his great ground control. De Jesus forced a couple of scrambles, but ultimately Pico got him right back down.

When the fighters were on the feet, Pico did a fantastic job of ripping power shots to the body and up top. What I was really impressed by was his ability to chain together his punches and transition into his takedown attempts.

Pico seemed to have De Jesus guessing all night. In the second round, De Jesus forced another scramble to get back to his feet. However, once they were there, Pico was able to land a massive overhand right that put De Jesus out.

The power of @AaronPicoUSA folded him in half ðŸ˜³

Pico’s domination just goes to show you how much he’s evolved since moving over to Greg Jackson’s gym full time. He started training part-time at Jackson’s prior to the loss to Adam Borics.

Most notably, Jackson has been a lead trainer for Georges St. Pierre and Jon Jones. Jackson is known for his brilliant gameplans and his ability to really bring out a fighter’s strengths. Pico’s Bellator career is really taking off since joining Jackson’s.

He looks like a completely different fighter. Over his last two performances inside the Bellator cage, we’ve seen just how dominant Pico’s wrestling is. His hands and power are great, but his wrestling is where he really shines.

Early in Pico’s career, we’d see him rely on one strategy. Either it was completely wrestling or completely boxing. He was drawn into firefights and found himself staring up at the Bellator lights a few times.

However, Greg Jackson has really transformed the way Pico fights. We are now seeing him tie everything together and he’s looking incredibly special. His three performances this year should put the Bellator featherweights on notice.

He’s still improving and he’s still got more to learn, but Aaron Pico is looking more and more like the special fighter we knew he could be. A lot of the credit for that should go to Greg Jackson.