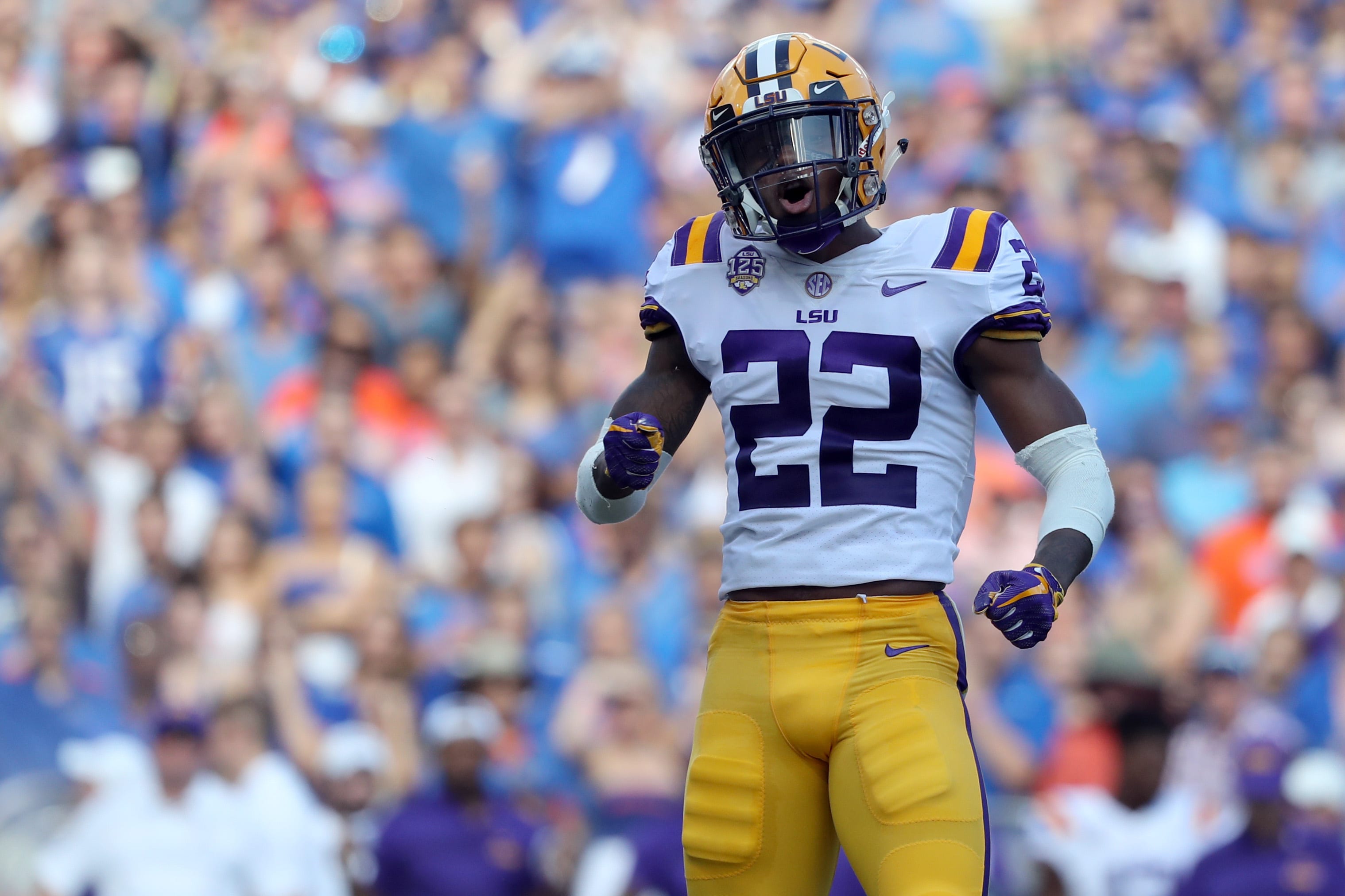 The College Football National Championship is finally here, and New York Giants fans should be paying close attention.  LSU and Clemson are set to square off, and both are loaded with NFL caliber players.  Many of which are in positions of need for Big Blue.  The Giants scouts will have their eyes on Monday nights game, and you should, too.

Who will the Giants be watching in Monday’s National Championship?

Isaiah Simmons needs no introduction.  He has been linked to the New York Giants for some time now.  Truthfully, he would be the only player Monday that would make sense with the 4th pick.  Simmons is an athletic freak that can wear many hats in the defense.  That versatility seems to be something new head coach Joe Judge will be highly intrigued by.

Simmons spent much of his season playing LB, S, and even CB for the Tigers en route to Monday nights game.  He has excellent range, elite quickness off the snap in pass rush, and the man can tackle!  Simmons has very good man coverage skills, which would be a blessing to this defense.  The Giants taking Simmons would be met with rousing appreciation from a fan base that has been wanting a game-changing linebacker for years.

A little Isaiah Simmons and how insanely athletic and fast this guy is!

He'd be a perfect fit for the Giants in the 3-4 defense — can rush the passer and cover.

Keep in mind, this is my first go at this, so improvements to come! #giantschat pic.twitter.com/6S9XUnaJRh

Another potential first-rounder for the Giants, but only if they trade back from 4 or he has a mind-blowing combine. Fulton is about everything you’d want in a man cover cornerback — he can get physical at the line of scrimmage in press coverage and can remain in an opposing receivers hip pocket.  Excellent ball skills and can be very explosive when closing down distance while playing off coverage.

Some things to watch with Fulton is he has not been the best tackler, so the run game is far from a strength of his.  It also should be noted that he does have a failed drug test in 2017 that may come up as a red flag.

Safety is not something I expect the Giants to address early in the draft, which likely means Delpit’s chances of suiting up in the blue are very slim.  However, his talents are worth watching.

The 2019 Thorpe Award winner is likely to be the highest-drafted safety in April, and that comes with good reason.  Like Simmons, he’s a versatile player that can play single high or in the box. Delpit has great size and length, can play man or zone coverage, and has incredible instincts that show up in his ability to take the ball away.

Chaisson is one of my favorite prospects in the draft.  If the Giants do what I think they should do and that’s trade back, look for Chaisson to have a legitimate chance to be a 1st round selection for New York.

K’Lavon is more of a stand-up pass rusher that brings outstanding speed to the defense, which helps him in containment.  He often looks to win with pure speed and will need to continue to develop his skillset of pass rush moves, but if you watched the Tigers game against Oklahoma, you’d see how much of a difference-maker Chaisson can be.  The athletic pass rusher was coming off of a torn ACL in 2018, but considering Chaisson chased down one of the fastest WR prospects in the draft, CeeDee Lamb, I would say it’s just fine.

What? I can’t be the only one that will be watching offensive linemen in the National Championship Game, can I?  It is no secret that the Giants have to address the offensive line in the draft. They may look for stop gaps in Free Agency, but getting younger across the line is going to be crucial.

Many will wonder what happens with Jon Halapio going forward after undergoing surgery on a ruptured Achilles in Week 17.  Has his play and injury history kept him from coming back to the organization in 2020?  If so, Cushenberry could be that answer. Cush will be one of the few interior offensive linemen that can also play center, and that versatility could be attractive to the Giants. He’s still raw and won’t be an early-round pick, but given how thin the interior OL class is, he could be a top 100 pick.

Tremayne Anchrum is another intriguing prospect.  Anchrum is an offensive tackle that many believe would be better suited for a move inside. Tremayne could prove himself a late-round tackle prospect with a good showing against the LSU pass rush.  His balance leaves a lot to be desired, and his length needs improvement to be an NFL tackle, but he has solid athleticism and vision that makes him a potential project.

Monday nights National Championship game will be loaded at the skill position on both sides of the ball.  These offenses have all the potential to light up the scoreboard, and Higgins and Jefferson are two massive reasons why.  Both receivers have tremendous height with Higgins listed at 6’4” and Jefferson only an inch shorter at 6’3”.

Tee may be a slightly more polished receiver than Jefferson, but not by much.  Higgins’ ability to burst off the line of scrimmage is pretty impressive for a bigger receiver. Despite this, he could use a little more physicality in press coverage at the line.  He is fearless with an incredible catch radius, showing off his basketball background when high pointing the football in contested coverage.

Justin Jefferson has a similar toughness while going for catches when contact is inevitable.  He is creative in his routes, finding open space in zone coverage. He also can beat the defense deep with his speed on posts and fly routes.  Jefferson has what it takes to be another great LSU receiver in the NFL, but will need to work on creating separation against man coverage and cleaning up his technique off the line.  It’s no secret that the New York Giants have found elite receiving talent from LSU… could they do it again with Jefferson?