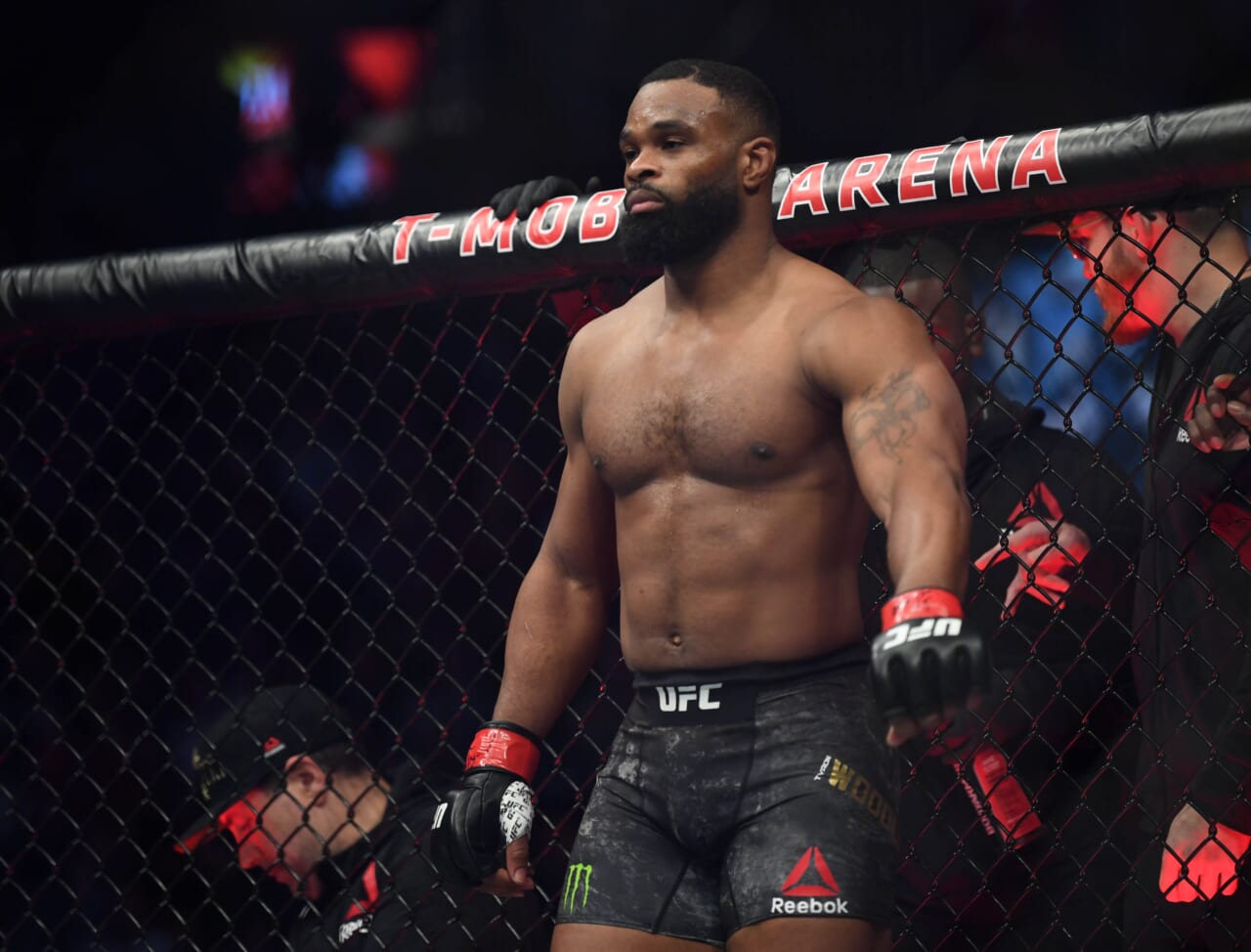 This Saturday night, the UFC makes its long-anticipated return to Las Vegas with UFC on ESPN 9, which will be headlined by a welterweight contest between former champion, Tyron Woodley, and rising contender, Gilbert Burns. The UFC took a couple of weeks off after shelling out three events in just eight days back in early May. With the restrictions being lifted back in Las Vegas, the UFC is bringing fights home to their new APEX. The card is filled with some really intriguing matchups, including a couple of former title challengers to go along with the former Welterweight champion Woodley. Let’s take a look at a few of the fights that stick out for the UFC’s return to their home base in Vegas.

This is a fight that really intrigues me for a number of reasons. Tyron Woodley (19-4-1), is making his return after he was utterly dominated by Kamaru Usman back at UFC 235. Woodley was coming into that fight as a three-time defender of his Welterweight title, but he looked like a shell of the guy who was the champion for almost three years. There was no explosion, and Woodley just appeared to be lost. Maybe that’s just what Kamaru Usman does to guys, or maybe Woodley just wasn’t feeling it. Either way, the performance was lackluster, to say the least. Woodley now finds himself at a bit of a career crossroads. He’s 38 years old, but he just lost the title, and now he’s facing a very hungry contender. A win would likely earn Woodley another crack at the title he lost, but a loss might signal the end for Tyron Woodley. For that reason, it’s also a critical fight for the former champion.

Standing across from Woodley will the rising Gilbert Burns (18-3), who is coming off of the best win of his career, a knockout of former title contender Demian Maia. Burns had won four fights in a row leading to that Maia fight. Maia was a big step up in competition, and many were wondering how Burns would do. Well, Burns survived having his back taken early and turned right around to knockout Maia in the first round. Burns has elite skills on the ground, and he’s very dangerous on his feet. He’s very quick with a good amount of pop in his legs and his hands. He presents an exciting challenge for the former champ. Both guys are powerful, and both guys have excellent quick trigger speed.

When looking at this fight, it all comes down to which Tyron Woodley shows up. If the rapper/TV personality Tyron Woodley shows up, I think Burns can win this fight on points just being a more active striker than Woodley. However, if the former champion shows up with some urgency, I think this is a very winnable fight for Tyron Woodley. Gilbert Burns was put away by Dan Hooker so you know he’s capable of being knocked out, and there’s a massive difference between the power of Dan Hooker and the power of Tyron Woodley. I think Woodley is going to come out with a little bit of a chip on his shoulders wanting to climb the latter one more time before he fully transitions out of fighting. I think we are going to see some fireworks early, and I don’t see the fight lasting two rounds.

Prediction: Tyron Woodley by TKO – Round 2

The co-main event of this card presents an interesting fight between two heavyweight contenders inside the top 15. Augosto Sakai (14-1-1) comes into this fight on a five-fight win streak, which features four wins by KO/TKO. Sakai’s only loss in his career came at the hands of former top UFC contender Cheick Kongo by split decision. Sakai is a very intriguing prospect who goes right after whoever he’s fighting.

The most notable win in Sakai’s UFC career was his split decision victory over former champion Andrei Arlovski back at UFC Fight Night 150. Standing across from Sakai will be a guy who can take ungodly amounts of punishment and just keep coming. Blagoy Ivanov (18-3), is almost like a gatekeeper in the UFC’s heavyweight division. He’s fought some of the better guys in the division from former champ Junior Dos Santos to former title challenger, Derrick Lewis. Those two are two of the biggest hitters in the division, and Ivanov just ate everything they had and kept moving forward.

Prior to his decision loss to Derrick Lewis at UFC 244, Ivanov was coming off back to back impressive wins over Ben Rothwell and Tai Tuivasa. Ivanov has an impressive background in Sambo, but you rarely see him use any form of it in MMA. This is a fight that you will likely see contested on the feet. I don’t think either guy is going to be able to put the other away, so this is a fight that is going to go the distance. I think I’m going to give the overall striking advantage to Sakai, but a lot will come down to if he can keep up with Ivanov’s suffocating pace. In the end, I think Sakai will do enough to secure the points to win this one, which should get him a top ten opponent in his next outing.

The featured prelim of the night on ESPN+ will show former title challenger, Katlyn Chookagian (13-3), facing off against the older sister of UFC Flyweight champion, Valentina Shevchenko. Antonina Shevchenko (8-1) is making her fourth appearance in the UFC, and she’s getting a big step up in competition getting the third-ranked flyweight in the world. Chookagian was coming off back to back wins leading into her title shot against Valentina back in February at UFC 247.

Chookagian has a really good point style striking game where she can get in and out of exchanges without taking a lot of damage. Chookagian is not the type of striker who is going to threaten to put your lights out, but her consistent output frustrates and annoys anyone who steps across from her in the cage. Her style might not be the most exciting, but it is effective, which is how she got the title shot. Antonina Shevchenko was able to bounce back against Luci Pudilova at UFC on ESPN 5 after suffering her first career loss against Roxanne Modafferi back in April of 2019.

The elder Shevchenko possesses good submissions skills and an elite striking game being a former world champion in Muay Thai. This is a step up in terms of rankings, but it is a very good fight for Shevchenko, considering it’s likely to stay on the feet. Shevchenko is likely the betting favorite with her past experience in Muay Thai and the fact that her sister and lead training partner just dismantled Chookagian a few months ago. I think Chookagian is going to land her shots in this fight, but I see Antonina Shevchenko landing the more significant shots as this fight goes on. Another decision is going to be coming here, and it’s going to come down to what the judges are looking for. Do not be shocked to see Chookagian land more overall strikes, but expect Shevchenko to land the more significant shots.

Rest of the Card

Overall this is a pretty solid card for the UFC’s return to Las Vegas. There are many more intriguing fighters on the card, including Brok Weaver, Mackenzie Dern, Tim Elliot, and more. The UFC will waste no time after this weekend’s fight night turning right around for UFC 250 on June 6th, which is also expected to be contested at the UFC Apex. That event will feature the return of the GOAT, Amanda Nunes, as she takes on Canadian challenger, Felicia Spencer, for the Women’s Featherweight Title. We will have a full breakdown of that card next week, but for now, keep looking forward to UFC on ESPN 9 this weekend.