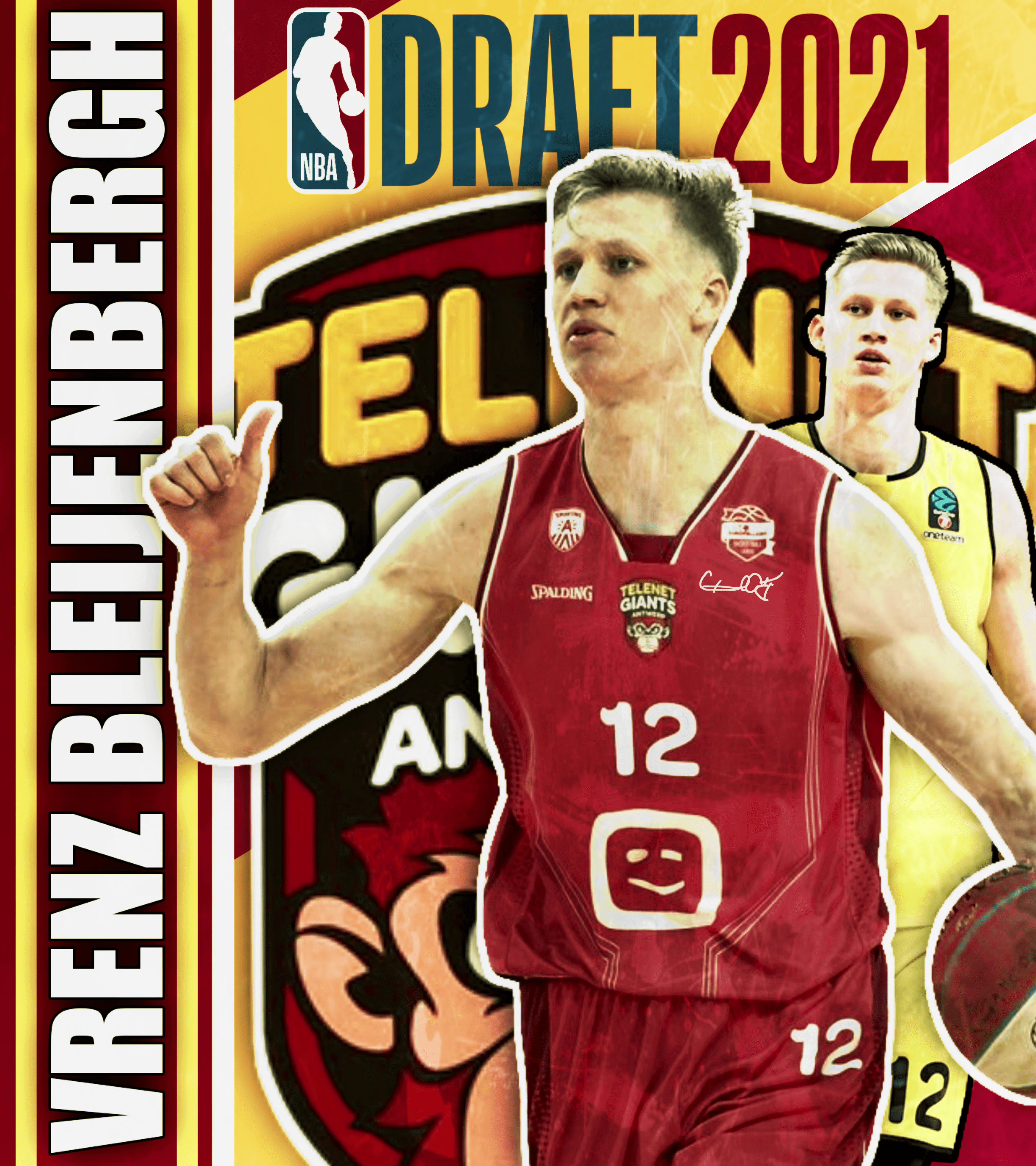 Belgian prospect Vrenz Bleijenbergh grew up as a Knicks fan. Will the Knicks make his NBA dream come true?

But Belgium’s best-kept secret, Vrenz Bleijenbergh, aims to become the first one. The unicorn has been flying under the radar in a country best known for its chocolates, waffles, and beer, and soccer as its no. 1 sport.

“Basketball is not really big in Belgium. The league there is also not big. Thatâ€™s a bit of a negative factor in my career,” Bleijenbergh told Empire Sports Media after his workout in Sacramento last Monday. “If I had played in Spain, Italy, or France, it would have been way easier for me to be on the radar. But I just take it as it is and Iâ€™m just proving myself right now and itâ€™s paying off.”

Bleijenbergh missed the NBA Draft Combine in Chicago after his papers were not processed on time. But ever since he arrived in the United States on the fourth of July, he’s been making up for the lost time.

The dizzying schedule has kept his body sore. But he’s embracing the pain.

As the cliche goes, “No pain, no glory.”

“I got like 13 workouts in 20 days. Itâ€™s really tough for me. I had a 20-hour flight from Belgium and have been traveling to different cities since then. Itâ€™s been tough, but if you have a goal, and itâ€™s your dream, you got to go through all the pain and gotta show up,” Bleijenbergh said.

His workout with the Knicks over the weekend included first-round prospects Joshua Primo of Alabama and Jaden Springer of Tennessee. There were six of them who worked out with Knicks coach Tom Thibodeau walking around the facility as his skills coaches put them on different kinds of drills.

The Belgian prospect has an affinity to the Knicks because he grew up watching them.

“When I was a young kid, Iâ€™m really a New York Knicks fan because of Carmelo Anthony. I really liked the Garden. My best friend is also a die-hard Knicks fan,” Bleijenbergh said. “I watched them last year. They had like a bad year before and this year seemed better. And I hope for them to keep going and do better.”

He hopes he made quite an impression to become part of that special group under Thibodeau. He had a great interview with the team, including a talk with GM Scott Perry.

Bleijenbergh grew up in a small town called Brasschaat, known as a park town in Belgium. There are no skyscrapers. But it has its own version of the SoHo district with a long high street lined with various shops, cafes, and bars.

“New York is a great city. It’s one of the biggest cities in the US. Thereâ€™s a big difference compared to Belgium. But I really like the people around here,” Bleijenbergh said. “So, New York has really been great as a franchise but I would love to go to the team that really believes in me, that will really work with me to reach my potential.”

His potential has always been there since he held a ball 16 years ago.

“I started playing basketball when I was four years old with the same club Iâ€™m still in it. Iâ€™ve been with the same club for 16 years now. I grew up from the youth [team] to the second team and to the first team and Iâ€™m kinda trying to make the next step,” he said.

BleijenberghÂ led Belgium to a bronze medal finish in the 2018 FIBA U18 European Championship Division B in Macedonia. He was named to the All-Tournament Team after averaging 13.5 points, eight rebounds, a tournament-high six assists, and two blocks per game.

At the age of 16, he left high school and focused on his NBA dream. He turned pro, declining offers from big NCAA programs such as UCLA, Arizona, Texas Tech, and Kentucky, among others.

“In Belgium, itâ€™s difficult to combine school and basketball. I didnâ€™t finish high school yet so I canâ€™t go to college. So, I decided to go pro at 16 years old,” Bleijenbergh said.

He felt that playing against grown men will fast-track his development.

“I always wanted to be an NBA player. But I really think I became closer [to my dream] when I started playing for the U16, U18 team for Belgium. Thatâ€™s when it hit me that I really wanted to be a professional player,” he explained.

“When I became a professional player, I really wanted to go to the NBA because itâ€™s just like a dream for everyone. But when I became stronger, I grew taller, and I was like 18, I was really thinking about the possibility of playing against great basketball players. I really felt I could make it because of the talent I got and the hard work I put in. So, when I turned 18, I really decided to go all-in for it,” he added.

He played point guard even though he was tall enough to play the wing or even the center position. His court vision and passing skills have held him back from being pigeonholed as a big man, making him such an intriguing prospect at a time when basketball has become positionless.

His rare combination of size and unique skill set has drawn him to another European unicorn Luka Doncic from Slovenia. The Dallas Mavericks’ rising superstar is the one guy he’s been looking up to as no player in Belgium made it to the NBA. Former NBA journeyman DJ Mbenga technically was the first Belgian to play in the NBA, but he’s a Congolese who holds a dual citizenship with Belgium.

Bleijenbergh has been diving into Doncic’s films a lot after practice.

“I really like his game, how he plays and how he sees the floor. I really look up to him,” he said. “What I liked most about Lukaâ€™s game is the way he plays the pick and roll game, how he finds open teammates, how heâ€™s creating space for himself, how heâ€™s shooting the ball out of pick and rolls, finding the roll man. Thatâ€™s how I like to play, too.”

Scouts have raved about Bleijenbergh’s playmaking and ballhandling. He runs the floor in a fluid motion for his size.

It also helps that he’s played against NBA-caliber talent, getting necessary experience against the likes of Milos Teodosic, Marco Belinelli, and one-time Knick Mindaugas Kuzminkas, among others.

His numbers consistently jumped throughout his first three years as a pro. Antwerp Giants eased him into the rotation, starting with 7.5 minutes per game until it peaked at 26.1 minutes last season. He averaged 9.5 points, 4.8 rebounds, 3.5 assists, 1.3 steals, and 0.6 blocks per game with a 38/34/68 shooting split in his final season in Belgiumâ€™s pro league.

His shooting percentages aren’t that solid, but his shooting motion has been fluid. Despite his length, he’s only averaged two free throws a game, as he mostly operated from the perimeter.

It’s something that he’s working on as he prepares to jump to the NBA.

“Getting stronger â€“ I think thatâ€™s the biggest thing I need to improve on. My talent is there but I think if I get just a little bit stronger, the more I can create space for my teammates. It will be easier for me to finish strong closer to the basket,” he said.

Coming from Europe, where the game is played differently, Bleijenbergh is confident that he can easily adapt to the NBA.

“[The game here is] more of an isolation game. Iâ€™m a team player. In Europe, we do a lot of sets, a lot of team plays. Hereâ€™s a little bit different â€“ more on isolation game and talent. Itâ€™s also good for me because Iâ€™m very versatile and can play many different positions. I like to be here, and Iâ€™m really enjoying it,” he said.

“I can play with the ball in my hands, play off the ball. I can catch and shoot. I can go into a defensive role. I can spot up. I can find open teammates. Iâ€™m pretty long, athletic, and pretty quick so I can also go on the open floor, grab rebounds and run it to keep the tempo up. So thatâ€™s the kind of player I am.”

Bleijenbergh had been encouraged by the feedback he’s been receiving from the teams he visited so far. His confidence is growing after every workout.

“I think I have the chance to get picked in the first round. Iâ€™m just a little bit under the radar,” Bleijenbergh said. “Iâ€™ve been grouped with a lot of lottery picks and maybe I was even better in the workouts. But weâ€™ll see. Itâ€™s difficult for guys from Belgium, whoâ€™s not predicted to be in the first round. But I think Iâ€™m a first-round talent. Iâ€™m really positive about it.”

European prospects have become a hit-or-miss target recently, except for Doncic, who is a generational talent. Bleijenbergh doesn’t come from a European nation with a reputation for producing NBA players. But there are signs that he’s the chosen one in his country to become a trailblazer.

“Itâ€™s not a lot of pressure because nobody has reached it yet,â€Bleijenbergh said. â€œSo, Iâ€™m trying to be the first one, and itâ€™s going to be a big achievement for me because Iâ€™m really working hard on it. I really want to make it. And itâ€™s also good to put Belgium on the map. I always love to play for my country.â€