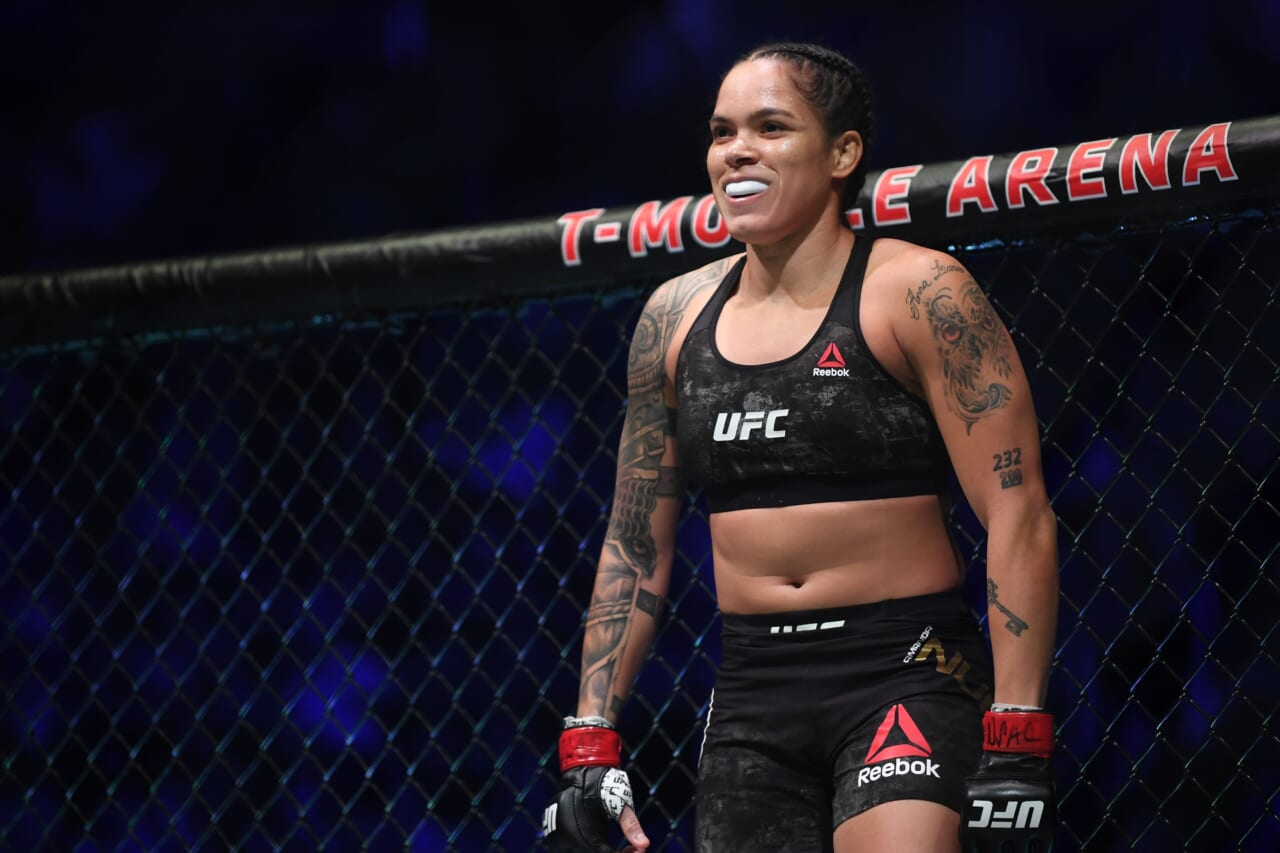 UFC 250 marked the PPV return to the fight capital of the world and the main event featured a featherweight title fight between champion Amanda Nunes (20-4), and challenger, Felicia Spencer (8-2). The UFC has come back with a bang with these events, and tonight was arguably the best night of fights yet.

The greatest female fighter of all time, Amanda Nunes, made her return to the featherweight division for the first time since she took the title from Cris Cyborg back at UFC 232. Nunes was a massive favorite over challenger, Felicia Spencer. A Las Vegas better even placed a $1 million bet on Nunes prior to the fight. Early on, it became very evident as to why Nunes was such a massive favorite in this fight. Nunes hit Spencer with some bombs early on in the first round. To Spencer’s credit, she did take the shots well. Spencer tried to engage in grappling the champion, but Nunes immediately tossed her to the floor. Nunes spent the rest of the round dominating Spencer on the ground, punishing the challenger with vicious elbows which cut the challenger.

In round two, Spencer tried to rush the champion, but she continued to eat big shots coming in. Spencer continued to try to engage Nunes in the grappling in round two, but again, Nunes was able to take Spencer down. The fight ended back up on the feet, and Nunes continued to use Spencer for target practice. Round three didn’t see much of a change in the fight. Nunes just stayed on the outside picking Spencer apart. Nunes really hurt Spencer in the third round with some serious leg kicks. Spencer was having difficulties putting weight on her leg at the end of the round. Nunes was just having her way with the challenger.

Entering the championship rounds, Spencer tried to press forward knowing that she was down three rounds. However, Nunes just kept picking apart the challenger. Nunes kept a smile on her face as she stayed on the outside hurting Spencer. Nunes was using every striking technique she had in her repertoire, and every single one was landing. Despite getting dismantled, Spencer kept pushing forward trying to mount some offense, but there was nothing there. Nunes rocked Spencer bad at the end of the round. Nunes locked in a rear naked choke, but the round ended before Spencer went to sleep.

In the fifth round, Nunes landed a couple of clean shots then she took the fight to the ground. Spencer tried to throw up some submissions from guard, but nothing ever appeared to be close. Nunes seemed content to coast through the fifth round. Inside the guard, Nunes cut Spencer again with some sharp elbows. With about a minute left in the fight the two ended back up on the feet. Nunes landed a few more good shots and landed a massive takedown towards the end of the round. The final bell mercifully sounded in one of the most lopsided title fights in UFC history.Â  Nunes took the fight by unanimous decision (50-44, 50-44, 50-45).

The co-main event of the event featured the return of former bantamweight champion, Cody Garbrandt (12-3), and top contender, Raphael Assuncao (27-8). Both of the fighters went into this fight on two-fight losing streaks. The former champion, Garbrandt, had a ton of pressure on his shoulders after being knocked out in his previous three fights. Garbrandt opened up the fight with some solid leg kicks while keeping the distance on Assuncao. The entire first round, Garbrandt stayed very patient on the outside picking his shots on Assuncao. Assuncao really never got the distance right in round one. Assuncao was chasing Garbrandt all round and he was eating shots from the outside including some very nice leg kicks.

Garbrandt opened round two with a blitz where landed a clean head kick on Assuncao. Garbrandt’s speed and diverse striking attack was giving Assuncao fits. About two minutes into the second, Assuncao landed a couple of decent right hands, but Garbrandt didn’t react. In the past, Garbrandt would bite down on his mouthpiece and throw caution to the wind. Garbrandt stayed patient in round two trying to strike from the outside. Garbrandt quickly floored Assuncao with a big right hook that landed behind the ear. Assuncao bounced back up and landed some decent shots. Assuncao seemed to be gaining his range towards the end of the round, but right before the round ended, Garbrandt landed a massive right hook that put Assuncao to sleep. “No Love” made a massive statement with this fight, and proved to everyone that he is still one of the best bantamweights in the world.

The fight that I was personally looking forward to the most heading into the evening was the bantamweight title eliminator fight between Aljamain Sterling (19-3) and Cory Sandhagen (12-2). Petr Yan and Jose Aldo will be fighting for the vacant title this summer, but Dana White said the winner of this matchup would fight the winner of that fight. The betting odds were dead even leading up to this fight with both men sharing very similar skill sets. Sterling came storming out of the gate putting a ton of pressure on Sandhagen early. Sterling was able to get Sandhagen down, and take his back within the first minute of the first round. From there, the fight did not last long. Sterling was able to lock in a rear naked choke and put Sandhagen to sleep. “Funk Master” left no doubt to who the number one contender is in the UFC’s bantamweight division with that performance.

The second fight of the PPV featured a welterweight contest between Neil Magny (22-7) and Anthony Rocco Martin (17-5). There was a lot of pressure on Rocco Martin entering this fight with him saying earlier in the week that this fight was the last fight on his current UFC deal. Rocco Martin did come out with a sense of urgency really trying to push the pace early against the Haitian Sensation. The first round featured a lot of clinch work that was initiated by Rocco Martin. Whenever the fighters were at distance, Magny seemed to have the striking advantage, landing some solid straight punches and kicks.

In the second round, Rocco Martin was able to land a solid right hand which seemed to hurt Magny. A big takedown in the middle of the round for Rocco Martin was probably the most significant part of the round. In the third round, Magny came out with a ton of urgency. Rocco Martin seemed to be tired, and Magny put the pressure on him. Magny did a really good job of not letting Rocco Martin breathe in the third round. Rocco Martin was breathing very heavy in the third, and Magny landed some clean shots throughout the round. Magny looked like he could go another five rounds after the final bell sounded, and Rocco Martin looked exhausted. In the end, the judges gave the unanimous decision victory to Neil Magny (30-27, 30-27, 29-28). After nearly a two-year layoff, Magny has come out strong in 2020 with back to back victories.

Suga Show Rolls On With a Walkoff

The PPV main card kicked off with a great matchup between Suga Sean O’Malley (12-0) and Eddie Wineland (24-14-1). I said in our preview that I thought this would be the perfect showcase fight for O’Malley and it proved to be that. Wineland is a big name and is the kind of guy who would go right after O’Malley on the feet. Early on in the fight, O’Malley did a really good job at controlling the distance with his kicks. Wineland kept trying to press forward, but he really could never get close enough to do any damage. O’Malley used his feints extremely well in this fight and put Wineland to sleep with a massive right straight in the first round. O’Malley was already on the fast track to stardom before this fight, but his stock jumped massively with this performance.

There were some definite bright spots in the prelims tonight. One of the early standouts was Herbert Burns (11-2), who kicked off the evening with a quick submission over veteran, Evan Dunham. Alex Perez (24-5) was also incredibly impressive in his performance against Jussier Formiga. Perez was able to get a stoppage via leg kicks which marks the second straight week we’ve seen a leg kick TKO in the octagon. Perez is now 6-1 in his seven UFC fights. Perez is likely next in line for the flyweight title. Devin Clark (12-4) was able to halt all momentum for previously unbeaten, Alonzo Menifield by getting the unanimous decision victory.

One of the fights that Dana White was telling everyone about before tonight was the fight between Maki Pitolo (13-5) and Charles Byrd (10-7). Both men went back and forth early on, but Pitolo was able to get the stoppage in the second round. Byrd has now been finished in three consecutive fights. The next fight featured a featherweight contest between Brian Kelleher (21-11) and Cody Stamann (19-2-1). Stamann was coming into this fight with an extremely heavy heart after he lost his younger brother this week. Stamann turned in an incredible performance and was able to take the unanimous decision victory. The next prelim saw a middleweight contest between Ian Heinisch (14-3) and Gerald Meerschaert (31-13). This was a fight that almost didn’t happen with a corner member of Heinisch testing positive for COVID-19 earlier this week. However, later testing determined it was a false positive so the fight went on. Heinisch went on to make a big statement stopping Meerschaert in the first round.

The featured prelim of the evening featured a featherweight contest between the youngest fighter on the roster, Chase Hooper (9-1-1), and Alex Caceres (16-12-1). Hooper entered this fight with a ton of momentum and a lot of eyes on him. Hooper had the most viewed fight in the history of Dana White’s Tuesday Night Contender Series. Caceres was a big step up in competition for Hooper and it showed. Caceres hurt Hooper early and often on the feet. There was a massive difference in the two men’s striking ability. Caceres spent the entire first fight busting “The Teenage Dream” up on the feet. Hooper threatened a couple of times in grappling exchanges, but this fight was controlled by Bruce Leeroy. Caceres went on to take the unanimous decision victory.

Amanda Nunes has no real challenges ahead of her at this point in either one of her divisions. To me, there is only one fight to make with Nunes, and that is a trilogy fight with flyweight champion, Valentina Shevchenko. Shevchenko, who arguably won the last fight with Nunes, is facing a similar situation at flyweight. These two need to fight for a third time. Nunes’ dominance is something to behold. Felicia Spencer was absolutely game tonight, but she had nothing for the champion tonight.

Aljamain Sterling made a massive statement with his first round victory tonight. I’ve thought all along that Sterling deserved to fight for the title over Jose Aldo/Petr Yan, and he reinforced those thoughts tonight. “Funk Master” will now wait his turn, but there is no denying him of his shot now.

Sean O’Malley and Cody Garbrandt’s knockouts were something to behold tonight. While it was great to see Garbrandt back in the win column, to me, the night belonged to the Suga Show. O’Malley is a budding star, and he made a massive statement tonight. Look for O’Malley to jump into the top 10 in the UFC’s rankings after this performance. Do not be shocked to see the UFC take the Conor McGregor route with O’Malley. I fully expect the Suga Show to get a headlining fight in his next appearance.