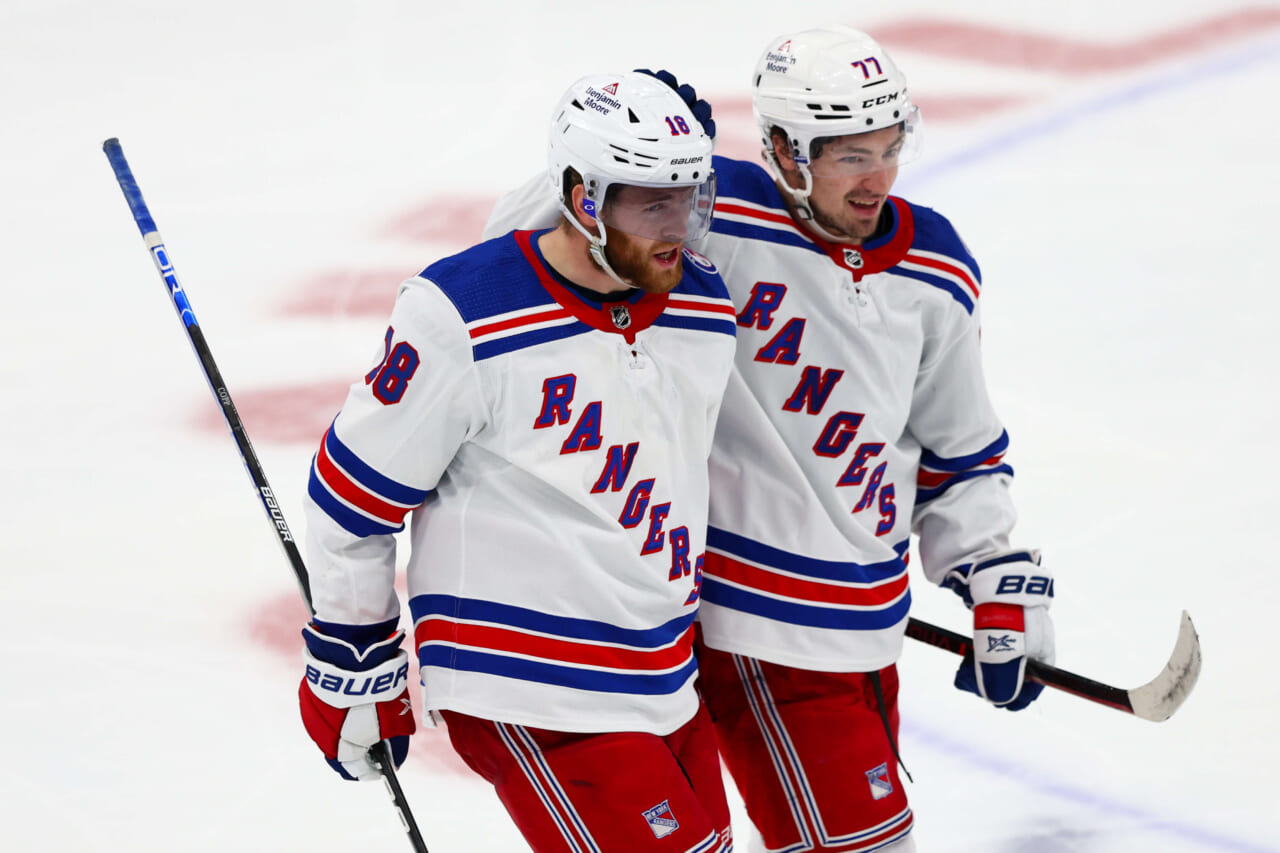 The New York Rangers need to make decisions on a few impending unrestricted free agents. The Rangers just wrapped up a surprising season that saw them make it all the way to the Eastern Conference Finals. Many of the key components of this playoff team, though, were playing on expiring contracts. Right-wing Frank Vatrano is one of those players that is set to become an unrestricted free agent. But Frank Vatrano is a player that the Rangers need to re-sign this offseason.

The Rangers acquired Frank Vatrano at the 2022 trade deadline. New York struck a deal with the Florida Panthers to put Vatrano in a blue shirt and the 28-year-old went on to have a productive season with the Rangers. He totaled 13 points (8 goals) in 22 regular-season games with New York and also added 13 points (5 goals) in 20 postseason contests.

Vatrano was playing on a three-year contract that he signed with the Florida Panthers worth $2.53M AAV. That deal expires in July and Vatrano is hoping to sign a new deal with the New York Rangers.

“I think I have some unfinished business here. I want to help this team win a Stanley Cup.” – Frank Vatrano on his desire to stay with the Rangers via Mollie Walker

In order for Frank Vatrano to complete that “unfinished business”, he will need to strike a new deal with the Rangers. This could be difficult to achieve, though, as the Rangers are tight on cap space. They have only about $12 million to spend and a slew of unrestricted free agents that are looking for new deals.

Frank Vatrano’s new deal could be worth about $3M-3.5M AAV, which might price him out of the Rangers’ range. There could be room to fit Vatrano under the cap depending on what Andrew Copp or Ryan Strome’s next contract looks like, as well as Kaapo Kakko. But a player of Frank Vatrano’s talents is worth the projected cap hit.

Frank Vatrano played on the same line as Chris Kreider and Mika Zibanejad. The trio had some excellent chemistry and gave the Rangers a spark that propelled the team deep into the playoffs. If Chris Drury wants to keep his team in Stanly Cup contention, re-signing Vatrano would go a long way toward accomplishing that mission. 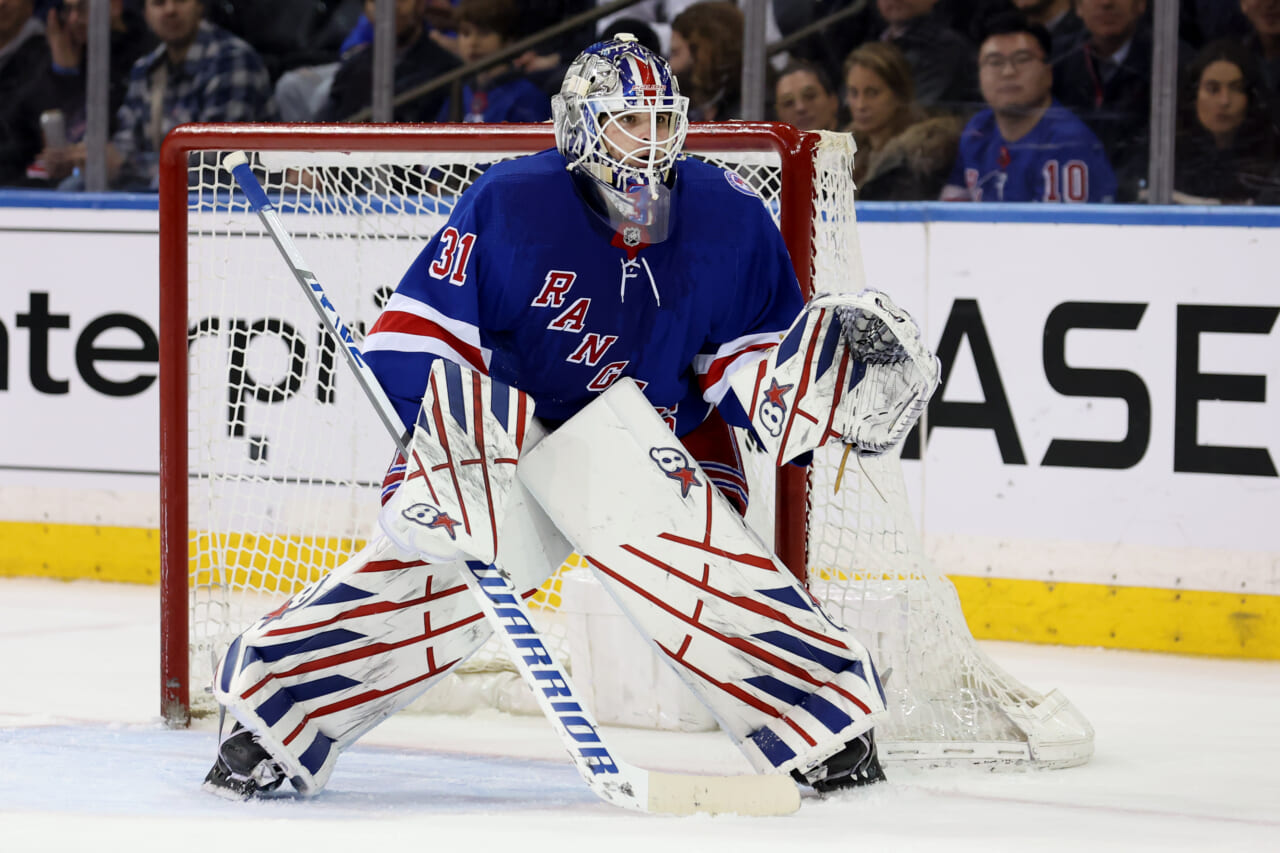 With a solid 3-0 win on Thursday night over the Pittsburgh Penguins, the New York Rangers are just two points away from clinching a spot in the Stanley Cup Playoffs.

Igor Shesterkin waved goodbye to the Pittsburgh Penguins following a convincing 3-0 New York Rangers shutout win over their division rivals.  The win gave the Blueshirts a six-point lead for second place in the Metropolitan Division with 10 games remaining.

The game had a playoff vibe from the opening face-off at the Garden.  Shesterkin was strong early in the game even though he didn’t face many shots with the Penguins playing without their captain Sidney Crosby who was a last-minute scratch with a non-covid illness.

This contest was chippy throughout the game but became a post-whistle scrum after a high hit by the Pen’s Anthony Angello on Tyler Motte. It appeared Motte, (who has concussion issues) suffered an upper-body injury and did not return for the remainder of the third period.  Gerard Gallant had no further details to announce during his post-game presser.

Newly acquired Frank Vatrano has enjoyed the Rangers-Penguins rivalry in the short time he has been in New York.

“For the most part, I think it was hard through the whistles,” said  Vatrano.  “Then it got a little chippy there toward the end. But I think the three times I played against them since I’ve been here, it’s been a playoff type of game and those are the games you’re going to play down the stretch. Especially against a team that you might see in the first round.”

Vatrano gave the Rangers a 1-0 lead 24 seconds into the second period. Artemi panarin scored his 20th of the season at 9:47 of the second and Igor Shesterkin did the rest as he made 30 saves while recording his fourth shutout of the season.

The Rangers head coach said he was never worried about his number one goaltender despite his struggles,

“I thought he was excellent. People were worried about him. I wasn’t. He played really well tonight, made some real key saves at key times.”

With their 5-3 win over the Buffalo Sabres, the Carolina Hurricanes continue to have a two-point lead over the Blueshirts with the teams jockeying for first place. The Hurricanes have one game in hand.

–       Chris Kreider notched his 21st assist of the season and has points in back-to-back games (1G-2A). In his last 10 games, Kreider has seven goals and six assists for 13 points and a plus-6 rating.

–       Igor Shesterkin stopped all 30 shots faced and posted his fourth shutout of the year. Shesterkin’s 33 wins rank tied for third in the league while his .935 save percentage ranks first in the NHL.

–       Jacob Trouba collected his 25th assist of the year, tying his second-most of his career. Trouba has points in two of his past three games (2A).

–       Dryden Hunt scored his fifth goal of the season, a career-high.

The Rangers will host the Ottawa Senators on Saturday night at 7:00 p.m. 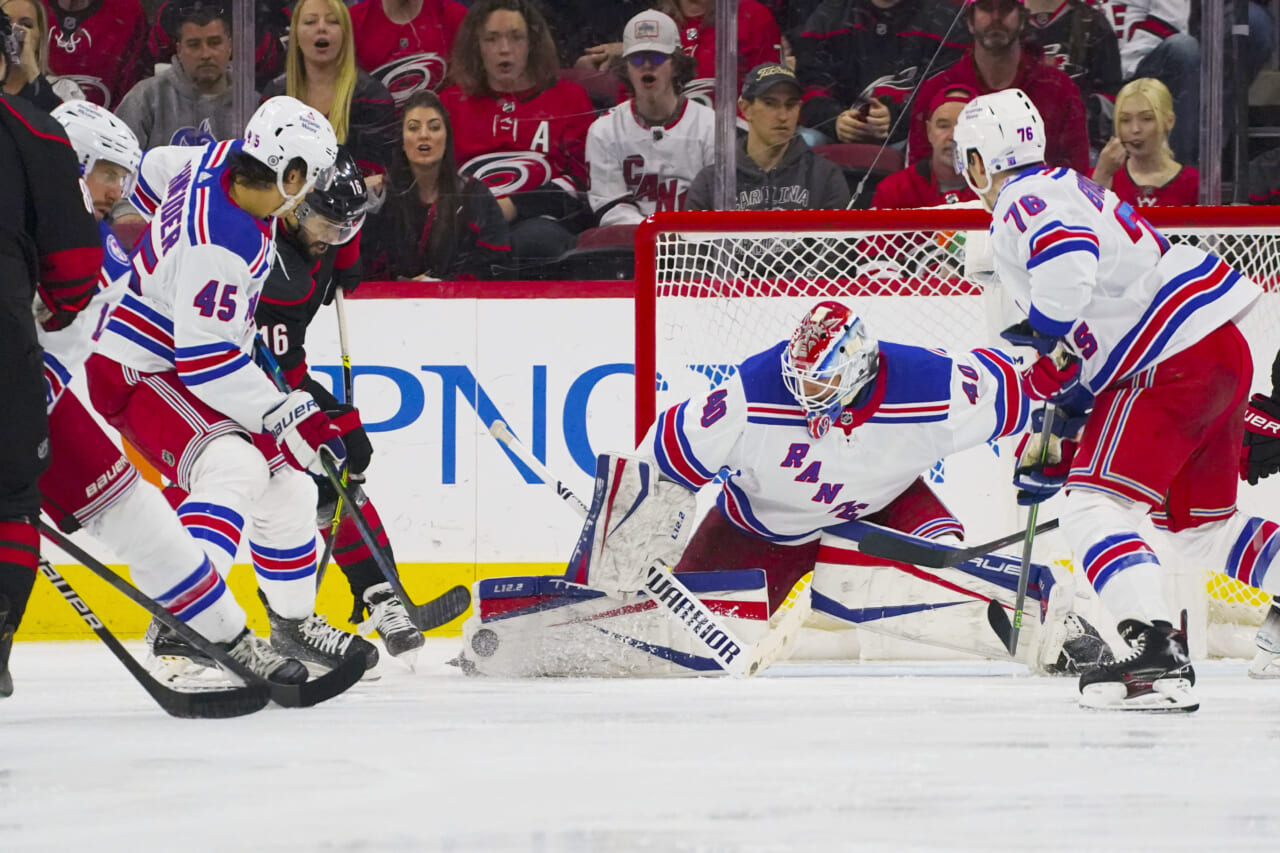 The New York Rangers beat Carolina Hurricanes 2-0 on Sunday night thanks to one of the best games Alexandar Georgiev has played for the Blueshirts making 44 saves and recording his first shut out of the year.

There are always games where a team leans on their goaltender to get a win. Then there are games like Sunday night where the New York Rangers were so outplayed and outshot that they had no business being on the same ice as the Carolina Hurricanes

Alexandar Georgiev is the only reason the Blueshirts took two points from the Hurricanes as he recorded his seventh career shut out getting a 2-0 victory.

Head coach Gerrard Gallant acknowledge that the team was lucky to leave the state of Carolina with the win thanks to the play of their backup goaltender.

“We’re lucky today,” New York coach Gerard Gallant said. “I’d like to say we came in here and played a great game, but last night was a great game. Tonight was a great goaltender who was unbelievable. We were a tired hockey team. They were all over us. They dominated, but we found a way to get two points.”

The victory was Georgiev’s second consecutive win and ninth on the season. His 44 saves were a season-high and tied for the third-most in his career. Georgiev was obviously pleased with his game following the win.

“It felt pretty great. It’s been a long time since I had a game like that, where it’s not a lot of goals and a tight game until the end. I tried to enjoy that and be in the moment.”

Chris Kreider gave the Rangers a 1-0 lead notching his 41st goal of the season. It was his third goal in his last four games as he is now tied for second place in goals scored behind Toronto’s Austin Mathews. Kreider has goals in six of his last 10 games and has 41 goals and 21 power-play goals this season. He is the fourth player in Rangers history (Jaromir Jagr – 2005-06, Mike Gartner – 1990-91, Vic Hadfield – 1971-72) to have at least both those totals in a season. Since 2007-08, Kreider is the third player to have at least 41 goals and 21 power-play goals in a season, joining Alex Ovechkin (3x) and Steven Stamkos.

Newly acquired Frank Vatrano scored an empty-net goal to seal the win. That was his first goal as a Ranger, becoming the 23rd different goal scorer for New York this season. Vatrano has 11 goals this season and three in his last four games. Vatrano notched his 20th point of the season, his fourth-straight season reaching the mark.

Vatrano has enjoyed his brief time with the Rangers and understands what a strong locker room can bring to a hockey team.

“That room is a bunch of will and knowing what it takes to win,” Vatrano said. “I’ve paid close attention to them and played against them a bunch. They’re a hard team to play against. They have a great mix of everyone in this lineup. I’m happy to be here and be a part of it and help this team win.”

The Rangers and the rest of the NHL now will sit back and wait to see what, if any, trades will be made with the NHL  trade deadline expiring at 3 p.m. eastern time on Monday.

Jacob Trouba recorded his 250th career NHL point, becoming the third defenseman from the 2012 NHL Draft and 11th Michigan-born defenseman in NHL history to reach the milestone. Trouba has points in three-straight games (1G-2A) and in four of his last five games (1G-3A). Trouba notched five hits and two blocked shots. He is the only player in the NHL with at least 170 hits and 140 blocked shots this season.

–        Frank Vatrano scored his first goal as a Ranger, becoming the 23rd different goal scorer for New York this season. Vatrano has 11 goals this season and three in his last four games. Vatrano notched his 20th point of the season, his fourth-straight season reaching the mark.

The Rangers will host the New Jersey Devils on Tuesday night.