It took one week into the 2020-21 season, but the Islanders have finally been hit with their first COVID-19 situation.

Josh Bailey, who was missing from practice yesterday for which the team didn’t give an explanation, was placed on the NHL’s COVID protocol list last night. Bailey being on the updated ledger was first reported by ESPN’s Greg Wyshynski and later confirmed by The Athletic’s Arthur Staple.

Now it’s has not been said that Bailey did indeed test positive for COVID-19; there might be light shed on the situation after the Islanders skate this morning. But it’s easy to assume he that he has has the virus or came in contact with someone who’s had it.

With that said — and the hope is it’s the total opposite of what many suspect — Bailey’s possible absence could open up the door for a few of the Isles forwards to get a chance to play.

Starting with Kieffer Bellows, he was already in Bailey’s second-line spot yesterday with Brock Nelson and Anthony Beauvillier. So it’s safe to say if Bailey is out, that could be Bellows role for a little bit.

Bellows when he was drafted was projected to be a top-six forward, but hasn’t gotten the opportunity to be in that spot. He played third-line wing in his short stint last season and started this year in the same role. That particular spot is still a bit of an open competition. Bellows though has done a commendable job thus far and has gotten from head coach Barry Trotz.

“A little bit of limited ice time but I was very comfortable with Kieffer’s game,” Trotz said to the media after the Isles’ win on Monday. “I thought he and Ross Johnston did a good job of establishing a forecheck and a physical game. My comfort level is good with both of those guys.”

If Bellows gets second line duties, Oliver Wahlstrom or Dmytro Timashov could finally get some game action on the third line. So too could Austin Czarnik or Otto Koivula.

All four players have yet to appear in a game while making up the mandated taxi squad.

Trotz has alluded to possibly making changes just to keep his guys and the opposition on their toes, and those four players are all suitable options. With Leo Komarov and Michael Dal Colle (coming back from injury) still on the fringe as well, they all have the ability to provide a shot in the arm for a bottom-six which has only accounted for one of the five Islanders goals through three games.

Missing Bailey for a bit might hurt the Islanders. He’s one of their most important two-way forwards and a reliable asset. But it could be a blessing in disguise.

That being an opportunity for some of the kids on the team to make some noise with him out.

For as much turbulence as there’s been in the relationship between the Islanders and Josh Ho-Sang, there’s obviously still hope there he has a future in the organization.

In a column from The Athletic today, Barry Trotz showed his support for Ho-Sang, who just began his new opportunity with Orebro over in Sweden.

“He’s a talented young man with a lot of skills,” Trotz said. “Just let him play in Europe, it could be great for him. Maybe the player in him just puts it together this year. I hope he has a ton of success there.”

The Islanders’ transition to UBS Arena continues to get closer each day. And with that there’s always new updates.

Last night was the latest and two things were made crystal clear: the facility will be home to the best ice in the NHL and the building will be ready for the start of next season “no matter what”.

The full clip from the team can be seen below:

Get an inside look at @UBSArena with Managing Partner, Richard Browne, as the construction of our future home has reached the halfway point! 🤩 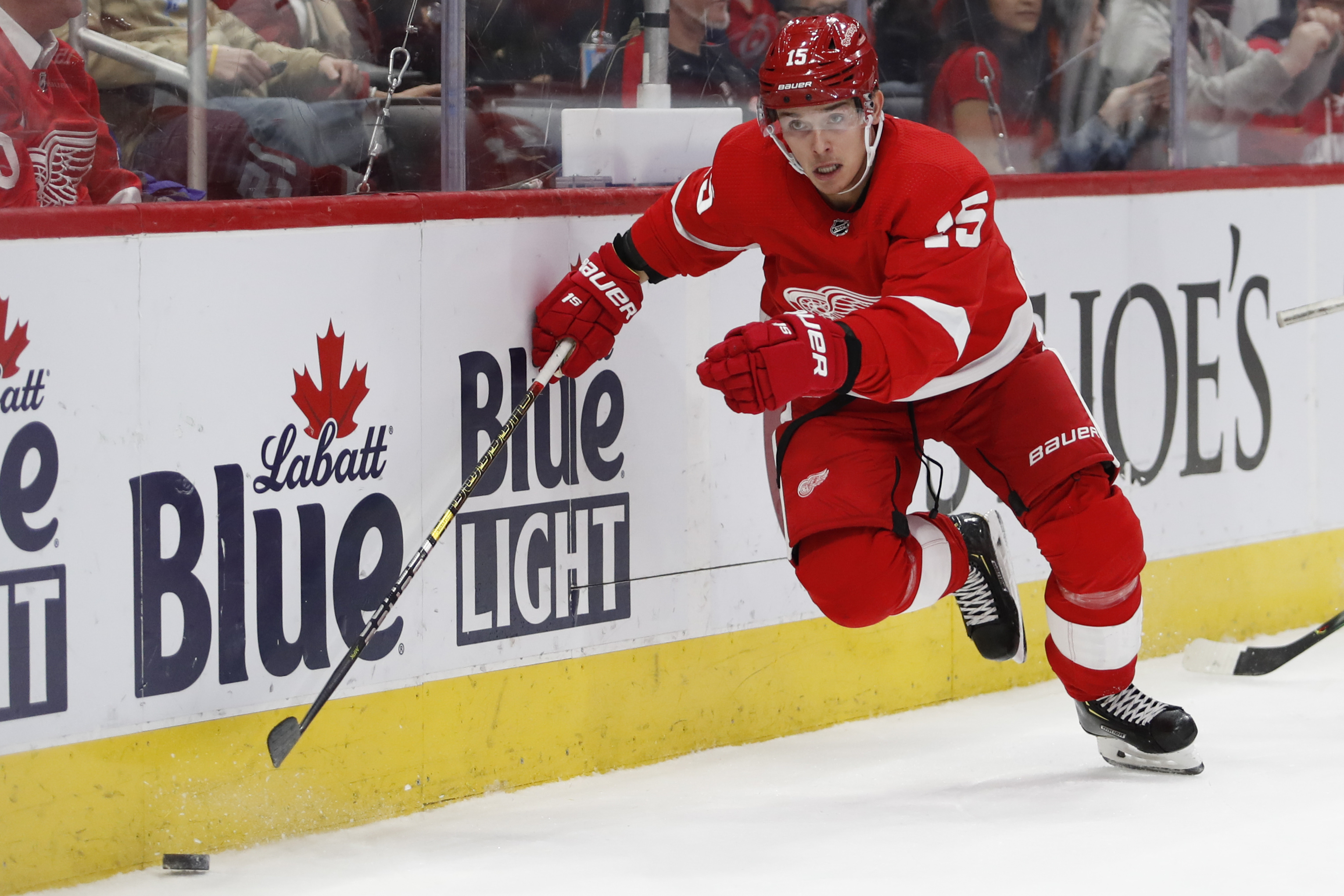 The Islanders took to the ice for their first training camp session yesterday and one of the players who will be in the fight for one of the open forward spots at camp got off to a good start.

Dmytro Timashov, whose rights Isles acquired a month ago from the Detroit Red Wings, stood out.

An unsigned RFA — although it seems he will be given a contract soon — Timashov is projected to be in the group looking to claim the third-line winger role left behind by Derick Brassard, who signed with Arizona last week after not being offered a new deal. He also has a solid chance of being on the taxi squad for the Isles as a result of the expanded rosters for the shortened season and COVID-19 protocols.

“He did a real good job. He’s a real solid player,” head coach Barry Trotz said to the media.

Timashov starting off strong could be an indication of why g.m. Lou Lamoriello dealt for him. Lamoriello actually drafted the 24-year-old when he was still running the Maple Leafs. So there’s a familiarity there.

“What stands out about him, he’s got a really good skill level,” Trotz added.

That word skill, the Islanders don’t have much of it aside from Mathew Barzal, Anthony Beauvillier, Josh Bailey and J.G. Pageau. So any injection of it will be welcome especially for where Timashov would most likely slot in the lineup. But he’s also an unknown to this point.

Timashov’s been seen mostly in AHL the past few years but did push his way on to the Leafs roster this past season where he played in 39 games and recorded nine points before being claimed on waivers by Detroit.

That’s what makes him a bit of a wild card for the Islanders at this particular moment.

“He’s not physically a tall player but he’s a physically strong player. I think he has a really good upside and a guy that can play multiple positions. He fit in really well today,” said Trotz.

Timashov has another nine days until the Islanders open the season against the Rangers at MSG. But in that time though, he could be the one who separates himself from the rest of the pack and wins a regular role.

As an under-the-radar signing, it would be quite the surprise to see Timashov get the spot over the favorites — Oliver Wahlstrom and Kieffer Bellows — but he’s got just as good a chance as anyone.

Everyone was well aware going into camp that the battle for the third-line wing was going to be one of bigger storylines to unfold. Timashov’s presence adds another element of unpredictability.

A true wild card, one maybe the Isles will benefit from.

If you’re an Isles fan, you’ve already fallen in love with Barry Trotz always telling it like it is. But when he basically says he sees his team as Stanley Cup contenders, it’s hard to not take him for his word.

Sure everyone knows the flaws facing the organization — does a sniper or two ring a bell? — but this group has now evolved with each passing season since Trotz arrived. And to be honest, this group has proven over the past two years they can play and defeat the best the NHL has to offer.

So, how about embracing it?

Hard to blame fans for fawning over the sight of Ilya Sorokin yesterday that was all over social media. Waiting over five years to bare witness to the so-called “goalie of the future” can do that.

He’ll be one of the top storylines over the next week, and when he finally speaks it should be interesting hear what he has to say.

Jakub Skarek posted his look for what he’ll be sporting throughout Isles camp. Very sharp.

The New York Islanders made the first NHL trade in 60 days. The last trade in the NHL saw the Islanders trade away top 4 defenseman Devon Toews to Colorado. General manager Lou Lamoriello has now traded for the rights to Red Wings prospect Dmytro Timashov.

This trade is an absolute win for the Islanders. If Timashov breaks out and solidifies a spot in the top 9, this trade makes Lamoriello look like a hero. But, if Timashov fades away to the AHL forever, no one remembers this trade. Future considerations for a possible up and coming prospect, it seems like a good deal on paper. But, the paper doesn’t matter, the player does. Now, who is Dmytro Timashov?

When Dmytro Timashov was drafted, he was praised as one of the most exciting players from the 2015 NHL Entry Draft. He was a very agile skater with great mitts for his young age. Elite Prospects called him a dangerous player who could wow audiences in the future.

It’s been 5 years since he was drafted, what happened to all this potential? Timashov now seems a step slower than the competition. And I’m never the guy who uses height against someone, but Timashov is lacking height. This doesn’t mean that he can’t use his height to his advantage though. He just needs to be taught how. Timashov will most likely be a top 9 forward in the NHL who could get some serious ice time on the power play kill.

Despite all the negatives I’ve just pointed out in his game, he still puts up some good numbers. In the AHL, he recorded 48 goals, 69 assists, and 117 points in just 241 games. That means he put up around half a  point per game.

Remember, the AHL isn’t just a league for bums, it’s real competition, and Timashov proved he could contribute. Timashov played in 39 games for the Maple Leafs this season and recorded 4 goals and 5 assists. I believe that with good coaching and a better system, Timashov could break out very soon. Dmytro Timashov will most likely start the year in the AHL and maybe break onto the 3rd line halfway through the season.