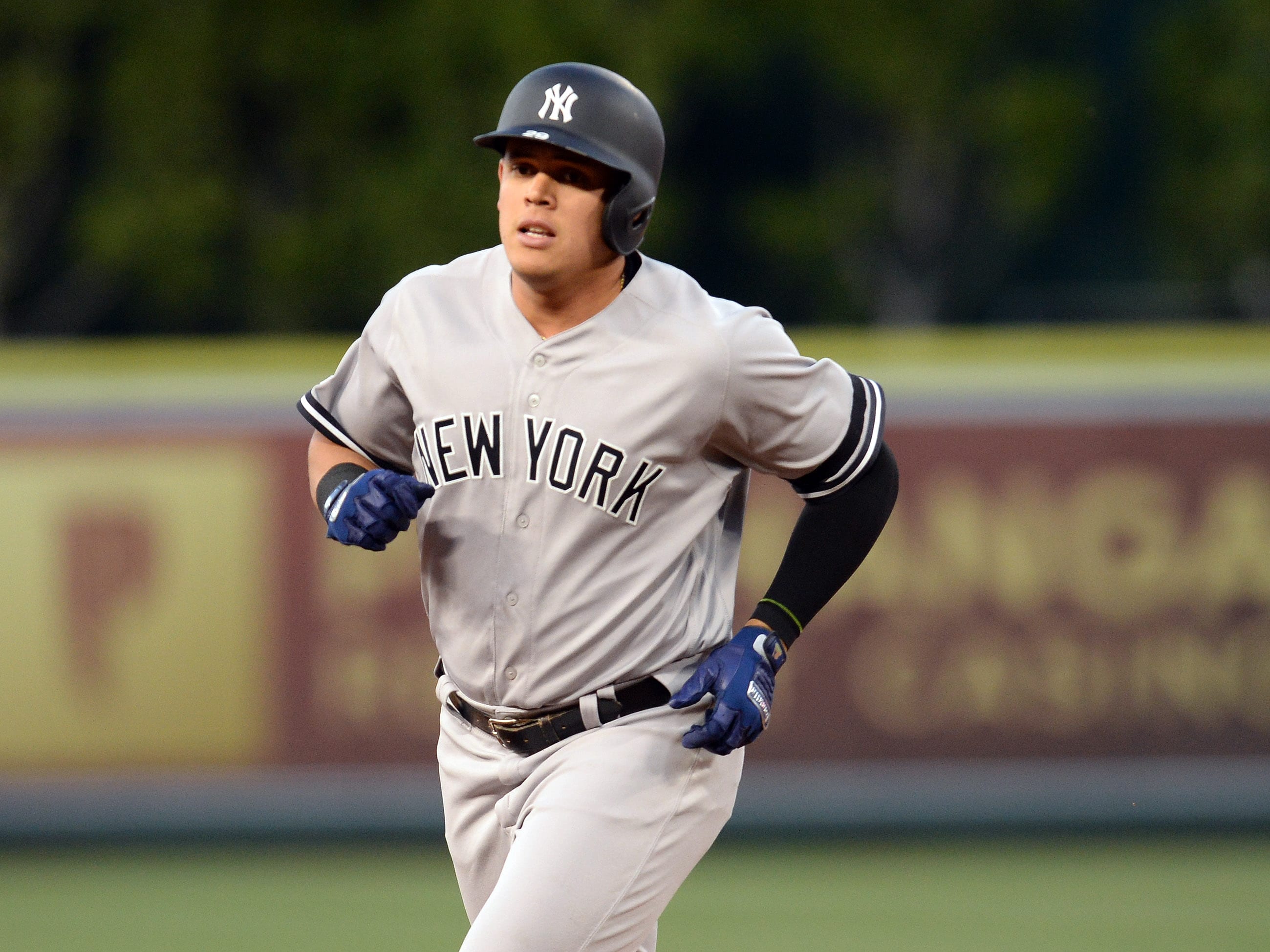 Even though he has well cooled off from his hot April and May, Gio Urshela continues to make an impact for the New York Yankees at third base. His average has dipped to .302, but has still provided big hits and great defense.

In Sunday’s 4-2 win over the Blue Jays, he had two hits, with one being a two RBI single. He scored a run later in the game on a passed ball with a crafty slide into home to avoid the tag.

On the defensive end, he has been absolutely fantastic. He has maybe the best range in the game, and has one of the strongest arms. Urshela is definitely a top candidate for a gold glove award at third this year.

Gio also doesn’t strike out very much. He has just 42 punch-outs in 228 at-bats, which is a good rate in modern-day baseball.

Though he isn’t hitting like he was earlier in the year, Gio Urshela is still making a noticeable impact for the Yankees on a daily basis. 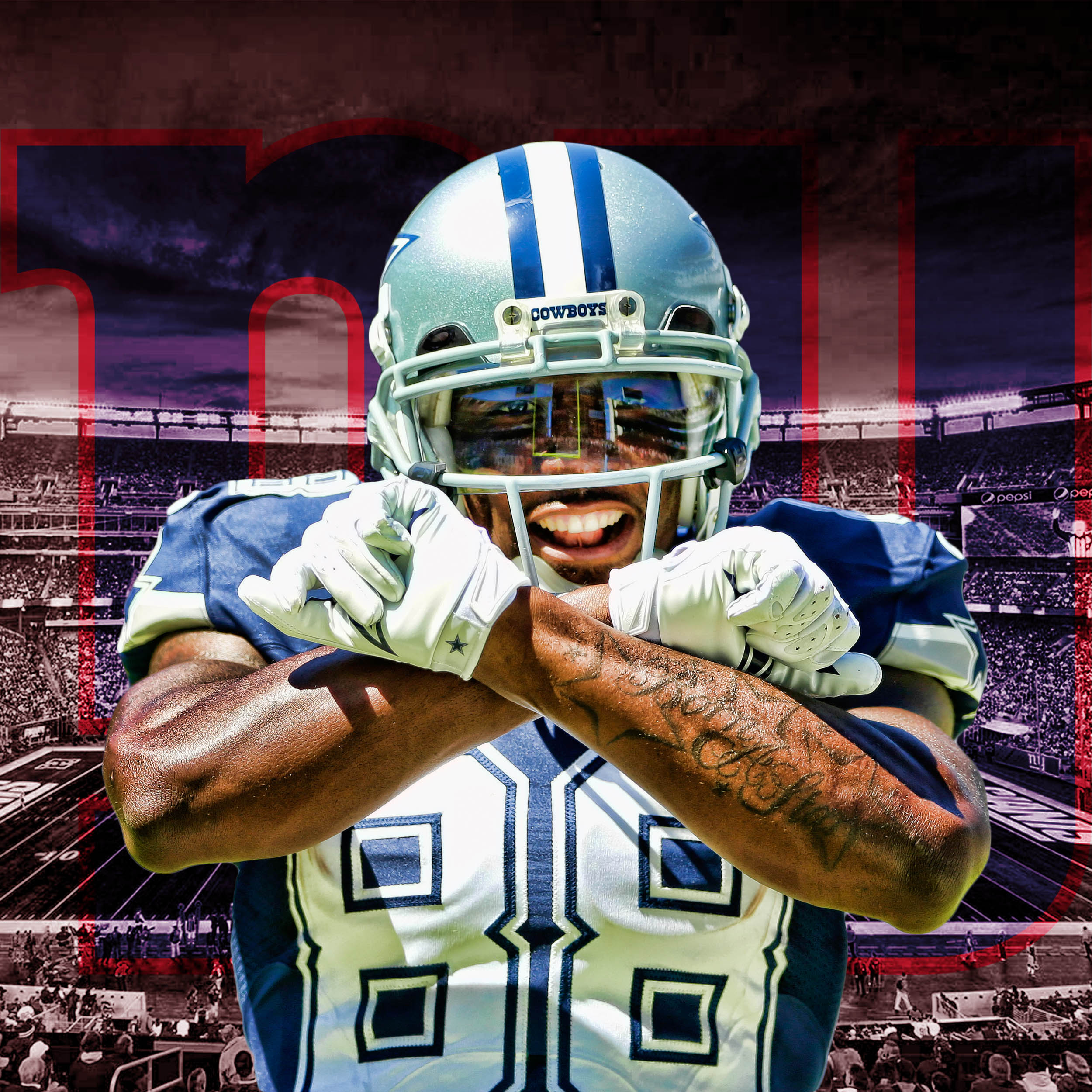 The New York Giants have rebuilt their wide receiver corps in the 2019 NFL offseason. Recently the idea has been floated out there for the Giants to sign a surprise free agent receiver.

Bleacher Report recently suggested that the Giants should sign former division-rival Dez Bryant. The reasoning behind this suggestion revolves around the Giants’ lack of a true outside receiver.

Golden Tate and Sterling Shepard are both excellent receivers. However, these two both work better from the slot. They both can play outside but are more effective playing as a slot receiver.

Dez Bryant is a 6’2″, 220-pound wideout who dominated on the outside as a member of the Dallas Cowboys years ago. However, Bryant is nowhere near the same player he was in 2014. It would be a terrible idea for the Giants to sign Dez Bryant.

Dez Bryant attempted to make a comeback midway through the 2018 NFL season. Bryant’s comeback was almost successful as he was able to strike a deal with the New Orleans Saints. Unfortunately, Bryant suffered a gruesome injury.

Bryant tore his achilles only days after signing with the New Orleans Saints. Dez had to be sidelined for the rest of the season and was not able to play a down as a Saint.

Coming off of a serious season-ending injury makes Dez Bryant an even riskier signing. But Bryant’s injury is not the only concern when considering him as a potential late free agent signing.

Dez Bryant missed the 2018 season due to injury but also due to the lack of a free agent market. Bryant was not signed by New Orleans until November. He spent the majority of the 2018 NFL season as a free agent with no teams interested in signing him.

This was not due to injury. This was due to Dez Bryant’s poor performance during the 2017 NFL season. After being Dallas’s primary receiver for years, Bryant came crashing down to earth. He played in all 16 games in 2018 and received a healthy 132 total targets. Considering this, his performance was awful.

Dez only caught 69 of those 132 targets in 2018. To make matters even worse, Dez lead the NFL in drops with 12 (Pro Football Focus). A receiver who has not played football in over a year and dropped double the amount of passes that he caught for touchdowns is not what the Giants need right now.

The New York Giants have solid options for their third receiver position, such as Cody Latimer and Corey Coleman. It would be a terrible idea for the Giants to bring in a high-character, high-risk, low-performance player like Dez Bryant in 2019. 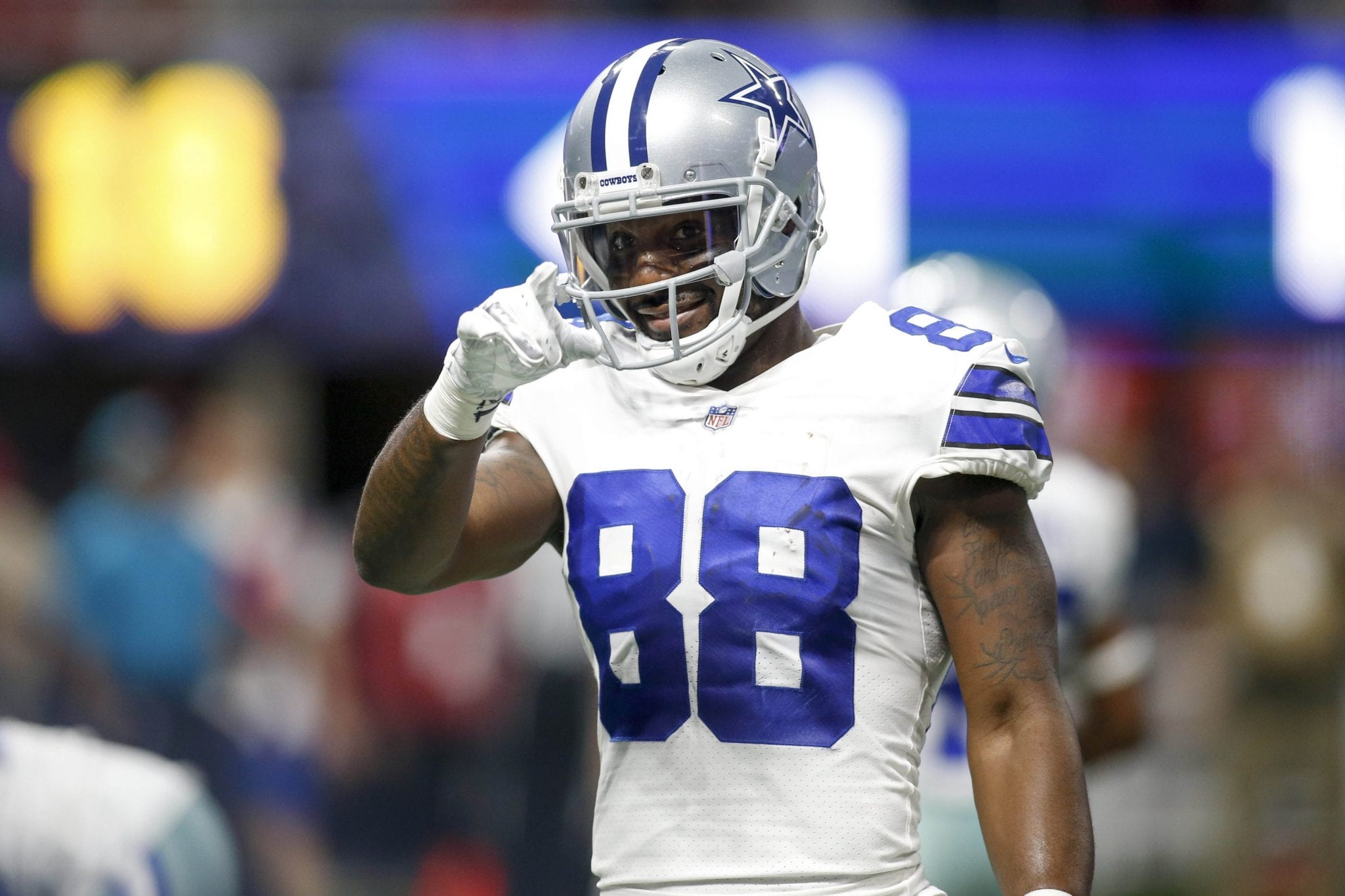 With the New York Giants lacking a true big body receiver to compete in the red zone, it’s possible they reach out to former Dallas Cowboys star, Dez Bryant.

While I don’t believe they will pursue him in free agency, it’s possible Bryant earns a workout with the team and is offered a minimum deal for one-year to see if he’s capable of producing in the NFL. Dez suffered a significant injury last season with the New Orleans Saints before even taking the field in a regular-season game.

An Achilles tear set him back an entire year, but he’s been working back from the injury with success. The Giants, an unlikely suitor, would utilize him in the slot at his age.

He doesn’t have the breakaway speed to be a wideout at this point in time, making him better utilized as a crossing-route specialist with good hands.

What would the New York Giants be getting from Dez Bryant?

The 30-year-old racked up 838 yards on 69 receptions with six scores in his final season with Dallas in 2017. The Giants currently have a solid amount of talent on the roster with Sterling Shepard and Golden Tate, making Dez unnecessary, but it’s never a bad thing to add competition and kick the tires on a once-dominant player.

I would consider bringing him in on a test trial for no guaranteed money and an incentive-based contract. There’s no team that will likely consider him a starting option at this point in his career unless he really proves the Achilles injury hasn’t set him back. Being a veteran, however, does present value for the younger receivers.

He’s also a capable leader with the fire to promote success on the offense. An interesting idea that I anticipate will amount to nothing. 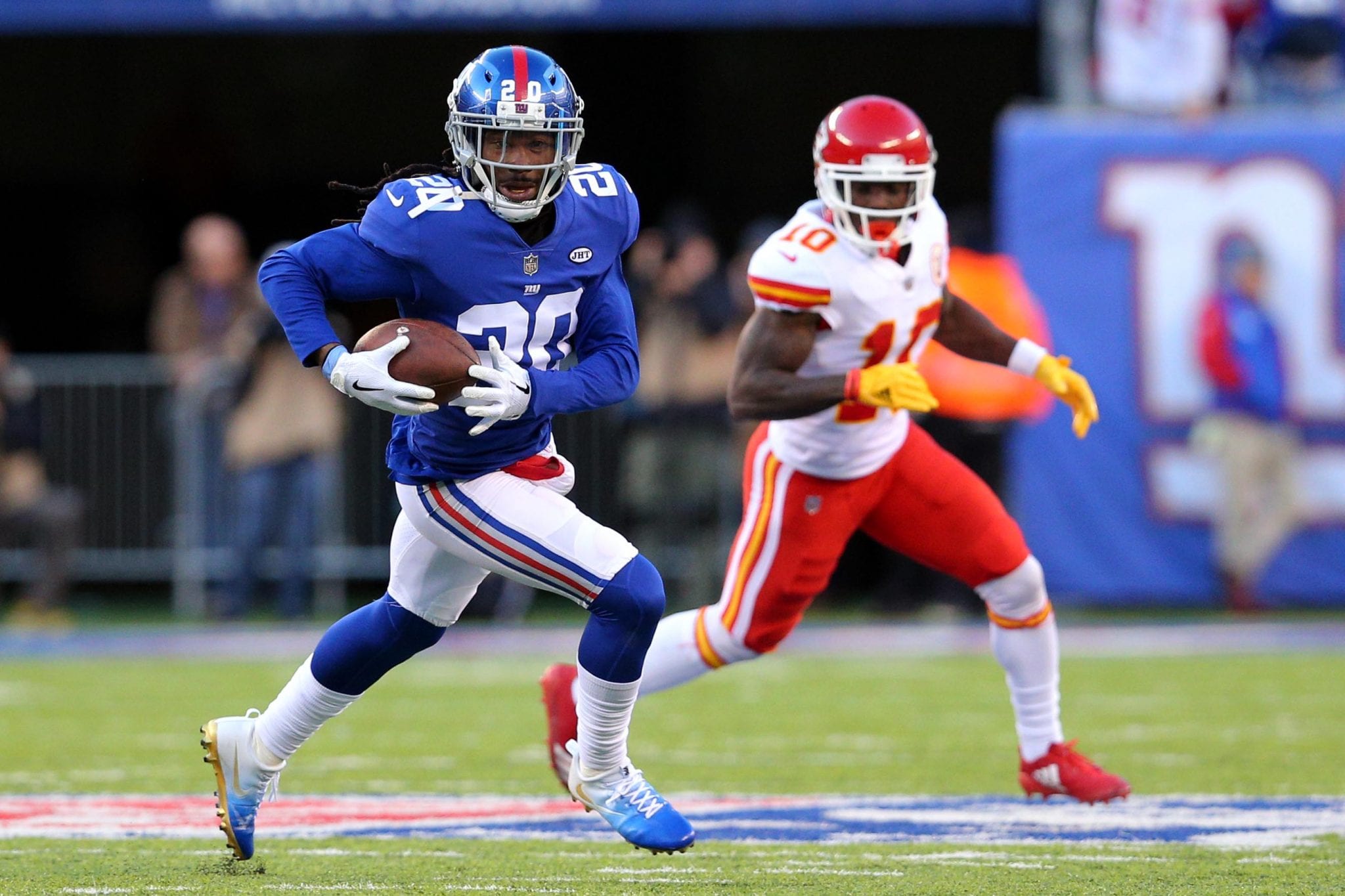 In 2017, Janoris Jenkins took a major step back from the previous Pro Bowl version of himself in ’16 with the New York Giants. Last season, his effort was in question as he visibly allowed receivers to beat him and failed to make easy tackles in the open. This was uncharacteristic of the lock-down corner, but the degradation of the locker room aided in Jenkins’s demise and the humiliation of the defense as a whole.

This offseason, GM Dave Gettleman brought in defensive coordinator James Bettcher to overhaul the defensive scheme, signing fresh linebackers to promote a 3-4 defense that dominates the trenches. While the front of the defense was provided support, the secondary still lacks depth and starting talent. Gettleman has been known to leave inadequate aid in the secondary in favor of building through the defensive line.

Being that the secondary is stripped, Jenkins will need to take a bigger role in 2018 and return to his former self. The Giants paid the star corner $62.5 million over five-years with $28.8 million guaranteed. A hefty contract for a player that was only a tad above average for the Rams.

Jenkins missed a game in week two of the regular season against the Detroit Lions due to an ankle injury. The ailment never fully healed as he continued through the season despite the injury.

“I came into it [the season] with it, but I didn’t let anybody know until it got worse,” Jenkins said in April.

While the injury certainly played a part in his overall level of play, his effort remained abysmal as you can see in the clip above. This was one week after being suspended for not showing up to practice and not telling anyone where he was or what he was doing.

Although his effort and health were below acceptable in the 2017 season, we should expect to see him return to his former self this season.

With Bettcher, Jenkins will play a man coverage role, which is his strength. We all remember his beautiful games against Dez Bryant. Allowing him to play his game and utilize his strengths on the defense will ultimately help him bounce back from a disastrous ’17. Additionally, he will be back to full strength and will start the season with a fresh start on a new defense.

There has been much chatter going on around the league, but not a single team including the New York Giants have seriously pursued 3x pro bowler, Dez Bryant. At 29, there is still plenty of gas left in the tank for the former Cowboys receiver.

If the Giants were to grab Dez out of free agency, we would be feasting our eyes on one of the best offensive strike forces the NFL has to offer.  The most pressing question in regard to Bryant is his durability, as he’s only played four full seasons in his eight-year career.

Bryant finished the 2017 season with 69 receptions for 838 yards and 6 touchdowns. A less than par performance from the once dominant receiver, and we all know how he fared against Giants’ Janoris Jenkins. One of Bryant’s most undervalued skills is his blocking ability, which would undoubtedly benefit Saquon Barkley, and his pass-catching prowess would take some of the pressure off of Odell Beckham Jr.

Dez hasn’t seen a contract offer since the Baltimore Ravens, which means that like Dominique Rogers-Cromartie, Dez is asking for too much money. Additionally, Dez is looking for a one-year “prove it” deal, which attests to his confidence in a bounce-back season. With his decline in production and performance in the last three-years he is not necessarily in any position to be making demands. Does he have the talent? Without question! Does he have the competitiveness and the will power to get back to the player he once was four-years ago?  Not a doubt in my mind!

As of right now, none of that has happened yet, which is why I believe that if the Giants wanted to, they can entice Bryant with an offer he would go for. One that the Giants can afford and give Dez the only thing he wants besides a Super Bowl ring, and that’s to remind the Dallas Cowboys that they made a big mistake in letting him go.

One of the best offensive strike forces the Giants have seen on paper?

Future Hall of Fame quarterback Eli Manning is certainly hungry for one more ring; Odell Beckham Jr. looking to prove the talking heads of the media wrong, the young, loyal, and reliable Sterling Shepard, stand out tight end Evan Engram, Saquon Barkley at running back – not to mention the best prospect in the draft, a brand new offensive line. Should I go on? You guys get the point,  Dez would only be adding onto the hype of this already stacked Giants offense.

Why should the Giants pass on him?

The Giants don’t have much cap-space remaining to sign Bryant, as the recent signing of Russell Shepard brings their moneys down to about $7 million. In addition, Barkley has yet to sign his rookie deal.

Besides the cap-space being too low to offer Bryant a fair contract, bringing him on may cause too much commotion in the locker room. Bryant likes to be the center of attention, and with Beckham, Shepard, Engram and Barkley taking up a lot of the offensive plays, he may not get the action he requires to feel accomplished. This factor alone is significant enough for the new regime to walk away from a potential deal.

The Giants also signed former Danver Broncos receiver Cody Lattimer who’s younger and faster than Bryant. Lattimer is a premier blocking receiver and has the potential to develop into a solid pass-catcher.