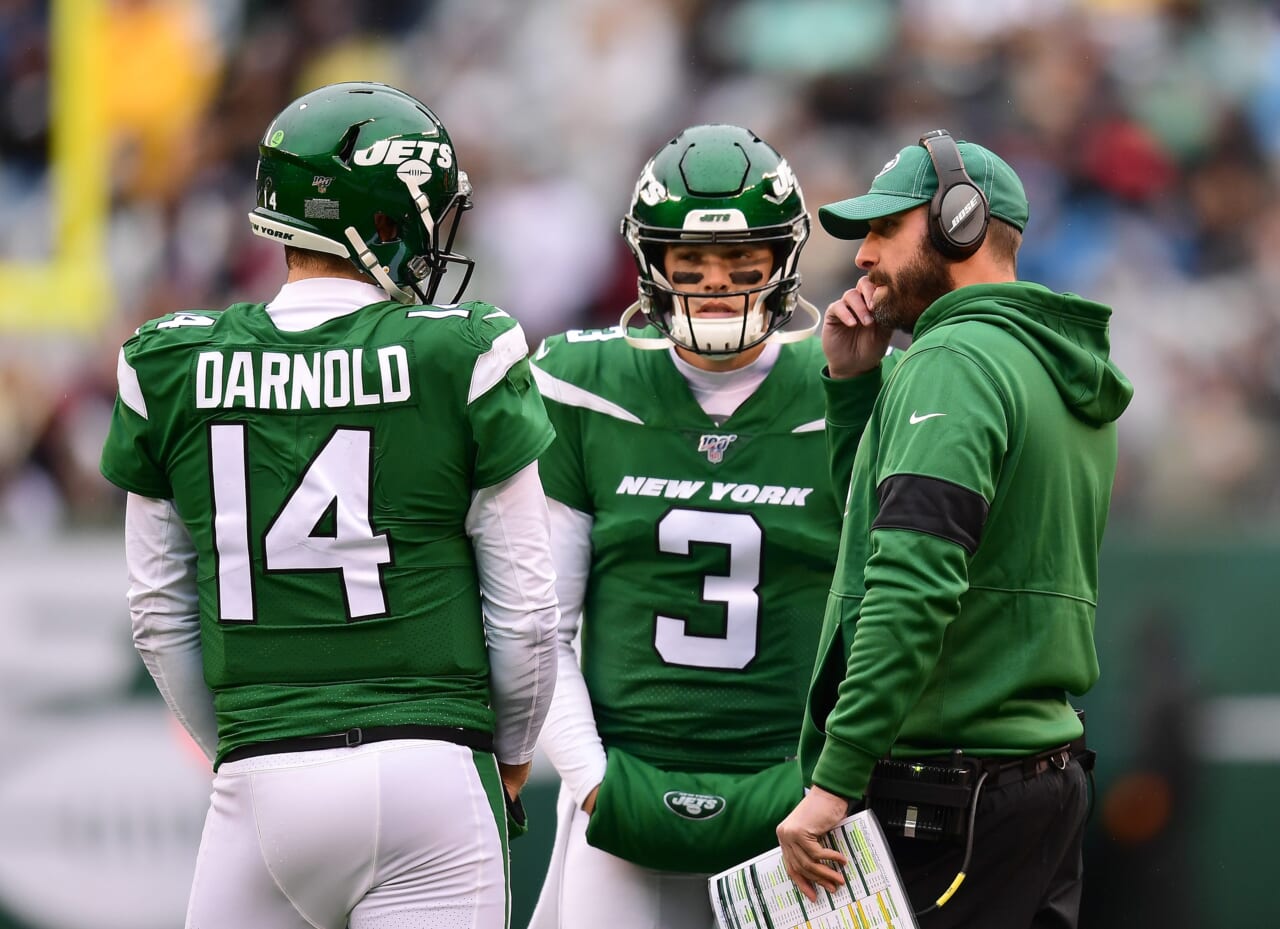 The New York Jets have re-signed David Fales and are reportedly looking at draft options to back up Sam Darnold. But that’s not the way to go.

The New York Jets face quite the conundrum at the quarterback spot as the NFL Draft approaches. It’s one they’re not used to, and one they’re somewhat blessed to encounter. But if they don’t handle it carefully, their new hope Sam Darnold could be the next name added to the list of false saviors under center.

Per Ian Rapoport, the Jets interviewed quarterback James Morgan (virtually, of course) in their preparation for this month’s NFL Draft. The high school star from Green Bay threw for 8,654 yards and 65 touchdowns over four seasons at Bowling Green and Florida International. A strong showing at East-West Shrine Bowl in St. Petersburg thrust Morgan up the board in a talented quarterback class. Jalen Hurts, Cole McDonald, and Shea Patterson are among the other notable names that can go in the latter stages.

The Jets have, or better have, no interest in the top of the class headlined by LSU’s national champion Joe Burrow. They already have apparently found their long-term name, one that’s eluded them for decades.

Darnold has everything one’s looking for in a franchise face: talent, college heroics, respect for the game and his new city. The ability to throw the deep ball certainly helps, as does the way he can move around and extend the play.

Yet, Darnold isn’tÂ there quite yet. For every flash of brilliance, there’s a head-scratching play. For every masterpiece like the one we saw against Dallas, there are ghost sightings like the Monday night disaster against New England.Â

Simply put, Darnold needs to learn a few more lessons before he can enter the NFL’s upper echelon of throwers. Thus, he is not in a position where he can be the oldest quarterback in the room. Media availability during his rookie campaign constantly featured tributes to his veteran mentor and synchronized hair-swiping specialist Josh McCown.

The Jets also should continue to contemplate the backup quarterback spot for practical purposes. Darnold has missed six games over his first two seasons due to injury and illness, games that have become Jets losses with no exception. Neither should be held against Darnold…football is an unpredictable, violent game…but that doesn’t mean the Jets shouldn’t be prepared.

Right now, the emergency plans come in the form of David Fales and Mike White. The recent re-signee Fales has thrown 48 passes over a six-year career. That’s 48 more than White, a former Dallas Cowboys draft-pick who was dumped for the undrafted Cooper Rush as the number two man behind Dak Prescott.

That contingency plan isn’t on the Jets’ roster right now. Nor should they look for it in the draft.

This is the most hopeful the Jets have felt in their never-ending rebuild in a long, long time. But with that hope comes a sense of delicacy. Unforced errors and avoidable distractions must be kept to a minimum. Drafting a quarterback is one of the ways to buck that concept.

Today’s era of fantasy football and jersey sales dictates that not only must you rack up the wins, but you have to put on a show while doing it. It’s the football equivalent of a Michael Bay movie sweeping the Oscars.Â Vince Lombardi famously declared “winning isn’t everything…it’s the only thing”. That bit of wisdom has appeared to have gone the way of the incidental facemask, the 20-yard extra point, and the Houston Oilers.

Sometimes, winning can’t save you. Alex Smith found that out the hard way in Kansas City. The veteran made his bread and butter mostly through routine checkdown throws, but nonetheless went 50-26 as the Chiefs’ starter. That didn’t stop Kansas City from trading up in the draft to take the electrifying Patrick Mahomes out of Texas Tech. Such misfortune came four years after Smith was not granted his starting job back after guiding San Francisco to a 6-2-1 mark before an injury. He lost the role to dual-threat sensation Colin Kaepernick back then.

Tyrod Taylor was another victim in 2017. He had guided the Buffalo Bills to their chance at the postseason in nearly two decades, but pedestrian numbers caused Buffalo brass to insert rookie Nathan Peterman midway through the season. Taylor won his job back temporarily, but, like Smith before him, lost out in the long-term to an exciting younger dual-threat in Josh Allen.

This fickle NFL world is not one for patience. The Mahomes process in Kansas City, for example, is one of the rare occasions where the practice of resting the rookie behind a veteran still went on. If a young backup quarterback steps in and completes a ten-yard pass nowadays, innumerable columns are launched expounding on why that understudy should get an expanded role.

That’s not the kind of pressure Darnold needs right now. If Darnold is already being told that a contingency franchise option is already in the cards, it could wreck his confidence. Such a phenomenon is not unprecedented, even from a day three option. Robert Griffin III was supposed to be the guy in Washington, but their long-term option wound being fourth-round man Kirk Cousins after injuries took over Griffin’s short-lived brilliance. It nonetheless created uncomfortable conversations about who would be the top man if and when Griffin was healthy that could’ve been avoidable.

What makes the Jets’ apparent quest for a quarterback all the more puzzling is that there are options available on the free agent market. If the Jets wanted the upgraded version of Fales…an experienced quarterback who has played in an Adam Gase offense and has proven very reliable as a fill-in starter…Matt Moore is literally right there. Another Super Bowl champion, the 47th edition’s MVP Joe Flacco, is also there for the taking. His brief time with the Broncos proved his days as a franchise starter are over. But the peace of mind of providing invaluable mentorship to Darnold and being just passable enough in case of an emergency (85.1 passer rating in eight Denver starts) could be one of the biggest additions to the Jets’ roster.

The value of an accomplished veteran backup was on display during the Mark Sanchez era. Mark Brunell, he of the Jacksonville Jaguars’ earliest glory days, threw only 15 garbage time passes in a Jets uniform. But the effect he had on a young Sanchez was apparent.

“He has a calming presence when everything is spinning out of control,” Sanchez said of Brunell to Rich Cimini of ESPN during the summer of 2011. “When you’re not having a good game or practice is going too fast and you’re just not right, he’s got this way about him.”

Brunell was around for the Jets’ last playoff appearance. Over two seasons with Brunell backing him up (2010-11), Sanchez threw for 6,765 yards and 43 touchdowns. Those numbers dropped to 5,327 yards and 25 touchdowns in two New York years sans Brunell. Sanchez’s 2009 rookie backup (Kellen Clemens) was no issue, but his 2012 understudies were in a constant spotlight. Nothing more needs to be written about the disastrous Tim Tebow experiment, while national champion and draft pick Greg McElroy wound up briefly taking over for Sanchez in the season’s dying stages.

The fact that the Jets have plenty of other holes to fill in the 2020 draft should scare them further away from the quarterbacks. Even with an extra pick, needs on every side of the ball need to take precedent. The receiving group is very weak without Robby Anderson. General manager Joe Douglas hinted that the offensive line renovations might not be over. A spell option for Le’Veon Bell must be considered if both Bilal Powell and Ty Montgomery find new homes.

Defensively, a weak pass rush and shallow secondary must be addressed. Even a kicker should be considered with the on-again/off-again inconsistency of Brett Maher being the only option of the roster.

At the end of the day, the interview with Morgan (and perhaps others) could well be simply the Jets doing their due diligence. Any advantage one can gain during this most unusual draft process is there for the taking. But the Jets can’t afford to make this a priority.

Time will tell if Darnold is the savior under center the franchise has long sought. Drafting a quarterback, inadvertent as it would probably be, would provide a premature “no” to that question, or at least hasten the path to that answer. 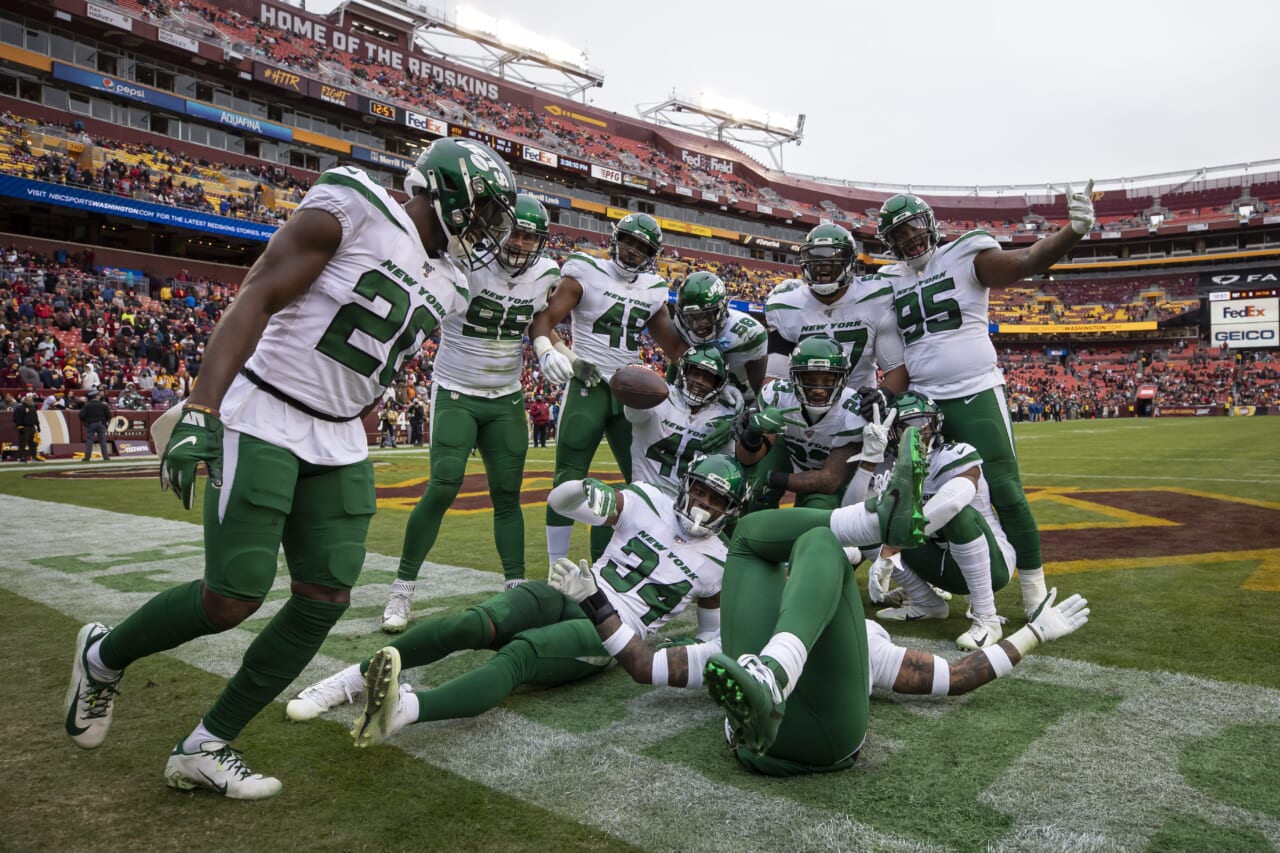 David Fales has been a well-traveled backup for Adam Gase and the New York Jets. Heâ€™s followed Gase and now got to sit behind Darnold for a bulk of last year as both of the other backups going down last year. Fales is reportedly a high IQ guy and the former San Jose State product with good knowledge of the offense will return to fight for the backup job next season.

Fales played two years at San Jose State as the starter. In those two years, Fales threw for 8,382 yards, 66 TDs, and 22 INTs. Although San Jose State is not a big school, those numbers are very impressive. Fales hasnâ€™t gotten a lot of reps in the pros. He did get some legitimate reps in 2018 and he did ok. He had 265 yards, 1 TD and an INT in 2018. Fales is a backup caliber player. He may have untapped potential. At 29, time is winding down to tap into that potential.

How Does He Fit For Next Season

Fales will compete for the backup QB job. He doesnâ€™t seem like the best guy to be the backup for Darnold. He canâ€™t provide mentorship because heâ€™s played less than Darnold. He does have knowledge of the offense and that is a favorable trait because of the presumed lack of preparation that the Jets will have due to COVID-19. Fales will compete, be given a shot to take the job, but he should not be counted on if Sam goes down. The New York Jets should bring in another body whether in the draft to develop into a good backup or bring in a vet to mentor Sam. Some guys who could be good guys are Joe Flacco, the former starter in Baltimore that struggled in Denver last year and Matt Moore a career backup with ties to Gase.