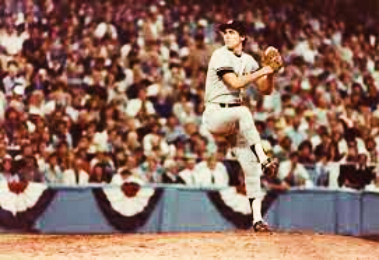 There probably isn’t a day that goes by that something in New York Yankee history hasn’t happened that is memorable in their 109-year history. So here is a look at this week’s happenings in that history. This week is particularly interesting.

On this Independence Day, Yankee pitcher Herb Pennock and the Athletics pitcher Lefty Grove had a game for the history books. The game went 15 innings, with the Yankees winning 1-0. Pennock had one bad pitch in the game. He struck out the first 18 in a row he faced and the last 21 in a row—quite a pitcher’s duel.

New York Yankee catch Bill Dickey punched Carl Reynolds in the face causing a double fractured jaw. Dickey was suspended for 30 days. It all happened after the Yankees lost the first game of the doubleheader 5-3. In the second game, Joe Sewell threw a ball to home with Reynolds on his way. The ball and Reynold arrive simultaneously, resulting in the collision. Dickey wouldn’t have it and popped him one; that is still a historical event talked about today.

In 1939 on Independence Day, Lou Gehrig delivered his famed address to the crowd at Yankee Stadium. The “I am the luckiest man in the world” speech is still one of the most iconic in all of baseball. But, unfortunately, Gehrig would die almost two years after his speech of  amyotrophic lateral sclerosis, often called “Lou Gehrig disease.”

Legendary Yankees pitcher Dave Righetti got the first Yankee no-hitter since Don Larsen’s perfect game in the 1956 World Series. Righetti celebrated on the mound after no-hitting the Yankee’s most intense rival, Boston Red Sox. He was also the first lefty pitcher to do it since 1917 when George Mogridge accomplished the feat against the same Boston Red Sox. It was the first Yankee no-hitter for the young New York Yankees.

The New York Yankees dedicate a monument in center field to the last Lou Gehrig, honoring their deceased captain. Gehrig had died of ALS just a month earlier.

It was the All-Star Game, the fourth ever. Famous Yankee first baseman Lou Gehrig drove in four runs in the game with a homer and double. The American League beat the National League 8-3. It was the first time a U.S. President attended an All-Star game. Franklin Roosevelt threw out the ceremonial first pitch.

At the time, the Yankees were playing at the polo grounds in New York City. The polo grounds had no lighting. The Yankees won the second game of a doubleheader with only one hit. The game had to be postponed due to darkness. The Yankee would never win another by just one hit until 2016 against the Tampa Bay Rays at Tropicana Field.

Derek Jeter hit the first Yankee home run in an All-Star game in 42 years. The last to do it was Yogi Berra in 1959. 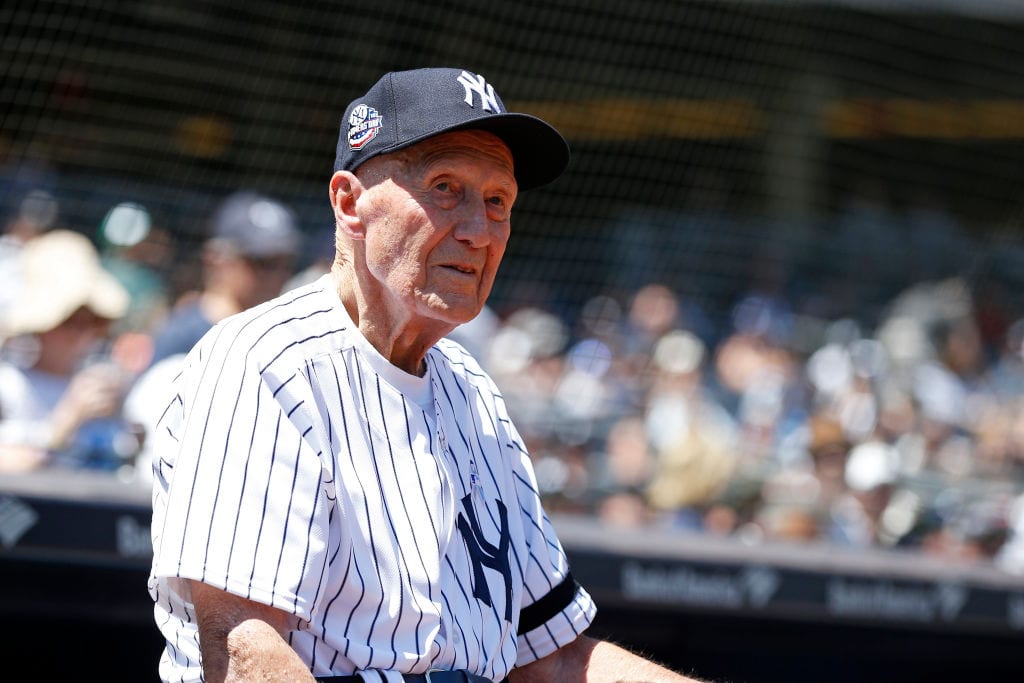 The New York Yankees have a great history of starting pitching and relievers. They arguably have the best closer of all time and a top 5 pitcher in the league every decade.

Ford won 25 games in his CY Young award-winning season, which is almost unreachable in this day and age. He was probably the most consistent pitcher in the 50s and never had an ERA over 3.24, helping him win the ERA title twice.

He was also a 10-time all-star, 6-time World Series champion, and even won a World Series MVP. A sure hall-of-fame player if the game has ever seen one.

The triple crown is usually associated with hitters, but Gomez won the triple crown for pitchers twice! In 1934 and 1937, he led the league in wins, ERA, and strikeouts.

Gomez was also clutch when it counted, he did not lose a single postseason game in his career. This made him the main reason for the 5 World Series titles the Bombers won in the late ’30s.

In 1978, Guidry had one of the best seasons ever for a pitcher. He won 25 games, had an astounding 1.74 ERA, and nearly 250 strikeouts. That is a type of dominance only a few pitchers have reached in their careers.

He was even a slick fielder throughout his career, earned himself 5 Gold Glove awards.

Along with Babe Ruth, the New York Yankees stole another piece from the Red Sox, Ruffing helped them win 6 World Series and achieved 6 all-star appearances.

Ruffing and Gomez was a deadly one-two punch back then, both had 20-win seasons in the late ’30s. If they held their opponents to under 4 runs on average, them they were guaranteed to win a lot of games with Ruth, Gherig, and others in the lineup.

The model for health and longevity, Pettitte led the majors in games started three times in his career. He pitched 200+ innings in 10 seasons of his career and even won 20 games, in 1996.

Pettitte, as well as other pitchers above, helped the Yankees win 5 World Series rings in the late ’90s and early and late 2000s. He pitched in and won many big games for the New York Yankees, making it hard to leave him out of this rotation.

An argument can be made for Spud Chandler, Mike Mussina, CC Sabathia, and Mel Stottlemyre to be in this rotation, but the five pitchers above allowed the Yankees to be. most successful throughout their history.

He even pitched 200 innings one season as a reliever, proving he can stay in games and consume innings. He led the league in saves four times as well.

His slider and ability to escape bases-loaded jams throughout the mid-2000s gives him a spot on this team. He could come out of the bullpen in the middle of an inning and let up no runs.

Robertson’s stuff allowed him to earn the second-best strikeout percentage in Yankees’ reliever history. He is the only active pitcher on this team.

Page only had an 8-year career, however, he led the majors in saves twice. He was also a 3-time all-star and lit up the radar gun.

Lyle was a huge contributor to the 1977 and 1978 World Series Champion teams.

He led the league in saves in ’76 and would usually finish off games when he appeared. His most significant statistic was winning the 1977 CY Young award as a reliever.

Lyle could pitch multiple innings in relief, making him a good candidate for middle relief and setup man.

Beginning his career as a starter, Righetti was converted to the bullpen.

He is second on the Yankees all-time saves list, behind none other than Mariano Rivera.

He led the majors in saves three times, made 9 all-star appearances, and had his best years with the Yankees.

Gossage dialed up the radar guns and blew away hitters with his high 90s fastball. Not many pitchers in the league could throw with such velocity in the ’70s, making it even tougher to react to and make contact.

There should be no argument here, Rivera won pretty much every award one can win as a reliever. He is the first unanimous hall of fame player in the history of Major League Baseball.

Any time “Enter Sandman” played on the loud-speaker, everyone in the budding knew the game was pretty much over. In 96 playoff appearances, Mo’ only lost one game.

He also had one of the most unhittable pitches ever, his cutter. He threw it inside on lefties and generated a lot of broken bats. He played on a level only a few relievers have reached in their careers.

When a bullpen consists of a Cy Young winner, two live arms, and the best closer ever, there is almost a guarantee the current game result as a win. A full 25-man all-time Yankees roster has been formed. This team could easily be the best group of players ever assembled.

Twelve home runs and 204 rbi’s over seven seasons for a position player are undoubtedly mediocre numbers. And if said player also had three managerial stretches with the New York Yankees that all netted positive results (34-22 prestrike in 1981; 14-12 post-strike; and 44-42 in 1982), they hardly merited many boldface declarations either. But few would dispute, despite those ordinary numbers, that the acquisition of Gene “Stick” Michael from the Dodgers on November 30, 1967, was a huge move for the Yankees in the latter years of the last century. It was bad news to all of Yankee land, and baseball, when Stick passed away in 2017.

Yankee lefthander Dave Righetti rode his 8-4, 2.06-era 1981 season to that year’s American League Rookie of the Year Award, granted to Rags on November 30. He posted a 74-61 record with 224 saves in the Bronx from 1979 through 1990. The southpaw led the league in saves in 1986, and won two AL Rolaids Relief Awards. He also came in fourth in the 1986 Cy Young voting and 10th in the MVP tally. Righetti led the American League in strike outs per nine innings in 1982.

The Yankees signed free agent righty Mike “Moose” Mussina to a six-year contract on November 30, 2000. The first of three highlights of his career in Pinstripes was a 1-0 win-or-go-home victory over Barry Zito and the A’s in Game Three of the 2001 ALDS, Second, his work in relief of Roger Clemens in Game Seven of the 2003 ALCS against the Red Sox ensured the game would continue to be played until Aaron Boone put his stamp on Yankee history. And his 20-win season in 2008 was the only one in his long career.

A Tale of Two Pitchers

Yankee November 30 birthdays are highlighted by two pitchers, good ones too, though the career of only one worked out well in the Bronx. Tall, lanky lefty reliever Steve Hamilton (1935) was famous for tossing a slow looping pitch which he called “the Folly Floater.” Steve had a taste of some good teams in his early years in the Bronx, and posted a fine 34-17 mark with 33 saves from 1963-1970. Righthander Bob Tewksbury (1960) debuted to a 10-9 record with the 1986-1987 Yankees. During his career Bob posted a 110-102 mark with the Cubs, the Rangers, the Padres, the Twins, but mostly five years with the Cardinals. A 19th-round Yankee amateur draft pick in June 1981, Tewksbury was traded away to the Cubs in July 1987 for a totally ineffective Steve Trout. This was one of many bad eighties trades in which the Bombers sent away young talent for veteran players.