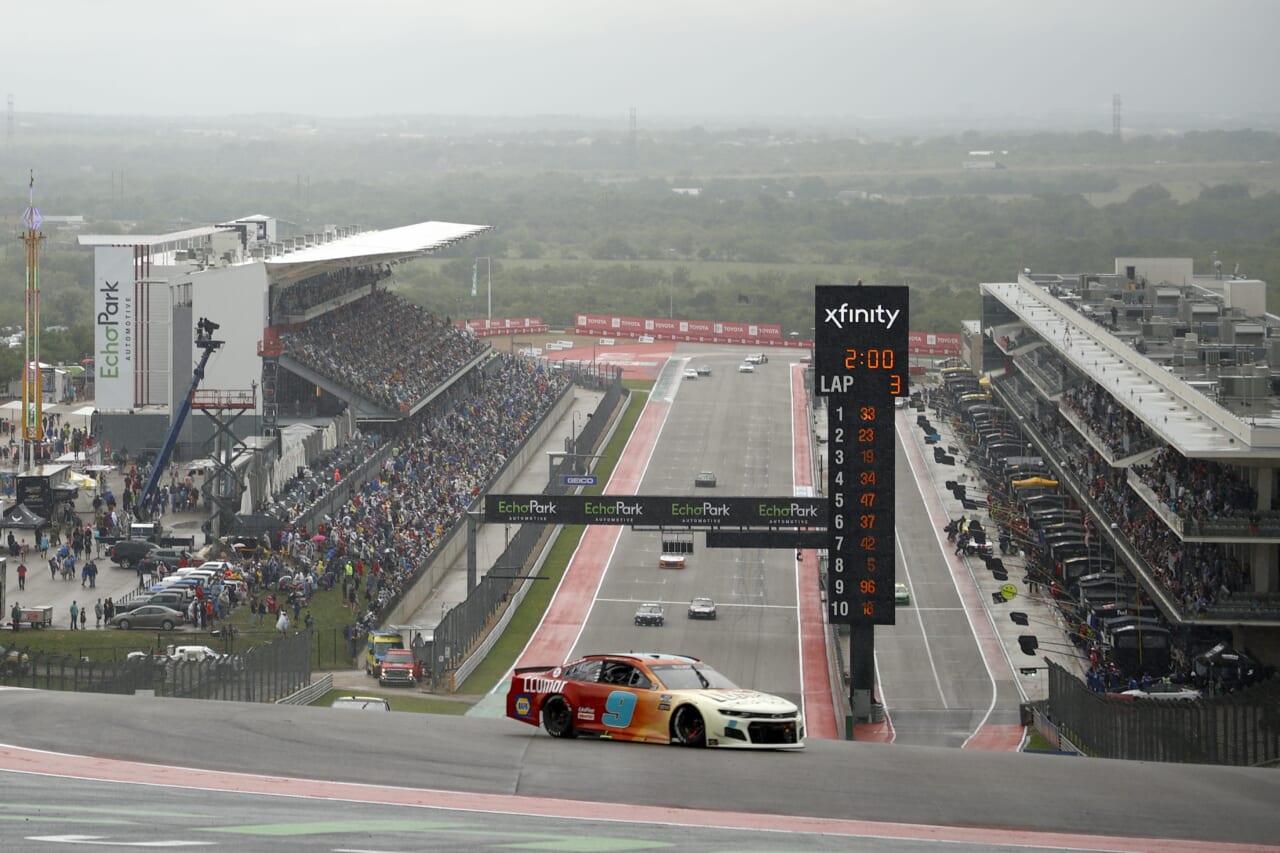 Chase Elliott braved the elements and some early chaos to reclaim his crown as NASCAR’s road course king en route to his first win of 2021.

Chase Elliott’s rain-shortened victory at the Echo Park Texas Grand Prix was historic in several ways. Not only did the defending Cup Series champion win NASCAR’s first visit to the Circuit of the Americas road course in Austin, TX, but he also captured the 268th Cup Series win for Hendrick Motorsports.

Obviously that’s just a huge win on multiple fronts,” Elliott said after the race. “Win number 800 for Chevrolet. Theyâ€™re a great partner to me personally. Theyâ€™ve played a massive role in the success of Hendrick Motorsports past and present. They’re a great group to work with so I’m super proud of them.

“To tie (Petty Enterprises) obviously is (also) a big one. The boss has been on us heavy about that record. He wants that record. So super glad that we could help with that today.”

With Elliott’s win, each of team owner Rick Hendrick’s drivers has won a race in 2021. He joins Larson, William Byron, and Alex Bowman, the latter-most of whom won last weekend’s race at Dover. HMS vehicles swept the first four spots.

Hendrick has enjoyed his share of success in the Cup Series, as his 268 career victories have been accompanied by 13 championships, the most recent earned by Elliott last season. Jimmie Johnson won seven in the No. 48 now occupied by Bowman, while Jeff Gordon won four in the No. 24 piloted by Byron. Laron’s No. 5 hosted Terry Labonte’s championship in 1996.

But Hendrick has a strong appreciation for the current run, as there’s a possibility that his quartet could all be racing for a championship come November’s season finale in Phoenix.

“We usually had one or two (contenders). Jeffâ€™s dominating, Jimmieâ€™s dominating. Now the sport is so competitive,” he said. “But to have four that can show up and win any weekend, thatâ€™s a testament to the effort that all those people back in the shop are putting into this program.”

The win also allowed Elliott to reclaim his monopoly on road courses. He had previously won four in a row at such tracks, seeing that streak end in February at Daytona. Elliott has now won six road course races, tied for third-most all-time with Petty, Rusty Wallace, Ricky Rudd, and Bobby Allison. Only Gordon (9) and Tony Stewart (8) have won more. COTA is the second of a record seven road courses on the 2021 schedule, the next being scheduled for Sonoma Raceway on June 6.

It’s safe to say that this one at COTA, which often plays host to Formula 1 and Sports Car races, will definitely be among the most unique. Special rain tires were used as downpours struck the Austin area. Unfortunately, the tires did little to combat visibility issues that plagued the early portions of the race and eventually led to its cancelation with 14 to go in the 68-lap event.Â

NASCAR has run full races on road courses in the rain before, including an Xfinity Series race at the Charlotte roval last fall. But several drivers were displeased after several violent wrecks plagued the first two stages. In a dangerous wreck that brought out a red flag on lap 25, Martin Truex Jr. slammed into the back of Michael McDowell’s Ford before his own No. 19 Toyota was plowed into by Cole Custer on the fast backstretch.

Six laps earlier, the days of Kevin Harvick, Christopher Bell, and Bubba Wallace all ended due to visibility issues. Harvick, who failed to finish a race for the first time since September 2019, minced no words about the situation.Â

“Itâ€™s the most unsafe thing Iâ€™ve ever done in a race car by a lot.Â  You canâ€™t see anything down the straightaways.Â  These cars were not built to run in the rain,” the driver of the No. 4 Stewart-Haas Racing Ford and 2014 Cup Series champion said. “We donâ€™t have any business being out in the rain, period.Â  All I can say is this is the worst decision that weâ€™ve ever made in our sport that Iâ€™ve been a part of, and Iâ€™ve never felt more unsafe in my whole racing career, period.â€

Sunday’s race became considerably tamer as the rain let up. NASCAR also mandated single-file restarts for the rest of the event. Elliott took over the lead at lap 50, when several leaders (including Bowman, Chastain, and Kyle Busch) went to pit road. The No. 9 team projected that they would be unable to finish the race without making another stop of their own and advised Elliott to simply build a lead that would procure a strong finish.

The return of heavy rains led to visibility issues resurfacing and standing water in the backstretch, allowing Elliott to secure the 12th win of his career.

“I’m super proud just of our whole group,” Elliott said. “I feel like we really kind of persevered through multiple challenges today. I didnâ€™t think we started the day off great, but we were able to kind of fight back, get to where we had a lot of pace there at the end. I’m really proud of that.”

Prior to Elliott’s statements, NASCAR announced that Hendrick and Petty would sign and auction off part of Elliott’s No. 9 car from the race with proceeds benefitting the Victory Junction Gang, a charity that aids terminally ill children. The charity was formed by Petty and his son Kyle in honor of fourth-generation racer Adam Petty, who tragically perished at the age of 19 in a crash during a 2000 practice run at New Hampshire Motor Speedway.

The NASCAR Cup Series returns next Sunday for the Coca-Cola 600 at Charlotte Motor Speedway (6 p.m. ET, Fox). This Memorial Day Weekend tradition is the longest event on the NASCAR circuit at 600 miles (400 laps around the 1.5-mile oval).