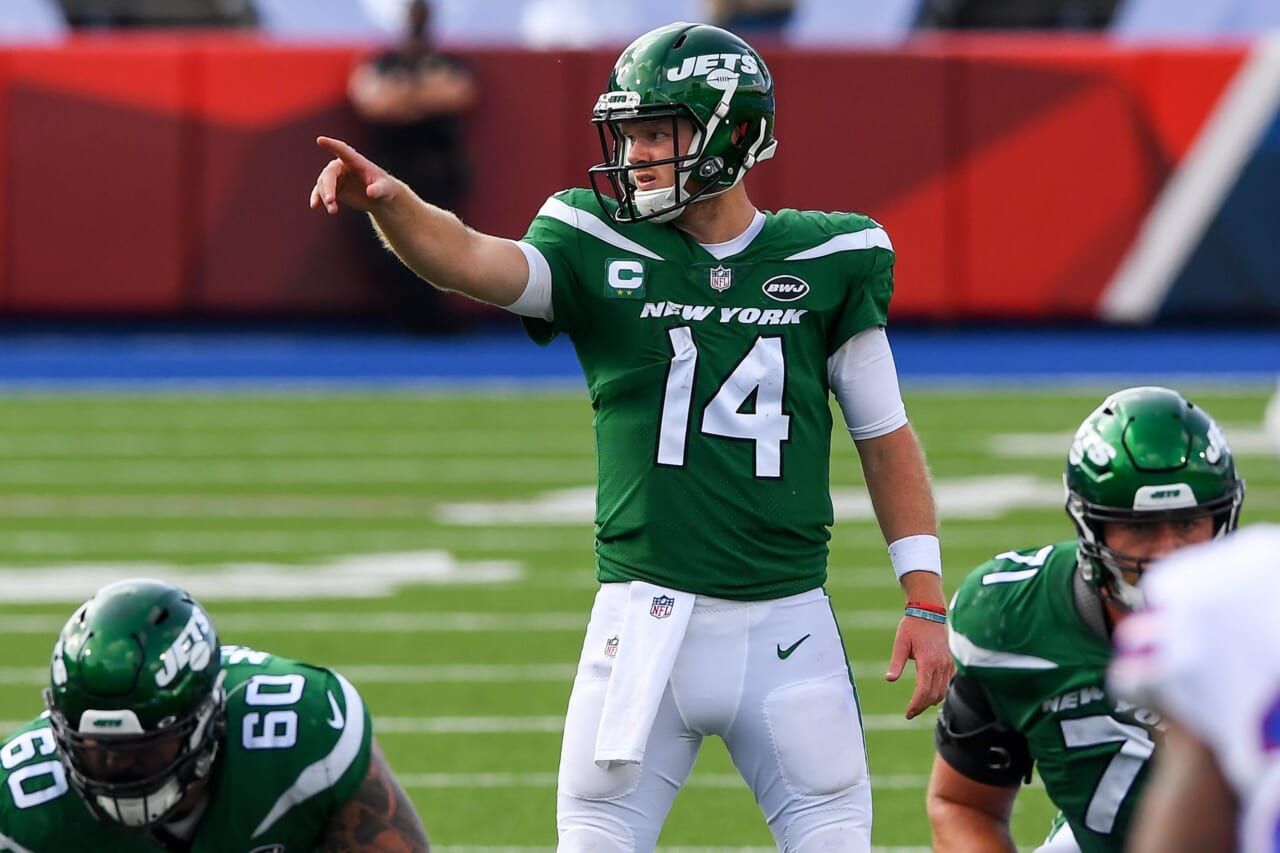 The New York Jets won’t have to wait long to check in on Sam Darnold, as they’ll open their 2021 season against their April trade partners.

The “main protagonist showing off their new significant other in front of their ex” episode seems to be a staple of every sitcom. But more serious matters await in Charlotte on September 12.

Five months after collaborating on a trade that set the post-Trevor Lawrence portions of the 2021 NFL Draft into motion, the New York Jets and Carolina Panthers will do battle to open their respective campaigns. That April transaction ended the Jets’ Sam Darnold era in New York, giving way to the Zach Wilson chapters of the green Gospel.

Blessed with a rare meeting between New York and Carolina, the scheduling powers that be at the NFL wasted no time in staging a reunion. The Jets will face off against an interconfertnce opponent on kickoff weekend for the first time since 2018, when the Darnold saga began with a win in Detroit.

Darnold won’t be the only former green representative partaking in the game. Other ex-Jets who saw nothing finer than Carolina include Robby Anderson, Juston Burris, Pat Elflein, and Frankie Luvu.

The Skinny on theÂ PanthersÂ

The Jets will likely be all too familiar with the predicament the Panthers currently find themselves in: trapped in a division with Tom Brady with no end to his reign in sight. Carolina hit the reset button shortly before Brady took his talents to Tampa, firing Ron Rivera and bidding farewell to franchise face Cam Newton after the 2019 season.

To replace the departed Rivera, Carolina hired Matt Rhule, who knew more than a thing or two about rebuilds on the college level. Following a one-year term as a metropolitan assistant (assistant offensive line coach with the Giants), Rhule went back to school and dragged Temple and Baylor out of the college football underworld. Rhule was reportedly strongly considered for the Jets’ job following Todd Bowles’ ousting, but he wound up returning to Waco for one more season (guiding the Bears to a Sugar Bowl appearance and a program-record 11 wins).

The football gods immediately bestowed Rhule another hurdle to leap, as injuries swallowed Christian McCaffrey after he became the highest-paid rusher in NFL history (four years, $64 million). Despite the loss of McCaffrey, the Panthers played respectable football. They were unable to escape another 5-11 season (their ten-win tally over the last two years is their worst since 2010-11), but nearly every game was competitive. Eight of their eleven losses came by single digits and they scored a late win over the playoff-bound Washington Football Team in December.

When removing veteran quarterback Teddy Bridgewater, Carolina was one of the youngest teams in football last season (26.05 on their 53-man opening day roster). Somehow, they managed to get younger, apparently finding the fountain of youth in Cleveland.

The Panthers were one of three teams (Dallas and Minnesota the others) that came to the podium an event-high 11 times during draft weekend. They used their opening pick (eighth overall) on South Carolina defender Jaycee Horn and ensured continued to surround Darnold with strong talents. Some of Carolina’s Saturday gems could particularly intriguing: injury issues landed Oklahoma State offensive force Chuba Hubbard in the fourth round, while another former Gamecock, Shi Smith, could become a hidden gem in the sixth-round.

Defensively, Horn will join Burris and versatile sophomore Jeremy Chinn in the secondary. Veteran A.J. Bouye likewise joins the fold, though the former Denver Bronco is missing the first two games of the year with a PED suspension.

Even before their draft day splurge (which also netted them LSU receiver Terrace Marshall Jr. in the second round), Carolina brought Darnold to an offense that, at least on paper, was better than anything he had to work with in New York. In addition to McCaffrey and fellow former Jet Anderson, Darnold will also get to work with D.J. Moore (1,193 yards in 2020) and touchdown hawk David Moore (no relation).

It’s no secret that the Jets’ visit to Charlotte will be one of the most intriguing matchups of Week 1…if only because the court jesters of Twitter probably already have scheduled posts lauding Darnold and Anderson.

The Jets have proven to be one of the most exhausted sources of social media schadenfreude in football circles. That was ridiculously present throughout the course of the Darnold era. The discourse behind his mononucleosis diagnosis and supernatural encounterÂ probably would’ve died down in a week if it happened anywhere else in the NFL map…but, because it happened in a green uniform, it went viral.

Simply put, the Jets can’t go into Charlotte purely with the purpose of trying to show Darnold and Anderson (who has never let an opportunity to disparage the Jets go to waste) what they’re missing. They’re playing the Carolina Panthers, not the Carolina Ex-Jets.

The team would be wise to follow the example of general manager Joe Douglas. Ironically enough, no one in football was more complimentary toward Darnold than the man who pulled orchestrated his trip down south (notably scoring a second-round pick for a quarterback with a career 78.6 passer rating). Douglas has diplomatically addressed the trade, claiming that Darnold’s “best football is in front of him” but that the trade was in the best interest of both sides.

“Ultimately, we felt that wouldn’t be the best situation for Sam…for Coach Saleh and his staff, and for the locker room,” Douglas said, per team reporter Randy Lange. “We felt this was the best decision for the organization moving forward, hitting the reset button.”

To the Panthers’ credit, the team did not completely fall apart when McCaffrey was lost for the season, thanks in part to a career-best season from the Atlanta-bound Mike Davis. If disaster comes to Carolina again, it’ll likely come down to the talented Hubbard to pick up the slack.

But, if McCaffrey is truly back, he’ll undoubtedly be a front-runner for the Comeback Player of the Year Award. No one on the New York defense…heck, any defense on Carolina’s 2021 docket…needs to be told what he’s capable of at full strength.

In the midst of their woebegone 2020 season, the Jets’ run defense was a rare silver lining. Thanks to the breakouts of interior linemen Quinnen Williams, Foley Fatukasi, and John Franklin-Myers, the Jets’ run game ranked fourth in the AFC last season (12th overall in the league). They’ll have an instant opportunity to prove that last year was no fluke, especially when the offseason centered on bolstering the pass rush.

Will the Jets be able to show Darnold what he’s missing when they meet in September? Follow @GeoffJMags on Twitter @GeoffJMags and continue the conversation.Â 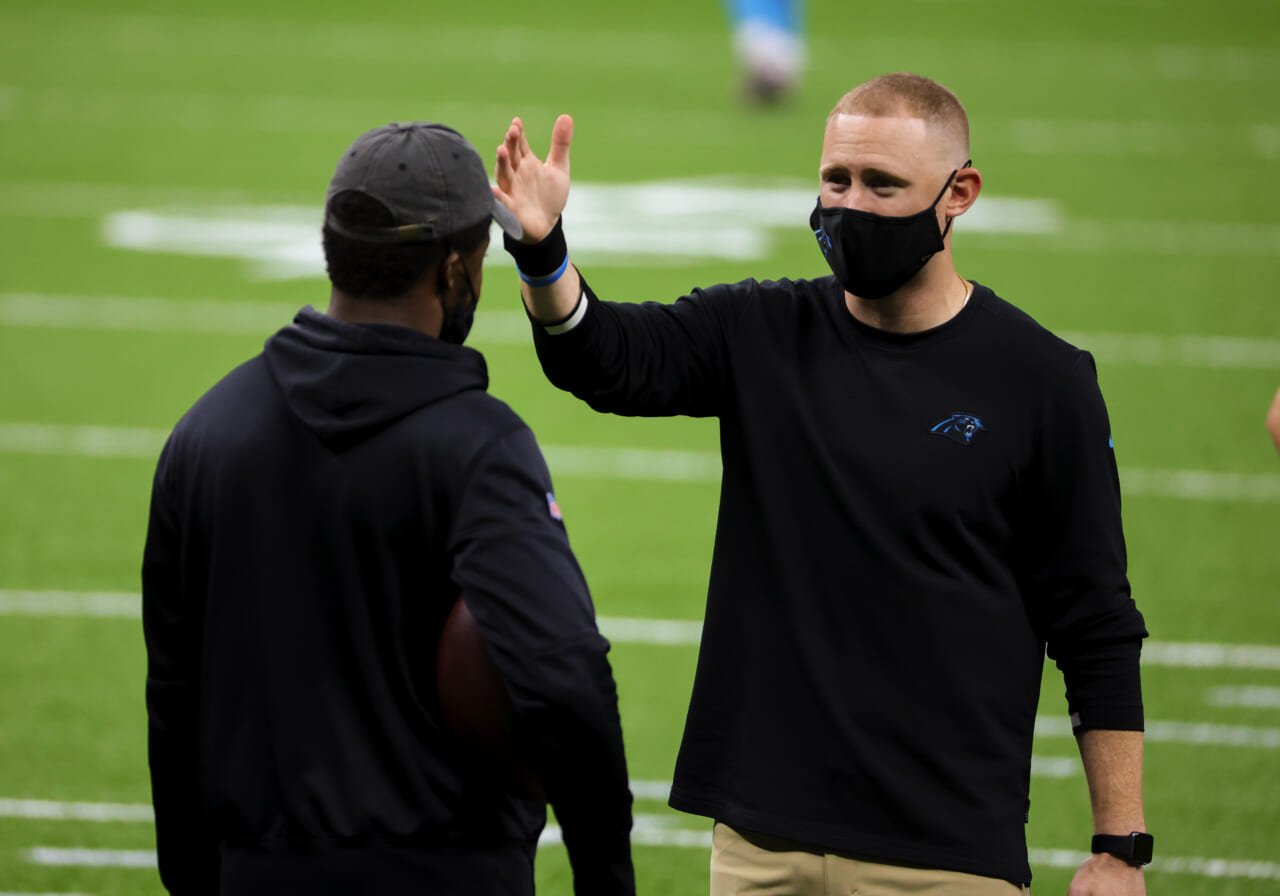 With the New York Jets now sitting at an 0-11 record with only five games to go, it is apparent the team needs a change of pace. That is likely to come in the form of a. Full-scale rebuild, starting with the coaching staff. As the team will likely move quickly with their coaching search, I decided to take an individual deep dive into some of the guys who could lead the New York Jets into the next era. This begins with Carolina Panthers Offensive Coordinator Joe Brady.

Joe Brady was born in 1989 in Miami Lakes, Florida. Brady played wide receiver in high school and earned an opportunity to play College Football at Willam & Mary. After a college playing career there, Brady begins his coaching career as a Linebackers coach before becoming a grad assistant at Penn State. Then, Brady got an opportunity of a lifetime to serve under Sean Payton as an Offensive Assistant. Payton saw a lot of potential with Brady, but when he took a gamble on heading to the college level under coach Ed Orgeron at LSU, Payton thought he was making a mistake.

The offense was so explosive that they were able to roll over competition on the way to their National Championship. Along with that, he was crucial in the development of now Bengals starting quarterback Joe Burrow. In Burrowâ€™s Heisman campaign, he had a 76.3 completion percentage that produced a line of 5,671 yds, 60 TDs, and 6 INTs. Not only was the passing attack spectacular, the rushing attack was spectacular. Clyde Edwards-Helaire ran for 1,414 yards and 16 scores, which only led him to be a first-rounder.

While on the topic of talent, I would be remiss without mentioning all the NFL Draft picks that came from last yearâ€™s offense and have excelled at the next level. Arguably the top rookie QB, RB, and WR are all LSU products. Now, this begged the question of how would Brady translate to the NFL, and he has answered that with emphatic success.

Joe Brady in the NFL

When Matt Rhule, a guy the Jets were heavily interested in before Adam Gase jumped from the college ranks to Carolina, he brought rising star Joe Brady with him. Brady has not disappointed. Brady inherited an offense ranked 27th in all of football in 2019 and has brought them to the 7th best offense in the NFL in only 10 games. With 6 games to go along with the impending return of Christian McCaffery, that ranking can only improve.

With McCaffery out, though, the offense has still hummed along perfectly fine. Guys like Curtis Samuel and Mike Davis have stood out in a big way, along with an impressive season from former Jets receiver Robby Anderson. The offense is innovative and unique, and the success he received at LSU has absolutely translated seamlessly to the next level. With a talent group that isnâ€™t even on par with what it could be, Brady has built a resume capable of being a head coach, and at 31 years old, he would be a fresh, innovative hire, but why the Jets?

Why would he be a good fit?

The Jets have tried everything in the past few years. Todd Bowles was a discipline heavy defensive coordinator who was supposed to carry over the hard work culture built under Rex Ryan. Bowles failed to get on the same page with the management and could not gain control over the locker room after a strong first season. Then the Jets hired Adam Gase. This was a hire that was not received well, but fans set out to give him the benefit of the doubt. He has been absolutely awful, and the coach who was supposed to bring a head coaching background has only brought incompetence.

Joe Brady would be the anti-Bowles/Gase hire. He is a fresh, innovative mind along the lines of Sean McVay and Kyle Shannahan and would immediately revitalize the franchise. Not only that, but with 98 million dollars in cap space, a renowned general manager in Joe Douglas, and a plethora of draft capital, the resources are there to build a competitive team that would work around Bradyâ€™s strengths. Not only that but pairing Trevor Lawerence and Joe Brady is the kind of tandem that excites everyone repping the Green and White.

Brady would be the best offensive-minded coach the Jets could grab, but is he a leader? Brady is 31 years old and inexperienced. If Brady can step up and show he is capable of being a leader in the interviews, he could be the easy favorite to be the coach. However, if he does not seem like a guy who could instill a winning culture in New York and mentor Trevor Lawerence, then maybe he is not the right hire. With that said, I firmly believe Brady deserves and should be the next head coach of the New York Jets.