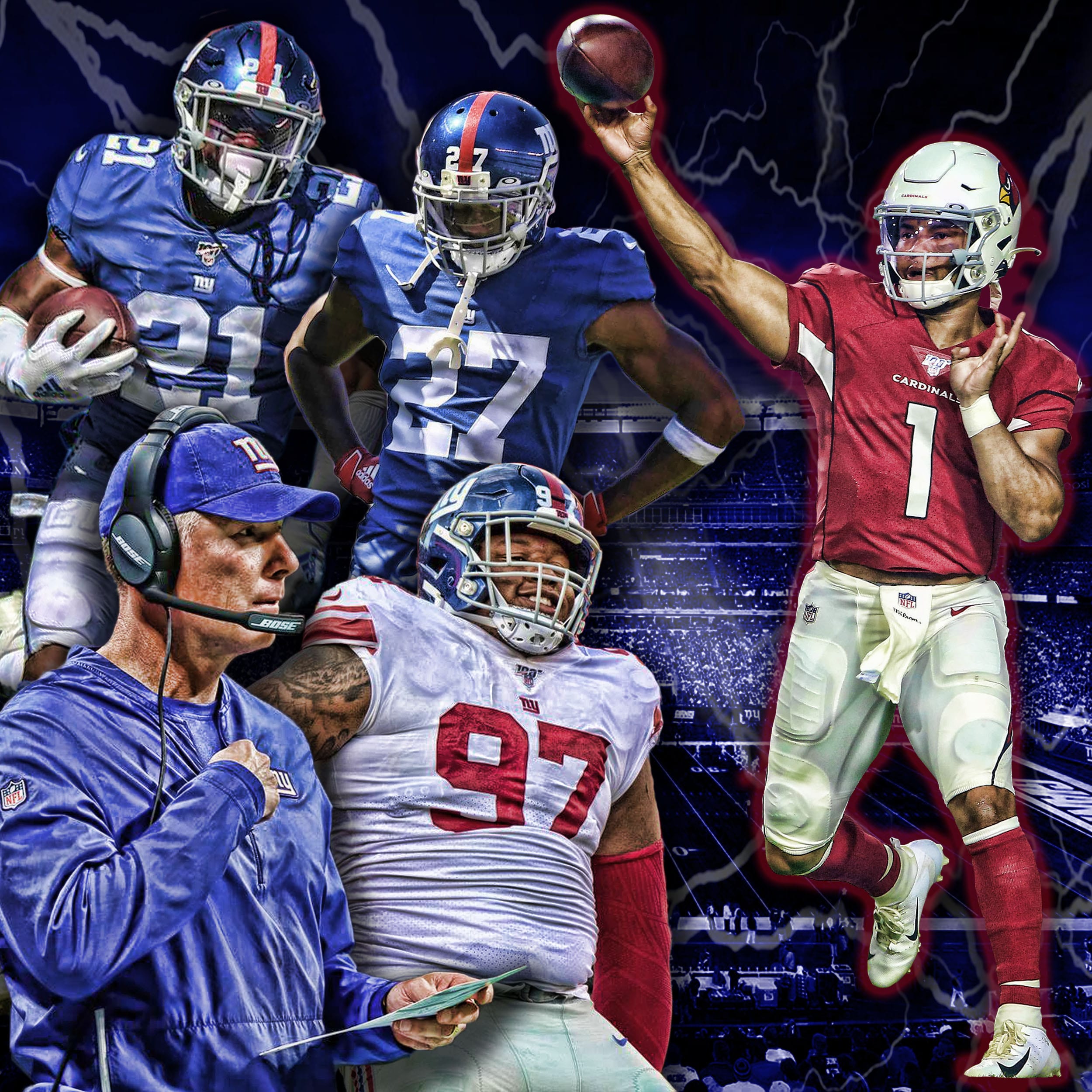 The New York Giants will host the Arizona Cardinals this Sunday in a week seven matchup at 1:00 p.m. The game will feature a duel between the 2019 NFL Draft’s first overall pick and sixth overall pick, both quarterbacks.

Daniel Jones will be trying to keep the Giants in the playoff hunt on Sunday, but it will really be up to his defense to contain Kyler Murray and help the Giants get this crucial win.

Kyler Is Tough To Catch

In week six, the Arizona Cardinals did not allow a single quarterback hit on Kyler Murray. Murray has only been sacked once in the last two weeks, but 20 times in the 4 games prior. Logically, the Cardinals have won their last two games when they have protected Murray. In those 4 games with 20 sacks, the Cardinals have lost three of them and tied one.

Kyler has really come into his own these last two weeks and has begun to look worthy of the first overall draft pick that the Cardinals selected him with. Kyler is one of the fastest quarterbacks to ever play in the NFL, even though he did not run at the NFL Combine, it was predicted that Murray would run a sub 4.4s forty-yard dash, possibly even sub 4.3s.

Kyler can be seen on this play putting his extreme speed and agility to work in the pocket, avoiding the sack, extending the play, and delivering a strike deep downfield:

Kyler Murray would be great at escape rooms 🤜🤛 @K1 pic.twitter.com/U2nmSmS1NE

Kyler Has A Plethora Of Weapons

The New York Giants’ defense has been struggling all season so far. The Giants’ secondary is arguably the worst in the league, ranking 31st in passing yards allowed. The Giants have let quarterbacks throw against them at will.

According to Pro Football Focus, there are 15 cornerbacks in the league who have allowed 300 or more yards on receptions as the primary coverage defender so far this season. The New York Giants have three of them — Deandre Baker (394), Janoris Jenkins (351) and Grant Haley (315).

This weekend, the Giants’ struggling secondary will be matched up with a strong receiver group. The Cardinals’ receivers are finally starting to create real chemistry with Kyler Murray.

Murray has been accurate as a rookie, completing 64.3% of his passes with 7.0 yards per attempt. He is throwing to the veteran legend Larry Fitzgerald and the young and talented Christian Kirk. So far, Larry has caught 35 passes for 427 yards and 2 touchdowns, being Murray’s primary receiver. Christian has yet to score a touchdown this season but has been playing a solid second receiver role with 24 catches for 242 yards. The Giants will also have to keep an eye on the Cardinals’ running back, too.

David Johnson is one of the best running backs in the NFL. After dealing with an injury in 2017 and the worst offense in the league in 2018, Johnson has finally returned to form in 2019. David is a dual-threat running back who has rushed the ball 76 times and caught 30 passes. Johnson has accumulated 613 total yards from scrimmage and 5 total touchdowns through six games.

The Giants’ defense is going to have its hands full, but it is coming off of an impressive performance against the New England Patriots. Things fell apart in the second half, but in the first half, the Giants forced the Patriots’ offense to turn the ball over three times and held their offense to only 14 points (since 7 of their 21 came off of the Giants’ special teams debacle).

The Giants’ defense will have their hands full against the explosive Cardinals offense. But luckily, they have some solid pass-rushers playing at a high level. Markus Golden has recorded at least a half-sack in each of the last five games and Dexter Lawrence is PFF’s highest-graded rookie defender of the season so far. Pressuring Kyler Murray and not giving him enough time to get the ball into the hands of his dynamic playmakers is the key to beating the Cardinals this week.