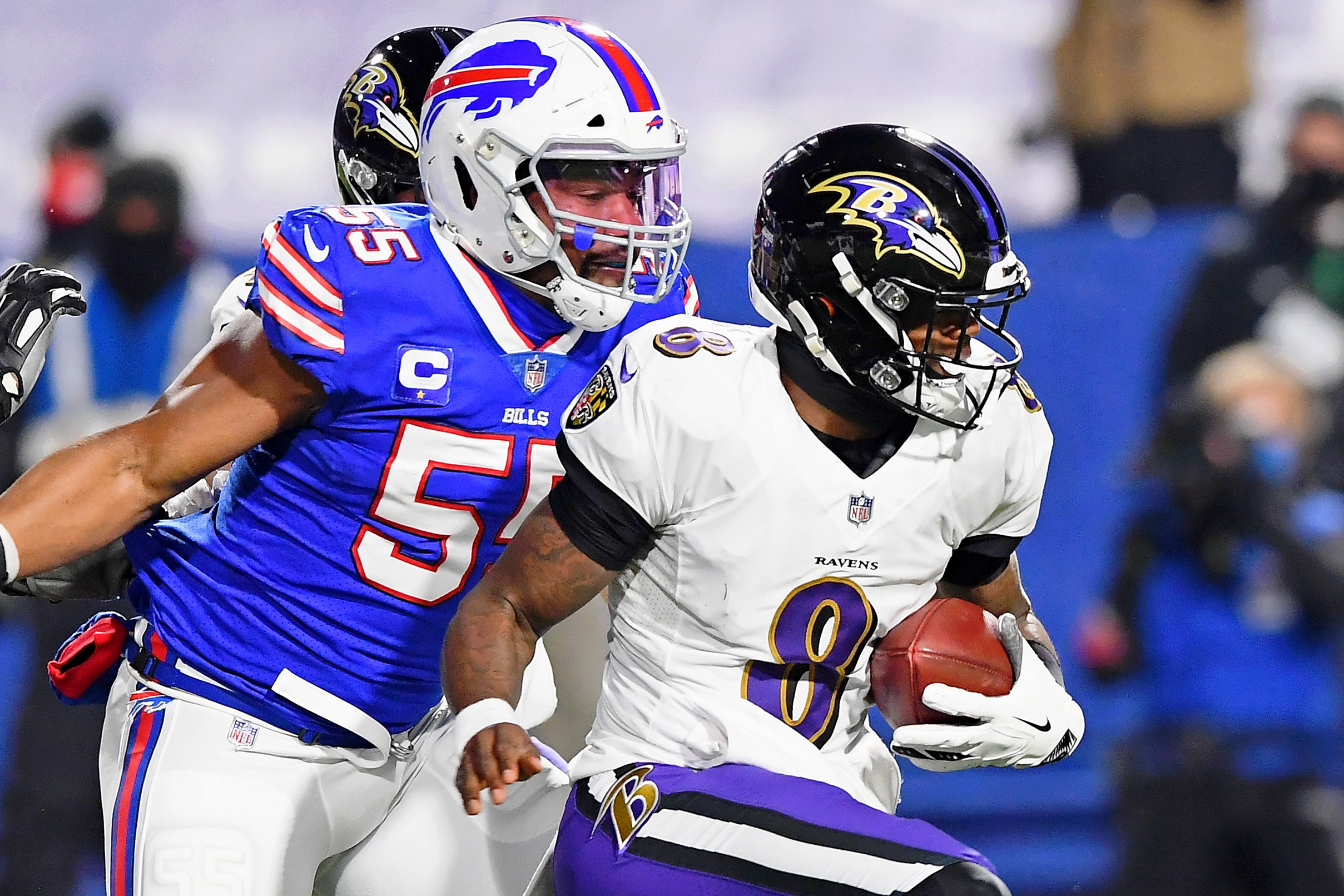 After a hard-fought battle with Lamar Jackson and the Ravens, Buffalo Bills fans came through in droves to support his charity.

The Buffalo Bills weren’t in a giving mood during the AFC Divisional playoffs, as they didn’t turn the ball over in their 17-3 win over the Baltimore Ravens. Their fanbase, on the other hand, was another story.

Shortly after Buffalo wrapped up their first visit to the AFC Championship Game since 1994, the base known as Bills Mafia came through in droves for Ravens quarterback Lamar Jackson. Bills supporters began donating to one of Jackson’s favorite charities, Louisville-based “Blessings in a Backpack”, many in increments of eight dollars, matching the number on Jackson’s Ravens jersey.

“Our donation box just started flooding with donations from Bills fans for Lamar,” Chief Marketing Officer Nikki Grizzle said in a report from Mike Reiss of ESPN. “It’s just been overwhelming, in the best possible way.”

Grizzle told Reiss that, as of Sunday afternoon, over $240,000 have come in for the charity since Saturday’s game. The collaborative gesture from Bills Mafia is an act of goodwill toward the injured Jackson, who left Saturday’s game early with a head injury. Jackson first became affiliating with the charity during his days at the University of Louisville and has remained active in its endeavors, routinely making monetary or memorabilia donations. Blessings in a Backpack’s mission statement is defined on their website as “(mobilizing) communities, individuals, and resources to provide food on the weekends for elementary school children across America who might otherwise go hungry”.

Bills Mafia, perhaps best known for their gameday antics, has become well knows for its philanthropy for both Buffalo representatives and their opponents in recent years. After the 2017 regular season finale, Bills fans donated over $415,000 to Andy Dalton’s personal foundation after the then-Cincinnati Bengals quarterback led a game-winning drive to defeat the Ravens, helping the Bills clinch their first playoff berth since the 1999-2000 season. The fans haven’t forgotten their own athletic heroes, famously coming through for quarterback Josh Allen through donations to the Oishei Children’s Hospital after the passing of his grandmother. Further information on donations to Blessings in a Backpack can be found here.

The Bills will continue their Super Bowl trek on Sunday evening, taking on the Kansas City Chiefs in the AFC Championship Game (6:40 p.m. ET, CBS). 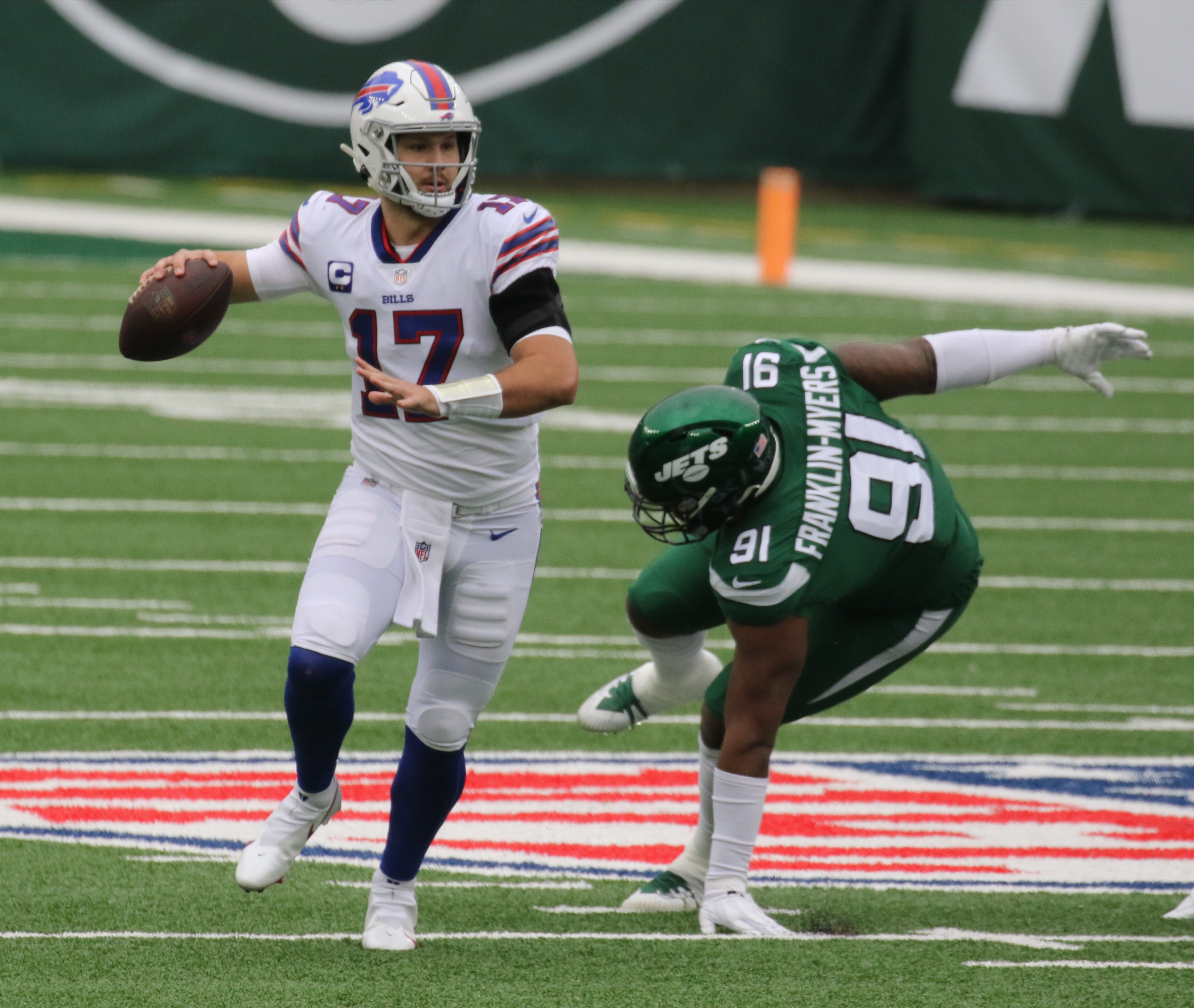 The hospital has carried on the string of good news brought forth by Buffalo Bills’ fans generous donations in the wake of a tragedy.

Even in a bye week, those associated with the Buffalo Bills have managed to come through in the clutch.

On Saturday, Oishei Children’s Hospital unveiled plans for further honoring the memory of the late Patricia Allen and the charitable efforts that followed her passing. The hospital announced that not only are they setting up a new fund in honor of Bills QB Josh Allen’s grandmother but they will also rename an area on the tenth floor the “Patricia Allen Pediatric Recovery Wing”. Artist renderings of the site promise to feature a photo of Josh Allen pointing skyward in memory of Patricia during the BIlls 44-34 win over Seattle on November 8. That game was staged less than 48 hours after the elder Allen’s passing.

According to a statement released by the hospital, the “Patricia Allen Fund” will “provide ongoing support to the pediatric critical care team at Oishei Children’s Hospital who provide life-saving care to pediatric patients”. The tenth floor is known for its sports theme, with Allen’s jersey framed alongside fellow Bills fan favorites like Jim Kelly and Thurman Thomas decorating the area.

“I am humbled by the incredible generosity that has poured in over the past several days in honor of my grandmother,” Allen said in the statement. “It means the world to me and my family and we are very grateful these donations will go toward helping save many lives for years to come.”

Upon learning of Patricia’s passing, Bills fans came out in supportive droves to donate to OCH, where Allen is a frequent visitor to the young patients. Bills fans donated nearly $700,000 to the hospital and their generosity will not go unnoticed. The tenth floor’s playroom will now be known as “The Buffalo Bills Fans Fun Zone”. It is located in the newly minted wing named after Patricia Allen.

“We really felt this was the perfect way to honor Patricia and recognize Bills fans for this incredible support of our hospital,” said OCH President Allegra C. Jaros, MBA said in the sam sentence. “With the wing being located on our sports floor which is already outfitted with lots of Bills and football memorabilia and graphics, we couldn’t think of a better place.”

Allen has been a major factor behind the Bills’ resurgence, guiding them to a 7-3 record as they’ve hit their open date. He has been responsible for 26 total touchdown this season, including a career-best 21 through the air. He and the Bills return to action next Sunday at home against the Los Angeles Chargers (1 p.m. ET, CBS). 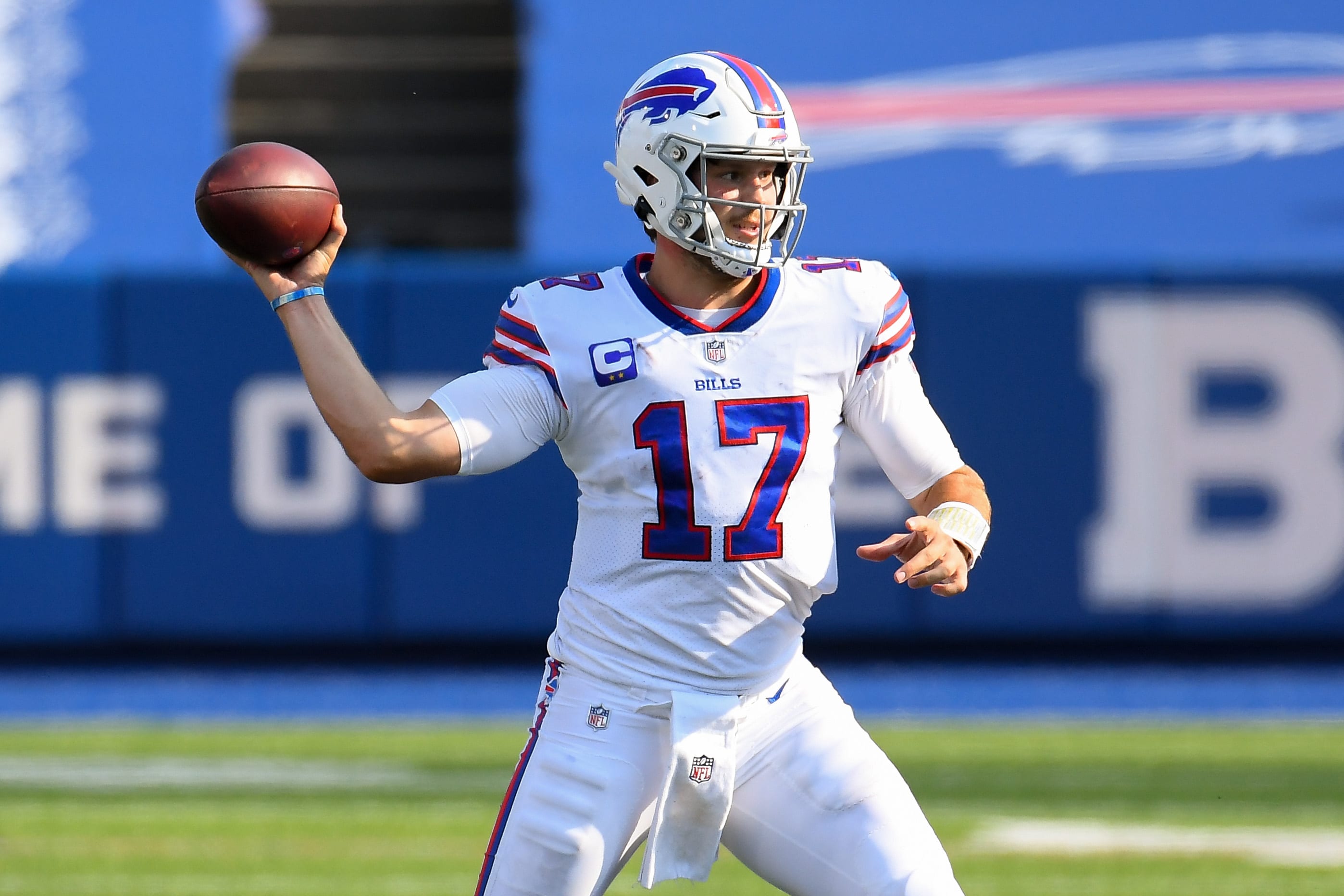 Buffalo Bills fans came through for Josh Allen after a big win on Sunday. Their contributions did not go unnoticed.

Josh Allen’s protection went far beyond his blockers on Sunday.

Hours after Allen learned after the passing of his grandmother Patricia, Allen guided his Buffalo Bills to a statement victory over the Seattle Seahawks, earning 415 passing yards and four total touchdowns in a 44-34 decision. The win over the NFC-leading Seahawks allowed the Bills to create their best nine-game start since their last AFC title season in 1993.

It was another tally, however, that truly made Allen smile. After the Bills’ historic triumph, Allen noticed an outpouring of donations to John R. Oishei Children’s Hospital, a Buffalo children’s hospital that Allen frequently visits. The tally was up to hundreds of thousands of dollars by the middle of the week, many contributions coming in increments of $17 in honor of the number worn on his Buffalo jersey.

Time will tell if such a prophecy comes to fruition, but the support was enough to convince Allen to become a Bill for life.

Allen opted to play in Sunday’s game because he felt it would be what Patricia, whom he affectionately referred to as “Grammy”, would want him to do. She was there for each of his high school games over at Firebaugh High School in California and Allen made sure she was at Bills Stadium in spirit, dedicating his performance to her memory. His showing was enough to earn AFC Offensive Player of the Week honors, doing so for the second time this season. He and Patrick Mahomes of Kansas City are the only players to win the award multiple times this season thus far.

Allen’s teammates and coaches alike made sure to support their quarterback before, during, and after the Seattle tilt.

“When he came in off the field in the locker room, he just kind of fell into my arms a little bit. A lot of emotion there,” offensive coordinator Brian Daboll said in a report from Matt Parrino of NewYorkUpstate.com. “I’d say particularly for him, but for me also. When you love somebody and something happens like that, it’s tough. Then to see it happen to someone that you really care about as a player, that’s tough.”

“He’s everything that you would ever want in a quarterback as far as leading a guy and leading his troops. You try not to let things in your personal life play a huge part in your football life because you don’t want it to throw you off,” Allen’s top receiver Stefon Diggs said in another writeup from Parrino. “He took a moment to put his feelings to the side and put his team first, and you gotta respect him. You gotta love him for that. Not a lot of guys could have done that.”

The support from Bills fans appears to par for the course in Western New York. At the end of the 2017 regular season, Bills fans raised nearly $500,000 for the respective charities of Andy Dalton and Tyler Boyd when the two Cincinnati Bengals’ game-winning scoring hookup defeated the Baltimore Ravens and allowed the Bills to clinch their first playoff berth in 17 seasons.

“Words can’t really describe how I feel, how my family feels,” Allen said in LaBarber’s statements. “Every time I call my parents and let them know the new number, they just start bawling all over again. To know that people care and that so much good is coming out of a tough situation, it means the world to myself, it means the world to my family.

“It just shows how this Bills community and this Buffalo community rally around each other. That’s what they’ve been known for and that’s what they’re still known for. … Everybody who supported and donated, I can’t thank them enough. I mean, it’s overwhelming, for sure. But so much good is coming out of…a tough situation that you can’t help but smile at it. It’s unbelievable.”

Allen and the Bills return to action on Sunday afternoon against the Arizona Cardinals (4:05 p.m. ET, CBS). 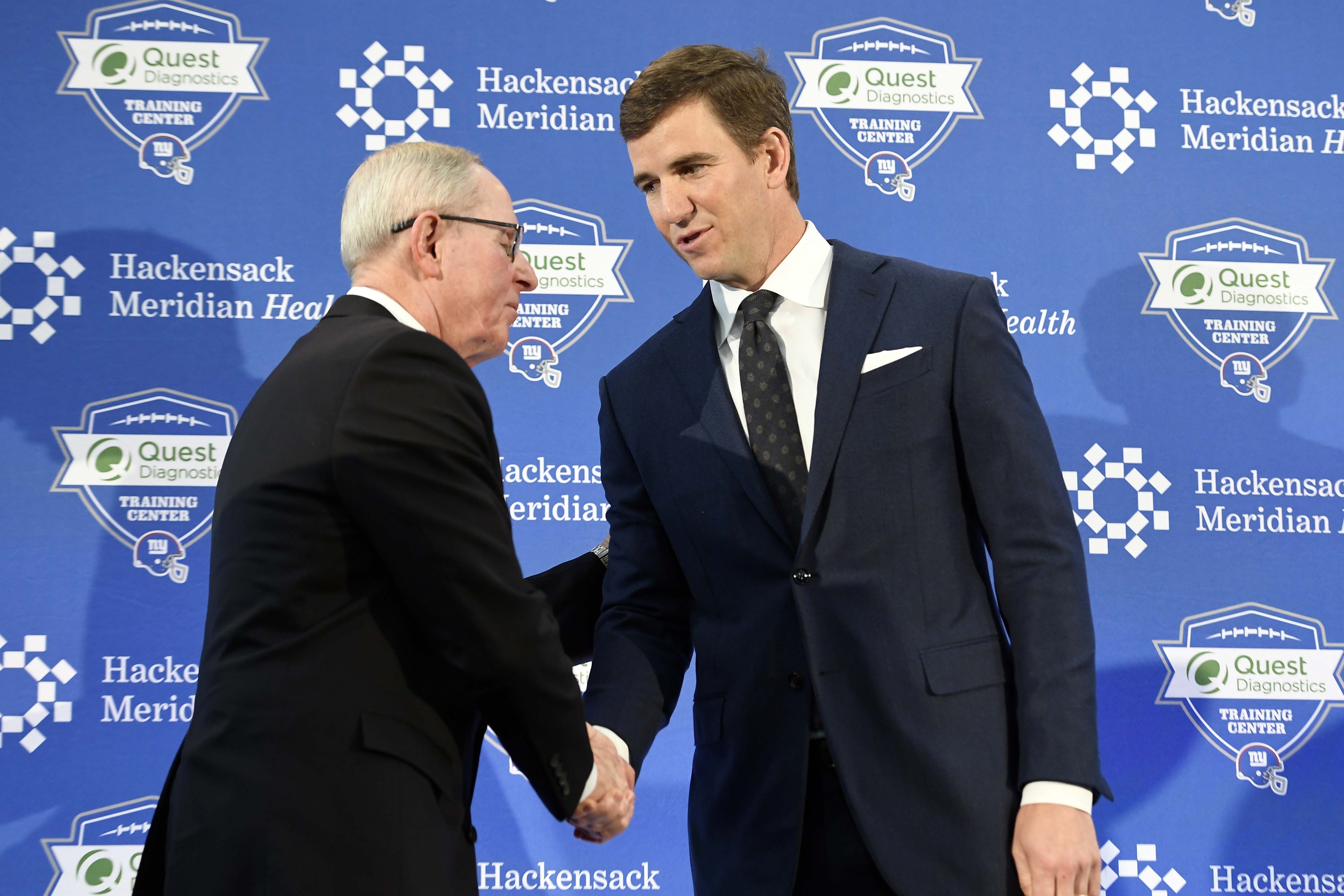 Eli Manning wrapped up a historic sixteen-year career with the New York Giants in 2020. The Giants legend led the team to two Super Bowl victories, earning the honors of Super Bowl MVP in both of the championship games. Manning, a fantastic philanthropist who works with numerous charitable foundations, will have another accomplishment to add to his list in 2020. Eli Manning will be inducted into the Tom Coughlin Jay Fund’s Champions for Children Hall of Fame.

It should not be news to anyone that Manning is a hard-working philanthropist. Eli is a winner of the NFL’s most prestigious off-field award, being named the 2016 Walter Payton Man of the Year (along with Larry Fitzgerald). NFL Commissioner Roger Goodell referred to the award as the NFL’s “highest honor.” According to Giants.com, “Manning was also named the Giants’ Man of the Year in 2007, 2008, 2011, 2012, 2014 and 2015. He was one of the three finalists for the Man of the Year award in 2015, when the award went to wide receiver Anquan Boldin.” Eli was the first player in the history of the New York Giants to win the award.

“Championing causes that involve children has always been a priority for Manning, and that goal has intensified now that he is the father of three young daughters.

Manning is a fervent champion for causes involving children. He has served as the Chair of the New York March for Babies for the past eight years, joining thousands of New Yorkers in the walk in support of March of Dimes. Providing additional access for top sponsors, engaging donors and raising awareness of the organization’s platform, Manning’s efforts with March for Babies helped raise more than $25 million over the past seven years.” – via Giants.com in 2017

Congratulations, Eli Manning, and thank you for all you do. You are a consistent role model at all times and your incredible work off the football field is what makes you the true legend that you are. Thank you for always being a class act and using your platform to fight for important causes.