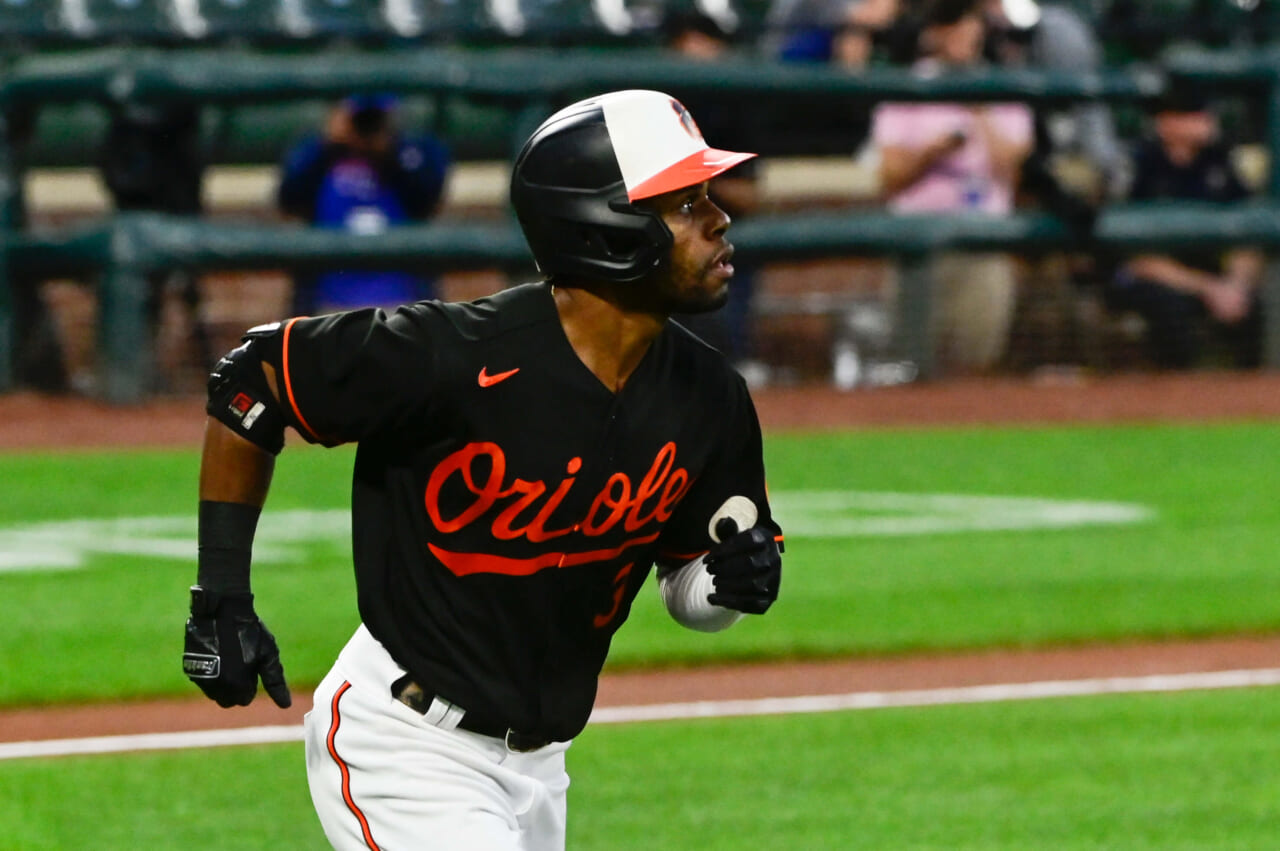 The New York Yankees rank 25th in MLB (out of 30 teams) with just 30 runs scored. Their offensive performance has been, for the lack of a better word, frustrating. The hitters are slashing .229/.311/.366 so far.

Former WFAN host Mike Francesa is dreaming about a specific player who, according to him, could jumpstart the Yankees offense: Baltimore Orioles Cedric Mullins.

Mullins, the only 30-30 hitter in the majors last year, hurt the Yankees with important hits over the weekend. He is a dynamic force at the top of the Orioles, and while he is yet to hit the ground running (he is slashing .167/.231/.361 with a 71), he already has two homers, a steal, and his customary great defense in center field to speak for himself.

Is Mullins to the Yankees possible?

On Saturday, Francesa tweeted the following: “If I could place a player, within reason, in the Yankee lineup. It would be Mullins in CF, batting leadoff. Perfect fit,” he said. And it really is a good fit: he plays center field and is a superb offensive player, even if he somewhat outperformed his peripherals last year.

A trade is possible, but extremely unlikely, though. Mullins is a piece to build around, as he has four years of cheap team control remaining, and Baltimore finally has some young studs that could come over to the bigs and start developing: Grayson Rodriguez, DL Hall, and catching prospect Adley Rutschman, not to mention useful players already in their big league roster, such as John Means, Ryan Mountcastle, Anthony Santander, and others.

For the Yankees to get the O’s attention, they would have to offer a huge package of prospects and assets, and so far, the Bombers have shown an unwillingness to discuss Anthony Volpe and Jasson Dominguez.

So, while Mullins is a good fit for the Yankees, he is highly unlikely to be deal to the Bronx. 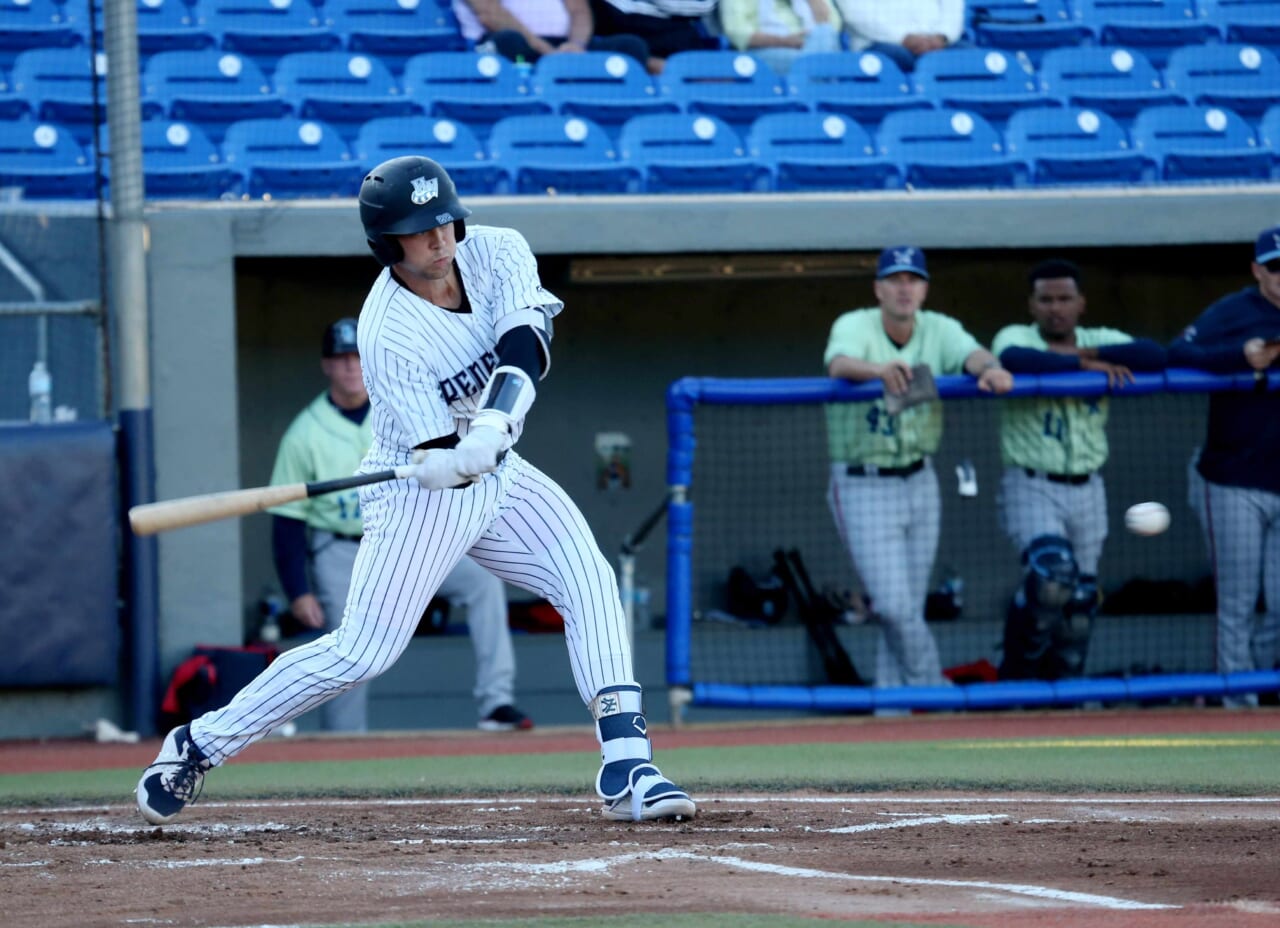 The New York Yankees made several moves to protect key prospects from the Rule 5 draft, but the bottom line is that they couldn’t protect all the players they might have wanted to, one of them is up and coming catcher Josh Breaux.

Losing a pivotal prospect to the Rule 5 draft can be serious, even devastating when they lose one to a division rival. Last season in the draft, they lost Garrett Whitlock, and that came back to haunt them in the season and Wild Card, that the Yankees lost to the Boston Red Sox. He became Bostonâ€™s best bullpen piece in 2021, posting a stellar 1.96 ERA in 46 regular-season appearances. Whitlockâ€™s dominance continued in the playoffs, with a 2.16 ERA in five appearances.

The 24-year-old Breaux was a second-round pick of the Yankees in the 2018 draft by the Yankees. Since then, he has been making a name for himself. Here is MLB Pipeline’s scouting report:

Breaux has a lofty ceiling but is a long ways from reaching it. His well-above-average bat speed and strength coupled with an extremely aggressive approach give him the raw pop to deliver 35 or more homers per season.

Breaux is enticing because he has well above-average raw power and an arm that was once clocked up to 100 mph when he took the mound. Other than that, he is very similar to catcher Gary Sanchez, both in build as well defensive and hitting skills. Due to his progression through the minors, the Yankees won’t want to lose Breaux.

Who will be non-tendered?

The Yankees have three players that may be considered to be non-tendered. Miguel Andujar, Luke Voit, and Gary Sanchez. The Yankees already have rid themselves of three other players that they believe have little returning value going forward. Clint Frazier, Tyler Wade, and Rougned Odor have already been shown the door through assignment.

Of the three, Miguel Andujar is the most likely to be non-tendered, as the Yankees really don’t have a place for him to play. After losing his job at third to Gio Urshela, the Yankees have tried him in the outfield and even at first base. Unfortunately for Andujar, he underperformed.

The Baseball Collective Bargaining Agreement deadline is this coming Wednesday, and the sides are still far apart. Commissioner Rob Manfred stated last week that a lockout is not out of the picture. It’s all about the money, how much the players get and how much the owners get to keep.

One of the most significant sticking points seems to revolve around young players being paid more and earlier than the previous agreement allowed. The owners have pretty much had their own way with the players in the last several agreements, and the players are determined to get the upper hand this time.

If you browse social media, Yankee fans are getting very frustrated with Brian Cashman seemingly sitting on his hands as other clubs are making moves to improve their teams, some of them big splashes.

What is most concerning to fans is that the cross-town New York Mets went on a Black Friday spending spree. The Mets’ new GM, Billy Eppler, picked up infielder and switch hitter Eduardo Escobar to a two-year deal reportedly worth $20 million, according to MLB Network. They signed first baseman and outfielder Mark Canha to a two-year deal worth $26.5 million, according to the New York Post. And late Friday night, they agreed to a four-year deal with outfielder Starling Marte knocking him out as a Yankee target at center.

Centerfield is still a question, Taylor or Buxton?

With Brett Gardner gone, at least for the moment, and the question looming, can Aaron Hicks remain healthy? Centerfield remains an area to be addressed.

Hicks, with the Yankees for six years, has only played in 100 or more games in two of those years. Last season was dreadful, with him only playing a few months due to a wrist injury and surgery, demonstrating the need for some solid backup in center.

The Yankees have reserves, but with the loss of Gardner,Â  Greg Allen, and Tim Locastro, it only leaves Joey Gallo and Aaron Judge to back up Hicks. Both of them are much better performers at the corners. Chris Taylor has often been mentioned, but in the trade market, the Yankees could go after Byron Buxton of the Twins. Possibly not a priority, but the Yankees clearly need help.

Buxton is an intriguing fit at center. His defense is not in question. This season, the dynamic, two-way center fielder hit .306/.358/.647 with 19 home runs, 50 runs, 32 RBI, and nine steals in just 254 plate appearances. Add to that his contact hitting from both sides of the plate, and the Yankees have the perfect fit if they want to trade for a quality centerfielder.

In other news of interest

After the 2021 season, the Yankees fired third base coach Phil Nevin. In one of the few moves the Yankees have made, they replaced him with ex-Mets manager Luis Rojas. The Los Angeles Angels have since hired Nevin as their new third-base coach replacing Brian Butterfield.

If the New York Yankees are still interested in superstar Carlos Correa, they will have to fight for him, as the Detroit Tigers seem to have the edge on procuring his services.Â  It would also match up Correa with his old cheating scandal manager A.J. Hinch.

The New York Yankees are keying in on several free-agent players but don’t rule out a blockbuster trade to bolster a spot of weakness on the roster. With GM Brian Cashman and the coaching staff electing to release Clint Frazier, the Bombers need to begin thinking about a solution in the outfield, especially with Aaron Hicks proving to be a liability.

With Starling Marte signing with the Mets on Friday in their big Black Friday spending spree, the Yanks are waiting patiently for the right opportunity to arise. That opportunity may have just presented itself, as All-Star outfielder Cedric Mullins is reportedly being placed on the market by the Baltimore Orioles.

According to Jon Heyman of MLB Network, the Yankees are one of several teams in pursuit of Baltimore Orioles star outfielder Cedric Mullins:

Word has gotten out that the Orioles would listen on star CF Cedric Mullins, and teams are lining up to give it a shot knowing itâ€™s a long shot. Asking price is understandably extremely high. All these teams (and more) could use a CF: Philly, Rangers, Astros, Giants, Mets, Yanks.

Mullins is coming off his best season yet, hitting .291, 30 homers, and 53 RBIs this past season. Mullins posted an offensive master-class, but a lone season of production should scare off potential suitors who may be looking for a bigger sample size of numbers to work off of.
The Orioles’ young stud posted an 18.9% strikeout rate and 8.3% walk rate, sufficient numbers that showcase patience at the plate and discipline. At 27-years-old, Mullins has years left on his deal before he becomes a free agent in 2026. Defensively, Mullins played 1264 innings this past season in center-field, logging a .985 fielding percentage with 6 errors. If he can make gradual improvements as a defensive player, he could develop into an elite balanced outfielder.
Natural regression could impact his performance in the future, but given his price tag will be so cheap, a team can continue to develop his talents, and if he pans out, they’ll have one of the best up-and-coming outfielders in baseball reaching his prime.
According to Steamer projections, Mullins will hit .259 with 25 homers and 74 RBIs in 2022, a solid state-line — better than most Yankee players this past year. A potential deal for Cedric would have to include several top-end prospects, which may be worth it for a proven player with an upward trajectory.