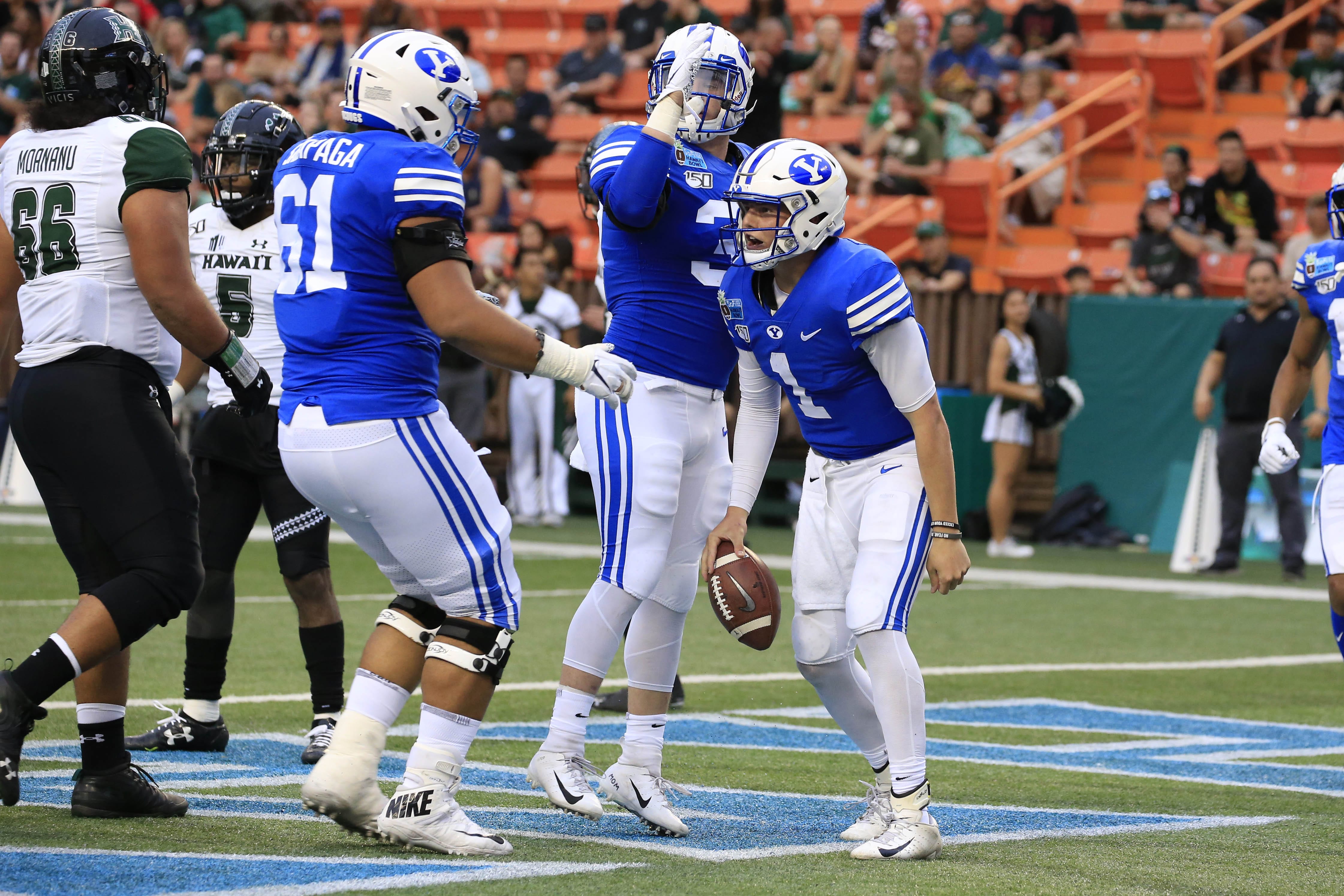 The New York Jets are likely set to take a quarterback with the No. 2 pick this month. Adding one of his teammates could work wonders.

For the New York Jets, the easy part ends on draft day.

With the trade of Sam Darnold, it’s all but assured that Gang Green and general manager Joe Douglas will choose a quarterback with the second overall pick of April 29’s NFL Draft proceedings. But then comes the dirty work: grooming him and developing him into a reliable franchise man.

That’s something the Jets have had major trouble with. Their quarterback problems have been well-documented, the franchise slot changing hands more often than the roundball at a New York Knicks game. Darnold joins a list of endless false saviors, a list grown through injuries (Chad Pennington), age (Brett Favre), or simply general inconsistency (too many examples to list). It’s great that Douglas has yielded an embarrassment of draft riches, but he knows that it’s imperative that the right choices are made in those slots.

“We have a lot of opportunity in front of us, 21 picks in the next two drafts, including 10 in the first 3 rounds,” Douglas said of the Jets’ draft future, per notes from the team. “But with that opportunity, we know we have to make the most of it and hit on these picks.”

One way the Jets can smooth out the transition to a new quarterback is to perhaps find some of his teammates, familiar faces in a strange new locale. Though the general consensus appears that the Jets will choose Zach Wilson with their top pick, ESM goes over some of the top throwers and their alma maters to find perfect matches…

If they draft Zach Wilson from BYU

BYU’s offensive fireworks were allowed to commence thanks to stellar protection. Three of their starting blockers, including Christensen, Chandon Herring, and Tristan Hodge, each opted for early entry. Christensen, a consensus 2020 All-American, worked primarily as a left tackle, a spot the Jets did fill in reasonably well with Mekhi Becton, but has been complemented for a strong football IQ that could allow him to make the shift to right. If the Jets don’t address their blocking woes with their extra first-rounder, Christensen could be worth looking into during the Friday session.

Adding Bushman, whose 2020 was washed away after an injury, would not only put some hit on the current crop of tight ends (namely starter Chris Herndon) but provided a familiar target for Wilson. Their last collaboration came in the Hawaii Bowl on Christmas Eve 2019, uniting for 91 yards on six hook-ups. Though lack of his speed and aggressiveness has attracted criticism, Bushman could wind up becoming a serviceable day three find, be it through the draft or free agency afterward.

Wilson’s favorite 2020 target was Milne by far, a finalist for the Burlsworth Trophy (awarded to the nation’s most outstanding walk-on). Milne burst onto the scene with a stellar junior year, respectively ranking seventh and fourth in FBS play with 70 receptions for 1,188 yards. He probably would’ve been better off with an extra year in Provo, but a friendly face could help Wilson learn the offense more quickly, which could prove vital in a shortened preseason (down to three exhibitions after the addition of a 17th regular season game).

If they draft Justin Fields from Ohio State

Another unanimous All-American (in a season he nearly missed out on, originally declaring for the 2020 draft before the Big Ten opted-in to football antics), Davis should be a target for the Jets at Nos. 23 or 34 whether they draft Fields or not. No matter which thrower the Jets draft at No. 2, he’s going to need protection. A dominant, smart mind like Davis, who brings forth a lot of upside, can help that transition. Davis knows what it’s like to be called upon in unusual situations. His Big Ten debut came in the conference’s 2019 title game and he later partook in the ensuing Rose Bowl win over Washington over his first two collegiate starts.

In the rare cases that Fields struggled, perhaps the most notable instance coming in December’s conference title game, Sermon had his back. The rusher surged up draft boards during the collegiate postseason, torching Northwestern for a jaw-dropping 331 yards before earning 193 in the Sugar Bowl upset win over Clemson. If the Jets draft Fields, they could look to create some further heat in their running back room, joining fellow young projects like La’mical Perine, Ty Johnson, and Josh Adams.

If they draft Mac Jones from Alabama

One (of many) thing(s) Sam Darnold was never blessed with in New York was a truly reliable center, often working veteran castaways from elsewhere (I.e. Spencer Long/Jonotthan Harrison). Should the Jets go with the surging Jones (ranked third to San Francisco in Mel Kiper’s latest mock), Dickerson can help him avoid such a conundrum while putting some heat on incumbent Connor McGovern. He hauls a sizable trophy case to his professional destination, including the Rimington Trophy as the best center in college football.

While the Crimson Tide’s skill players may be gone by the time the Jets are on the clock, they have valuable blocking assets that Jones or another can work with. Known for his power and strong run blocking, Brown might have to wait until day three due to length issues and mobility. But he has been know to open holes for the Crimson Tide’s run game and earned rave reviews for his in-line blocking, which would make him invaluable as a goal-line escort.

If they draft Trey Lance from North Dakota State

Don’t let the small-school nominee Radunz get lost in a tackle noticeably sized in talent. Radunz got an opportunity to impress amongst elite talent at Mobile’s Senior Bowl. Some scouts have questioned his work ethic, though having a steady leader like Lance to potentially help him out could prove to be grounding. His strength and initial burst have earned positive reviews, and his raw power and talent could propel him to day two status. 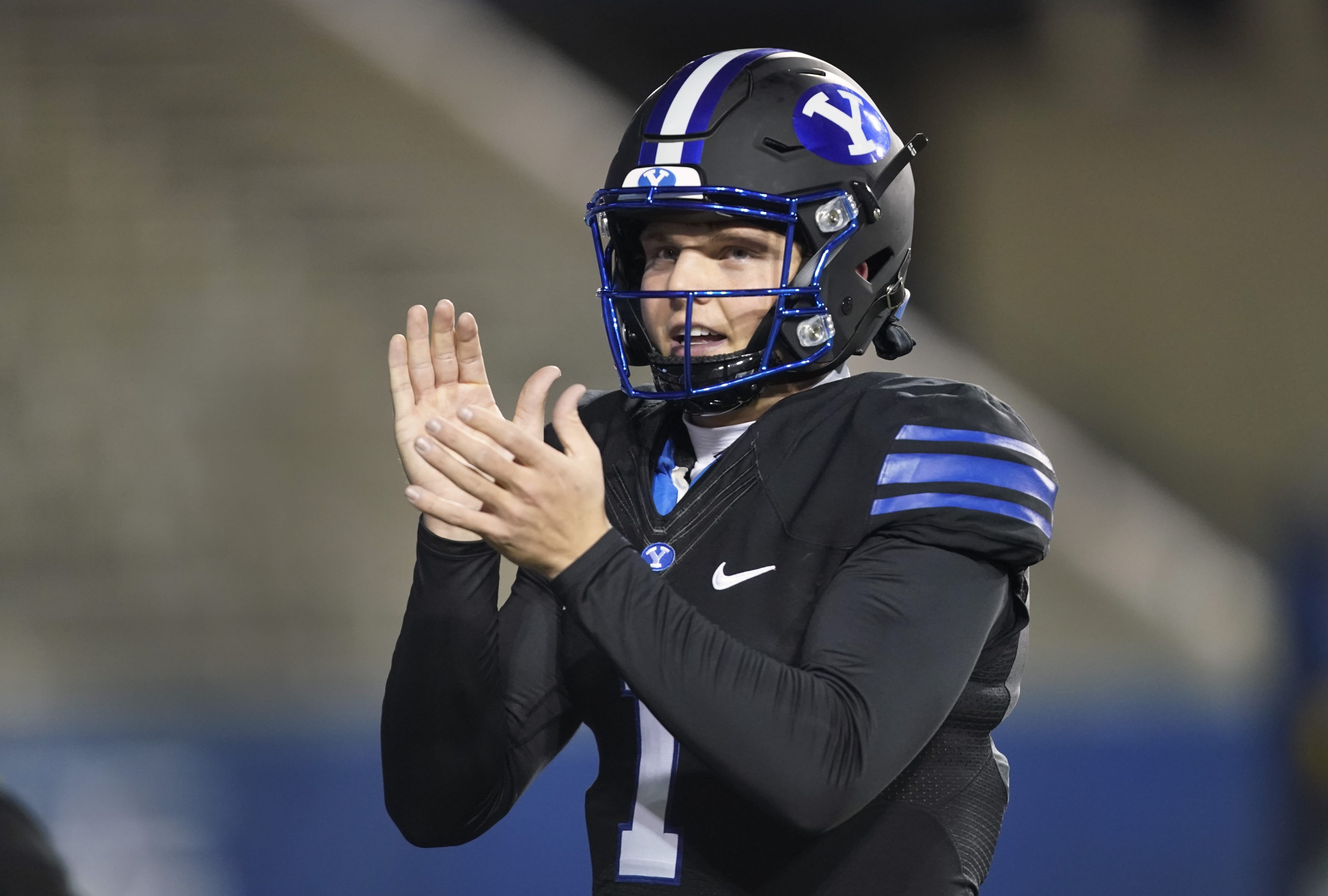 Just a few days ago, the world saw BYU QB Zach Wilson produce one of the most memorable pro days in the past decade. Wilson caught the eye of so many that he’s viewed as a virtual lock to the New York Jets. Wilson’s performance may have booked him a ticket to MetLife for some, but others were less than enthused about his performance in shorts and drew comparisons to Sam Darnold’s past performances. The reality is that although Wilson is unproven, sometimes it’s better to take a shot at contention than aspire to toil in mediocrity. That shot is trading Sam Darnold and selecting Zach Wilson.

The case for trading Darnold goes beyond just the bad outweighing the good; since the day Darnold came out of USC, there has always been concern about his turnovers and decision making.

In two seasons as the quarterback for the Trojans, Darnold had 57 TDs to 22 INTs. Darnold also had a completion percentage of 64.9% in college, which is above average, but not a number that jumps off the page. For comparison, Zach Wilson had 56 TDs to 15 INTs. Not only that, but his completion percentage was over 3% greater than Darnold.

The eye-opening season that vaulted Wilson above Darnold in these categories was last season. After spending his offseason with John Beck, Wilson saw a jump from around a 64% completion percentage in his first two seasons to 73.5% last season. He also saw his interceptions drop from 9 in the season before to 3. Not to mention his pass attempts went up by over 25, his yards per attempt went up by nearly 4 yards and his touchdowns went up by an astronomical 22 touchdowns. Wilson refined his game and had a jump on par with that of Joe Burrow. Wilson’s decision-making is evidently better than Darnold’s was at this point, and there is an argument to be made Wilson has grossly exceeded where Darnold was when he came out of college.

It has been beaten to death how bad of a supporting cast he had, and that is true. I legitimately cannot think of a worse offensive line or wide receiver room than the Jets trotted out last season. Not to mention the utter incompetence of head coach. Darnold has not had help, and he has not seen any legitimate progression to this point. Sam Darnold is capable of making throws like Zach Wilson, and he has proven it, but Darnold has not developed, and with a new head coach, new offense, and a new future for the Jets, it may be best for parties to separate. It’s an unfortunate reality that, once again, a Jets quarterback has not worked out, but Darnold has not developed enough to earn the keys to the kingdom, and Wilson at least gives the Jets a chance to start fresh and the front office personnel a chance to take their guy.