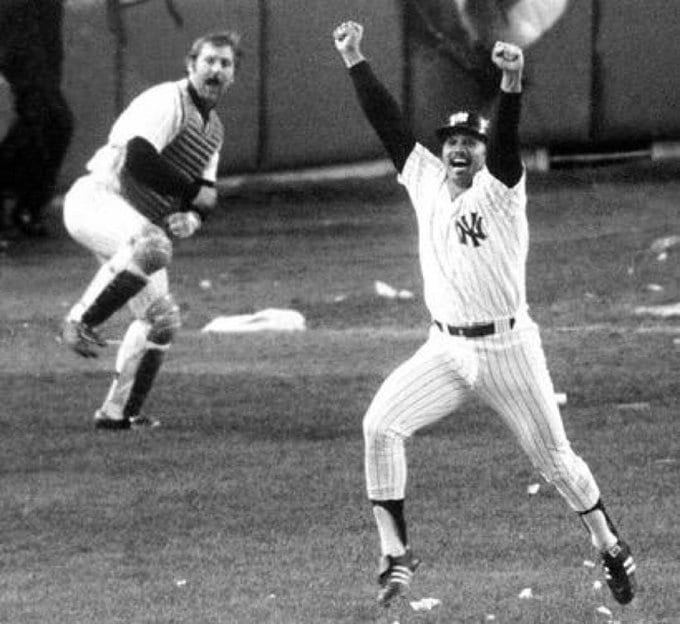 The New York Yankees are the winningest baseball team with the most World Championships in all sports with 27. In baseball, part of winning is hitting home runs, and the Yankees have hit plenty. Today we look at my selection for the ten most influential home runs in Yankee history. This is part of my Top 10 series that covers everything in Yankee baseball, from the best seasons to the best outfielders and more.

10. Bucky Dent gives the Yankees the lead over the Red Sox

In 1978, Bucky Dent and Ron Guidry stepped up to lead the Yankees past the Red Sox and into the playoffs. One measly game at Fenway Park determined whether Dent and the 1978 Yankees would continue their season. That time it wasn’t a playoff game, but rather a 163rd regular-season game as a tiebreaker made necessary. Dent’s seventh-inning, two-out, three-run homer off Mike Torrez sealed the deal for the Yankees, and they advanced to the postseason. The Yankees won that series four games to two over the Los Angeles Dodgers.

9. Did Babe Ruth call that shot?

Number 9 is controversial as to this date no one knows if Babe Ruth really called that home run. The “Bambino” supposedly pointed to the center-field fence at Wrigley Field in Game 3 of the 1932 World Series, calling that he would hit a home run to center field, much to the joy of Yankee fans, he did just that. In a recently uncovered audio from Lou Gehrig, he seems to agree that he did, in fact, point out that he would hit a home run.

On May 22, 1963, it was looking like another Yankees romp over the Kansas City Athletics as they led by the score of 7-0 going into the eighth inning. Much to the chagrin of Yankees fans, the Athletics hit seven unanswered runs in the ninth inning, tying up the game. The tie remained until the bottom of the eleventh inning when Mickey Mantle took to the plate. Bill Fisher on the mound, Mantle swung so hard at his first pitch he fell to the ground. Fischer then tried to sneak a fastball by him, and Mickey unleashed a powerful blast at just the precise moment, with his bat speed at its maximum, the ball was hit off the sweet spot of Mantle’s bat, the ball looked as if would be the first ball ever to exit Yankee Stadium, but it hit the third tier facade 370? from home plate and 118? Off the ground for game-winning, walk-off home run.

My number six and another baseball first and first for the Yankees. Roger Maris exceeded Babe Ruth’s home run record with 61 home runs. During 1961 it was a season for the M&M boys as Maris and Mickey Mantle raced to have the most home runs of the season. Mantle came close, but injuries at the end of the season allowed Maris to pass him. Maris hit 61, and Mantle hit 53 long balls.

The Yankees faced the Los Angeles Dodgers in the 1977 World Series. New York headed back to the Bronx for Game 6 with a 3-2 lead. Jackson had caught fire, clobbering home runs in Game 4 and Game 5. He was as hot as ever. Jackson would give the Yankees the lead with a big bomb in the fourth inning. He would hit another home run in the fifth inning to right field. Then in the eighth inning Jackson the show off he was strutted to the plate and hit his third home run of the game, a blast that seemingly never landed. The Yankees won the World Series four games to two. After the game, in an interview with catcher Thurman Munson, the told reports ask Mr. October, the rest is history.

4. Jim Leyritz kicks off a dynasty

On Oct. 23, 1996, the Yankees had not won a World Series since 1978. On that day up stepped a backup catcher named Jim Leyritz, with just a stick for Mark Wohlers’ nuclear fastball. He hung the slider. And Leyritz hammered it out of the Atlanta Braves park. The Yankees won the World Series and would go on to win four in just five years. It is said that Leyritz fueled that dynasty.

3. Chris Chambliss struggles to get to home plate

On a cold New York Yankees autumn night on October 14, 1976, the fifth game of a winner take all ALCS game, the game would be at a standstill in the bottom of the ninth. Kansas City relief pitcher Mark Littell would be taking warm-up tosses, Yankee public address announcer Bob Sheppard was cautioning the crowd of over 58,000 about throwing debris onto the playing field. The game had already been stopped several times for bottles, firecrackers, beer cans, and rolls of toilet paper being thrown from the stands.

Meanwhile, Yankee first baseman Chris Chambliss waited in the cold. The delay prevented Littell from staying loose and interfered with his rhythm. Finally, at 11:13 PM, Chambliss stepped into the batterâ€™s box, and home-plate umpire Art Frantz yelled, “Play ball” Littell would throw Chris a high fastball that Chambliss would smash over the right-field wall for a walk-off win and one of the most iconic moments in baseball history, as the Yankee fans emptied the stands and filled the fields.

Aaron Boone is the present Yankees field manager, but he was not unknown to Yankee fans before he took the managerial job. In 2003 the Yankees met the Red Sox in the ALCS. In the American League Championship Series, the Yankees and Boston Red Sox were tied, 3-3. Boston hasn’t won a World Series since 1918, still plagued by the Curse of the Bambino. Red Sox fans were ready for a game 7 win ending the drought. Aaron Boone had other ideas. The game was tied at five into the eleventh inning. Boone stepped to the plate with Tim Wakefield on the mount. Wakefield offered Boone a floater that Boone sent just inside the left-field foul pole, and the Yankees advanced to the World Series that they lost to the then Florida Marlins 4 games to 2.

Babe Ruth made a lot of money for the New York Yankees allowing them to move out of the Polo Grounds and build their own stadium in the Bronx. As if a forerunner for the Yankees 27 World Championships, Babe Ruth hit a home run in his second at-bat on the opening day of the new stadium. It was April 18, 1923. The Yankees gave the official attendance that day as 74,200 but later amended that number to 62,200. Ruth with his second opportunity of the day to deliver the desired blow. He fouled off Red Sox pitcher Howard Ehmke’s first pitch, took a ball, hit another pitch foul, and watched ball two go by. Then Ehmke left a letter-high curveball over the plate that Ruth ripped several rows up into the bleachers for a three-run blast that gave the Yankees a 4-0 lead. This is just one more reason that Yankee Stadium was called the “House that Ruth built.”

Honorable mentions: Bobby Mercer on the day that Yankee great Thurman Munson (1979) was put to rest, Mercer homers for the Yankee win and his passed best friend. Lou Gehrig had a four-homer game on June 3, 1932.