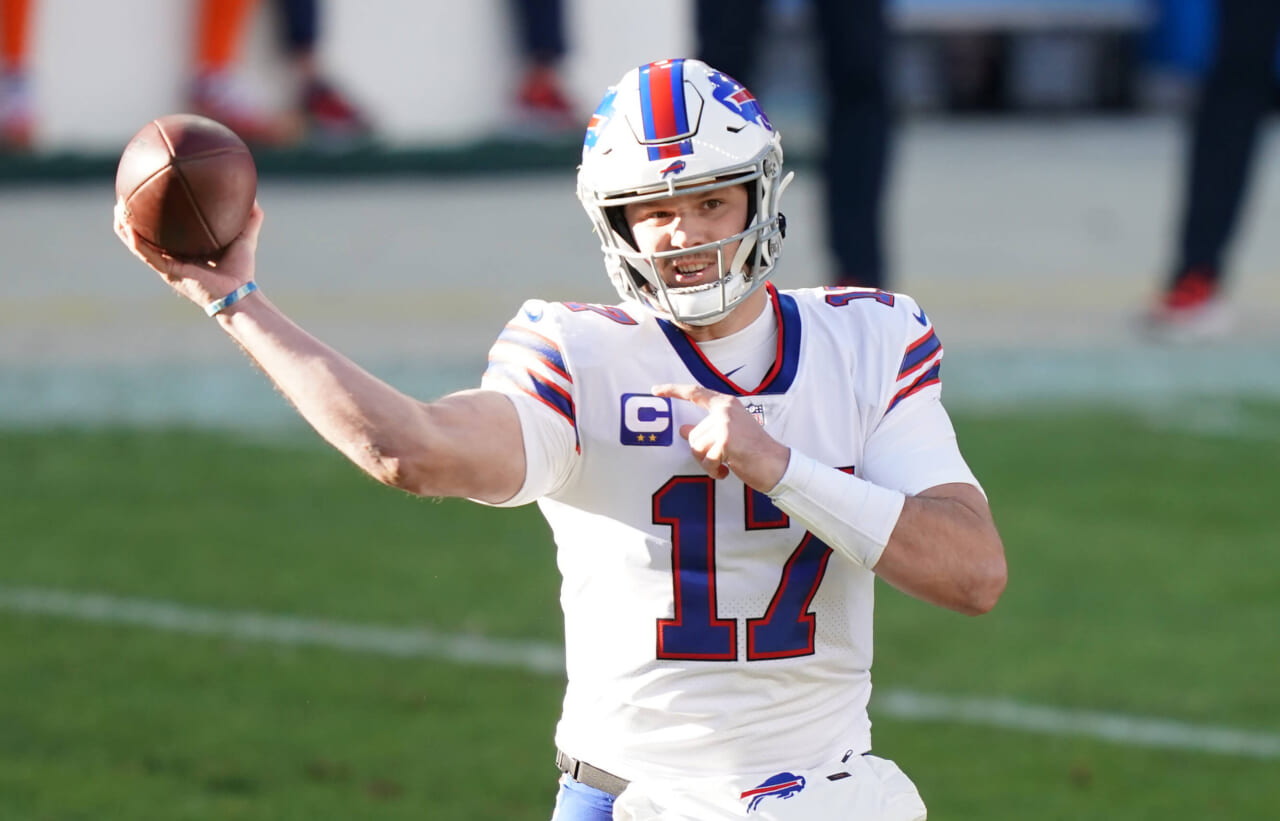 Ever since he stepped into the league in 2018, Buffalo Bills quarterback Josh Allen has progressively developed into a site to behold. In only his third season in the NFL, Allen put together a spectacular breakout performance as he not only threw for a career-high 4,544 yards and 37 touchdowns but, in the process, led the Bills to their first AFC Championship game in decades. Despite falling short to Patrick Mahomes and his Chiefs in the playoffs, what Allen was able to achieve with this team, was nothing short of incredible, providing a spark of hope that Bills fans have been craving for so long.

However, what’s quite unique with Allen’s rise to stardom is that since his rookie season, he’s yet to have any setbacks in his ascent to prominence, more or less, an off-year.

To clarify, even players of his caliber in talent sometimes fall short of the statistical brilliance they’ve achieved in previous seasons. Whether it’s due to injuries, immense pressure, a struggling support system, or something else entirely, this phenomenon has become a commonality in the league that usually takes place during the second year of most breakout stars that shine in their rookie seasons (aka The Sophomore Slump). We’ve seen this with guys like Todd Gurley, Sam Bradford, Mike Williams, Baker Mayfield, and Cam Newton to name a few.

That being said, these declines (whether small or large) don’t always take place during the sophomore year for all NFL players and stars alike. In fact, some of the biggest names in football, including Mahomes, Lamar Jackson, Russell Wilson, and Jared Goff, all have experienced significant drops statistically following big breakout years in their careers, with many of these lowered outcomes taking place after their second seasons. And despite his young three-year career so far and an immaculate third season in the league, Allen has yet to have that kind of step-back experience. And it’s hard not to wonder if this slide will come around this year, particularly with the added pressure of making a trip to the Super Bowl.

But what makes this season even more challenging for Allen is the expectation and requirement to produce another flawless season that, at the very least, closely matches the one he produced last year. And this includes limiting turnovers significantly, which has been an issue for Allen since he got drafted. Though he posted a career-low in rushing fumbles last year with only 4, Allen had an additional 5 passing fumbles along with 10 interceptions, illustrating just how vital it is of him to limit turnovers this year both on the ground and through the air (ESPN). Anything short of his last season numbers could certainly jeopardize the Bills’ aspirations for a Super Bowl ring, and that’s another layer of pressure that might be too difficult to surmount.

Nonetheless, Allen has proven that he is no ordinary quarterback and has predicated the brunt of his success on one key component: growth. From season to season, Allen has made grand strides with his development by not only refining his mobility in and out of the pocket but also by improving his throwing accuracy immensely, ascending into one of the league’s best passers in the process. And since his shaky rookie campaign only three years ago, Allen has shown no signs of slowing down as he aims to uphold the dominant level of play he’s been able to achieve so far. Though he’s shown that turnovers can still be a thorn in his side, Allen has become a student of the game, driven by his dedication and desire to succeed at the highest level with an unquenchable interest to learn from his imperfections and beat on his craft.

What he did last year was truly impressive and a tough feat to match. But then again, there’s no reason why Allen can’t throw for over 5,000 yards and 40+ touchdowns this season. And with everything at his disposal, Allen’s poised to unleash his biggest season yet.

Last season was a really big step for the Buffalo Bills. Finishing the year with an excellent 13-3 record followed by their first AFC Championship appearance since 1993, the Bills, for the first time in a long time, truly looked like Super Bowl contenders. With a high-octane offensive and a versatile defense, the Bills evolved into a force to be reckoned with and illustrated how dominant they can be.

Entering the playoffs with a big wild card victory over the Indianapolis Colts to then completely shutting down the Baltimore Ravens the following week in the divisional round, the Bills really lived up to the hype and proved just how dangerous and elite they are. Coming off a season in 2019 where they went 10-6 and suffered a swift playoff exit in the Wild Card round, last season’s accomplishments really highlighted the tremendous amount of growth this team mustered together in just a year’s time, despite adding a handful of new cornerstone players to their roster.

However, when this strong team was confronted with the living epitome of greatness in Patrick Mahomes, the Bills did not have an answer for the former MVP and struggled to keep up with the Chiefs’ offensive tenacity. Not only did they have a very difficult time trying to slow them down defensively, but on top of that, not even their offense could keep up with the scoring output from the Chiefs, resulting in yet another tough playoff exit.

What the Bills confronted, though, wasn’t an unusual setback; the Chiefs are the greatest team in the AFC and have solidified that over the last two years. And just like it is for the Ravens, Titans, Steelers, Browns and other championship-driven AFC teams, overcoming the Chiefs this year for the Bills is the greatest challenge they face in the AFC period. Making it to the playoffs is no simple task as is. But beating the Chiefs in the playoffs is the biggest test for this Bills team to surmount and remains to be a feat that seems awfully daunting for them to prevail against this season.

That being said, the Chiefs did come up short in the Super Bowl against the Tampa Bay Buccaneers, who beat them fair and square by 22 points. Although Tom Brady pulled off yet another flawless Super Bowl performance and took home the Super Bowl MVP honors, the key ingredient for their success that night was nothing but their staunch and ruthless defense led by Todd Bowles. Holding the Chiefs to only nine points, Mahomes and his offense had no solution against the Buccaneers’ defensive schemes, and the former MVP quarterback found himself scrambling helplessly all too often from start to finish.

On the contrary, this is precisely what the Bills lacked with their very own defense and was ultimately why they couldn’t slow down the Chiefs in the first place. Though they have a handful of great defensive playmakers and specialists on their unit, the Bills defense had a couple of gaps in talent and strength, particularly along their defensive line who struggled against the run and could hardly garner any pressure against opposing quarterbacks. Just to give you an idea, the Bills defense allowed over 350 total yards per game with 119.6 of them coming on the ground, finished the year in 12th in total sacks and conceded 23.4 points per game in the process (ESPN). Considering the talent and potential this defense has, those numbers were far from ideal and have to improve if they want a shot at redemption come January 2022.

But since the Super Bowl ended back in February, a series of small yet significant changes have been made with the Bills, and there’s no doubt that this team has what it takes to make it to the Super Bowl within the next two years if not sooner. It sounds kind of crazy, but the Bills made all the right adjustments over the offseason that they needed to make, putting themselves in the best position to go the distance for the first time in decades.

For starters, the Bills made defense their biggest priority this offseason, and they really capitalized on that in this year’s NFL Draft. With their first two picks, the Bills not only selected debatably the best defensive lineman coming out of the draft in Gregory Rousseau out of the University of Miami, but they also selected the gifted, defensive menace in Carlos Basham Jr. out of Wake Forest, big-time playmakers that wreaked havoc during their college years. With Rousseau bringing elite athleticism, quickness, and versatility and Bashem Jr. providing an unrelenting level of strength, grit, and power, the Bills have assembled one dangerous defensive line considering they have Ed Oliver, Mario Addison, and Jerry Hughes to begin with.

Along with these additions, the Bills also reinforced their already stacked secondary in the draft by selecting safety Damar Hamlin and cornerback Rachad Wildgoose, physical and competitive defensive backs that possess good upside and skill (ESPN). Though these rookies are all very new to the league, they all have the talent and athleticism to provide what the Bills have been seeking for defensively, it’s just a matter of when. Last year, the Bills defense ranked 14th overall in the league; this year, they have the potential to be top-five, and that’s due in large part to a very well-executed draft that addressed the most vulnerable areas of their defensive unit (ESPN).

Offensively, the Bills didn’t need to do much outside of pad their overall depth and replace the deep threat hole John Brown left behind. Well, lo and behold, they did just that. Signing Emmanuel Sanders over the offseason, a savvy veteran presence that brings tremendous downfield speed, the Bills also drafted Marquez Stevenson out of Houston, a lighting quick receiver that is downright lethal after the catch and brings big-play potential every time the ball is thrown his way. Additionally, the Bills also went ahead and drafted two bright offensive tackles in Spencer Brown and Tommy Doyle, providing a strong and young insurance policy in case Daryl Williams or Dion Dawkins deal with any injury setbacks. Though there’s a good chance both of these rookies won’t see a whole lot of starting reps this season, a deep offensive line is vital for the Bills’ long-term success, and both of these tackles possess encouraging potential.

Outside of these minor changes, the Bills offense is just about as dangerous as any other in the league and has everything it needs to replicate their success from last year. With Josh Allen getting better every season, to Zach Moss and Devon Singletary forming a complimenting, one-two punch out of the backfield, to Stefon Diggs and Cole Beasley leading the charge of a strong group of receivers, this Bills offense is so complete with not only star talent and excellent role players but also has the close-knit chemistry that an offense needs in order to succeed at the highest level.

When all is said and done, the Bills did just about everything they could to address their greatest concerns on both sides of the ball and met all of those expectations wholeheartedly. With their defense looking much stronger than last year, the Bills have a serious chance at ending their Super Bowl drought this season by not only overwhelming their opponents with their offensive resiliency but by also stifling and shutting them defensively as well. Beating out Mahomes and the Chiefs still remains to be the greatest test the Bills face down the line. But if there’s any team in the AFC that could do so this season, it’s no one else but the Buffalo Bills.