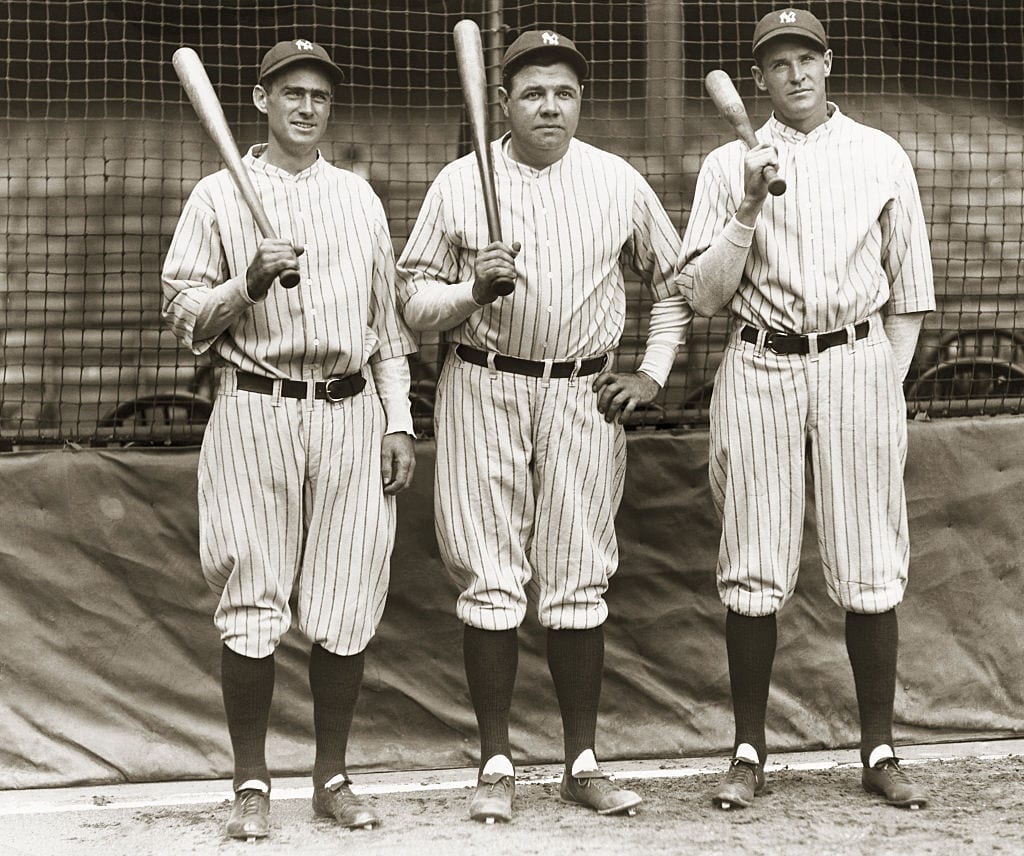 Jeter played all 20 seasons of his career for the Yankees and was one of 15 captains in New York Yankees history. He deserved to be the second unanimous hall of fame player but fell one vote short.

He had 650 1st-pitch hits, indicating he was aggressive at the plate, which makes a perfect leadoff hitter for this team.

A 56-game hitting streak is Dimaggio’s most popular call to fame, however, he did make the all-star team all 13 years of his career.

He hit over .300 in 11 out of 13 years at the highest stage, which is almost never seen in today’s baseball.

To top it all off, he served his country in WWII for three years.

“The Bambino” was the greatest display of power in the early 20th century and no one will forget when he “called his shot.”

His 714 home runs have kept him among the top three home run hitters for almost a century. He has the best slugging percentage, OPS, and OPS+ of all-time as well.

He is arguably the best all-around hitter ever and needs to be in the middle of this lineup.

In 1931, Gehrig drove in 185 runs, which is the second-most for a single season in history, behind Hack Wilson, who drove in 191 runs a year prior.

Gehrig also won the triple crown in 1934, meaning he led the American League in home runs, RBIs, and batting average, a feat that only a few players have achieved in their careers.

Following in DiMaggio’s footsteps, Mantle, led the New York Yankees to seven World Series titles. He won the triple crown in 1956, paving the way for his first MVP award.

Mantle was arguably one of the first five-tool players in baseball, as he led the American League in many batting categories, in a single season, at some point in his career and even won a gold glove award.

Behind Babe Ruth, Mantle is second on the all-time Yankees home run list.

Although his best years were for the Texas Rangers, A-Rod won two MVPs as the Yankees’ third baseman.

Yes, he did admit to using steroids, but he was still one of the most feared hitters in baseball for almost two decades.

Berra, won three MVPs, 10 World Series rings, meaning he has one for each finger, not even Tom Brady has reached that level of success.

Between his “Yogisms” and serving in WWII, he did all you can ask for of a man and a baseball player. He is the textbook definition of a legend in the game of baseball.

There is an argument to have Robinson Cano in this lineup, however, Lazzeri’s Yankees tenure was longer and was inducted into the Hall of Fame. He also helped the historic teams of the 1920s and 30s win five World Series titles.

This is just to fill a hole in the lineup without a DH, if there had to be a DH, a case could be made for Don Mattingly, Graig Nettles, or Dave Winfield, cannot go wrong with any of these players.

Ford was arguably the best pitcher in Yankees history and would be the opening day starter for this team.

He was Yogi Berra’s predecessor and helped the Yankees win seven World Series rings. An 11-time all-star and a hall of fame inductee earn his spot on this team.

His best season was 1986 when he hit 53 doubles. Mattingly is a great pinch-hit option off the bench.

Cano got the assist on the final out of 2009 World Series game 6, which one the Yankees first World Series since 2000. He played all but one game that season and became a big part of the New York Yankees team in the early 2010s.

He is the only active player on this team, but his spot is well deserved.

Nettles led the American League in home runs in 1976, with 32. He is a fan favorite of the ’70s Yankees teams and needs to be on this team.

Last, but not least, Winfield had one of the best arms of any right-fielder ever. He would rack up double-digit outfield assist seasons a bunch of times in his career.

He also had middle-of-the-lineup production at the plate during his career, making him the perfect player to round out this team.