However, since both fights were close, there were a lot of people giving Machida a shot on Friday night facing the Bellator heavyweight champion. The betting lines on the other hand were drastically in the favor of Bader.

In the first round, it looked like we were seeing the old Lyoto Machida. The Dragon was light on his feet and he was beating up the body of Ryan Bader with body kicks. Machida won the first round on all three scorecards.

However, after that round, Machida hit a brick wall at Bellator 256. When Ryan Bader went to his wrestling, it spelled the end for Machida. Bader continuously took Machida down and beat him up the rest of the fight. In the end, Bader won a lopsided decision.

Will Machida retire after Bellator 256?

Lyoto Machida never gave up at Bellator 256. The Dragon kept trying until the final bell and was even throwing heel kicks to the back of Bader’s thighs from the guard as the final bell sounded.

However, Machida was badly beaten up after the five round fight. Machida was gassed really after the second round and didn’t have anything left to give. In the past, we would have never seen Machida that tired in a fight.

However, at nearly 43 years old, it appears that father time has caught up with The Dragon. With that being said, should Machida hang it up after Bellator 256? I think it’s safe to say that Machida’s days of competing with even Bellator’s best are behind him.

I don’t think he would be favored to beat any of the light heavyweights that are in this Grand Prix. In reality, Machida should probably hang it up after last Friday. However, I’m not sure he’d be willing to walk away on a loss.

Machida has had a sensational career and reached the pinacol of the sport in becoming a UFC champion. There’s nothing left for him to prove and he’s just 5-7 in his last 12 fights. Bellator would give him another fight if he wants it, but with never left to prove, I’m not sure it’s worth it. 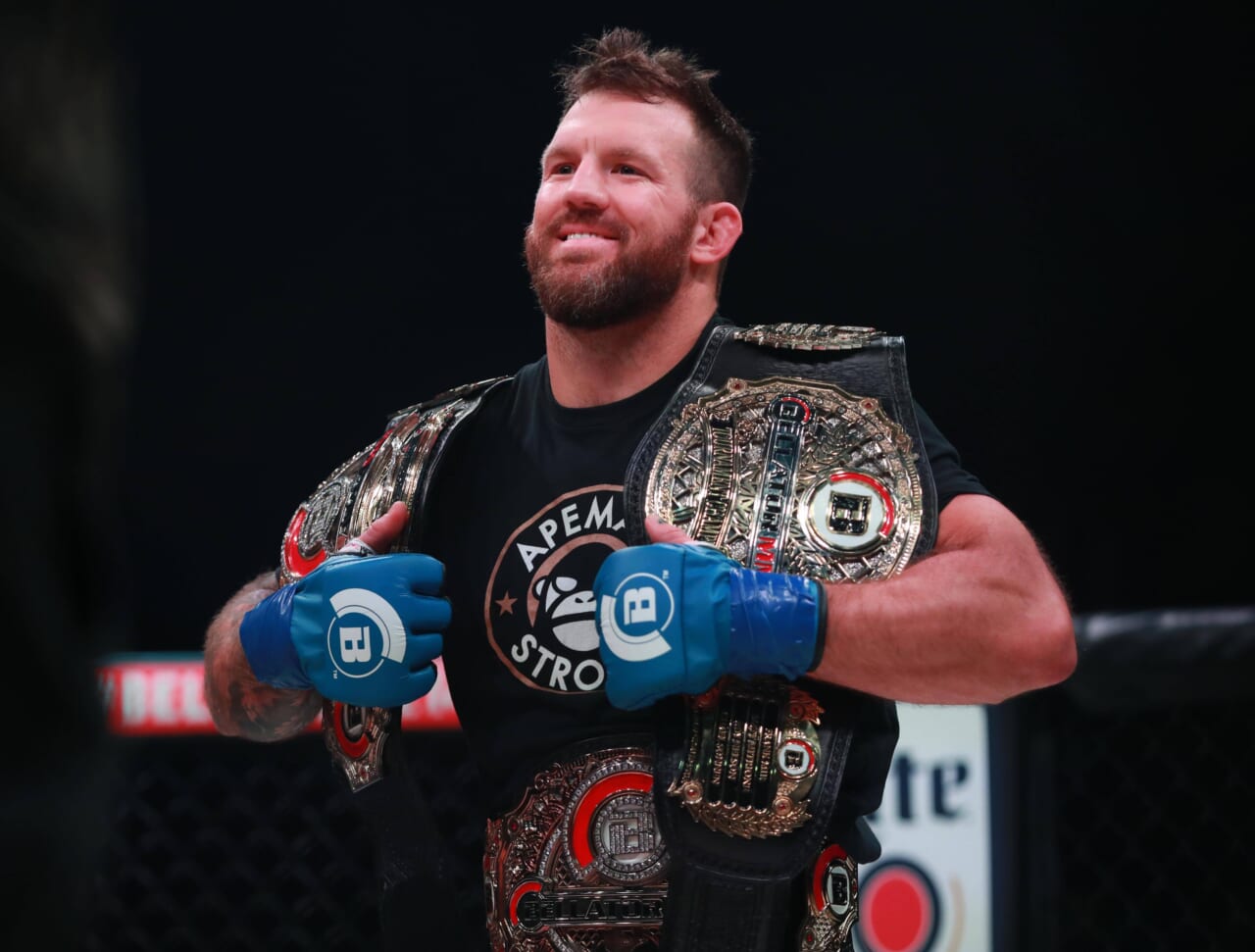 These two first met back in 2012 when both men were still fighting in the UFC. Machida was able to score the second round knockout that night. However, it was Ryan Bader who was the massive betting favorite heading into tonight’s contest.

The last time we saw Ryan Bader in the Bellator cage he lost his light heavyweight title to Vadim Nemkov. However, that was Bader’s first light heavyweight fight since 2017 and he didn’t look very fluid in the cage.

He was needing to have that light heavyweight rust knocked off tonight to beat The Dragon. Lyoto Machida has lost two in a row leading into Bellator 256. However, both of those fights were very close split decisions.

Despite being almost 43 years old, Machida still looks like he can hang with some of the best in the world. Bellator 256 was going to be a huge indicator on what Machida has left in the tank.

The Bellator 256 main event kicked off with a touch of the gloves. Bader immediately looked to press the action on Machida. However, he quickly backed off and both men started gauging the range.

Bader tries to answer with his own kick, but it doesn’t land. The Bellator heavyweight champion lunges forward with a wild right that misses and Machida counters with another solid body kick.

The counter for Machida were on point early. Bader again tries to close the distance, but Machida counters and slides out of the way again. The ribs of Ryan Bader were very red from the kicks of Machida.

Bader is finally able to get inside and land a couple of shots after he gets Machida against the fence. A big high kick lands for Machida and Bader looks wobbled. Machida presses forward, but the round comes to a close. 1-0 Machida at Bellator 256.

The second round opened and the Bellator heavyweight champion looked a little less confident. Machida tries to open with another headkick, but Bader blocks well. However, Machida lands a nasty body kick after.

Bader throws a powerful kick, but it didn’t land flush. Another big body kick lands for Lyoto Machida. Bader is pressing forward, but he’s not landing much here in the first two minutes of the round.

Machida looked extremely composed as Bader continued to try and press forward. Bader had Machida’s back to the fence and started to look for big shots. However, he wasn’t able to land clean.

Machida lands a nice superman punch and Bader explodes into a takedown. He rushes Machida against the fence and gets the takedown. Immediately Machida started to use the fence, but Bader was landing good shots.

This is where the Bellator champion wants to be. Ryan Bader continued to land some solid left hands along the fence. The round comes to a close and it’s all even after two at Bellator 256.

There appeared to be a bit more pep in the step of Bader to start the third round. Machida tried to start the round with one of his blitzes, but Bader evaded. However, Machida did land another good body kick.

Bader moved forward and again, Machida found his back to the fence. Machida continued to circle trying to keep Bader from cutting him off. A big shot lands for the Bellator heavyweight champion and Machida is looking tired.

Some deep breaths from Machida and Bader lands another big shot. He chains that shot into a big double leg and he gets Machida down. Bader immediately started going to work with big ground and pound.

Machida tried to work a couple of escapes, but he’s exhausted. Bader started dropping massive shots on Machida, but The Dragon took them well. Machida was able to work back to his guard.

One minute left in the round and it’s all Ryan Bader right now. Two more clean shots land for Bader and Machida looks busted up. Bader continues to pepper Machida and the round comes to a close. The momentum is all Ryan Bader at Bellator 256.

Entering the fourth round at Bellator 256 and Lyoto Machida wasn’t looking so good. Bader immediately presses forward as the fourth round begins. Machida tries to throws his best power shots at Bader and a couple of clean shots land.

However, nothing seriously hurt Bader. Bader stayed composed and he countered Machida’s attack with a takedown. The Bellator heavyweight champion again had Machida against the fence and he started working his ground and pound.

Bader continued to softened Machida with shots as he looked to pass the guard. Two clean elbows land for Ryan Bader and Lyoto Machida wasn’t looking great on the bottom.

Machida was looking hurt and didn’t appear to have the energy to try and get back up. Bader continued to land big shots in the final minute. The fourth round comes to a close at Bellator 256 and it’s all Ryan Bader.

Entering the final round and Lyoto Machida needed a miracle at Bellator 256. The two touch gloves and Bader immediately goes back to the pressure. Machida lands a couple of kicks, but Bader shoots in and lands another takedown.

Bader opens his ground strikes with a vicious body shot that got a reaction out of Machida. Machida was trying to defend, but he just didn’t have the energy. He briefly got to his feet, but Bader immediately dragged him down.

Bader continued to pepper the face of Machida with big shots on the ground. However, there was no quit in Lyoto Machida. Bader pressed Machida against the fence and continued to land big shots.

Bader gets to the back of Machida along the fence. Machida tried to use that moment to get to his feet, but Bader was so heavy on the pressure. Bader immediately pulls Machida right back down.

One minute left at Bellator 256 and Machida needed a miracle. Bader started pouring it on trying to finish, but Machida defended well. The final bell sounds and Ryan Bader will pick up the win and advance in the Light Heavyweight Grand Prix.

This fight is actually a rematch from 2012. Back in 2012, both men were still in the UFC and Lyoto Machida was able to knock out Ryan Bader in the second round.

Overall, The Dragon is 2-2 in his four fights since moving from the UFC to Bellator. On the other side of the cage tomorrow night is the Bellator heavyweight champion Ryan Bader.

Bader joined Bellator back in 2017 and that is where his career took off. In his debut he defeated Phil Davis and then Linton Vassell to become the light heavyweight champion. After that, he went on a run at heavyweight to capture the title and his run included a knockout of Fedor Emelianenko.

The last time we saw Bader was at Bellator 244 in August. Bader made his return to the light heavyweight division for the first time since 2017 to defend his title. The former champion was knocked out in the second round by Vadim Nemkov.

I have to say that I’m incredibly intrigued by this matchup to open the Bellator Light Heavyweight Grand Prix. Ryan Bader is the massive betting favorite and he should be considering his status and the fact that Machida is almost 43 years old.

Machida has also lost two in a row, but both fights were incredibly close. For Lyoto Machida, he has to keep this fight standing. He needs the main event tomorrow to become a point style striking matchup. If he can do that over three rounds, he can easily win a decision.

Bader cannot stand a lot with Machida. He’s going to be at a big speed disadvantage and we saw how rough that was for him against Vadim Nemkov. Bader needs to be aggressive and he needs to look for takedowns early in this matchup.

I can see both men winning at Bellator 256. However, I’m going to lean slightly towards Bader. I believe he’s going to be able to get this fight down just enough to earn himself a decision. However, I do see this fight going the distance.