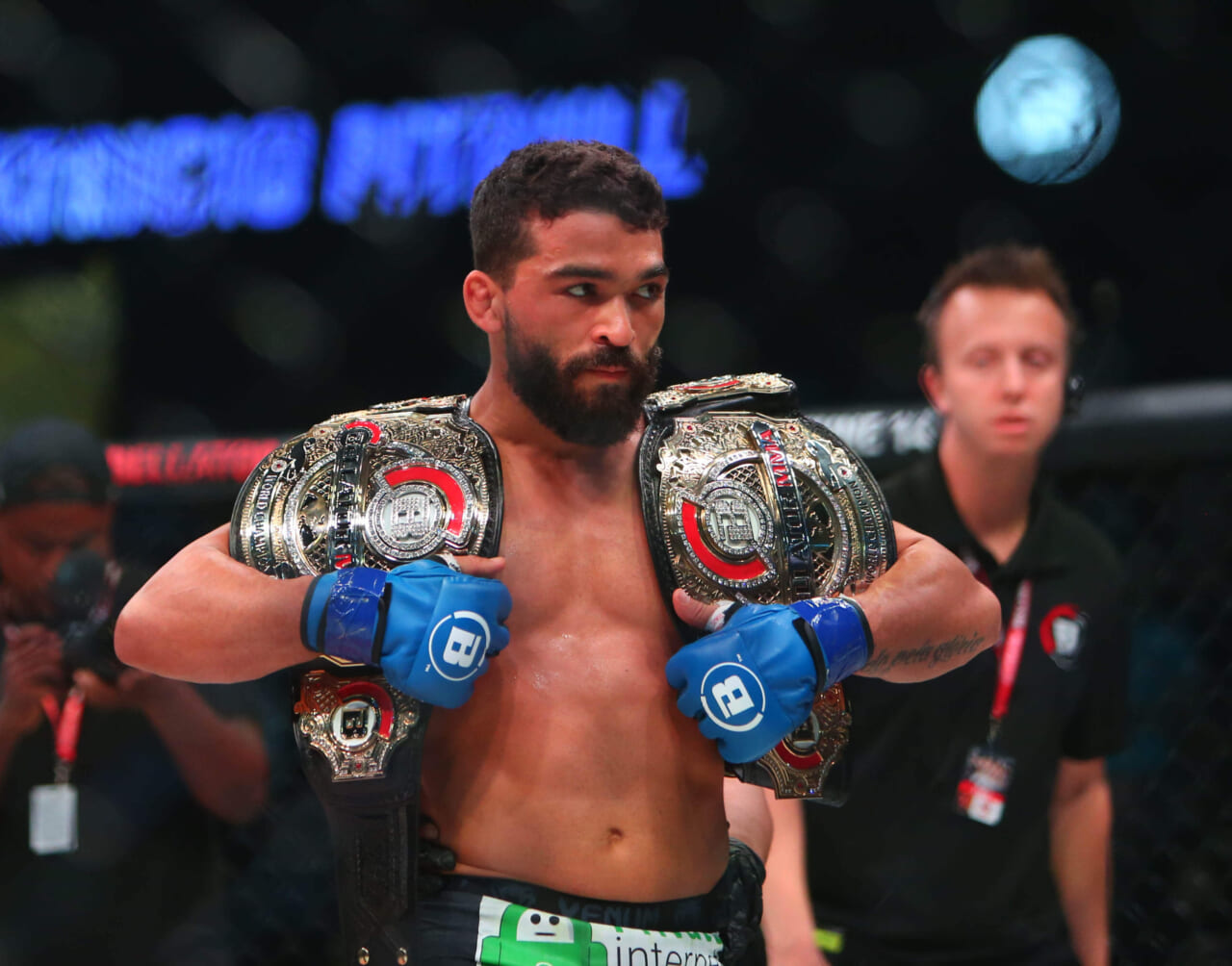 Last weekend at Bellator 255, Patricio “Pitbull” Freire (32-4) defended his featherweight title against Emmanuel Sanchez (20-5). The fight was a semifinal matchup in Bellator‘s Featherweight Grand Prix, but the title was also on the line.

The two met for the first time back in 2018 and Pitbull walked away with a decision win. Since 2017, Pitbull had been the only man to have defeated Sanchez inside the Bellator cage.

Sanchez made the walk on Friday night having gone 7-1 in his last eight fights. Many, including myself, thought he was going to give Pitbull a run for his money. The first fight was relatively close, but the second fight was anything but.

At Bellator 255, we saw an extremely patient Pitbull. He waited for Sanchez to engage and when he did, Pitbull blasted him with powerful counters. At one point, Sanchez went for a kick and ate a left hook for his troubles.

That left hook sat him down, but he got right back up and engaged. The problem was he went right into the guillotine choke of Bellator‘s two-division champion. Pitbull tightened the choke and put Sanchez to sleep setting up the finale that everyone has been wanting to see.

Bellator’s dream scenario has played out

When Bellator unveiled the Featherweight Grand Prix, fans everywhere wanted to see one matchup in particular. That matchup would feature Patricio Pitbull and the undefeated superstar, AJ McKee (17-0).

Like Patricio Pitbull, McKee dominated his way to the finals of the Grand Prix. McKee has spent his entire career with Bellator and he’s finally getting his shot at the title. The 25 year old is looked at as arguably the best young fighter in the sport.

When these two fighters face off, it’s a massive deal for Bellator. Patricio Pitbull is the greatest fighter to have ever laced up the gloves in Bellator. The two-division champion holds the most wins and he’s the most decorated in terms of championships.

AJ McKee is a homegrown star, but he’s a star that has extremely high aspirations. McKee has been vocal that he’s keeping an eye on the top guys over in the UFC. The Mercenary also said that he only has two fights left on his current Bellator contract.

With that in mind, this fight becomes a big deal for Bellator. If McKee wins, he would be the featherweight champion with only one fight left. McKee has said that if he beats Pitbull, he wants them to rematch at lightweight so he can try to become a two division champion.

While that might be great in theory for Bellator, it’s actually a nightmare scenario. The UFC would likely pry McKee away and he would walk away as an undefeated two-division champion.

Meanwhile, Patricio Pitbull has no desire to leave Bellator. He is the face of the promotion and he just signed a new deal recently. While McKee is the future, it would probably be best for Bellator if Patricio Pitbull walks away victorious when they fight.

Tomorrow night, Bellator will finally return for their first fight night of 2021. In the main event of the evening, two-division champion, Patricio “Pitbull” Freire (31-4) will be defending his featherweight title against Emmanuel Sanchez (20-4).

This matchup is a rematch from their first fight at Bellator 209 back in late 2018. That night, Sanchez was able to push Pitbull hard, but ultimately he couldn’t outwork the great Pitbull and Patricio Pitbull scored a decision win.

This matchup is for the featherweight title, but it’s also a semi-final matchup in the Bellator Featherweight Grand Prix. The winner of this fight will take on the unbeaten AJ McKee in the finals later this year.

Patricio Pitbull is arguably the best fighter in Bellator history. The two-division champion is riding a six-fight win streak that includes a win over UFC lightweight contender, Michael Chandler.

Emmanuel Sanchez seems to be peaking at just the right time. After his failed attempt to defeat Pitbull back in 2018, Sanchez has won three fights in a row. His last win came at Bellator 252 and he looked extremely impressive in a decision win over Daniel Weichel.

Patricio Pitbull is a massive favorite to retain his Bellator featherweight title. I’ve seen some lines creep up to -400 and even as great as Pitbull is, I think those lines are a little off.

Yes, Pitbull won the first matchup, but Emmanuel Sanchez had his moments. Sanchez was able to win rounds against the Bellator champion and I think he’s even better than he was the first time.

Sanchez has very good cardio, offensive wrestling, and his boxing has looked really good as of late. I’m a big fan of his straight right hand. If he’s aggressive tomorrow night, he will stay in the fight just with his activity.

It’s hard to find a weakness in the game of the two-division Bellator champion. Pitbull is good on the ground and he has dynamite in his hands. The champion is dangerous everywhere, but we have seen him struggle if a wrestler can take him down and hold him.

A key for Sanchez tomorrow night could be a high striking pace and some timely takedowns. If he can do that, I think he can pull the upset at Bellator 255. However, that’s an extremely tall order.

Patricio Pitbull is one of the best fighters in the world regardless of promotion. There’s a reason he’s the two-division Bellator champion and I think he narrowly holds onto the featherweight title tomorrow night. However, I’m expecting a war between these two.

Bellator MMA officially announced the date for their final semi-final matchup in their Featherweight Grand Prix. The promotion announced today that Patricio “Pitbull” Freire (31-4) will defend his featherweight championship against Emmanuel Sanchez (20-4) on April 2nd.

This matchup had already been predetermined with the Grand Prix bracket, however, we finally have a date for this matchup. This title fight will headline Bellator‘s first event back in 2021.

The winner of this matchup will carry the featherweight title into the Grand Prix finale to face AJ McKee. These two men have history and they faced off back in 2018 at Bellator 209.

That night, Patricio Pitbull successfully defended his featherweight title by winning a unanimous decision. Pitbull hasn’t lost inside the Bellator cage since 2016 when he lost to Benson Henderson due to a leg injury.

If you want to take out that loss, nobody has defeated Pitbull since Daniel Straus did it in 2015. Pitbull is widely considered to be the best fighter that Bellator has ever had and his two world championships show off his greatness. However, he’s in for a tough matchup on April 2nd.

There are so many things that Emmanuel Sanchez has going for him heading into Bellator 255. First and foremost, he’s incredible tough and durable. He’s not going to back away and be intimidated by the challenge of facing Patricio Pitbull.

Another thing that he has going for him is that he already has experience facing Pitbull. Yes, he lost the first fight by decision. However, it’s usually easier for the loser of the first fight to prepare for the rematch than the winner.

Nobody is going to be expecting Sanchez to walk out of Bellator 255 the featherweight champion. That’s another big advantage for the challenger. All of the pressure in this fight is on Patricio Pitbull.

Pitbull is the defending champion and he’s expected to win to setup the superfight with AJ McKee. McKee already did his part and now Pitbull has to take care of business. There is zero pressure on the shoulders of Sanchez. This should be a fantastic matchup on April 2nd.