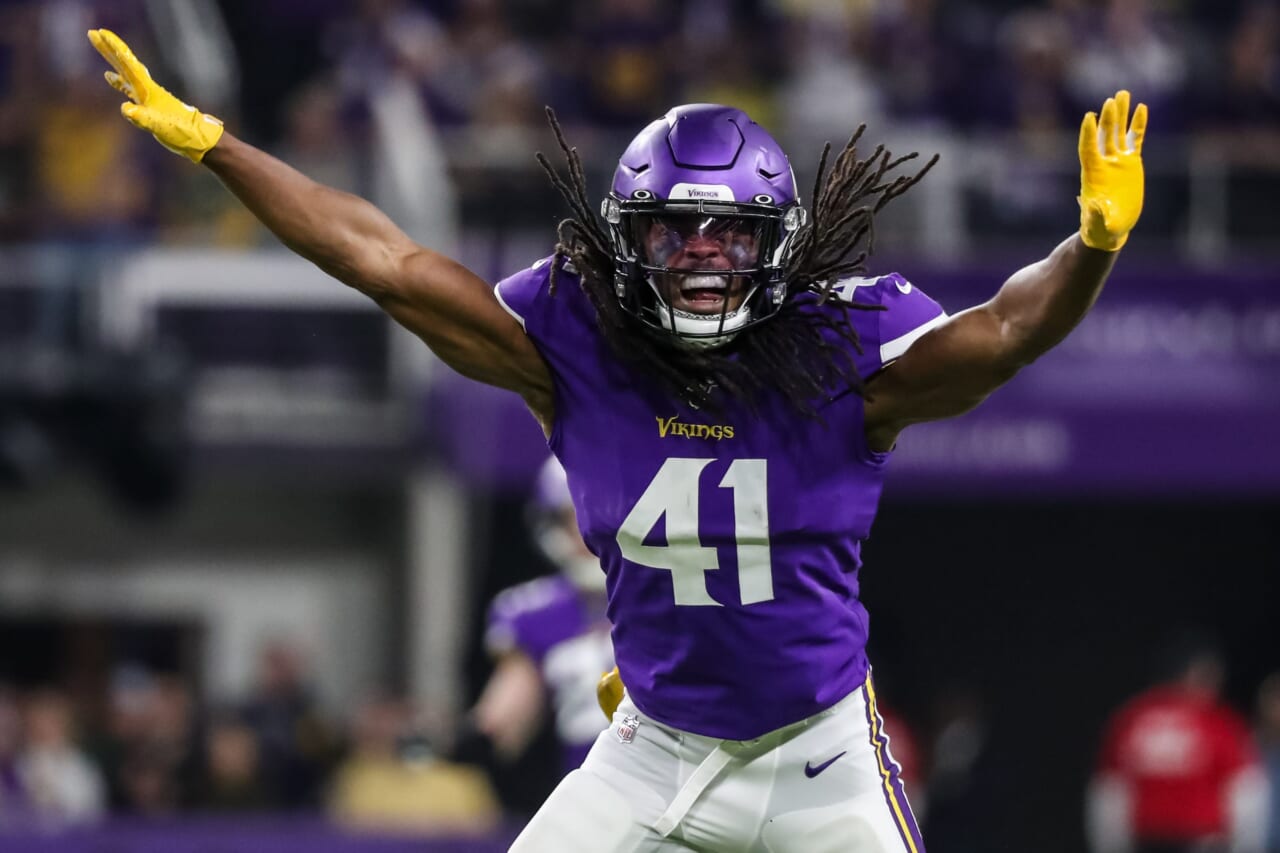 TheÂ New York GiantsÂ spent much money in free agency this offseason. They made a couple of splash signings on defense with linebacker Blake Martinez and cornerback James Bradberry. But New York’s defense still has room for improvement.

The 2020 NFL Draft will take place in sixteen days. Rumors indicate that the Giants are going to prioritize upgrading the defense in the draft. New York has invested a sizeable amount of draft capital into their secondary over the past two seasons. But there are some talented safeties in this year’s class that the Giants could plug into the rotation along with Jabrill Peppers and Julian Love.

Outside of the NFL Draft, there is still a way for New York to acquire an uber-talented safety. Prior to the New League Year, the GiantsÂ reportedly did have an interestÂ in signing Anthony Harris. Unfortunately, the Vikings placed the franchise tag on Harris, keeping him off the open market. But the elite Vikings safety is still available if the Giants are still interested.Â According to Ian Rapoport, the Vikings â€œacknowledged to teams that Harris could be had for a mid-to-late round draft pick.â€ The highest-graded safety in the NFL, according toÂ Pro Football Focus, could be acquired via trade for a mid-to-late round pick. This is something the Giants should be all over- and apparently, they are.

Anthony Harris Back On The Trade Block

According to new reports, an Anthony Harris trade possibility is “back on the table.” Darren Wolfson of KSTP-TV reports that the contract negotiations between the Minnesota Vikings and Anthony Harris are “not quite going so well.” Later in the report, “Wolfson mentions the New York Giants as a potential suitor.” The rumors seem to indicate that the Giants are attempting to trade for Harris, though the Vikings might have their price set a little too high.

With the NFL Draft just sixteen days away, the Vikings and Giants would have to come to terms on a trade pretty soon if it is going to happen. The deal would involve moving draft capital and could shift each team’s respective draft plans.

Why The Giants Should Make This Trade

The price of trading for Anthony Harris is unknown. However, the initial asking price at the start of free agency, according to Ian Rapoport, was a “mid-to-late round draft pick.” If the price has gone up marginally, it still is likely a bargain deal for one of the best safeties in the NFL.

Anthony Harris is a ball-hawking coverage safety. In 2019, the Vikings safety led the NFL in interceptions with 6 picks, one of which was a pick-six. He also added 11 passes defended and 60 combined tackles (with only 3 missed tackles), both of which were a career-high. Quarterbacks struggle to throw into Anthony’s coverage. Harris had a 44.2 passer rating allowed when targeted. His coverage was targeted 23 times, and he allowed 15 completions for only 151 yards, 0 touchdowns, and those 6 interceptions.

Trading for Anthony Harris would instantly upgrade the Giants’ secondary. A move like this would not push any talent to the bottom of the depth chart, either. Jabrill Peppers will still start at strong safety. Julian Love will be able to move back to his original position, slot cornerback. A secondary featuring Harris, Peppers, Love, Baker, and Bradberry could be a quarterback’s worst nightmare.

The New York Giants are desperately in need of a starting free safety, and there are several avenues they can take to find one. The NFL Draft offers quality options to supplement the void, specifically in the shape of Antoine Winfield in the second round, known for his ball-hawk abilities and instinctual play.

Winfield is a top option at 36th overall — formerly the captain of the Minnesota football team, recording seven interceptions in 2019, showing off his coverage skills and right-place, right-time mentality. If the Giants want to spend a high draft pick on his skill-set, they would be gaining an immediate starter at the position for the foreseeable future. His downfall, however, is his athleticism and tackling technique at times. Winfield’s elite vision and instincts compensate for his lack of speed/size, and his tackling can always be improved — Joe Judge will harp on the details.

Alternatively, the Giants could seek help in the form of a trade. The Minnesota Vikings recently franchise-tagged Anthony Harris and are working on a long-term deal, but nothing is set in stone. They have been patient with his market and negotiations, indicating that he might be a trade option for a needy-team like Big Blue.

What Anthony Harris would bring to the New York Giants:

Grabbing Harris would immediately turn the free safety position into one of absolute strength, but it would likely cost GM Dave Gettleman at least a third-rounder to pry him away from the Vikings. It would be well worth the investment if it didn’t break the bank, though, considering Harris’ six interceptions and 11 passes defended in 2019.

Harris started in 14 games last season, the most in his career, previously starting in nine games in 2018 and three in 2017. While those numbers are a bit concerning, it seems as if Minnesota were dabbling with Harris in different positions (SS), which ultimately didn’t pay off. Permanently moving him to free safety saw his value explode and landed him a franchise tag deal.

If the Giants can pry him away, they will be in good shape in the defensive secondary, allowing Gettleman to invest draft picks into the offensive line and pass rusher positions.

The New York Giants are revamping their secondary. After spending three draft picks on the unit last year (four if you count Sam Beal), New York doubled down and signed free agent cornerback James Bradberry to a three-year deal worth $45 million.

The Giants’ new secondary features Bradberry and DeAndre Baker as the outside cornerbacks with the slot position to be determined. Jabrill Peppers will remain the starting strong safety. But who will man the free safety position? By the looks of it, Julian Love will be the Giants’ starting free safety in 2020.

Julian Love showed promise filling in as a starter for the injured Jabrill Peppers in the final five games of the 2019 season. The rookie recorded 37 combined tackles, 1 interception, 1 forced fumble, and only 4 missed tackles. The former collegiate slot cornerback converted to safety as a rookie and allowed only 190 yards and 1 touchdown in coverage.

Julian Love did a pretty solid job diagnosing run plays in 2019 — playing in a strong safety role while Jabrill Peppers was out injured.

A lot of potential with him could slide into FS role this year.#giantschat pic.twitter.com/N6wLEKEATx

If Not Love, Then Who?

The Giants are running out of cap space now after signing free agents such as Blake Martinez and James Bradberry. Prior to the New League Year, the Giants reportedly did have an interest in signing a free safety: Anthony Harris from the Minnesota Vikings.

Unfortunately, the Vikings placed the franchise tag on Harris, keeping him off the open market. But the elite Vikings safety is still available if the Giants are still interested. According to Ian Rapoport, the Vikings “acknowledged to teams that Harris could be had for a mid-to-late round draft pick.”

The highest-graded safety in the NFL according to Pro Football Focus could be acquired via trade for a mid-to-late round pick. This is something the Giants should be all over. If New York were able to acquire Harris via trade, they would start him at free safety and allow Julian Love to move back into the position of slot cornerback, which was his primary position in college. In his scenario, the Giants’ secondary would be complete and feature one of the best safeties in the league on the back end, along with plenty more youthful talent.