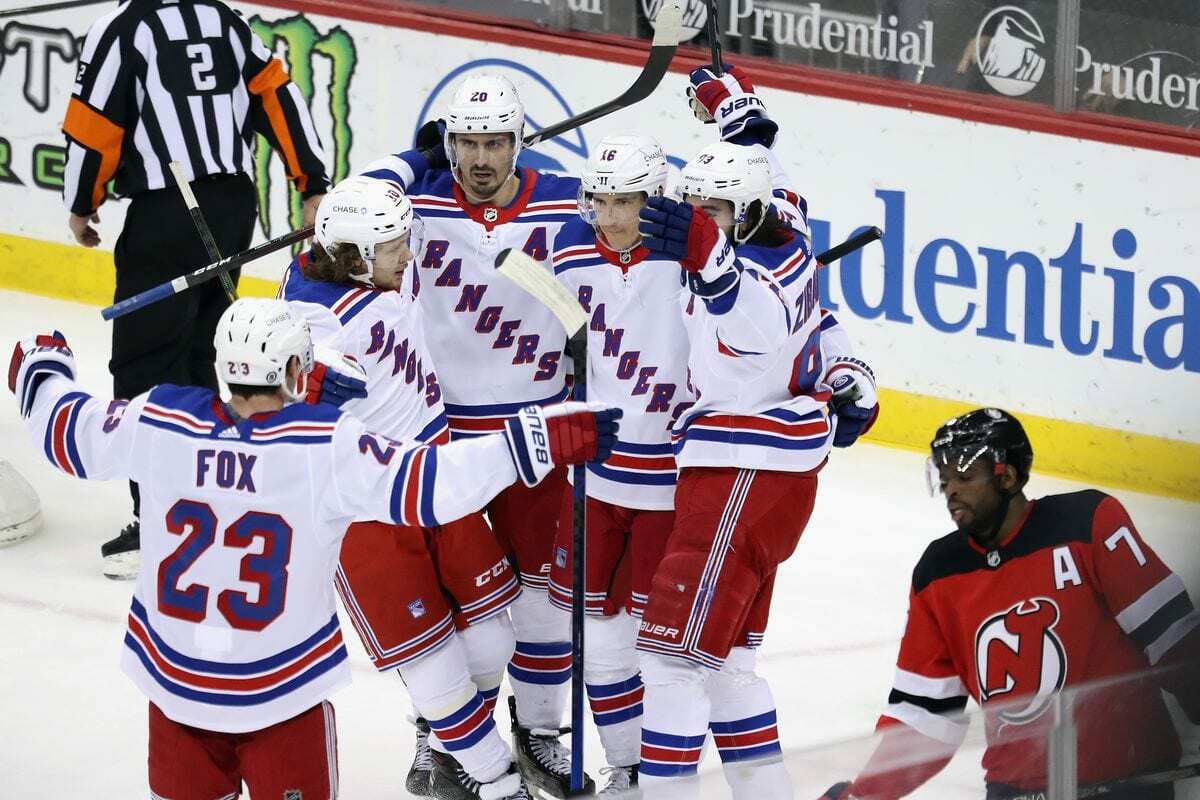 The New York Rangers continue to win hockey games, looking for a playoff miracle, as the NHL season concludes on May 8.

The New York Rangers have been on the outside looking in for a playoff spot for most of this abbreviated NHL season.  A slow start by some of its stars, a nine-game absence due to an absurd accusation against Artemi Panarin, and plenty of inconsistency between veteran scoring and the development of the “kids” is why the team sits in fifth place, four points behind the Boston Bruins who have two games in hand.

The Blueshirts have been unable to put a winning streak together, instead of settling for a win-lose, win-lose format for much of the 2021 campaign.

The month of April began the same way with the Rangers splitting all three-game series against Buffalo, Pittsburgh, and the Islanders.

Then a crucial four-game set began against the struggling New Jersey Devils. The Rangers needed every one of the eight points available and surprisingly to some, the team completed the sweep on Sunday afternoon at the Rock.

The win didn’t come without some poor play with the club blowing big leads in each of the last two games. Yet at the end of the day, a win is a win as head coach David Quinn eluded to during Sunday’s post-game zoom conference call.

“When you come up with four wins I don’t care what it looks like, I don’t care how many leads you blew, I don’t care. It doesn’t matter. It really doesn’t if you find ways to win and that’s what we did.

Now, that being said, we certainly understand that if we’re going to have success, we’ve got to play better. And we know that that’s not lost on us. It’s not lost on the coaches, and I don’t think it’s lost on any of the players.”

Playing better needs to begin immediately with the schedule the team has standing in front of them.

The math may not seem to make sense, but the Rangers have a better chance of chasing down the second-place New York Islanders rather than the fourth-place Boston Bruins.

What the heck am I talking about?  Let’s break it down and maybe clarify some of the doubt people may have in this theory.

The Rangers and Islanders have played 45 games each.  The Rangers have 52 points with the Islanders being eight points better at 60. The two teams play each other three more times this season beginning with a game Tuesday night in Long Island.

As much as a long shot as it is, should the Rangers win those three contests, and get a little help (which has not happened all month) the Blueshirts could have a good shot to overtake the Islanders.

The Long Island rivals play three consecutive games against Washington following Tuesday’s nights game against the Blueshirts. Then a two-game set against the Rangers. Then they have two against Buffalo, two against New Jersey and their final game is at Boston on May 11.

The Bruins are harder to catch because of the number of games they have left In the season. Currently, they have two games in hand over the Rangers and also are on a four-game winning streak.

The Bruins have 13 games remaining, five of which are against the Buffalo Sabres. They also play the Pittsburgh Penguins, New Jersey Devils, and Rangers twice and completed their extended schedule with a game in Long Island and at home against the Caps on May 11.

They are scheduled to play two more games after the game against the Rangers on May 8.

Mathematically the Rangers can catch either teams, but this late in the season chasing down the Islanders may be the best way to get into the postseason.

Regardless of how things end up for the Rangers this year, the young kids are gaining so much experience from this simulated NHL playoff scenario.

Alexis Lafreniere, Filip Chytil, Kaapo Kakko, Vitali Kravtsov and Igor Shesterkin have all found the score sheet and continue to grow into hockey players that fear no situation or opponent.

For one of the rare times this season the veterans and the kids have been able to play their best hockey at the same time.

When this team plays on all cylinders, as five-man units on the ice, they can compete with any other team in the NHL. Their speed on the ice has caused plenty of chaos for opposing teams, just ask the Devils who had to deal with the Ranger Roadrunners four times in the past week.

Wherever the team ends up on thelast day of the season doesn’t really matter.  What should raise the teams and the fan base’s optimism is a renewed energy on the ice that will get better and better with every game.

This club is learning how to win hockey games instead of trying not to lose games.