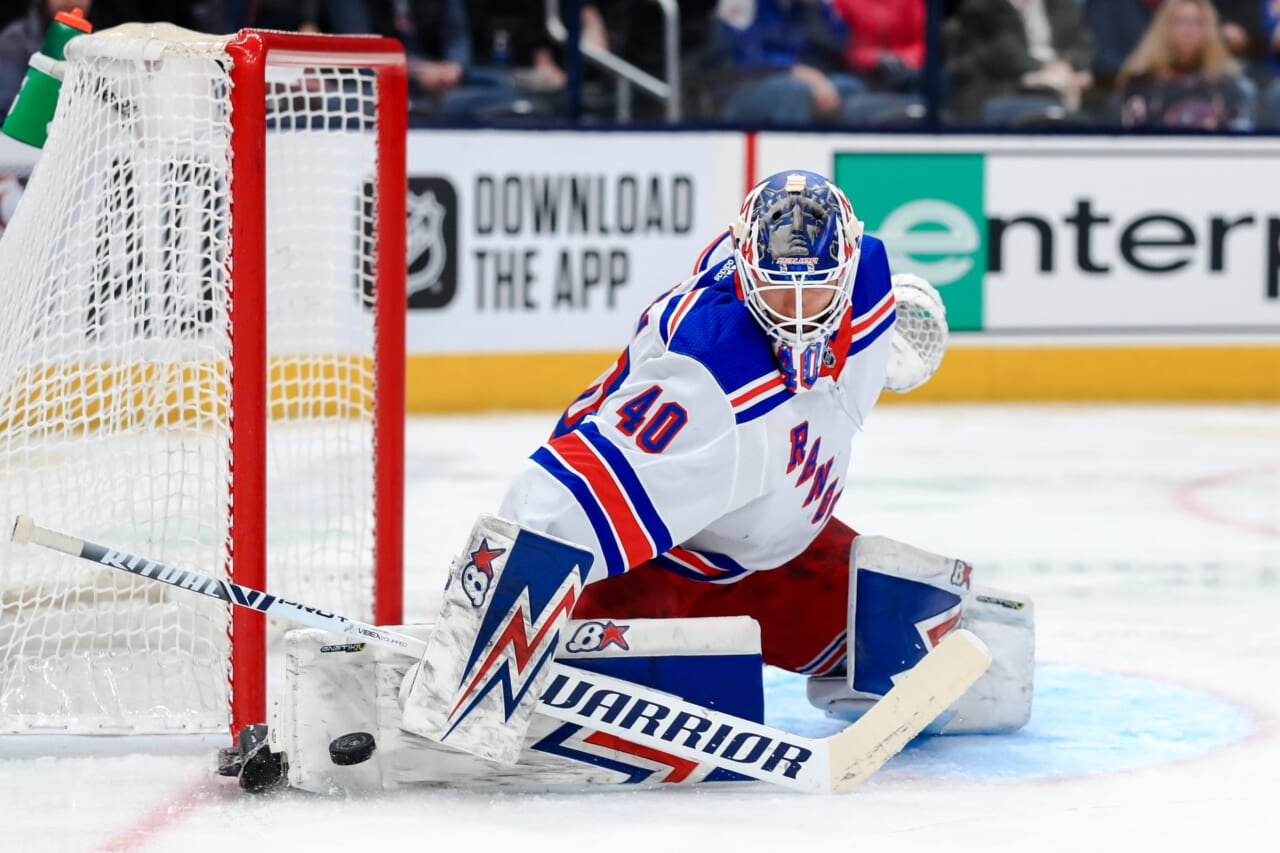 The New York Rangers took a one-goal lead into the third period, but Alex Ovechkin scored twice in the third period and the Washington Capitals rallied for their seventh consecutive win by the score of 2-1.

Artemi Panarin scored the first and only Ranger goal at 16:42 of the first period. Per the fine people at NYR Stats&Info, Panarin extended his point streak to four games. He has also registered a point in each of his last eight games against the Capitals and has tallied 11 points (three goals, eight assists) in his last five games against Washington.

Goaltender Alexandar Georgiev allowed just those two goals to Ovechkin on 18 shots in the loss.

The New York Rangers were done in by Ovechkin

Coming into the game, Ovechkin had six goals and one assist over the last 10 games for Washington.Â  He recorded his 147th career multi-goal game and tied Gordie Howe for fourth place on the League’s all-time list. Ovechkin has seven goals in his past seven games and 720 in the NHL, 11 behind Marcel Dionne for fifth place in NHL history.

After the game, Jacob Trouba talked about the game and the Ovechkin goals in his post-game Zoom conference. “We had some breakdowns but we liked how we played. He had a couple of rebounds in the last five minutes, it’s tough to lose that way. That is a team that has been playing really well and they have some high-powered offensive weapons.”

Acting coach Kris Knoblauch said in his post-game Zoom conference that “I think on the first Ovechkin goal it was a matter of sorting out who was the first man back. Goal scorers find a way to score goals and usually it is around the net. It was a small mistake but ultimately you can’t keep him off the score sheet all the time.”

There was a little bit of good news on Friday, as the Rangers reported that goaltender Igor Shesterkin skated Friday morning and remains day to day with a strained groin. Keith Kinkaid backed up Georgiev while Shesterkin missed his eighth consecutive game since getting injured on March 4.

The two teams will square off again in Washington with a 7 p.m. puck drop. 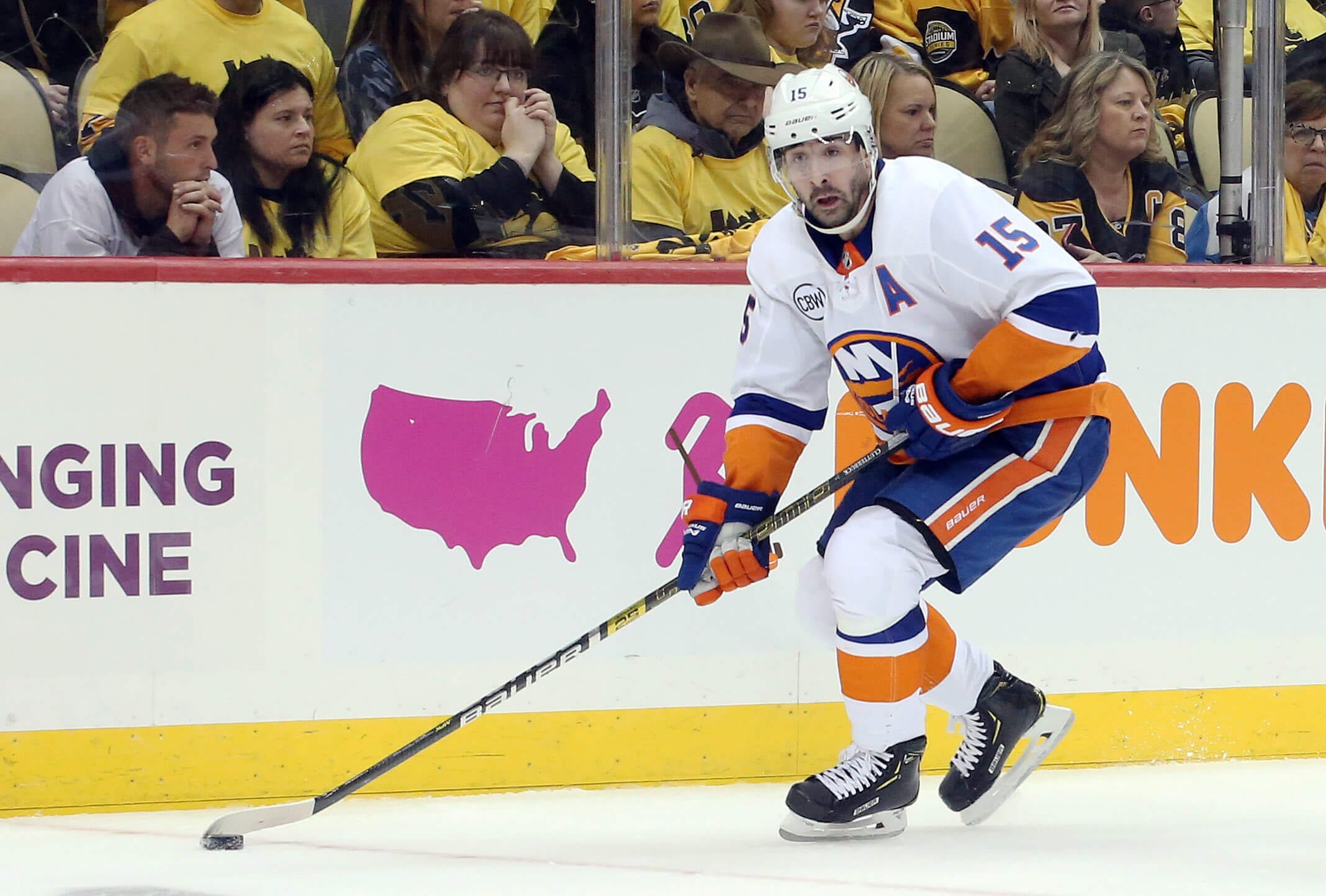 The New York Islanders beat the Washington Capitals 5-2 to take a 2-0 lead in the series. This was one of the best Islander playoff games in recent memory. The Islanders were firing on all cylinders, and for a team who “can’t score,” they scored a lot. The Isles definitely had some rough spots during this game, but that’s expected when playing a great Hockey team like the Capitals. The Islanders won 40 minutes of Hockey last night, but how, and why didn’t they win all 60?

The Capitals basically pressured the Islanders into giving up a terrible goal in the first period. Alex Ovechkin forechecked, and he was rewarded when he scored off of a slow backhander. Not even a minute in, and the Isles are one down. The rest of this period was really just good pressure by the Isles and some breaks for the Caps.

The Islanders came to play in this period. Nic Dowd commits a penalty, and this leads to something the Islanders never do. They scored on the powerplay. Nick Leddy scores with an accurate slapshot from the point. Not even 2 minutes later, Cal Clutterbuck forechecks which leads to a Scott Mayfield pass to the crease, Matt Martin scores a tap in. A minute later, Derick Brassard leads a rush with Leo Komarov. Brassard passes it to Komarov, and he hits it off the post. Komarov missed a wide-open net. Ovechkin would take advantage of this and tie up the game once again. Finally, Brock Nelson steals the puck from Jakub Vrana and has a 1v1 with Braden Holtby. Fifteen seconds after Ovechkin ties the game up, the Islanders lead by one again.

The last 7 minutes of this period was the best 7 minutes in recent Isles Hockey. Before that, the refs call a silly tripping penalty on Andy Greene, which leads to a blown empty-net chance by Ovechkin. Ovie had the hattrick and the game on his stick and whiffed on it. Greene comes out of the box, and then the Isles dominate 5v5 play. The Islanders at one point got two forward shifts of forechecking off before the Caps could even leave the zone. All this pressure led to JG Pageau wide open, and it was blocked, but it hit Clutterbuck’s hand and the Isles score, 4-2. Finally, after some tremendous 6v5 defense, the Islanders get the puck out, and Anders Lee scores the empty netter.

This was just a really solid effort from the Islanders. The Capitals are the better team on paper, but that will never stop a well-coached, determined team from winning. Game 3 is on at 12 pm EST tomorrow. 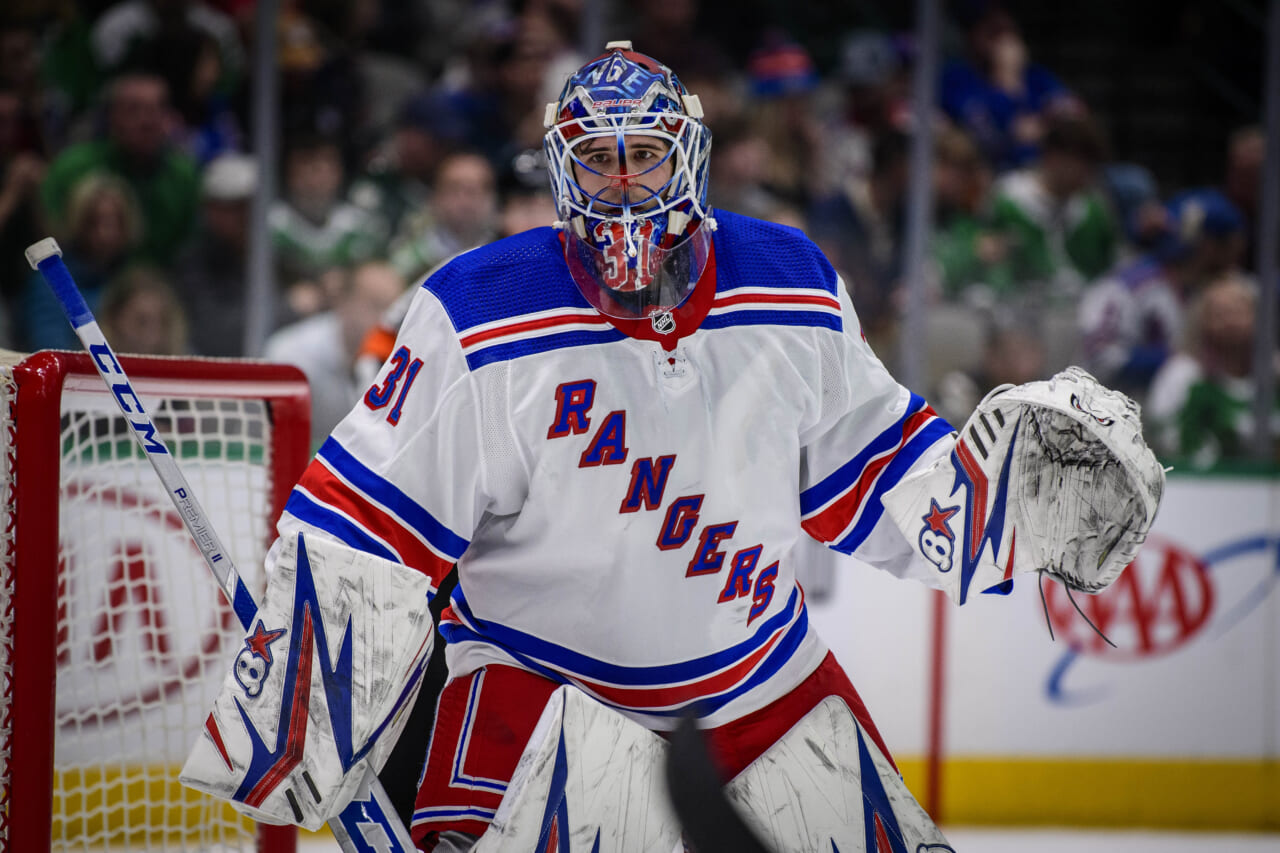 New York Rangers rookie goaltender Igor Shesterkin has been fully focused throughout his career on making it to the NHL and to be named a number one goaltender.

Both of those boxes were checked off this year. In only 12 games (10 wins) Shesterkin has laid down a strong foundation for seasons to come with the Blueshirts.

The 24-year-old now has to overcome two things that he has never battled before.

The pressure on the Russian goalie will be unlike anything he has ever experienced.

The numbers suggest that head coach David Quinn should start a well-rested Henrik Lundqvist. Â He holds a 25-5 record against their opponent, the Carolina Hurricanes, since 2011. This season Henrik was 3-0 against the â€˜Canes.

Hank has 61 career playoff wins and led the Rangers with two victories of a Stanley Cup In 2014.

The numbers can also be misleading with Lundqvistâ€™s game slipping this season. The recall of Shesterkin in January and eventual number-one status put designated Henrik to the back-up position. One he did not want to accept but did so for the better of the team.

Shesterkin Has Earned His Opportunity

Shesterkin deserves a shot to start in the playoffs. He makes the team in front of him better. The rookie’s speed with his glove, Incredible speed post-to-post, and puck handling skills has made teams have to change their attack into the Rangers defensive side of the ice.

To this point, he has shown no fear in the goal. With only 12 NHL games of experience can he be ready to take on the NHLâ€™s best in the Stanley Cup Playoffs?

Shesterkin has playoff experience while he played in the KHL. He has appeared in 16 KHL playoff games with an 8-6 record, 1.91 goals-against average and .919 save percentage. Â As a member of SKA St. Petersburgh, he won the Gagarin Cup.

In the only game, Shesterkin played against the Hurricanes he gave up two goals in a Rangers 5-2 victory in Carolina on Feb. 21. One game does not make a starter in the NHL. Shesterkin lacks one aspect that his backup (crazy to write) does. Stanley Cup Playoff experience along with a first-time playoff coach he may be a little trigger happy to pull Shesterkin early on if things go south fast.

At the end of the day, it’s about winning. There is not much room for error in a best of five series. The decision of who to start or hen to make a change in goal will be decided by David Quinn. How long will he wait for depends not only on the goalie but the team in front of him at the time?

Lundqvist could be a deciding factor before the first game begins. He has been living in Sweden. since the pandemic shit the NHL down in March. The King has been practicing with his brothers Joel team, Frolunda HC. It may not be the same as NHL quality players, but the Frolunda Indians have a good squad with plenty of shooters to keep Hank in shape. He will enter training camp fresh, energetic, and on a mission to get his starting spot back when the Qualifying Round begins.

Shesterkin, for now, will remain in Florida skating with the NHL players like fellow Russian and Washington Capitals star Alex Ovechkin. He will be in game shape when training camp opens on July 10.

This will be the first time in over 15 years that the Blueshirts may have a goalie competition in training camp. The winner won’t necessarily be the same player that may win the third and deciding game against Carolina.

Safe to assume that Shesterkin gets the start in game 1, but its anyone’s guess how much rope Quinn will give his rookie goaltender knowing he has a King looking to take his throne back.