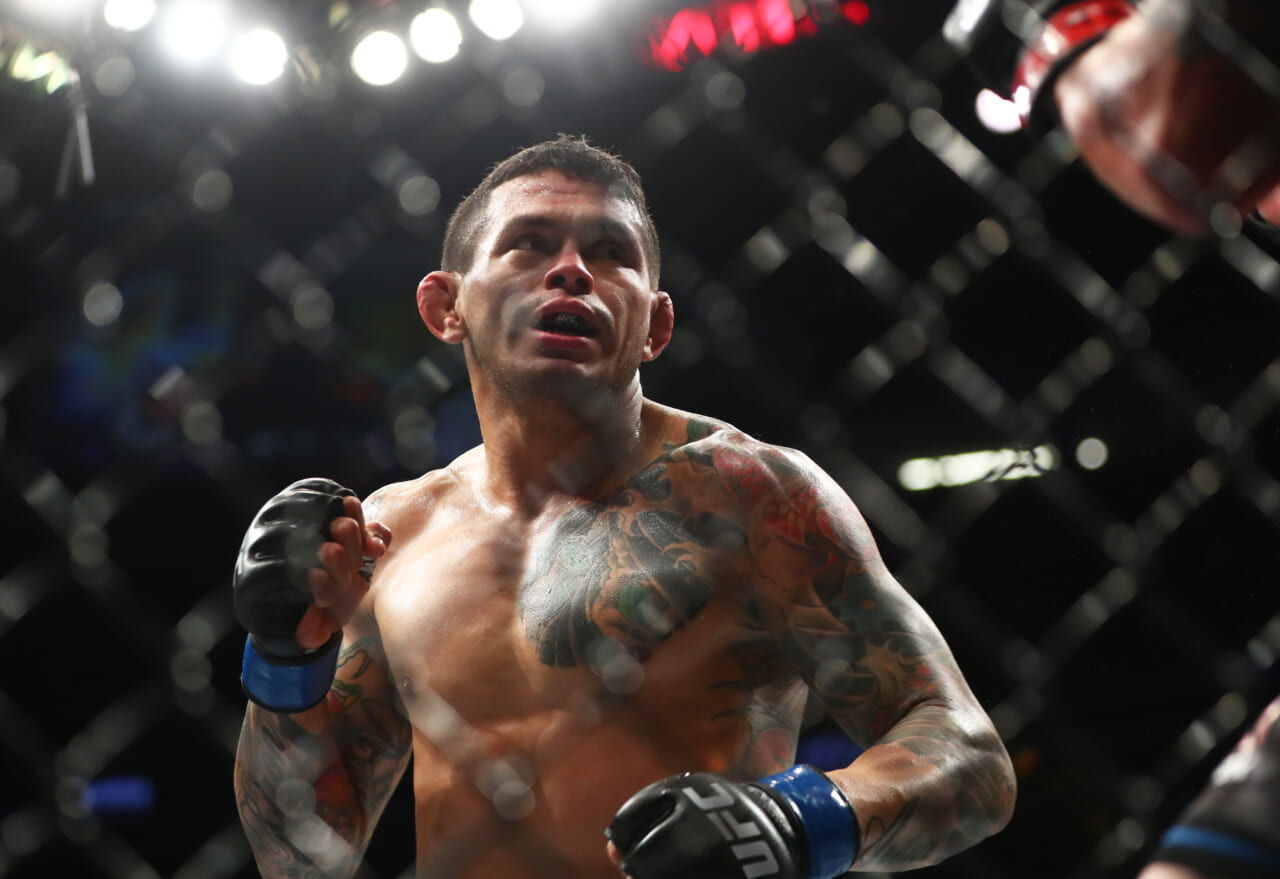 Entering 2021, one of the hottest names in the UFC‘s lightweight division was Diego Ferreira (17-4). Ferreira entered the year having won six fights in a row including a finish over former UFC lightweight champion Anthony Pettis.

In his career, Ferreira had only been defeated by Dustin Poirier and Beneil Dariush. That alone showed people just how good Ferreira was. Back in February, he had his first UFC appearance of the year.

He took on Beneil Dariush in a rematch. Unfortunately for Ferreira, their second fight went a lot like their first. Dariush was able to get the better of the grappling and ended up winning a decision.

Ferreira wanted to get right back in there and the promotion offered him a spot at UFC Vegas 26. He was offered a fight against Gregor Gillespie (14-1) in a big matchup of top fifteen contenders.

Ferreira took the fight and in the first round on Saturday, he looked very good. He was able to hurt Gillespie and get the better of some of the exchanges. However, by the second round, Gillespie started to break him.

One thing leading into last weekend is the fact that Ferreira missed weight by over four pounds. A horrific miss heading into UFC Vegas 26. Ultimately in the second round, Gillespie got the TKO victory. So Ferreira had to give up 30% of his purse and he suffered a TKO loss.

As mentioned, Ferreira rode into the year on the highest of highs. Had he defeated Dariush in February, he could’ve been in the co-headlining spot against Tony Ferguson this weekend at UFC 262.

Instead, Ferreira has lost two in a row and now he’s on the verge of falling out of the UFC’s top fifteen. With that, what should the promotion do with him next? Well for that, I look to UFC 263.

At UFC 263, there’s a lightweight contest between Drew Dober (23-10) and Brad Riddell (9-1). I think a fight with Ferreira and either the winner or the loser makes a lot of sense given their status in the division.

Another fight that could make sense for Ferreira is a matchup with Al Iaquinta (14-6-1). Iaquinta hasn’t fought since 2019, but he’s in a similar spot as Ferreira. Perhaps that’s a matchup the UFC could look at next. 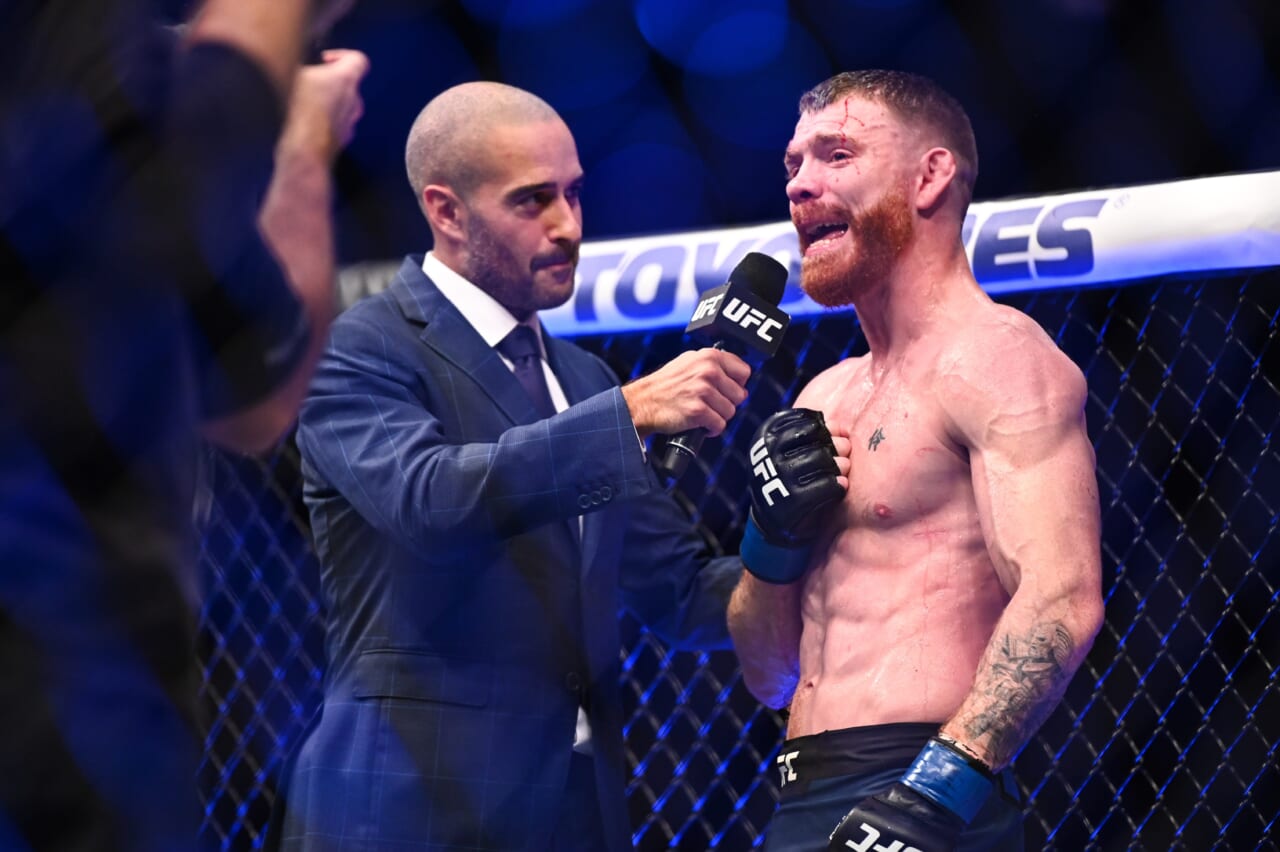 A few weeks ago, Paul Felder (17-6) became the hero at UFC Vegas 14. Islam Makhachev was supposed to headline that card against Rafael Dos Anjos. However, due to staff infection, he had to pull out of UFC Vegas 14.

The card was left without one half of the main event six days before the event. The UFC searched for a replacement and found it at the commentary table. Felder was scheduled to call the action, but decided he would step up for the promotion.

Felder hadn’t fought since February and hadn’t stepped into an MMA gym in months. Admittedly, Felder said that he had somewhat lost the passion for competing. However, he was in shape due to training for a triathlon so he decided to give it a go.

With nothing to lose and a lot to gain, Felder stepped into the main event at UFC Vegas 14. He did come up short against RDA, however, he found that fire to compete again. He said he wouldn’t be going anywhere anytime soon.Â

Just a few days ago, Felder tweeted out that he was ready to go. Now that Felder is ready to jump back in the cage, who should the UFC pair him against. I think the best choice is right there in the top ten with Felder.

I think the perfect opponent for Felder would be Raging Al Iaquinta (14-6-1). Iaquinta is currently the tenth ranked lightweight in the UFC and he’s in a very similar position as The Irish Dragon.

Both men are currently on two-fight losing streaks. However, they are still in the top ten and they deserve a quality matchup in their next fight. Both of these guys love to trade and it would make for a very exciting fight.

When looking at the division, this fight just jumps out at me. Again, they are both in a very similar spot and you know that they’d put on a show for UFC fans. Neither have an opponent at the moment, and I wouldn’t be shocked to see the promotion try to make this happen.

Throughout 2020, fight fans didn’t know if they’d see Paul Felder in the UFC outside of the commentator’s booth. Back in February after he lost to Dan Hooker, Felder hinted that he would probably retire from the sport.

However, Felder never fully closed the door. Less than a week before UFC Vegas 14, one of the headliners in the lightweight division fell out. The UFC was forced to scramble for a last minute opponent for Rafael Dos Anjos.

RDA was making his lightweight return after spending a few years in the welterweight division. The UFC wanted a ranked opponent for his return and Felder was on tap to commentate the fights.

The UFC called upon Felder, and the Irish Dragon took the fight on five days notice. He didn’t ask for a catchweight and he also said he would be willing to go the full 25 minutes despite not having any camp.

The lack of MMA training hurt Felder in the grappling during the fight. RDA’s takedowns and ground control ended up giving him the win, but Felder was incredibly impressive. He looked very sharp and fast on his feet.

Felder took a bunch of good shots of his own, but he busted RDA up on the feet. He outstruck the former UFC champion despite having no camp. After the fight, Felder addressed the fans letting them know that he wasn’t going anywhere.

What’s next after UFC Vegas 14?

“I have not stepped foot into an MMA gym in four months. But I can tell you guys with certainty, I’m not going anywhere right now. I lost my passion for this sport pretty bad, but I’m not done,” Felder told Michael Bisping in his post-fight interview.

Felder saved the day for the UFC and it looks like he found his passion for the sport all in one evening. That is great news for the promotion as Felder is one of the more exciting fighters in the lightweight division.

So the big question is, what’s next for Paul Felder? I think the UFC doesn’t have to look too far around the rankings to find some good potential matchups. I think the promotion could book him against either Diego Ferreira or Al Iaquinta.

Personally, I lean a little towards booking him against Al Iaquinta. That would be a very fun matchup for the fans and both men are coming off of back-to-back losses. However, both are still inside the UFC‘s top ten at lightweight.

Time will tell what the promotion does next with Felder, but it’s nice to know that we will be seeing the Irish Dragon back inside the octagon.