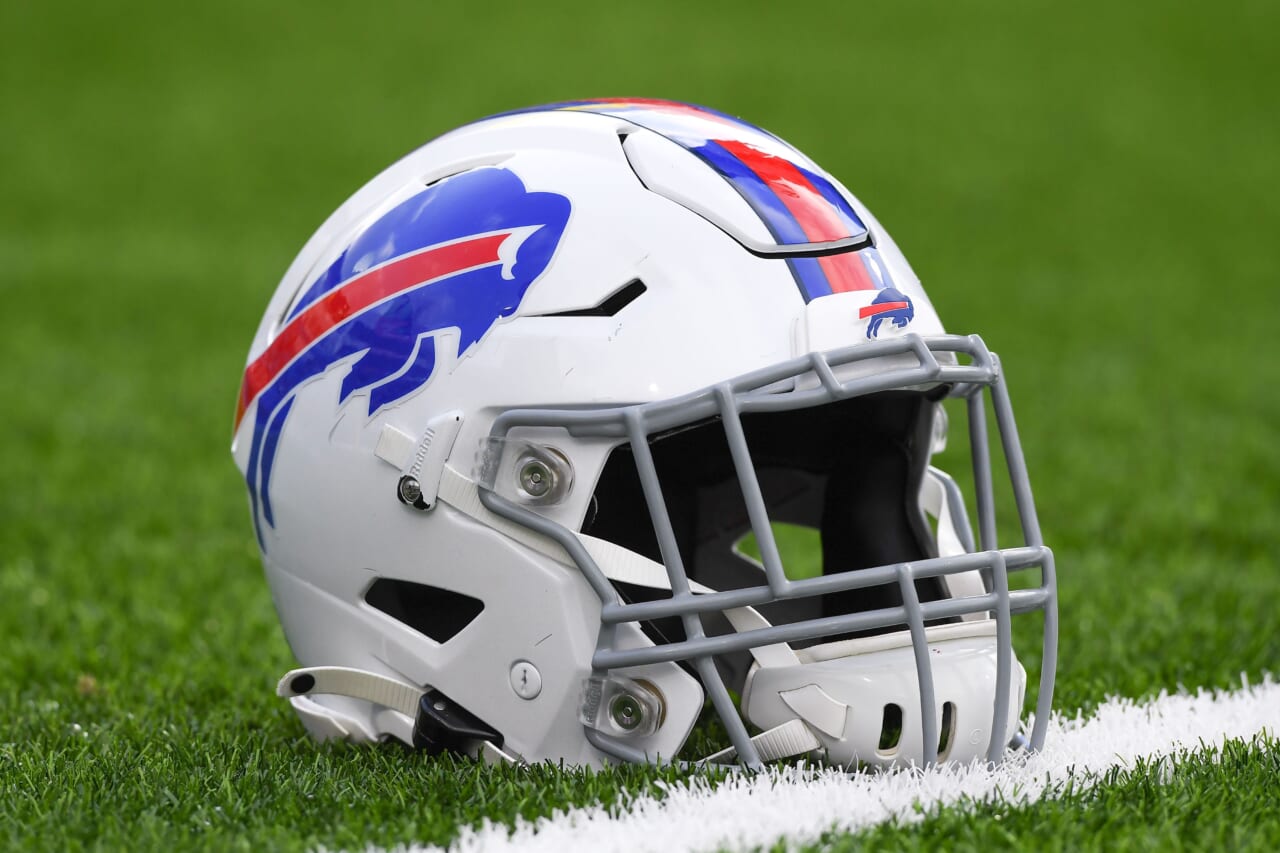 The linebacker becomes the third member of the Buffalo Bills to earn a Player of the Week Award this season.

Buffalo Bills linebacker A.J. Klein had to hold out for a little bit, but a special honor awaited him at the end of Week 12’s NFL action.

The defender earned the AFC’s Defensive Player of the Week for his performance in the Bills’ 27-17 victory over the Los Angeles Chargers on Sunday. Klein led all defenders with 14 tackles (3 for a loss), 1.5 sacks, and a pass breakup. His most notable contribution of the afternoon came in the early stages of the fourth quarter, when he forced Chargers running back Joshua Kelly into a three-yard loss on a crucial third-and-one in the Buffalo red zone. The takedown forced Los Angeles into a field goal that kept the lead at a manageable 24-17 margin.

Klein, 29, is in his first year with the Bills, having signed a three-year deal with the team over the offseason after seven years with Carolina and New Orleans. He struggled in the early portions of the season, but has since come up huge with Matt Milano sidelined due to injuries. Klein previously came up big in Buffalo’s statement win over Seattle, when he earned five tackles, two sacks, and a forced fumble.

â€œI donâ€™t pay attention to any of that stuff. I go out and do what I need to do and try to perform to the best of my ability,â€ Klein said of outside criticism after the Seattle win, per Mike Sherry of The Post Crescent. â€œItâ€™s a good feeling when you go out and perform like this. Big plays cover probably some mistakes from earlier in the first half, but I know I can play football.”

â€œI have all the confidence in myself and I really donâ€™t pay attention to any outward or outside noise. Thatâ€™s one thing in this league you canâ€™t do. You just have to focus on yourself, focus on the process and get the job done on Sundays.â€

In a report from Matt Parrino of Syracuse.com, defensive coordinator Leslie Frazier praised the improvement that Klein has shown in subbing for Milano.

â€œWe didnâ€™t know if A.J. could do some of the things that we ask Matt to do. But as weâ€™ve gotten more comfortable with him and heâ€™s gotten more comfortable in our system, weâ€™ve seen him play some much improved football,â€ Frazier said. â€œThatâ€™s a credit to A.J. just sticking with it and making himself available and then when his number is called, making those plays that are there for him to make.â€

The Bills return to action on Monday night against the San Francisco 49ers in Glendale Arizona (8:15 p.m. ET, ESPN/ABC). 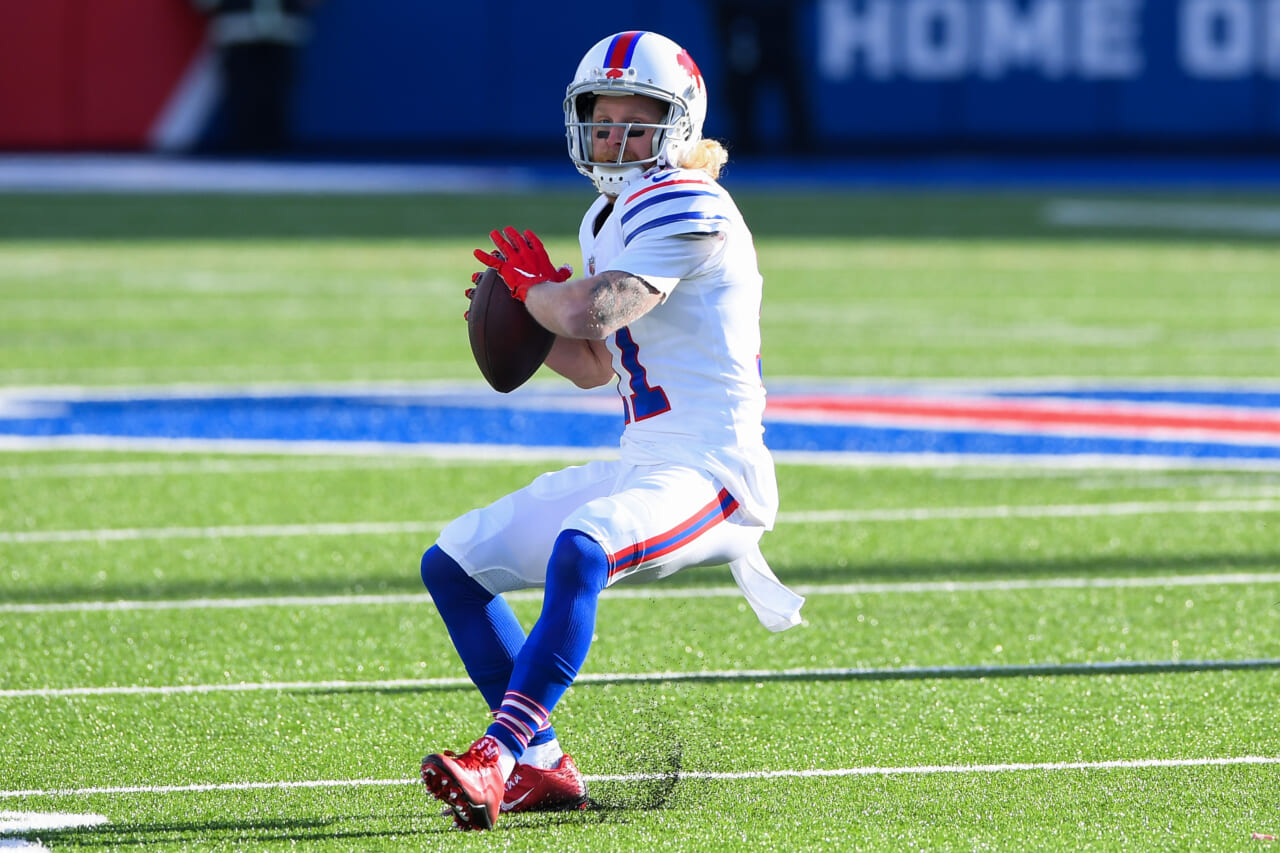 The Buffalo Bills’ rushing offense woke up at a perfect time, as they earned a hard-fought victory against the Los Angeles Chargers.

Trickery and rushing ruled the day for the Buffalo Bills in a hard-fought victory.

Cole Beasley threw a touchdown pass to compliment a 172-yard performance from the run game, which was paced by 82 from Devin Singletary. It was enough to give Buffalo a 27-17 victory over the Los Angeles Chargers at Bills Stadium. The Bills (8-3) has clinched their first pair of non-losing seasons since the 2014 and 2015 campaigns. They maintain a single-game lead on Miami for the AFC East division lead.

No. 11 threw a touchdown for the Buffalo Bills on Sunday, but Drew Bledsoe was nowhere to be found. Instead, it was Beasley launching his first pass since a 2018 attempt at theatrics in Dallas. It was good for his first NFL completion, a 20-yard scoring strike to Gabriel Davis. The Bills have done some strong work with their disease-prevention tactics (often keeping rookie thrower Jacob Fromm in quarantine in case of an emergency), but if they ever face a situation like the one Denver is facing this weekend, they could well turn to Beasley, who served as an option quarterback at Little Elm High School.

Gabriel Davis… my goodness! What to step up with no John Brown today. #Bills pic.twitter.com/af1rk2ATAX

How ironic is it that, one of the weekend of the 10th anniversary of the Steve Johnson incident, that a Bills receiver bearing the No. 13 in a throwback jersey would come through in the clutch? That was Davis, who not only came through on Beasley’s toss of glory, but also on a pair of deep passes that kept Buffalo drives going. Davis has turned himself into quite the day three steal, and has situated himself as a crucial piece of the Buffalo offensive puzzle moving forward. His performance alongside Beasley came up huge on a day when they were missing John Brown due to an injury.

Klein continued his Buffalo redemption story on Sunday, becoming a strong prescience when the Bills needed it most. On the final drive, with the Chargers going for a desperation drive at the end of the game, Klein earned himself a 10-yard sack, combining with Jerry Hughes for another at the end of the first half, one that partly led to a Los Angeles punt. He had three other tackles for a loss on the afternoon, including a big shove of Joshua Kelley on a third-and-one with the Bills holding on to a 24-14 lead. It limited the damage to a field goal, and helped Buffalo keep a lead they’d never relinquish. Klein has shown that his breakout game against Seattle was no fluke and he’ll no doubt be relied on as the season hits its final stages.

The Bills return to action next Monday night against the San Francisco 49ers (8:15 p.m. ET, ESPN) 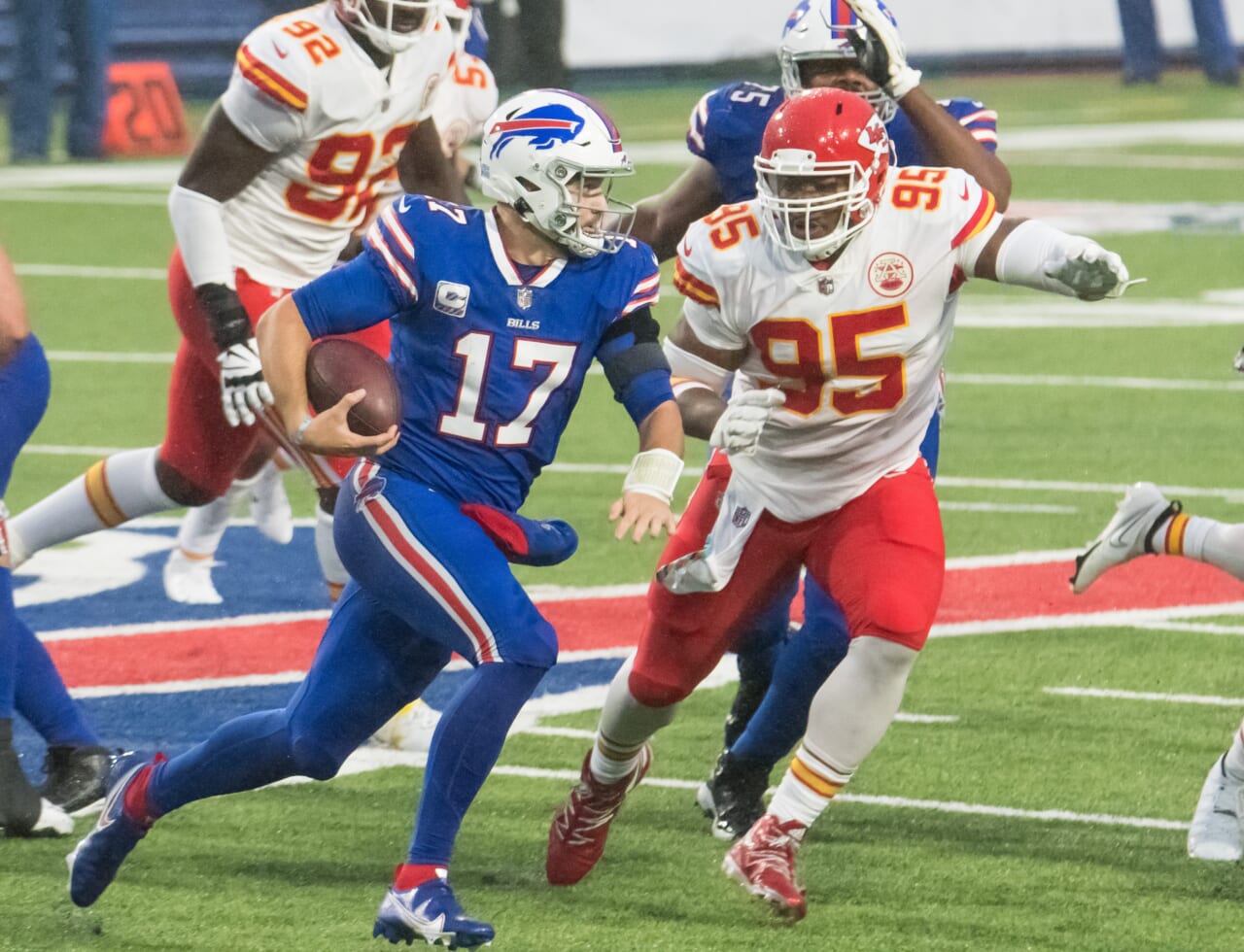 An ugly second half against the defending champions doomed the Buffalo Bills on a rainy night in Orchard Park.

The Buffalo Bills managed to keep Patrick Mahomes mostly in check on a rainy Monday night, but it still wasn’t enough to take down the defending Super Bowl champions.

Clyde Edwards-Helaire put up an infantile career-best 161 rushing yards, pacing the Kansas City Chiefs’ offense on a cold overcast night at Bills Stadium en route to a 26-17 victory in Monday night’s showdown between AFC divisional leaders. Mahomes did contribute to the Kansas City (5-1) cause with two touchdown passes, each to Travis Kelce.

Buffalo (4-2) has now lost consecutive regular season games while at full strength for the first time since 2018 (not counting the season-ending losses at the end of last season, when the Bills played mostly backups in their unsuccessful Week 17 game against the New York Jets).

ESM looks back on the four plays, one from each quarter, that determined Buffalo’s fate on Monday night…

11 yards to @TKelce for his fourth TD of the season! #ChiefsKingdom

If this is the way the Bills’ defense looks without Matt Milano, it might be time to give the veteran linebacker some MVP consideration in absentia.

The Bills knew it would be a tall task dealing with Kelce with or without Milano, but his prescience might’ve at least made things more difficult in the red zone. His physicality and coverage prowess were particularly missed on the Bills’ second defensive drive when Kelce outworked Tremaine Edmunds (whose still working off the effects of a shoulder injury) to score the Chiefs’ first touchdown of the game. It echoed the success Tennessee was able to earn from the tight end spot on Tuesday, as Kelce was able to match Jonnu Smith’s two touchdowns scored in Nashville.

AJ Klein knocked that one right out ðŸ¥Š @AJKlein47 @BuffaloBills

Kelce had three receptions in the first half, each of them playing a major role in the game’s timeline. He scored another touchdown in the second quarter (one that wound up giving Kansas City the lead permanently) and seemed poised for a chance to get another when the Chiefs got the ball back with just a minute to go and all their timeouts on the board. Stationed at the Kansas City 32, Kelce took a Mahomes pass to just about midfield, where he was stripped of the ball by A.J. Klein. Josh Norman was able to pounce on it, giving Buffalo a chance to try a potential tying field before the halftime gun.

While Tyler Bass missed the 52-yard attempt, the play was part of a strong stretch for the Buffalo defense. Not only did the turnover keep things at three points going into the locker room, but they also forced another Kansas City punt on their next drive. What could’ve been a 23-10 deficit remained stagnant at 13-10. For a team facing the mighty defending champions’ high-octane offense on short rest, that’s one of several moral victories gained against a brutal opponent.

With 11:22 to go in the second quarter, the Bills took a 10-7 lead through a 13-play, 75-yard masterpiece that was capped off by a Stefon Diggs touchdown grab. It was a drive that took 6:43 off the game clock…nearly seven minutes without Mahomes, Kelce, Edwards-Helaire, etc. on the field.

But over their next three possessions, Buffalo ran just 14 plays, tallying only 53 yards, and 5:18 on the time of possession clock. Kansas City noticed, taking advantage by showcasing their run game. In addition to Edwards-Helaire’s breakout effort, Darrel Williams and Darwin Thompson united for 43 yards in relief. Williams dealt a crushing blow to a tired Buffalo defense, busting loose for a 13-yard touchdown on a fourth-and-one.

Each of Kansas City’s eight regular-season losses in the Mahomes era has come in games where they lost the time of possession battle. Buffalo failed to fulfill that requirement on Monday, as the offense was on the field for only 22:15.

Penalties have been a bit of an issue (6.6 per game) for the Bills despite their success in the early going. They did manage to play a mostly clean game with only four flags on Monday, including none in the first half.

However, one of them was an unforced error of drastic proportions, a show of frustration that was almost…Jets-ian in nature.

With the Bills down 20-10, Poyer was able to briefly neutralize Edwards-Helaire by stopping him on a screen pass for a loss of two. Had Poyer let go once Edwards-Helaire was forced out of bounds, the Chiefs would’ve faced a third down with seven to go at circa midfield. Alas, Poyer forced Edwards-Helaire out of bounds and slammed him to the ground, drawing a 15-yard penalty and a first down. Kansas City would go on to earn a Harrison Butker field goal, more or less settling things at a two-possession game.

Penalties are going to be an issue if the Bills have any hopes of recovering and moving forward. Their currently per game tally is eighth-worst in football.