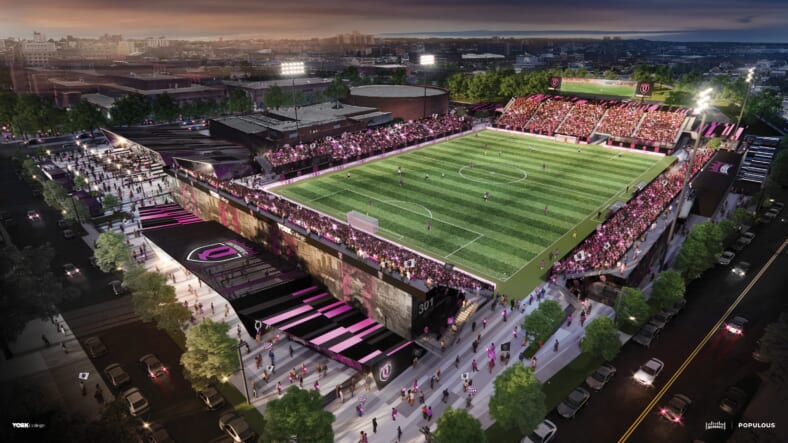 Queensboro FC is taking another major and historic step towards opening up its 2022 inaugural season for the USL Championship. New York City’s newest professional soccer team announced their new soccer stadium at York College in Jamaica, Queens. The stadium will be the first-ever purpose-built stadium, specifically designed for soccer, in NYC’s history.

The new stadium will seat 7,500 people and is in one of the most diverse communities in the state. Populous will partner with QBFC to design the stadium, and they are known for some of the best venues in the world. Wembley Stadium, Emirates Stadium, and Audi Field are just three of their best projects. The new stadium should be ready for action in the Spring of 2022.

150+ different nationalities represent the borough of Queens and soccer is the top sport among all of them. These fans now get to bring their support from the amateur level at Flushing Meadows Corona Park to the professional level at York College.

Get Your Tickets Now

The 1909 Club is named in honor of the Queensborough Bridge, which opened in 1909. This club represents the first 1,909 people to place down deposits for tickets to attend the 2022 inaugural season. The $25 deposit gets fans a lifetime membership and first-rights opportunity to purchase season tickets. Fans can select up to six seats, choose their seat location and use the deposit towards their season ticket plan.

“In 2022,Â QueensÂ will be the epicenter of something positive, fÃºtbol. For a long time,Â QueensÂ has been the soccer mecca for so many of our communities, taking their passion for this sport to our local spaces like Flushing Meadows Corona Park. Now our very ownÂ QueensÂ team, QBFC, will have a home atÂ York College for soccer fans to enjoy their favorite pastime without leaving the borough,” NYC Council Member Francisco Moya said.

The excitement will continue to build with the stadium’s opening just under a year away. Queens has a terrific group of soccer fans, and they will be out in full force during the 2022 season.