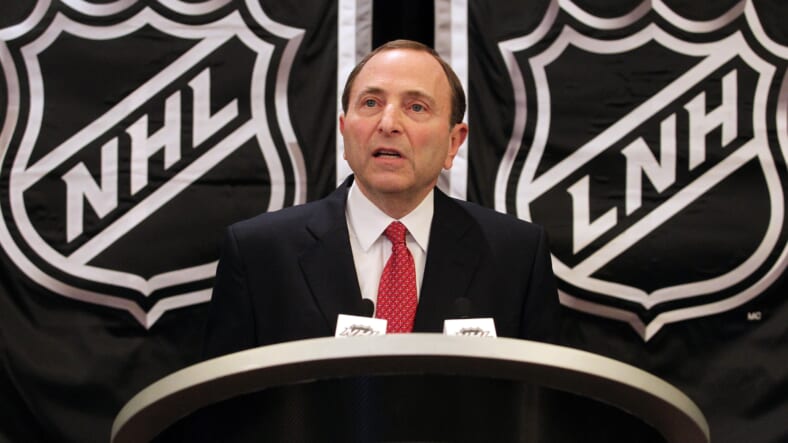 The NHL is looking at multiple venues to play in once the league begins to restart the 2019-’20 season per a report from NHL.com on Monday.

The chatter is beginning to pick up the pace regarding restarting the NHL. Nicholas J. CotsonikaÂ of NHL.com reported on Monday that the league is looking at eight or nine hubs when the season resumes per a comment by Commissioner Gary Bettman.

“I don’t think anybody has a fixed timetable, particularly in North America right now,” Commissioner Bettman said per Cotsonika. He went on to say, “we have been working very hard since we took the pause on March 12 to make sure that whatever the timing is, whatever the sequencing is, whatever physical ability we have in terms of locations to play, that we’re in a position to execute any or all of those options. There is still a great deal of uncertainty.”

The NHL would prefer to use NHL arenas to play the games as they are better suited for multiple games per day and have locker rooms that can handle multiple teams at one time.

Bettman admitted that logistics to restarting the season has become an issue. Players have been quarantining in their home cities and countries since the pause went into effect on Mar.12. The commissioner admitted that 17 percent of the league’s players were outside of the United States.

The league will also need plenty of hotels for players and for COVID-19 testing so that it doesn’t interfere with the testing of the general public.

“I am told that there can be enough capacity, and certainly, over the next couple of months, there will be more capacity,” Commissioner Bettman said. “But that is a fundamental question, and we certainly can’t be jumping the line in front of medical needs.”

The NHL has yet to determine if they will finish out the regular season or go directly into the Stanley Cup Playoffs at the moment. He is aware that fans have a vested interest in this season as he would like to see the regular season completed before the playoffs begin.

Bettman has had no intention of canceling the season and believes that over time sports will return “stronger than ever.”

As exciting as it is to talk about games the pandemic still has everyone involve playing the wait and see what happens game. The health and safety of the players and people, in general, are more important than a return of sports.