Tim Tebow is reportedly back in the NFL, and that’s perfectly fine 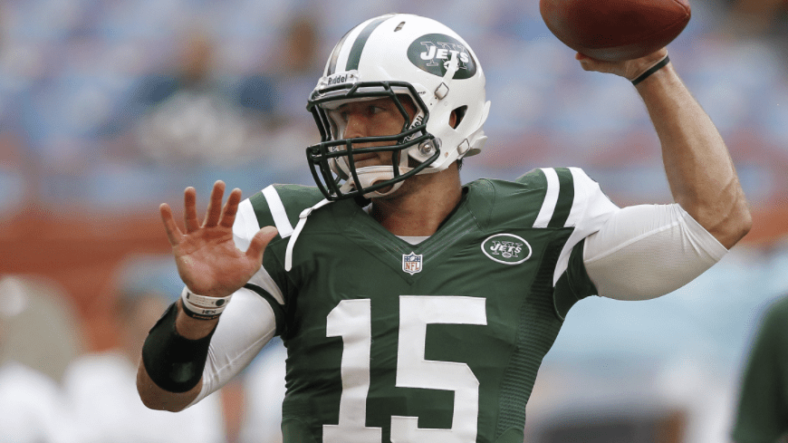 Questions can be raised about Tim Tebow’s NFL comeback, but it’s fair to give him one last chance in a new role.

Tim Tebow more than likely won’t be getting a video tribute on the MetLife Stadium videoboards this fall. It remains to be seen whether Tebow will be on the Jacksonville Jaguars’ 53-man roster when Duval County’s finest hit the road to battle the New York Jets. For now, however, it appears that the 2007 Heisman Trophy winner, two-time college football national champion, and overall accoladed quarterback will spend at least a little time in teal and back.

Reports from Tom Pelissero and Ian Rapoport of NFL Network reveal that the 33-year-old Tebow will attempt to resume an NFL career that fizzled out in 2015. Tebow reunites with his college coach Urban Meyer, the two previously having united for collegiate fireworks at the University of Florida, but with plans to move to tight end while 2021’s top overall pick Trevor Lawrence assumes the franchise quarterback role.

Tebow has not partaken in a regular season football game since December 2012, when he played a single drive in an ugly showdown with the Jake Locker-led Tennessee Titans onÂ Monday Night Football. The 14-10 slog is perhaps best known for five Mark Sanchez turnovers and eliminating the Jets from playoff contention.

Tebow’s reported rearrival has sent shockwaves at a rare dull period on the football timeline. Per ESPN’s Jeff Darlington, “not everybody (in Jacksonville’s building is thrilled” about the potential Tebow deal. The debate over Tebow’s NFL inclusion has continued amongst observers and analysts.

Some are interested to see what Tebow can do at tight end, a transition that has been debated ever since Tebow was preparing for the 2010 draft. Others have had their fill of Tebow, including New York sports fans who have now seen him invade both their football and baseball circles, as Tebow’s new NFL beginning stems from the end of a minor league baseball career in the New York Mets’ system. More observers wonder why Tebow has been invited back to the NFL while another polarizing quarterback, Colin Kaepernick, has not.

One can fully wonder why Tebow, whose last official football action is a 2015 training camp stint in Philadelphia, was invited back. A common argument against the reinsertion of Kaepernick, having moved onto activism and a partnership with Nike, is that it would cause too much of a media frenzy, though Tebow’s signing has caused quite a stir as is…even without an official announcement from the Jaguars. These are all fair questions to ask, debates to be staged.

But when it comes to Tebow the individual, it’s fair to grant him what likely amounts to a final professional football opportunity.

For one thing, a regular season roster spot is anything but guaranteed. Jacksonville is currently equipped with five tight ends, including fellow two-sport star and former Carolina Panther Chris Manhertz (previously a three-year captain with Canisius’ basketball team), fifth-round pick Luke Farrell, and veteran re-signee James O’Shaughnessy. Tebow’s going to need to earn his way onto the Week 1 roster, and it’s an uphill battle in a role he has never played.

Succeeding in unfamiliar roles has been something Tebow had gotten used to during his baseball career. It’s fair to say that Tebow was never destined for Queens, but he managed to put up respectable numbers, particularly at the AA level in 2018 (.273, 6 home runs, 36 runs batted in with Binghamton). Those numbers could’ve been well inflated by the end of the year (on a roster that included current Mets slugger Pete Alonso) had Tebow not suffered a season-ending finger injury.

Those numbers did plummet once Tebow moved onto the AAA level. His most recent baseball travels…time in the Mets’ shortened spring training proceedings…weren’t pretty (.154, six strikeouts in 18 plate appearances), but he did manage to go out on a relatively high note, hitting a home run off MLB veteran Alex Wilson in a spring training tilt against the Detroit Tigers.

One could argue whether Tebow was used as a sideshow of sorts, a cog in the “Same Old Mets” machine. But the baseball player that hadn’t played competitively since 2005…his junior year of high school…made it clear to his observers that he was serious about this trial, no matter the challenges thrust upon him.

“What heâ€™s doing and the strides Iâ€™ve seen him make from last year to this year, thatâ€™s impressive,” then-Binghamton pitching coach and 1988 Cy Young Award winner Frank Viola told Rob Centorani of The Press & Sun-Bulletin in 2018. “He doesnâ€™t have to do this, but he chose to do it and heâ€™s working as hard as anyone, if not harder. Itâ€™s a great story but very difficult.

â€œThereâ€™s so much instinctual stuff from baseball that you learn as a kid all the way up. When you take a hiatus like he did, itâ€™s hard. Heâ€™s 30 years old, but heâ€™s still trying to learn.â€

Adding to Tebow’s current football cause, and why it shouldn’t matter on a broader NFL landscape, is that Jacksonville is a team with relatively little to lose. They’ve chosen in the top ten in all but one of the past 14 NFL Drafts, their one shining moment being a “stolen” Super Bowl appearance in 2017. If Lawrence doesn’t pan out, he simply lands in the same category as other false throwing saviors like Blake Bortles or Blaine Gabbert.

In other words, it’s the perfect place for Tebow.

Unlike his arrival to a Jets team on the decline in 2012, one mired with questions at quarterback at the end of the Sanchez era, Tebow is under no pressure to switch things up immediately. That Jets squad was one tailor-made for the rise of the social media era, one packed to the brim with personalities, none more boisterous than their head coach Rex Ryan. It was there Tebow resided while at the height of his professional powers.

Tebow, of course, was coming off a year as the Denver Broncos’ primary quarterback after they chose him 25th overall in the 2010 selections. His box scores weren’t always pretty and he had the services of a budding dominant defense featuring future Super Bowl champions like rookie Von Miller. He did, however, often manage to work with what the defense gave him and contribute to the final score in the process. That trend was prominently on display in a November win over Kansas City, when Tebow completed only 2-of-8 passes in a 17-10 triumph over the Chiefs. He was nonetheless responsible for two Denver scores, running in a seven-yard tally before hooking up with Eric Decker for a 56-yard de facto winner in the fourth quarter.

Yet, Tebowmania grew through a series of uncanny, unconventional fourth quarter comebacks, one of which was achieved in a Thursday night thriller against the Jets. A jaw-dropping 95-yard scoring drive to end a nationally televised tilt served as Tebowmania’s outbreak and fueled Denver to the AFC West title. The Broncos even earned a playoff win over Pittsburgh…one that ended with Tebow finding Demaryius Thomas for an 80-yard overtime score…before the New England Patriots did New England Patriots things in the Divisional round.

That season should’ve proven that Tebow had the skill and talent to serve as a capable, serviceable quarterback in the NFL…a Chad Pennington/David Garrard type worthy of building a solid career in the league. But when the legendary Peyton Manning became available, Denver had no choice but to make the switch and prematurely end Tebow’s days as a long-term franchise quarterback.

The subsequent trade to the Jets (sending two draft picks out to the Rocky Mountains) came at the worst possible time for a young quarterback…one already attracting caravans of cameras due to his collegiate career and public religious displays…trying to find his NFL place. What resulted was a volatile mix of coverage, silliness, and excess, trends only exacerbated by the rise of “embrace debate” culture that continues to dominate modern sports media.

To their credit, the Jets often spoke of using Tebow in non-conventional settings, almost becoming a Taysom Hill-type player before the latter left his mark on New Orleans and the league as a whole. Alas, the Jets were never able to implement Tebow the way they wanted to. He was used mostly on special teams and through the Wildcat offense, but it didn’t stop observers’ insatiable appetite for Tebow coverage.

Even though Tebow had fleeting flashes of New York brilliance…he converted a 23-yard fake punt using his trademark jump pass as a personal protector in a win over Indianapolis…the Jets failed to consistently work him into their system. Several players later anonymously ripped Tebow and eventually, it became too much trouble to keep a backup quarterback with that kind of baggage. He was released by the Jets the following year and failed to catch on to a 53-man roster after training camp stints with New England and Philadelphia.

“He’s done nothing wrong,” Edwards said to Jim Corbett. “All he’s done every day is come to work, and he’s working hard every day. And they blasted the guy. Like, really? I could see if he was playing.”

Now, the cycle begins anew in Jacksonville, an ideal place for Tebow to create something new of an NFL career. It’s downright peaceful compared to New York and he won’t be relied upon to win games or turn the tide. In addition to Lawrence, the Jaguars are packed to the brim with young talent acquired through drafts past and present.

Again, there are certainly questions to be raised about how and why Tebow will make it back to the NFL. But it isn’t fair to level those quandaries against him personally. One can certainly question the sense of cronyism that seems rampant through professional sports…just look at how many retreads appear in head coaching spots during the annual winter searches…but it isn’t fair to question Tebow’s work ethic and dedication to his craft. If the Jaguars’ biggest problem is having Tebow…whose foundation has been remained active in off-field issues like human trafficking…on their roster, that would bring about welcome normalcy to Duval.

Questions can be asked about the details of this situation, and rightfully so. But one look at Tebow’s sporting career shows that if he does make it Jacksonville for Week 1…and makes that appearance against the Jets in East Rutherford…it will be earned.