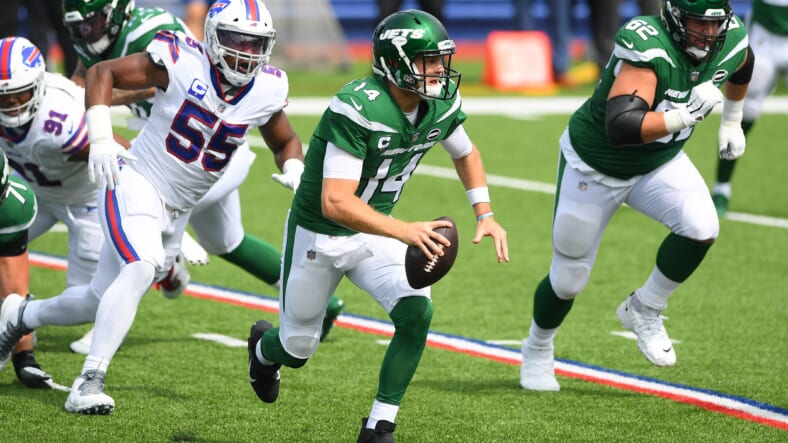 One of the New York Jets’ games against Miami has been moved up to next weekend, as the league makes changes during the health crisis.

Great @NFL games happening now, more to come. A look at schedule changes for the weeks ahead. pic.twitter.com/r60l7KwgG0

The future of the AFC East took a major shift on Sunday, as both the New York Jets and Buffalo Bills are affected by the NFL’s continuing attempt to navigate its way through the ongoing health crisis. Eight games in total have been affected by positive COVID-19 tests emerging from New England and Tennessee.

As of press time, the Bills’ Week 5 tilt against the Tennessee Titans is scheduled to go on in its Tuesday slot (7 p.m. ET, CBS) after being moved from Sunday. Tennessee revealed on Sunday that they saw another positive test, forcing another shutdown of their Nashville facility. The Titans have now had 24 positive tests in their organization since September 24.

Consequently, the Bills’ Thursday night game against the Kansas City Chiefs has been moved to October 19, the Monday night of Week 6. That game will remain shared between Fox, NFL Network, and streaming service Amazon Prime with kickoff slated for 5 p.m. ET.

These new changes also affect the Jets, who will now face the Miami Dolphins much earlier than anticipated. The first meeting between the divisional rivals moves up to next weekend with a Sunday kickoff on October 18 (4:05 p.m. ET, CBS). Miami was originally scheduled to take on the Denver Broncos, but the latter’s matchup with the Patriots was instead moved to Week 6 instead. New England and Denver were originally scheduled for Week 5’s Sunday late slot, but they were later moved to Monday. However, Week 5 now serves as de facto Broncos bye week, as they’ll now play the Los Angeles Chargers on their original open date. Miami and Denver’s meeting now moves to Week 11.

Another Jets game affected by the movement is their original Week 6 date with the Chargers. That one now moves to Sunday, November 22, when they originally were set to take on the Dolphins.Â Jacksonville’s visit to the Chargers in Week 8 has been moved to October 25 during Week 7’s action (4:25 p.m. ET, CBS).