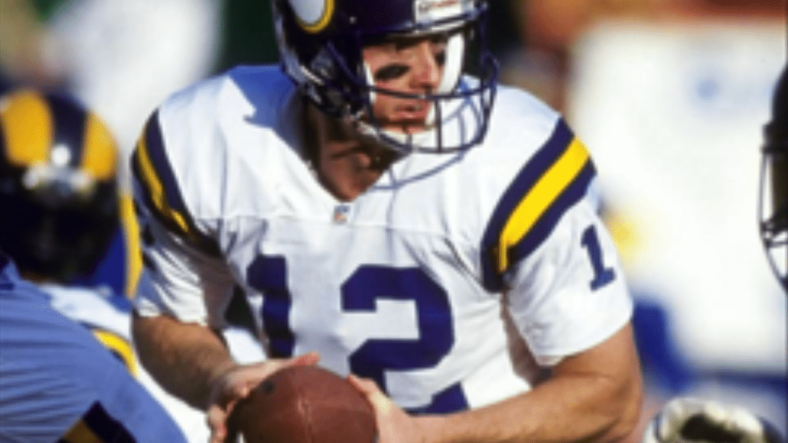 Former NFL quarterback and current analyst Sean Salisbury has been in the game for decades. He spoke with ESM about the game’s modern affairs.

(Special thanks to Pickswise for making this interview possible)

Former professional quarterback Sean Salisbury has worked alongside several renowned teammates. He was protected by future NFL Hall-o-Fame Bruce Matthews during his freshman season at the University of Southern California. He, Roger Craig, and Cris Carter were part of the Minnesota Vikings’ offense in the early 1990s.

But perhaps the most fun Salisbury has had in his career came with a more-or-less fictional teammate…Adam Sandler.

After a decade in professional football, Salisbury made a return to the national spotlight at the turn of the century through an analyst and contributors’ role on ESPN’s NFL coverage. A trip from Bristol to Hollywood later came when Sandler began production on his 2005 remake ofÂ The Longest Yard, as Salisbury was called upon to oversee the football aspects of the film. Sandler also made the transformation from comedian to professional quarterback Paul Crewe (the role popularized by Burt Reynolds in the original 1974 film) thanks to Salisbury’s tutoring. Salisbury also held a small acting role in the film, joining then-ESPN colleagues Dan Patrick, Chris Berman, and Jim Rome.

Speaking with ESM, Salisbury referred to Sandler and his group at Happy Madison Productions as “some of the best people I’ve ever met”. He remains good friends with Sandler would later appear in two further Happ Madison films (The BenchwarmersÂ andÂ The House Bunny)Â

“I’ve been fortunate to play at a big university, in a great rivalry between Notre Dame and SC. I was fortunate to be on a network where you’re on TV and you get to doÂ SportsCenter. You’re on the radio, or you play quarterback in an NFL playoff game,” he said in reflection. “The Sandler stuff, the Happy Madison stuff fits right in. You’re out of your element in the acting world! I gained a great appreciation for the hurry-and-wait business and why they make the money they do. A two-minute scene takes a day to film or six hours. They give you your own trailer, and I was like ‘this is really cool!’.”

Salisbury’s current endeavors have placed in Houston, over two decades after he spent a brief stretch with the city’s Oilers, where he hosts the morning drive show on KBME (790 AM). He’s also set to pursue a Masters Degree at Texas A&M University, beginning the endeavor in the upcoming spring semester.

Football continues to play a large role in his life, especially with KBME carrying rights for the gridiron programs of both Texas A&M and the University of Houston. His decade of professional exploits took him through the NFL ranks of Seattle, Minnesota, Houston, and San Diego, as well as a two-year tour of the Canadian province of Manitoba, where he helped the CFL’s Winnipeg Blue Bombers capture the 76th Grey Cup. Salisbury threw the only Bomber touchdown pass in a 22-21 victory over the BC Lions.

In his conversation with ESM, Salisbury was quick to take note of how much the game has changed since his playing days. Unlike many modern observers, Salisbury doesn’t think the quality of athlete has changed, nothing that he played with and against several world-class contenders like Deion Sanders, Troy Aikman, and John Elway (though he notably expressed fascination with current Tennessee RB Derrick Henry and Seattle WR D.K. Metcalf).

Rather, Salisbury is intrigued by the modern innovations to the “X’s and O’s” side of the game, praising coaches for changing their approach to game planning and scouting.

“I think the state of the game, when it comes to the X’s and O’s of it, I love it because people are thinking outside the box. We’re doing underhand passes, shovel passes. We’ve got the Kyle Shanahans, the Andy Reids, the Sean McVays of the world who are elevating,” Salisbury noted, also praising the work offensive coordinator Greg Roman is doing with Lamar Jackson in Baltimore.

In a bit of a gridiron twist, Salisbury’s qualms with the modern game come with the advent of rules that appear to cater to his former position of quarterback. Last season, an average of 4.25 flags were thrown for roughing the passer flags per game, a league-record.

Salisbury thinks the de facto coddling, which he labels as “too protective”, may go a little far. It also causes defensive players to get “hosed” in the process.

Salisbury also criticizes notes that quarterback penalties seem to primarily focus on hits to the head, with not as much regard paid to lower hits. He nonetheless expressed the importance of dealing with and praised the progress of diagnosing head injuries, having lost close friend and former San Diego Chargers teammate Junior Seau to suicide after a career of such trauma.

If the radio endeavors cease for Salisbury for whatever reason, quarterback-turned-motivational speaker would be quite the second career. He believes that football can teach its participants unforgettable life lessons.

“It’s a great sport. To me, it’s the greatest parallel of life. You get your butt handed to you, and then you get back up and go get yourself some more,” he said. “In life, you get knocked in the face, kicked to the canvas, and then you have two choices: either you get up and go get yourself 70 plays a game, or somebody else does. In life, life passes you by, because you’re going to get kicked in the teeth.”

Salisbury credits the sport for giving him both a career and a “post-career” as well, as he continues to remain active in the game through KMBE.

“I think in the parallel with professional football, or college, high school football, you learn how to be a good teammate, learning how to be a good teammate, a good person, help your buddy, yet still do your job. It parallels real-life more than any sport on the planet, period. I don’t think it’s close. I love that. You can have the quarterback playing well, but, if you don’t block for him, it doesn’t work. In basketball, if a superstar is having one of those days, like Michael Jordan, the other four dudes might not be playing as well, but I’ll still win because Jordan’s that good…get up, get punched in the face more. Know you’re going to get punched in the face more. That’s life. Then when you succeed at it, it’s the greatest thing in the world. But you never stop getting better or dealing with it.”

Salisbury was willing to put aside his Texas duties to look at things from a New York perspective, eager to parlay some advice on the area’s woebegone local teams. His lone experience with metropolitan football came during the 1993-94 NFC playoffs, when he relieved Jim McMahon in the Vikings’ wild card tilt against the Giants.

1992 Season finale vs Green Bay has a little of everything. A young Keith Olbermann, Sean Salisbury running, then passing for a TD to future Vikes coach Mike Tice. A Terry Allen run, Vikes knock Favre & GB out of the playoffs. @TonyDungy @KeithOlbermann @SeanUnfiltered #vikings pic.twitter.com/iMg5fnRH3O

Returning to the postseason any time soon might be a tall task for both squads. The Giants may have a bit of temporary hope with their 2-7 record actually positioning them well in the garish NFC East.Â  Their green counterparts, on the other hand, are the NFL’s only winless team at 0-9. Each may have a decision to make at their quarterback spot, where Daniel Jones and Sam Darnold are respectively fighting to maintain franchise status. Perhaps siding with his passing brethren, Salisbury was quick to note that the Giants and Jets’ modern struggles are not entirely on the men under center.

“I think both are in similar situations,” Salisbury said. “On both teams, they’re still figuring out who’s going to lead the franchise. When I talk about the Steelers, the Patriots, the 49ers, the Cowboys of old, the Chiefs, the staple franchises, what do they all have in common? The continuity in the front office.”

“Unfortunately, there just hasn’t been a lot of continuity there. In fact, that’s true about a lot of New York teams. The Knicks haven’t had any. The Yankees have some. They’re always going to be good, but with Joe Torre, they had that continuity. There’s always going to be competitive, they have players. If you have a great quarterback and a great head coach, a great leader of men, things go from there.”

In that department, Salisbury believes the Giants haven’t had the proper leader since Tom Coughlin’s departure after the 2015 season.

But, putting his GM cap on, Salisbury said that if the Jets wind up with the top overall pick…and they’re well on their way to doing so after Monday’s last-second loss to the New England Patriots…he believes that the Jets must take Trevor Lawrence, the consensus top choice out of Clemson. But if the Jets must bid Darnold farewell, he maintains hope that his fellow former Trojan can make an impact in this league, if he breaks away from the tutelage of head coach Adam Gase.

“If they get the first pick, you have to take Trevor Lawrence,” he said. “Sam Darnold is going to go somewhere when that happens, and he’s going to be a success. That city, unfortunately, hasn’t gotten to see the best of Sam Darnold because he’s a player. I’ve talked to 10 or 12 people smarter than I am…not one of them think Sam Darnold’s a bust.”

“It starts with the leadership and the coach. And I don’t think, with the Jets right now, it’s where we want it to be.”